Caged Bird’ brings the series to a close with a hostage crisis at Wonderfalls and with Jaye and Eric trying to cope with “goodbye” after Heidi arrives to take Eric home to New Jersey. While trying to escape police, an armed robber ends up trapped in the gift shop and takes Jaye, Sharon, Alec, and Wade (the mall security guard) hostage. Jaye is continually encouraged to bolster Wade’s confidence, which leads to him having a heart attack while attempting to bludgeon the robber with a souvenir paddle. As the robber grows increasingly desperate, the animals tip Jaye off to an escape route through the bathroom. The robber takes her along to protect himself, but ends up getting killed by an ambulance speeding to the scene. Ultimately, the deceased robber’s heart goes to the security guard, saving his life, and Eric and Heidi split up, leaving Jaye and Eric free to be together at last!

The frustrating, heartbreaking torture of the last run of episodes finally comes to an end as Jaye and Eric are united at long last! I’m thrilled we got to close on a “happily ever after” note for our favorite, star-crossed, not-yet-lovers. I like to imagine the two of them growing old together, keeping busy with hilarious and vague mission directives from Jaye’s animal voices. Setting the Universe to rights with trusty sidekicks Mahandra and Aaron, and with the hapless Sharon inadvertently helping out or getting screwed over, depending on the week. Oh, and the team always makes time for family breakfast and family game night at the Tylers. Dreamy sigh.

This episode was also a solid hour of entertainment, with good misdirection and multiple interpretations for Jaye’s missions, plus loads of great character interactions. Sharon comforting Jaye in the manager’s office. Aaron inviting Mahandra to his parents’ anniversary dinner as his date. Mahandra giving in to her feelings by kissing Aaron in public. Eric and Jaye in all their goodbye scenes and the wonderful “hello!” scene at the end. A great epsiode that sadly became the last episode of the show. 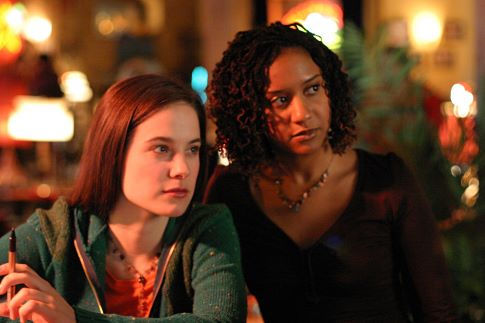 “Wonderfalls” was one of those outstanding cult shows that burn bright and briefly — it lasted only four episodes before being yanked, with nine unaired in the usa. Now fans of this cult show are rewarded with the full series, in all its witty, quirky glory. Twentysomething Jaye Tyler (Caroline Dhavernas) is an underachieving slacker. She has a philosophy degree from Brown University, but now works as a shopgirl at Niagara Falls and lives in a trailer. Needless to say, her ultra-successful family finds this galling and disturbing, even though they themselves are far from the Cleaver clan — her sister Sharon (Katie Finneran) is a lesbian, her parents are splitting, and her brother is just a weirdo.

Then weirder things happen to Jaye. Suddenly toys are talking to her, and prompting her to help the people around her — returning purses, dealing with ghosts, helping an old enemy from high school, and deal with a long-dead Indian girl. Following the instructions of her “muses,” Jaye begins to learn a few things about other people, and the quality of kindness. It’s an unusual idea for a TV show — an embittered young woman hears “muses” talking to her, including a stuffed lizard, lawn flamingos and a brass monkey. Most people would just check themselves into a padded cell, but that doesn’t make for scintillating TV watching. So instead, it becomes a deeply warped inspirational series.

What sets it apart from other series is the surreal touch and wicked sense of humor. It’s never made clear why Jaye hears toys and bookends talking cryptically to her — is it God? Aliens? Her own mind? Pantheistic souls in everything? Nothing is made specific, which makes it all the weirder and more intriguing — especially since the toys give her advice even when she doesn’t want it. And the humor can be beyond weird, but is always funny, such as Jaye arguing with a cow creamer (shades of P.G. Wodehouse?) that she doesn’t want a pancake. Another example is a solemn, intense moment after she scatters a deceased person’s ashes…. and promptly gets fined for littering. The dialogue is witty and well-written — not in a laugh track way, but in a smile-and-chuckle-softly way.

Caroline Dhavernas does a phenomenal job as Jaye. She narrowly avoids the sullen teen/twentysomething cliche, making Jaye’s dissatisfaction with her family and life seem realistic. She can be nasty and incisive and angsty, but can also be sweet and even vulnerable. The supporting cast, such as nice-guy bartender Eric (Tyron Leitso) and Jaye’s bizarro overachiever family, are surprisingly well-rounded for such quirky characters. “Wonderfalls” is destined to remain a cult hit — delicate, weird and thoroughly original. It didn’t last long, but now everyone can enjoy what there was of it. Absolutely wonder-fall.