In 1905 Kansas, Oscar Diggs works as a magician in a traveling circus. An inveterate womanizer, Oscar flirts with the circus strongman’s wife, and the strongman threatens him. Oscar escapes in a hot air balloon, but is sucked into a tornado that takes him to the Land of Oz. There, he encounters a kind and naive witch, Theodora. She believes him to be a wizard prophesied to destroy the Wicked Witch who killed the King of Oz and take his place; the idea of being an immensely wealthy monarch makes him immediately accept. En route to the Emerald City, Theodora falls in love with Oscar, though he does not reciprocate her feelings. They encounter the flying monkey Finley, who pledges a life debt to Oscar when he saves him from a lion. Oscar reveals his deception to Finley along the way, forcing him to help maintain the lie that he is the ‘Wizard’, much to Finley’s irritation.

At the Emerald City, Oscar meets Theodora’s older sister Evanora, the Royal Advisor. Evanora tells him the Wicked Witch resides in the Dark Forest and can be killed by destroying her wand, the source of her powers; only then will Evanora consent to make him King of Oz. Oscar and Finley are joined en route to the forest by China Girl, a young, living china doll whose village and family were destroyed by the Wicked Witch. Oscar fixes the China Girl’s broken legs with glue. They reach the forest and retrieve the wand, but they discover the “Wicked Witch” is Glinda the Good Witch who identifies herself as the daughter of the late King, revealing that Evanora is the true Wicked Witch. Evanora sees this with her crystal ball and tricks Theodora into thinking Oscar is trying to court all three witches. She offers the heartbroken Theodora a magic apple that she says will remove her bad feelings about Oscar; Theodora bites it and realizes that Evanora had been deceiving her, before she is transformed into a monstrous, green-skinned version of herself. Glinda brings Oscar’s group to her domain in the south of Oz to escape Evanora’s army of Winkies and flying baboons. She confides to Oscar that she knows that he’s not really a wizard, but still believes he can help stop Evanora. As he reluctantly takes charge of an “army” of Quadlings, Tinkers, and Munchkins, Theodora enters Glinda’s domain and angrily reveals her new, hideous appearance to Oscar. She threatens to kill him and his allies with the Emerald City’s well-prepared army. Oscar despairs of his chances. After telling China Girl about the exploits of his hero Thomas Edison, he conceives a plan that relies on trickery and makes preparations with Glinda and the Munchkins.

Glinda and her subjects mount a fake attack on the Emerald City using an army of scarecrow puppets whose true nature is hidden by thick fog. The witches are tricked into sending their Flying Baboons through a poppy field that puts them to sleep. However, two of the Flying Baboons and Evanora capture Glinda, but cannot find her wand, which was taken by China Girl. Glinda is then brought to the city square and chained. Oscar infiltrates the Emerald City with his allies, but appears to abandon them in a hot air balloon which he loads with stolen gold. Theodora destroys the balloon with a fireball, but Oscar was never actually in the balloon. As the Wicked Witches prepare to kill Glinda, Oscar secretly reveals his engineered death to his friends. Using a hidden smoke machine and image projector, he presents a giant image of his face amid smoke and flame as his “true form”, and calls upon “the stars themselves” (a fireworks display) to intimidate the Wicked Witches. Evanora fearfully hides in the castle, while Theodora eventually flies off on her broom after her attacks fail to hurt the “invincible” wizard. Oscar calls after her, telling her that she is welcome to come back if she overcomes her wickedness, but Theodora screams defiance at him and flies to the west, leaving Oscar saddened. China Girl frees Glinda, who engages in a magical duel with Evanora in the throne room. During the fight, Glinda destroys the Wicked Witch’s emerald necklace that hides her true, crone-like appearance. Defeated, the banished Evanora is rescued by the two remaining Flying Baboons, swearing revenge as she is carried east.

Oscar, now ruler of Oz, uses his projector to sustain the belief he is a powerful wizard. He also presents gifts to his friends: Master Tinker, who helped build his machines, receives Oscar’s camping tool; Knuck, the grumpy Munchkin herald, receives a mask with a smiley face; the long-suffering Finley receives Oscar’s friendship along with his top hat; and China Girl accepts her friends as her new family. Finally, Oscar takes Glinda behind the curtains of his projector, thanks her for making him a better person, and they kiss.

The film, a prequel to ‘The wizard of Oz’, the tale  of the magician (played magnificently by James Franco) and his journey to Oz is well played out. It is a great tale and fun for everyone.

The first section of this mini-series is riddled with references to the original story and the musical so many of us grew up with. I was expecting that. But imagine my surprise at the presence of machine guns and chain saws in Oz.  it is now called the Outer Zone, or the O.Z. Then, of course, there are hologram projectors, machines that can project what is in a person’s mind, and cyborgs. After the first section, it grows even farther from the old story. There are still references, of course, but it’s definitely not what we knew anymore. Our heroine, DG, was born in the O.Z., but sent away as a child for her own protection. Unlike her somewhat whiny predecessor, this woman has a bit of attitude and brains. And some serious guts, as she demonstrates when she tries to help a family being attacked by Longcoats, the Sorceress Azkadelia’s henchmen.

Zooey Deschanel does a great  on her portrayal of D.C.. Azkadelia is definitely a far cry from the ugly Wicked Witch of the West. She may be beautiful, but don’t let that fool you. The old witch has nothing on this new version when it comes to evil and cruelty. In place of the Scarecrow, we have Glitch. Once a genius and Royal Adviser to the Queen, he has been reduced to a sometimes annoying, but lovable ditz. This, of course, is because he only has half a brain left. Literally. The witch had it removed so that she could use his knowledge for her own purposes. He keeps what marbles he has left sealed in his head with a zipper.

Replacing the Lion is Raw, a strange, but gentle creature with psychic abilities. Despite his timid ways, Raw is very capable of being brave, especially when it comes to his friends’ safety. The Tin Man is Caine. Or, rather, former Tin Man. “Tin Man” is the term used for police in the O.Z. He lost everything when he was discovered to be fighting for The Resistance. Worse, he was imprisoned in a sealed tin suit for years, forced to watch a holographic image of his family being tortured and taken from him over and over again. All he has left is the idea of revenge and keeping DG safe, since she is the only one who might be able to defeat Azkadelia. The Wizard is anything but wonderful. He might have been once, but has been reduced to a stoner dependent on Vapors, a magic equivalent of ecstasy. Still, in his sober moments he is a big help to the heroes. 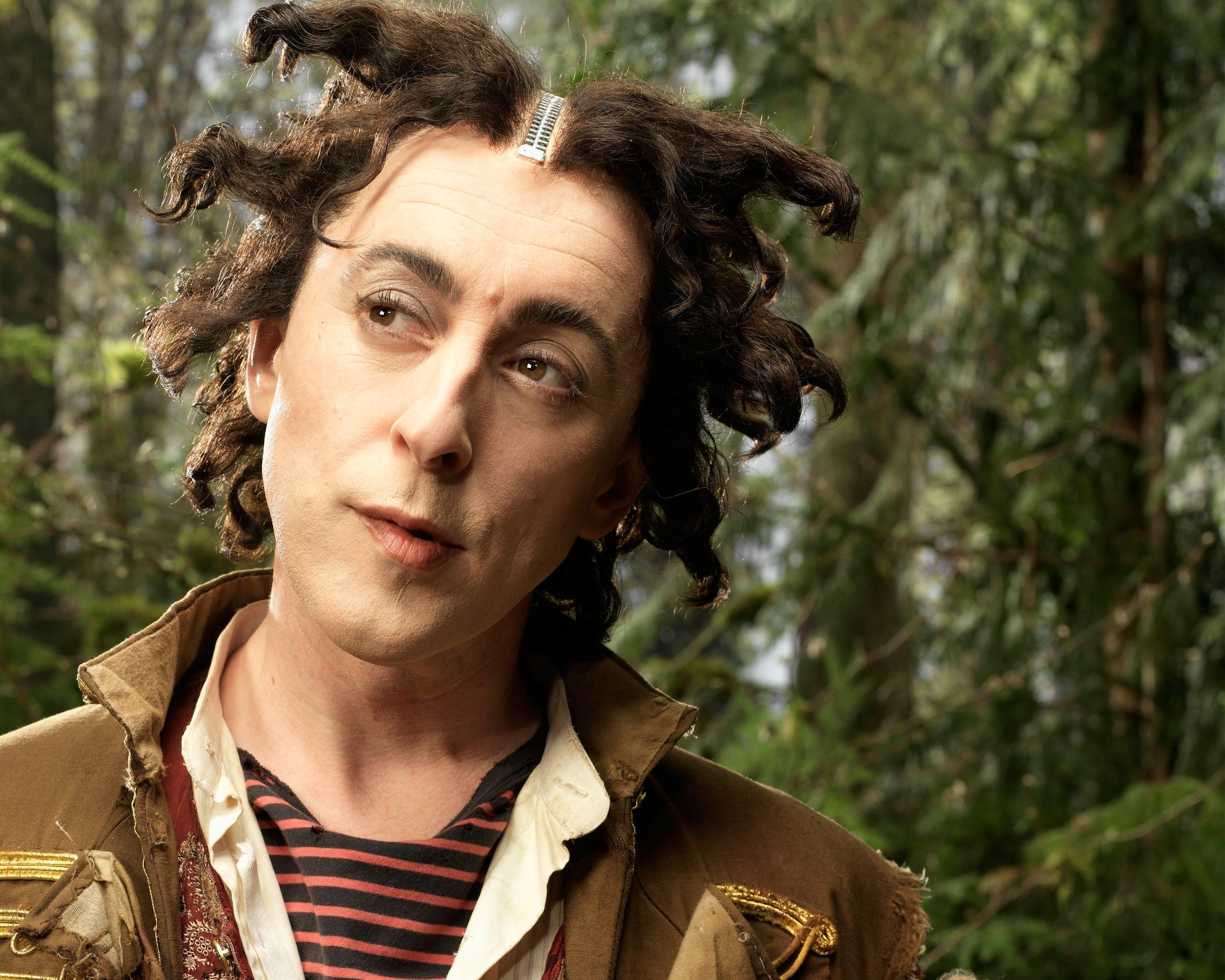 The flying monkeys are still in. The old version, ugly though they were, still managed to have a slight cuteness about them. Not these. When they’re not out doing her dirty work, they accompany Azkadelia everywhere in quite a surprising way. Toto is also still in… sort of. The little dog is actually a shape-shifter who was once a teacher to both DG and Azkadelia. After 15 years of imprisonment, he is all too willing to help his former pupil.

Overall, I was impressed. There are spots that could have been better and things that could have been more thoroughly explained, but the concepts and story are quite imaginative. It is really long, but definitely worth at least one watch.  However, I must confess, I’m a little confused as to why it is titled “Tin Man.” That implies that Caine is the main focus of the story, which he is not, although he is given a much more significant role in this version. Oh, well. It was still good, so I guess it doesn’t really matter.