Chris Sarandon (The Princess Bride)
Catherine O’ Hara (Beetlejuice)
William Hickey (Puppet Master)
Glenn Shadix (Fast Sofa)
Paul Reubens (Batman Returns)
The story starts in a forest called Holiday Woods with seven trees containing doors leading to towns representing various holidays: Valentine’s Day, St. Patrick’s Day, Easter, Thanksgiving, Christmas, Halloween and Independence Day. Halloween Town is a fantasy world filled with citizens such as deformed monsters, ghosts, ghouls, goblins, vampires, werewolves and witches. Jack Skellington, a skeleton known as The Pumpkin King, leads them in organizing the annual Halloween holiday. However, in a monologue, Jack reveals he has grown weary of the same routine year after year, and wants something more. Wandering dejectedly in the woods, he stumbles across the seven holiday doors and accidentally opens a portal to Christmas Town, whose residents are charged with organizing the annual Christmas holiday. Impressed by the bright and cheery feeling and style of Christmas, Jack presents his findings and his understanding of Christmas, to the Halloween Town residents. However, they fail to grasp his meaning and compare everything to their ideas of Halloween, although there is one Christmas character they can relate to: the fearsome lobster-like king of Christmas Town who flies at night, named “Sandy Claws”. Jack is dismayed that no one understands the feeling of Christmas, obsessively tries to study the holiday but fails to grasp any further explanation of it. He ultimately decides that it’s unfair for Christmas town alone to enjoy the feeling and there’s no reason why he shouldn’t be able to, and announces that the citizens of Halloween Town will take over Christmas this year.

Jack’s obsession with Christmas leads him to usurp the role of Santa. Every resident is assigned a task, while Sally, a beautiful rag doll woman created by the town’s mad scientist, starts falling in love with Jack. However, after a vision of a burning Christmas tree, she alone realizes that his plans to run Christmas will become disastrous, but has no luck convincing him. Jack assigns Lock, Shock and Barrel, a trio of mischievous children, to abduct Santa and bring him back to Halloween Town. Against Jack’s wishes and largely for their amusement, the trio deliver Santa to Oogie Boogie, a gambling-addict bogeyman who plots to play a game with Santa’s life at stake.
Christmas Eve arrives and Sally attempts to stop Jack with fog, but fails to do so thanks to Jack’s ghost dog Zero and his glowing nose allowing Jack to embark into the sky on a coffin-like sleigh pulled by skeletal reindeer, guided by Zero. Down on the ground, Sally prays that her premonition does not come true. Jack begins to deliver presents to children around the world, but the gifts (shrunken heads, Christmas tree-eating snakes, pumpkin jack-in-the-boxes, vampire teddy bears, toy ducks with sharp teeth, living wreaths, etc.) only terrify the recipients. The children alert their parents, who call the police, who call the military. The air raid siren is activated, and Jack is spotted with search lights, after which he is then shot at by air raid artillery cannons. Initially mistaking the firing for a celebration, he simply flies higher. However, after a reindeer is hit, and his sleigh is grazed, he realizes that he is being targeted, but the next cannon destroys the sleigh, and Jack falls from the sky to Earth, devastating Halloween Town’s citizens. Thought to have been dead by the attack, Jack crash-lands in a cemetery unharmed. Although he is depressed by the failure of his plan, he quickly regains his old spirit, having come up with new ideas for next Halloween. He then rushes back home to rescue Santa and put things right.

Meanwhile, Sally attempts to free Santa, but is captured by Oogie. Jack slips into the lair and frees them, then angrily confronts Oogie. Almost immediately, Oogie springs several traps on Jack, who manages to dodge them, and Oogie attempts to flee. However, Jack pulls one of Oogie’s loose threads, revealing him to be nothing more than a collection of snakes and insects, which are all incinerated, save for the last one, which Santa squashes with his boot. Jack apologizes to Santa for his actions, and Santa, while still annoyed with Jack, assures him that he can fix things, and leaves to deliver the right presents to the world’s children.
After Jack returns to Halloween Town, the townspeople celebrate that he’s alive, and Santa, after fixing Christmas, returns and makes snow fall over Halloween Town in reconciliation between himself and Jack. The townspeople are confused by the snow at first, but soon begin to play happily in it, finally realizing what Christmas is about. Jack spies Sally heading to the graveyard, and follows her. Atop the graveyard’s big hill, Jack admits that he reciprocates Sally’s romantic feelings for him, and they declare their new found love, and embrace on the hill.

The gothic style of this excellent film has that trademark Tim Burton feel to it, his story is brought to life by animation fan Henry Selick who directs this gloriously dark tale of the pumpkin king who becomes disillusioned by the yearly monotony of Halloween and decides to have a go at running Christmas instead. A Christmas classic. 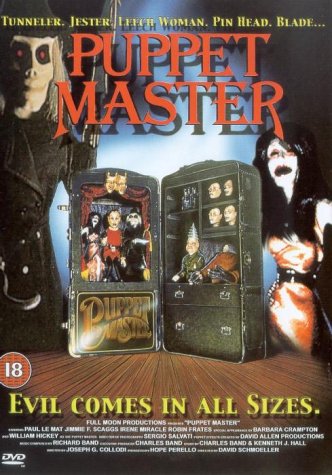 In 1939 Bodega Bay, California, an old puppeteer named André Toulon is putting the finishing touches on a living puppet named Jester. A living oriental puppet, named Shredder Khan, stares out of the window for Blade. Meanwhile, Blade scouts the grounds of the Bodega Bay Inn that André is staying. Two Nazi spies get out of a car and head for Toulon’s room but Blade beats them there and André puts Blade, Jester and Shredder Khan into a chest with an Indian puppet, named Gengie, before hiding the chest in a wall panel. As the Nazis break down the door, Toulon shoots himself in the mouth with a pistol.

50 years later, in 1989, psychics Alex Whitaker, Dana Hadley, Frank Forrester and Carissa Stamford make contact with an old colleague of theirs, Neil Gallagher, and conclude he found Andre Toulon’s hiding place. Each one of them experiences a different vision; Alex sees Neil pointing a gun at a young woman’s head, and dreams of leeches sucking blood out of his stomach, while Dana foresees her possible death. The psychics meet at the Bodega Bay Inn that Neil resides at and meet Neil’s wife, Megan, the woman from Alex’s vision. They also meet the housekeeper, Theresa. The psychics are skeptical that Neil took a wife but it is forgotten when Megan tells them that Neil shot himself. Theresa, Megan, and Alex leave the body, leaving Frank, Carissa and Dana. Dana stabs a long pin into Neil’s corpse to verify that he is in fact dead.

Each psychic experiences a vision; Dana tells Theresa not to go near the fireplace, Alex sees Neil wearing a mask while dancing with Megan in the dining room, and Carissa sees Neil assaulting a woman in the elevator. As the sun sets, Pinhead, who is another living puppet, climbs out of Neil’s casket. That night at dinner, Dana makes several remarks about Neil that causes Megan to leave the table. Alex goes after her and explains about the powers of the people in the group. Carissa is a psychometrist, and she can touch an object and give the object’s history, Dana can tell fortunes and locate things and people, and Alex himself has premonitions in his dreams and when he’s awake. All four of them were helping Neil in his research of alchemy, and during that time, Frank and Neil discovered that the Egyptians created a method of giving life to inanimate figurines, a power passed down to practitioners of magic, and Dana tracked down the location of Andre Toulon, the last true alchemist, to the hotel. But because he had not made contact with them in a while, Dana and the rest think he abandoned them and took whatever he was looking for himself, and they are there to take it and settle the score.

When night falls, Theresa goes near the fireplace and is knocked out when Pinhead hits her with a poker. Someone moves Gallagher’s body to a chair, and causes Megan to become ill. Before going to bed, Dana puts protection spells around Alex and his room, forcing Blade to leave Alex alive for now. Carissa and Frank spend some intimate time together to open up a channel and make contact with Neil in their hotel room but two more living puppets, Tunneler and Leech Woman, enter. Tunneler kills Carissa by drilling into her face and Leech Woman vomits leeches onto Frank’s body, which drain his blood, which disrupts Alex in his sleep. Meanwhile, Gallagher’s body reappears in Dana’s room, and she puts a spell on him to put him at rest until she is attacked by Pinhead, who breaks her leg. Pinhead chases her and repeatedly strangles and punches her until she manages to knock him away, only to have her throat cut by Blade, using his knife-hand, fulfilling her fortune.

Alex has a premonition of Megan taking him to Toulon’s room when nightmares of Megan having a gun put to her head by Neil and the other psychics being found dead block him from seeing the room, but is eventually awoken by Megan, who takes him into the room that Andre Toulon was in, and tells him that Neil found Andre’s secret to bringing inanimate objects to life. Alex has a vision of Neil shooting him and they go downstairs to escape when Alex senses the others in the dining room, and finds their dead bodies sitting around a table. They are stopped by the newly resurrected Neil. He explains that “metaphysically speaking”, he did commit suicide, but he used Toulon’s secrets to become immortal. He contacted them all so they wouldn’t take the secret from him, and he hopes to use their bodies for future human experiments, expressing disgust of working with the puppets and violently throws Jester at a chair. Seeing this attack on one of their own, the puppets revolt against Neil, brutally killing him in front of Alex and Megan. The film cuts to Alex saying goodbye to Megan and leaving the hotel. Now alone, Megan picks up Dana’s taxidermied dog, and in the following scene, the dog becomes completely animate, walking up the stairs with Megan, suggesting that she, too, has learned Toulon’s method. Perhaps, even that Dana’s spirit has taken over Megan’s body!

I was surprised: it was good very entertaining. It inspired me to see the sequels, too, and they – most notably the third one – were good, too. It’s a little slow to start with, but once the puppets begin their attack story gets interesting, concluding with a gruesome ending.