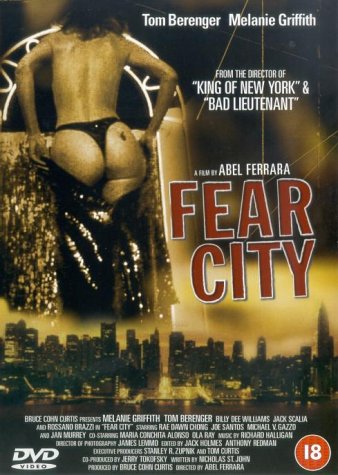 Disappointing follow up for Abel Ferrara to the excellent Ms. 45(1981) for a few reasons. One, there is not the same emotional or intensity level of the previous film. Two, the main character compared to Thana is almost not likable. Three, at times the film is fascinating to watch while other times the film bogs down to boring. It also doesn’t know whether it wants to be a slasher pic, a mafia epic or both. The inclusion of the mafia in Fear City(1984) sort of reminds me of Fritz Lang’s M(1931). Like in M(1931), the mafia is interested in finding the stalker/murderer because he’s hurting their business. Part of Fear City(1984) is a warmup for King of New York(1990) and The Funeral(1996).

A ridiculous aspect of the movie is the idea of the karate killer. I wondered why this film was not named The Karate Killer which is a better title than Fear City(1984). The karate stalker/murderer seems out of place in Fear City(1984) for he is someone who belongs more in a Steven Seagal film and less in an Abel Ferrara feature. Major putdown that hurts the film a lot.  Matt Rossi is a character that’s hard to pin down. In some scenes he is arrogant and unlikable. In other scenes Matt Rossi is guilt ridden and vulnerable. Its this guilt ridden quality of Matt Rossi that puts him in the line of Ferrara characters such as Thana(Ms. 45), Frank(King of New York), and the Lt(Bad Lieutenant).

The filming of the sleezy locale of Fear City is one of the film’s saving graces. Abel Ferrara is terrific at showing a part of New York where sleeze, sex , and death are common and life or human flesh is cheap. Done before the current Mayor of New York City cleaned that part of the city up. In the style of many similar Italian erotic thrillers. Fear City and Lucio Fulci’s The New York Ripper(1982) have a lot in common with each other. One, both films take place in the sleezy parts of Times Square during the 1980s. Two, the two films have a killer whose on an insane mission for human purity. Three, the violence and the sex in Fear City(1984) and New York Ripper(1982) are depicted in an ugly and unpleasent fashion.

Like other Ferrara features except for Bad Lieutenant(1992), Fear City was badly cut for its theatrical release in the United States. It seems that the director’s films are not well liked by the MPPA. I might see the movie in a different light if I ever saw the complete uncut version of Fear City. Scenes that were cut or trimmed involved heavy graphic violence. The first flashback sequence is a fantasic blend of realism and surreal. Done with the same horror quality as the dream of Thana from Ms. 45(1981). The second flashback sequence is even better. Shows how Matt Rossi got involved with Mafia Boss, Carmine. The fight between boxer Matt Rossi and the Karate Killer is both entertaining and silly. A strange way for Matt Rossi and the Karate Killer to confront each other. This sequence loses some steam after a few minutes bcause of the one sided match. Pales in comparison to the Halloween party massacre sequence in Ms. 45(1981).

What appears to be a random kidnapping becomes something more sinister when Secret Service Agent Jeremy Reins discovers he’s being used as a pawn in a terrorist plot. Watching the clock tick down to an unknown catastrophe, Jeremy is forced by his captors to listen to the outside world on the brink of collapse, knowing that the only way to save the people he loves is to divulge a secret that he has sworn to protect.

The film spends much of its time establishing a great deal of tension. They explain the plot well and you understand everything. The ending however turns into almost pure cheese. As if the initial ending didn’t require you to ignore a host of outrageous questions, but then they throw another spin at you that is almost if not even more so ludicrous. Its unfortunate because compared to Reynolds’ “Buried” which everyone is so eager to compare this to, this one wraps everything up and ties it off far more neatly than that one did. I felt more satisfied with the ending they provided even if it did require a huge suspension of belief and ignoring a lot of “wait a minutes.” Regardless, I encourage anyone looking for a good solid unique thrill ride then ignore the awful reviews and rantings and give this a try yourself. Enjoy it!! Be entertained by it and you won’t be disappointed!