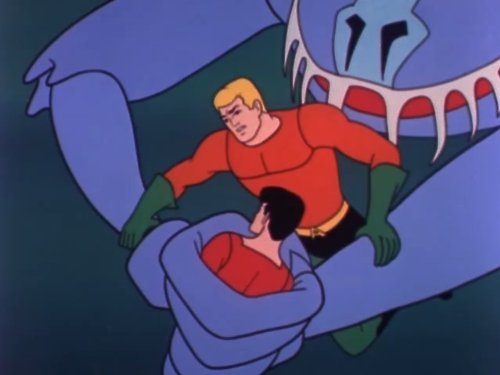 Arthur Curry (aka Aquaman) has been around a long time, having debuted in More Fun Comics in 1941 and off-and-on starring in his own comic book. And, despite the longevity and near-but-not-quite iconic stature, there are busloads of people who just aren’t feeling Aquaman. And I guess I can see where they’re coming from. He’s a bit hard to pigeonhole, this outsider, as he’s forever tiptoeing the line of superhero and undersea sovereign. Priorities are a definite issue. With much cooler capes like Batman, Superman, the Flash, and Green Lantern doing their thing, Aquaman as a superhero pales in comparison, right? I mean, he’s a guy whose super powers are chit-chatting with fish, breathing underwater, and swimming really fast. And these talents don’t really translate well when he ventures to shore. Not to mention, remove him from his watery environs for longer than an hour, and he croaks.

This Series Returns us to a time when Aquaman was perceived as clean-cut, straight-laced, and non-controversial.  The Aquaman cartoons shy from typical superhero fare, certain limitations coming with having the ocean as your workplace. No cops and robbers as we know it. No familiar cityscapes. The rules are different. And, yet, there’s evidently more villainy in the waters than one would assume. Assisting Aquaman (and sometimes hindering him) in his policing of the Seven Seas and safeguarding the domed city of Atlantis are Aqualad (a clear sidekick ripoff of Robin) and the lovely Mera, whom I don’t think is Aquaman’s wife here. Aquaman doesn’t really have a standout cast of supervillains on his rolodex, perhaps another reason why he’s not more popular. Black Manta, his most vaunted superfoe, makes two appearances (“Menace of the Black Manta” and “The Silver Sphere”).

The Sea King is equally busy with other recurring nasties the Mer-Queen Vassa, the Fisherman, and the Brain. Aquaman also tackles a bevy of vile deep sea monsters or creatures and dastardly space aliens, one race of whom merely wanted to shrink and collect ocean life samples, but they should never have taken Tusky. And, sometimes, Aquaman’s adventures enter into the realm of the just plain weird. “War of the Water Worlds,” for one – in which Aquaman stumbles onto another water world lying beneath the ocean – is memorable for the grotesque fishes and monsters.

All 36 shorts are here in all their 7 minute glory, and they look fabulous on my screen. These Aquaman cartoons didn’t try to change the world or champion a cause or go overboard with plot or character development. At seven minutes long, is you crazy? Not much chance here for intricate world shaking stuff. Instead, these episodes are ideal for the kiddies and their minuscule attention span.

The undersea world is conveyed in a wash of brilliant colors, lending it a truly mysterious and otherworldly feel. And I remember how I keenly marveled at the grace with which Aquaman and company navigated thru the deeps. For late ’60s animation, Filmation did excellent work, with special note to the characters’ smooth movements.