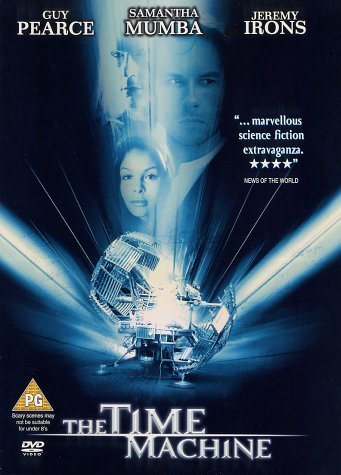 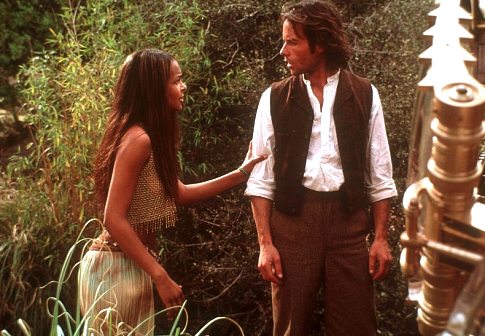 In the year 1899, Dr. Alexander Hartdegen (Guy Pearce) is a moderately young inventor teaching at Columbia University in New York City. Unlike his conservative friend David Philby (Mark Addy), Alexander would rather do pure research than work in the world of business. After a mugger kills his fiancée, Emma, he devotes himself to building a time machine that will allow him to travel back in time and save her. When he completes the machine four years later, he travels back to 1899 and prevents her murder, only to see her killed by a horse and buggy.

Alexander goes to 2030 to find out whether Emma’s life can be saved. At the New York Public Library, a holographic librarian called Vox 114 insists that time travel is impossible, so Alexander continues into the future until 2037, when the accidental destruction of the moon by space colonists renders the Earth virtually uninhabitable. When he restarts the time machine to avoid falling debris, he is knocked unconscious and travels to the year 802,701, at which point he regains consciousness and stops the machine.

By now, the human race has reverted to a primitive lifestyle. Some survivors, called “Eloi”, live on the sides of cliffs of what was once Manhattan. Alexander is nursed back to health by a woman named Mara, one of the few Eloi who speak English. One night, Alexander and Mara’s young brother, Kalen, dream of a frightening, jagged-toothed face. The next day, the Eloi are attacked and Mara is dragged underground by ape-like monsters. The creatures are called “Morlocks” and they hunt the Eloi for food. In order to rescue her, Kalen leads Alexander to Vox 114, which is still functioning after 800,000 years. After learning from Vox how to find the Morlocks, Alexander enters their underground lair through an opening that resembles the face in his nightmare. He is almost immediately captured and thrown into an area where Mara sits in a cage. There he meets an intelligent, humanoid Morlock, who explains that Morlocks are the evolutionary descendants of the humans who went underground after the Moon broke apart, while the Eloi are evolved from those who remained on the surface. The humanoid Morlocks are a caste of telepaths who rule the other Morlocks.

The Morlock explains that Alexander cannot alter Emma’s fate because her death is what drove him to build the time machine in the first place: saving her would create a temporal paradox. He then reveals that the Morlocks have brought the time machine underground, and tells Alexander to get into it and return home. Alexander gets into the machine but also pulls the Morlock in with him, carrying them into the future as they fight. The Morlock dies by rapidly aging when Alexander pushes him outside of the machine’s temporal bubble. Alexander then stops millions of years in the future in the year 635,427,810, revealing a harsh, rust-colored sky over a wasteland of Morlock caves. Finally accepting that he cannot save Emma, Alexander travels back to rescue Mara. After freeing her, he starts the time machine and jams its gears, creating a violent distortion in time. Though pursued by the Morlocks, Alexander and Mara escape to the surface as the time distortion explodes, killing the Morlocks and destroying their caves along with the time machine. Alexander begins a new life with Mara and the Eloi in 802,701.

While Alexander shows Mara and Kalen a clearing that was once the location of his laboratory, back in 1899, in the same spot, Philby and Alexander’s housekeeper, Mrs. Watchit, are in the laboratory and sadly discuss his absence. Philby tells Mrs. Watchit he is glad that Alexander has gone to a place where he can find peace, then tells her that he would like to hire her as a housekeeper, which she accepts until Alexander returns. Mrs. Watchit bids Alexander farewell and Philby leaves, looking toward the laboratory affectionately, then throws his bowler hat away in tribute to Alexander’s distaste for conformity.

this is a good film in it’s own right. It goes at a fair pace, has its tensions and added violence that all films must have now. But so much of this film is not part of the original story that it should have had the last vestiges of the H.G. Wells story removed and been made as an original film. 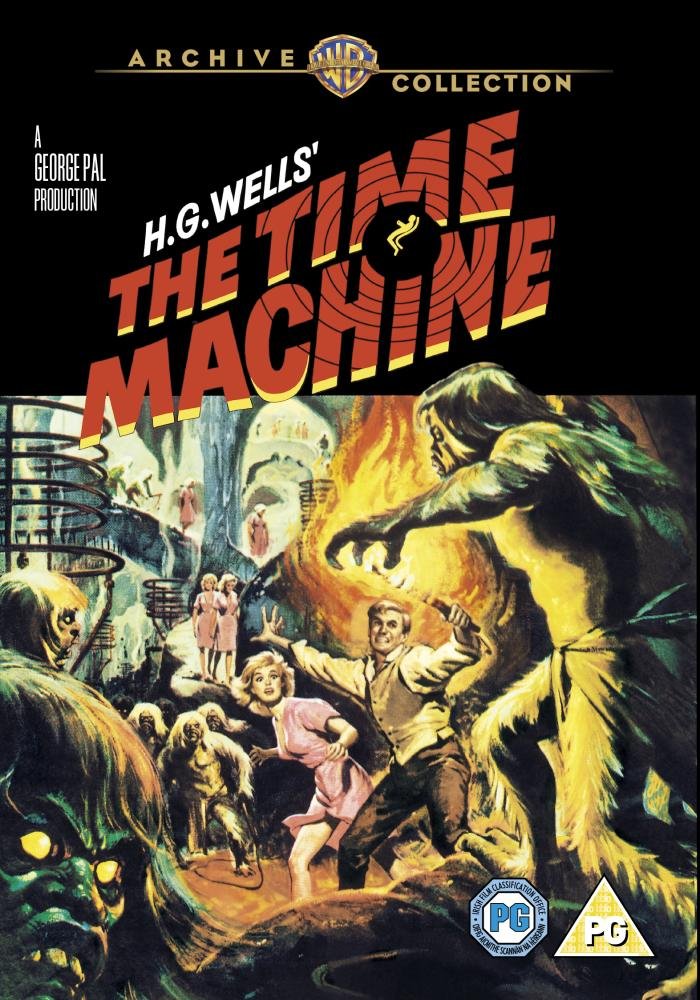 On January 5, 1900 in London, four friends arrive for a dinner at the house of their friend H. George Wells (Rod Taylor), an inventor. Bedraggled and exhausted, George arrives and begins to describe the strange experiences he has had since the group last met. At their earlier dinner, on December 31, 1899, George describes time as “the fourth dimension” to David Filby (Alan Young), Dr. Philip Hillyer (Sebastian Cabot), Anthony Bridewell (Tom Helmore), and Walter Kemp (Whit Bissell). He shows them a small model of his time machine and asks a guest to press a tiny lever. The device disappears, validating his claim, but his friends remain unconvinced; their reactions vary from curiosity to frank dismissal.

George bids his guests a good evening, then heads downstairs where his full-size time machine awaits. He presses a lever and moves forward through time 17 years into the future. He meets Filby’s son, James, who tells him of Filby’s death in the Great War. Saddened, he resumes his journey, stopping in 1940 during The Blitz, finding himself in the midst of “a new war”; George resumes his journey and stops in 1966, finding his neighbourhood now part of a futuristic metropolis. People are hurrying into a nearby fallout shelter amid the blare of air raid sirens. An elderly James Filby urges George to immediately take cover, but he does not understand the danger. A nuclear explosion causes a sudden volcanic eruption around him. George continues his journey forward as the lava rapidly cools and hardens, trapping him inside. He travels far into the future until the topography changes. Hundreds of thousands of years later, the rock erodes away to reveal that London is now gone, and has been replaced by a lush, green and unspoilt landscape.

George stops in AD 802,701 near the base of a towering sphinx. He goes exploring and finds a group of delicate young men and women wearing simple clothing gathered at a stream. One woman, carried off by the current, screams for help but none of her companions show any concern. George rescues her and is surprised when, revived, she walks away without a word; later, she seeks him out, giving him a flower. She says her name is Weena (Yvette Mimieux) and tells George her people are called the Eloi. He soon learns the Eloi do not operate machines, work, read, and know virtually nothing of history; they do not even understand fire. George decides to leave but discovers his machine has been dragged into the sphinx. Weena tells him “Morlocks”, who only come out at night, have moved it. A Morlock jumps out from behind bushes and tries to drag her away, but the creature’s light-sensitive eyes are blinded by George’s fire torch; he easily rescues her.

The next day, Weena shows George domed, well-like structures that dot the landscape; they are air shafts that double as access to the Morlock underworld. She takes him to an ancient museum where “talking rings” tell of a centuries-long nuclear war in the distant past. A reduced population fought for survival in the poisoned landscape; many decided to live underground in permanent settlements, while some decided to return to the surface. George realises this marked the beginning of speciation for the Morlocks and the Eloi. He starts to climb down a shaft but turns back when sirens blare from atop the sphinx. He emerges to find Weena gone and crowds of Eloi in a trance-like state, entering open doors at its base. The sirens stop and the doors close, trapping Weena inside. George enters the Morlocks’ subterranean caverns and is horrified to discover that the Eloi are the free range livestock for the cannibalistic Morlocks. After finding Weena, he begins fighting the creatures. His efforts inspire other Eloi, who begin to defend themselves. George sets a fire and urges the Eloi to clamber out of the caverns to the surface, where he directs them to gather dry tree branches and drop them down the shafts. Smoke billows out of the shafts, and the subterranean cavern later collapses.

The next morning, George finds the sphinx in charred ruins and its doors open. His time machine sits just inside, a trap set by the Morlocks. He enters, the doors close, and he is attacked in the dark. George sends his time machine hurtling into the past, returning to 1900. It comes to rest on the lawn outside his house, where his story ends. George’s friends are again skeptical. He produces Weena’s flower and Filby, an amateur botanist, says the species is completely unknown in the 19th century. George bids his guests a good evening. Filby steps out but returns to find George and his machine gone. He notices drag marks where it would be positioned outside the sphinx after returning to the Eloi. Filby and Wells’ housekeeper notice three books are missing. Filby asks her, “Which three would you have taken”? She wonders if George will ever return. He observes that George has “all the time in the world”.

The Time Machine may have been updated with a new and flashy remake, but it will never be able to capture the charm and quality of the original.