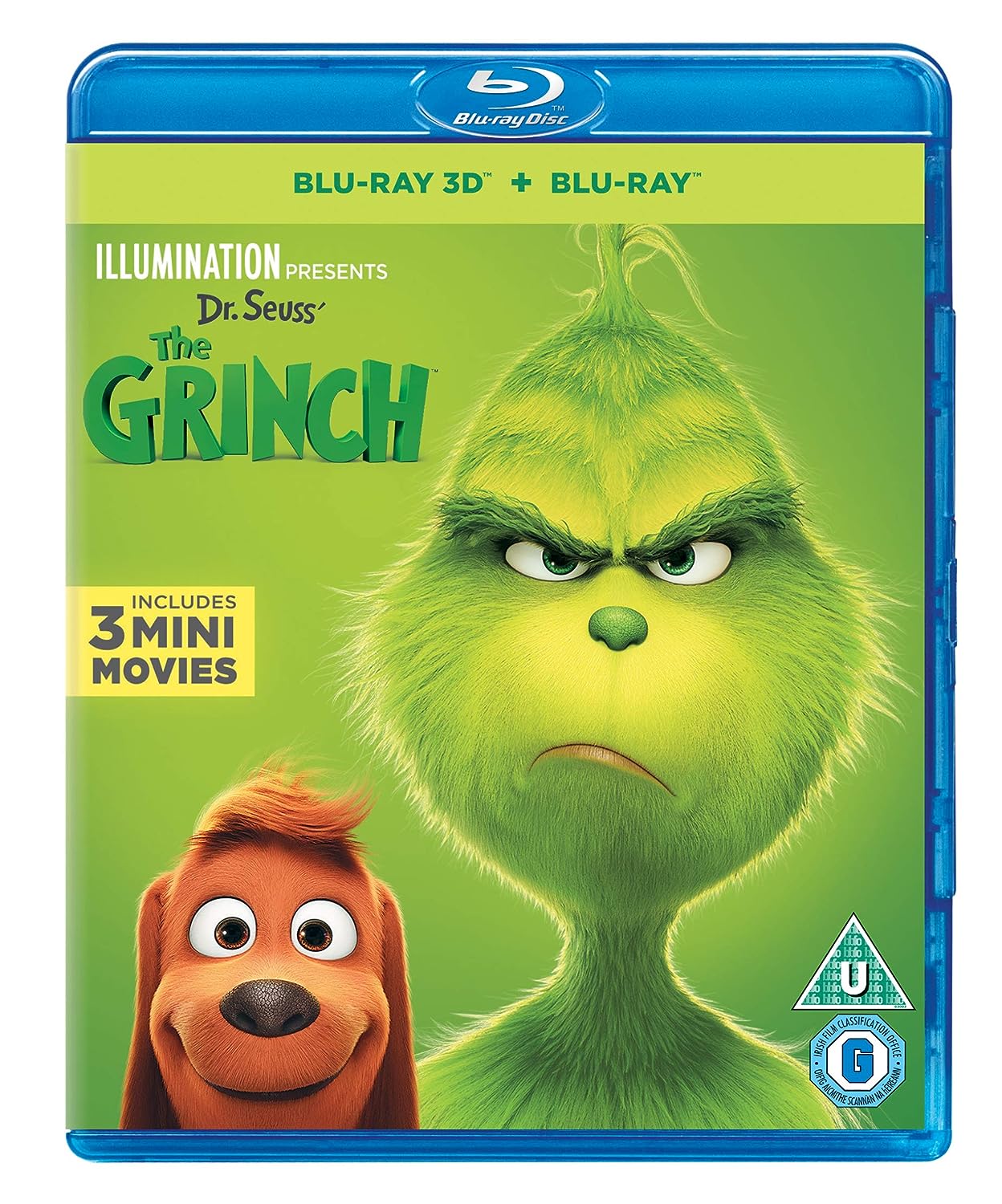 In the town of Whoville, the humanoids called Whos are filled with excitement about celebrating Christmas. The only one who isn’t amused is a cantankerous, green furred creature called The Grinch, who has a heart “two sizes too small” and lives in a cave on the top of Mount Crumpit just north of Whoville. The Grinch has a pet dog named Max and they both only visit Whoville when the Grinch needs to buy food and do bad things.Meanwhile, 6-year-old Cindy Lou Who notices that her mother Donna is overworked trying to take care of herself and her baby twin brothers, Buster and Bean. At first, she decides to send a letter to Santa Claus to help her mother, but after encountering the Grinch, who sarcastically says that she’ll have to talk to Santa face-to-face about it, she then decides to go to the North Pole to talk to Santa, but when Donna tells her that it would take a month to get there and back home, her final decision is to try and trap Santa with the help of her friends.With Christmas approaching, all the Whoville festivities give the Grinch a flashback, recalling his disjointing childhood spent mostly alone and unwanted in an orphanage. The Grinch soon decides that he will steal Christmas from Whoville to assuage his distress. He acquires a fat reindeer whom he calls Fred to help him pull a sleigh that he stole from his neighbor, Mr. Bricklebaum. After a test run, the Grinch discovers that Fred has a family. With a heavy heart, he lets Fred go home with them.On Christmas Eve, after making a Santa Claus disguise and dozens of gadgets to help him with his plan, the Grinch and Max, who pulls the sleigh in Fred’s place, go down to Whoville to steal the decorations and presents. He soon encounters Cindy after falling into her trap. Her request to help lighten her mother’s workload, and her kind advice about listening to the Whos’ singing to alleviate his sadness, touches the Grinch’s bitter heart. Nevertheless, the Grinch carries on with his mission.

After stealing every Christmas present and decoration, the Grinch and Max head back to Mount Crumpit to dispose of them. The Whos wake up and are shocked to see that the presents and decorations are gone. At first, Cindy believes that she’s to blame because she ‘trapped’ Santa, but Donna tells her that Christmas is more than just about presents, and that Cindy’s the best thing that ever happened to her. The Whos join together to sing.

The Grinch and Max hear the singing, rendering the Grinch puzzled to see that they are celebrating Christmas despite his theft. After heeding Cindy’s advice and immersing himself to their singing, His heart grows three sizes larger. The sleigh falls off Mount Crumpit, and the Grinch tries to save it. In the nick of time, Fred and his family come to his aid. After securing the sleigh, the Grinch and Max go to Whoville to return the stolen items. A guilt-ridden and remorseful Grinch admits his crimes to the Whos, and apologizes before returning to his cave, Ashamed.

Feeling sorry for the Grinch, Cindy Lou comes to invite him to celebrate Christmas at her house, and he awkwardly attends. When seated down for dinner, he realizes and confesses that it wasn’t really Christmas he despised, but being alone and his bitterness over being neglected. Before carving the roast beast, the Grinch offers a toast “To kindness and love, the things we need most.” 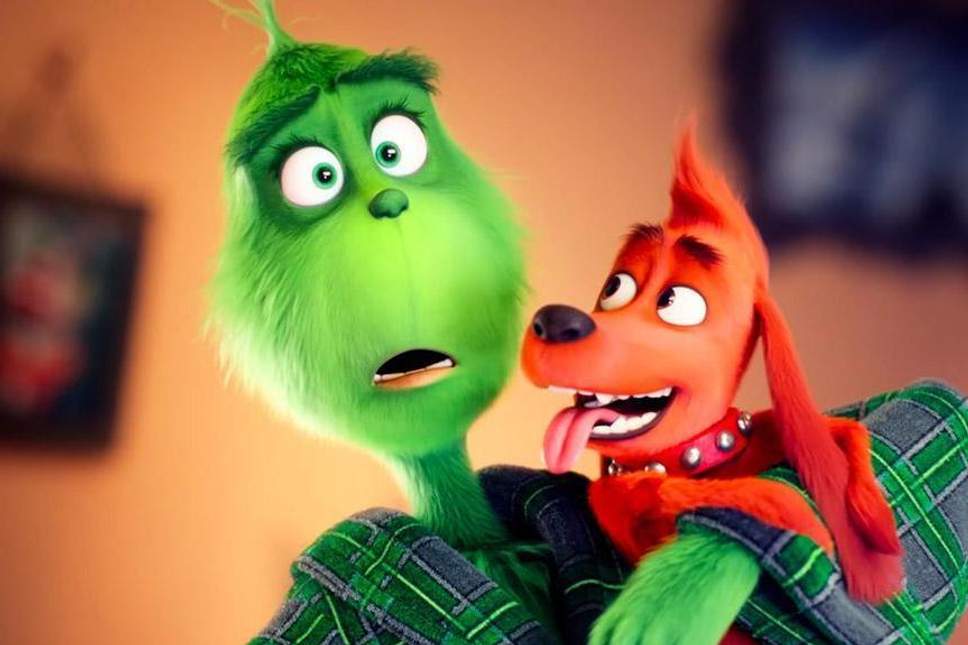 It is the classic story of The Grinch we all know so well. So yes its predictable, yes we know what’s going to happen and how it ends, but even so it was a joy to watch. It had quite a few laughs and some very sweet moments. I personally liked it.

All the Whos down in Whoville enjoy celebrating Christmas with much happiness and joy, with the exception of the Grinch (Jim Carrey), who resents Christmas and the Whos with great wrath and occasionally pulls dangerous and harmful practical jokes on them. As a result, no one likes or cares for him. Meanwhile, six-year-old Cindy Lou (Taylor Momsen) believes everyone is missing the point about Christmas by being more concerned about the gifts and festivities. After having a face-to-face encounter with the Grinch at the Post office in which he saves her life, Cindy Lou becomes interested in his history; she asks everyone what they know about him, and soon discovers that he has a tragic past.

The Grinch actually arrived in Whoville by mistake when he was a baby, and was adopted by two elderly sisters. Although he showed some sadistic tendencies as a child, he was rather timid and not the cruel, selfish person he would become; he was ridiculed by his classmates (particularly by Augustus May Who, the current Mayor of Whoville) because of his appearance, with the exception of Martha May Whovier, who was courted by both the Grinch and May Who. One Christmas season, he made a gift for Martha, but attempted to shave his face after being made fun of for having a “beard”, cutting himself and when the school saw his face covered with shaving tape the next morning, they laughed at him. He lost his temper, went on a rampage and ran away to live on Mt. Crumpit.

Cindy Lou, touched by this story, decides to make the Grinch the main participant of the Whobilation, to the great displeasure of Mayor May Who, who reluctantly agrees after pressure from the townspeople, who have been warmed by Cindy Lou’s generous spirit. When Cindy Lou goes to Mt. Crumpit and offers an invitation to the Grinch, he turns her down. He gradually changes his mind, however, due to the promise of an award, the presence of Martha at the celebration and the chance to upset the Mayor. Just as the Grinch is enjoying himself and is almost won over, May Who gives him an electric shaver as a present, reminding him of his awful humiliation at school. May Who then asks Martha to marry him, promising her a new car in return. This causes the Grinch to openly berate the Whos for thinking that Christmas is about gifts that they will just dispose of later, in the hopes of making them too ashamed to celebrate the holiday. He then goes on to ruin the party by burning the Christmas tree with a flamethrower. When he discovers that his attack has not removed the spirit of Christmas from the Whos, the Grinch instead concocts a plan to steal all of their presents while they are sleeping. Creating a Santa suit and sleigh with his own dog, Max, as a “deer”, the Grinch flies around Whoville, stealing all of the Whos’ Christmas gifts. He is almost discovered by Cindy Lou, but concocts a lie that allows him to get away. The next day, the Whos discover the Grinch’s scheme, and May Who denounces Cindy Lou as the root of this catastrophic disaster. However, her father, Lou Lou Who, finally stands up to him and reminds everyone that they still have the Christmas Spirit and that the principal meaning of Christmas is to spend it with family and friends. The people accept his speech and begin to sing. Hoping that the change of mood would inspire the Grinch, Cindy Lou goes to Mt. Crumpit to find him.

The Grinch reveals that he intends to push the stolen gifts off the top of the mountain after he hears the Whos crying. However, instead of crying, he hears the joyful singing of the Whos. Infuriated about the failure of his plan, the Grinch has an epiphany about what Christmas is really about: not material gifts, but spending time with loved ones, an insight that profoundly touches him and causes his heart to grow to three times its original size. When the sleigh full of stolen gifts begins to go over the edge of the cliff, the Grinch desperately tries to save them to no avail. However, when he realizes Cindy Lou has come to wish him a merry Christmas and is in danger of falling off the cliff with the sleigh, the Grinch finds enough strength to lift the sleigh, the gifts and Cindy Lou to safety. After a long descent down Mt. Crumpit, the Grinch returns to Whoville with Cindy and the gifts. He confesses to the burglary and apologizes for his actions towards the Whos and gives himself up to the arriving police, but the Whos reconcile with the Grinch. Martha turns down May Who’s proposal and decides that she would rather stay with the Grinch instead. The redeemed Grinch starts a new life with the Whos, commemorating the Christmas feast with them in his cave.

What can be said for The Grinch, if you have not seen it then I wholeheartedly recommend it. It is a fantastically funny film that I always go back to every Christmas

John Kassir (Tales From The Crypt)

The Dog Days of Winter is the 2018 animated short, inspired by and starring the characters from the 2018 movie adaptation of The Grinch, which was produced by Illumination with its animation service in France. It premiered in prime-time on NBC on November 23, 2018 as filler between the uncut airing of the 1966 animated special and Trolls Holiday, while the movie itself was still in the extended theatrical holiday run, and later included as one of the three mini-movies on the movie’s home video releases (along with Santa’s Little Helpers and Yellow is the New Black).

The Grinch is sick and he’s out of tea. Max decides to brave the snow to go into Whoville to buy more tea. I actually missed the empty tin of tea the first time around. Quite frankly, I think the short would work better without the coin. Max stealing the tea would be inherently more dangerous and more thrilling. While it makes Max a very good boy, it also makes him a little too smart. It’s fine.