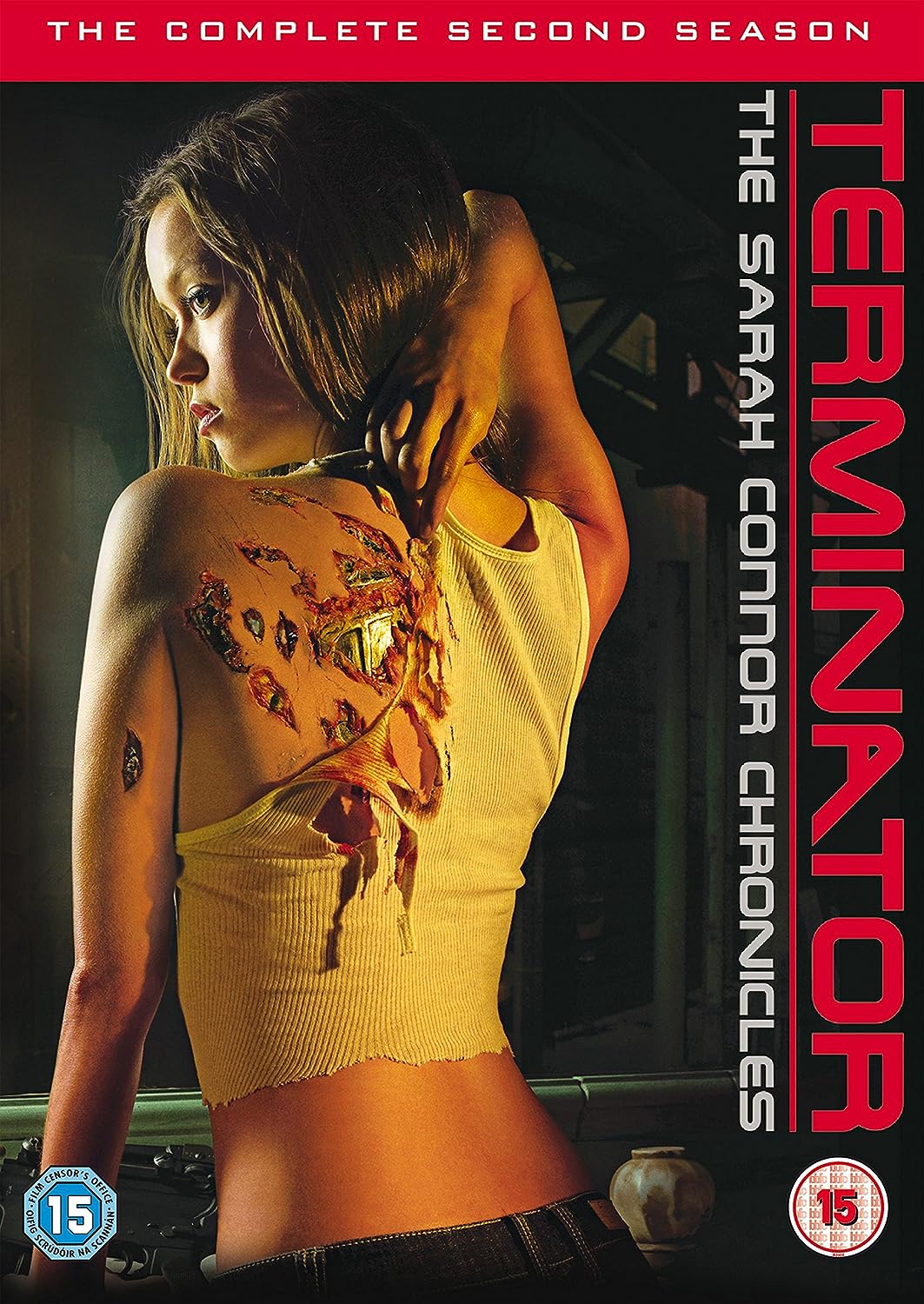 I enjoyed the first season of Terminator: The Sarah Connor Chronicles, despite its shortened season which fell victim to the writer’s strike, I was looking forward to what they had in store for Season Two. The first season had excellent performances and action sequences, appealing storylines, and show runner Josh Friedman was performing his job well. I expected things to fall in line for Season Two, however I had a small bit of apprehension: the addition of Shirley Manson, normally the lead singer of the band Garbage, to the cast.I thought this was a dicey proposition. Manson had not done any real acting work before, and Friedman might have been overreaching. Granted, his casting masterstroke in Season One was Brian Austin Green, formerly of Beverly Hills 90210, now appearing as Derek Reese, brother of Kyle. As a brief overview for those unfamiliar with the mythology, Kyle is father to John Connor (Thomas Dekker, A Nightmare on Elm Street), leader of the resistance against Skynet and the cyborg army of terminators. John’s mother Sarah is played by Lena Headley (300). And of course, it wouldn’t be a show about terminators without one as a cast regular; enter Summer Glau (Firefly) as Cameron. More on all of them in a minute.Back to the risky decision. Manson plays Catherine Weaver, CEO of a high-powered technology corporation called ZeiraCorp. Manson is a T-1000, similar to Robert Patrick in T2, and she assumes the life of the real Weaver, who died in a helicopter crash with her husband. Their daughter is still alive, which presents a unique challenge, as a terminator hasn’t been placed in a truly maternal role before. Oddly enough, Manson’s role as an emotionless being trying to figure out how to be a mother is one of the season’s better performances (in “The Tower Is Tall But The Fall Is Short”), and she proves to be a capable actress. This introspection from non-feeling machine against a motherly disposition is fascinating in how Manson can show her emotions and yet not reveal her hand, as it were.Fortunately, we see similar stories behind other characters. In the episode “Allison From Palmdale,” not only do we discover Cameron’s origins but also why her physical traits were used as a model for a terminator. The performance is not as deep as Manson’s, but Glau does admirably. The self-evaluation continues with John as he gets involved in a relationship with Riley (Leven Rambin), which is almost like the last part of teenaged life he’ll enjoy before his imminent future with the resistance, of which Sarah dutifully reminds him. Sarah continues to struggle with her mortality because of a possible illness, and Derek has a particular conflict with Jesse (Stephanie Jacobsen, Life on Mars), who also came back from the future with motives that appear to differ from Derek’s. The quality of guest stars improved as well: Dean Winters (Oz) and Garret Delahunt (No Country For Old Men) reprise their roles as Charley and Cromartie, respectively. As Agent Ellison, Richard T. Jones is a guy who questions his spirituality and later rationalizes it to believe that what he does is right, though we know otherwise. Some of the other faces in Season Two include former West Wing regulars Richard Schiff and Joshua Malina, and Dorian Harewood (Full Metal Jacket) plays a psychiatrist whose work affects several cast regulars, and has long-lasting impacts for future episodes. 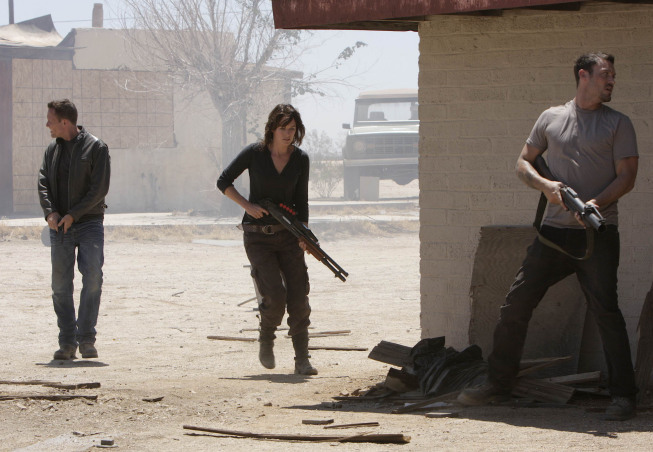 But it’s not like any Terminator project is known for its ensemble work. This has the requisite amount of action sequences and visual effects, and that action helps emphasize the points the story is trying to tell. For a good CG illustration, Manson kills the staff of a warehouse before blowing it up, but normally most of the stunts are done practically and look convincing as a result. 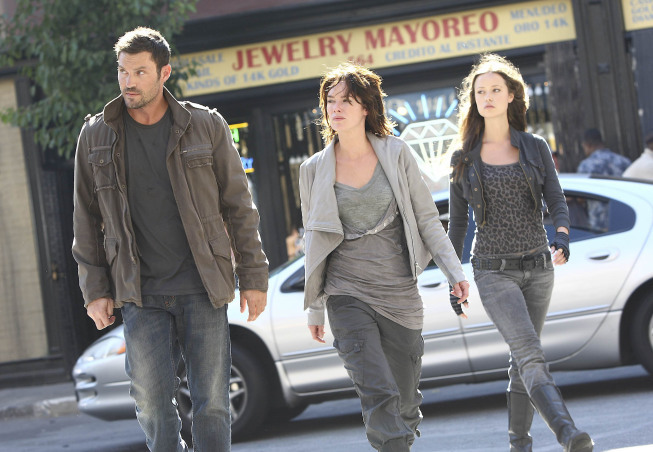 Sadly though, I have to think that there weren’t enough people willing to take a leap of faith and give the show a chance because it wasn’t a big-budget action film. It told stories with each of its characters and did so well. I’m guessing that wasn’t appreciated. Additionally, the release of the fourth Terminator film in the summer of 2009 probably gave the show an over saturation point with the public which hampered any acceptance of it. So now the show’s gone from our televisions, and while we have a new crop of reality shows and sitcoms with retread stars to pore over, I’d encourage people to give The Sarah Connor Chronicles a second view. It’s funny, smart, suspenseful, intriguing and artistic. And yes, it’s a science fiction show. Further proof that the genre has some quality creative minds contributing to it. 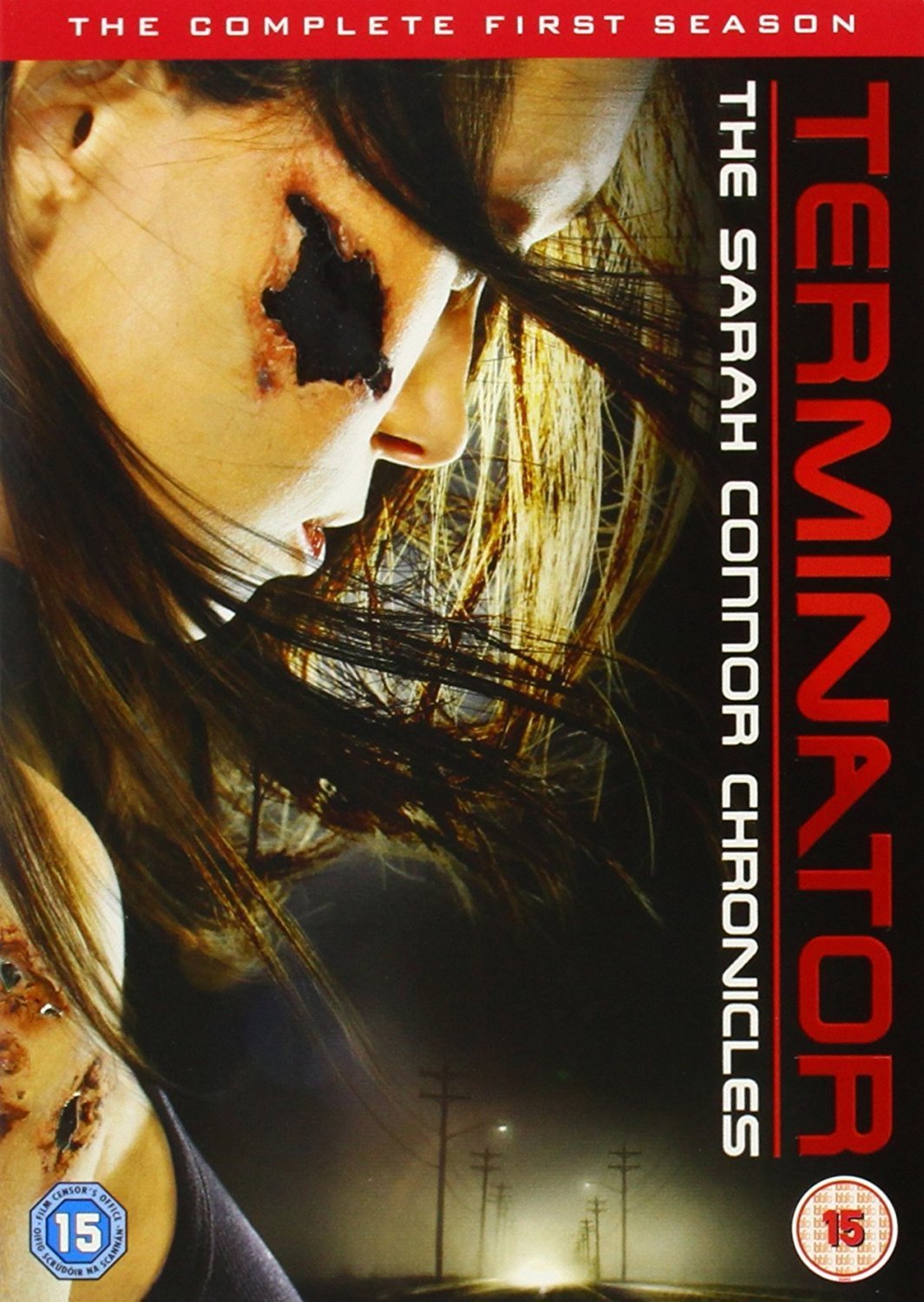 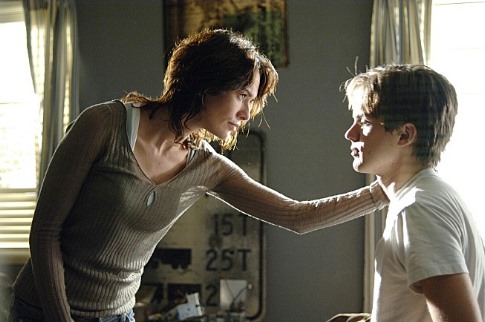 When I heard that a TV series based on the Terminator franchise was in the works, I didn’t holding out much hope that it would be very good. Don’t get me wrong, I like the franchise. I was blown away by Terminator when I saw it during the original theatrical release and was astounded that the second film was as good, if not better, than the original. The third film was wretched however, and I just couldn’t see how they could work a TV series around the premise without it getting silly. After a bumpy first episode however, Terminator: The Sarah Connor Chronicles surprised me. It turned out to be an intelligent yet fun look at the Terminator universe that works quite well.Starting a while after the events that took place in Terminator 2, Sarah (Lena Headey) and her son John Connor (Thomas Dekker), the boy who will end up being mankind’s only hope in the future have still not settled down. After running for years and years Sarah doesn’t know how to stop. When her current boyfriend proposes she takes John and runs away, one more time.John ends up in yet another new school where he meets Cameron (Summer Glau) a cute girl who seems to genuinely like him. It turns out that she doesn’t have the hots for him so much as that she’s been programmed to protect him. Yes, she’s a Terminator sent from the future, and where there’s a good Terminator, there’s a bad version too, sent to kill John. With Cameron’s help John escapes from a substitute teacher/Terminator but he’s one the run once more.Cameron has a unique idea to get away from the Terminator that’s been assigned to John once and for all: They rob a bank. Inside a series of safety deposit boxes are the ingredients for a time machine. In Cameron’s time, a group of resistance scientists were sent in the past to fabricate a time travel device and hide it in the bank for just such an escape. The small group of Sarah, John, and Cameron lock themselves inside the vault while the robot from the future creates the device and a T-800 Terminator tries to break in. They manage to leap to the year 2007 just at the last moment, but unbeknownst to them the head of the Terminator travels with them.Neatly bypassing the events of T-3, the series jumps to the present time where Sarah is still alive and John isn’t a drug addict but the war with the robots still impending. Of course there are still dangers. The head that came into the present with them goes about trying to refashion a body for itself. There’s also a group of fighters sent into the past to aide John and Cameron, but when they are located, it’s too late; all but one of their number has been slaughtered by a Terminator.With several interesting subplots that carry through the season, included finding the maker of a chess computer that may have started the great war and staying one step ahead of an FBI agent who has been chasing the Connors for years, this show packs a lot of excitement into the nine episodes (the season was cut short by the writer’s strike.) It definitely gets better as it goes along too. The writers become more familiar with the characters and the writing gets tighter and the show more enjoyable.The acting is very good across the board. Lena Headey isn’t a Linda Hamilton look-alike but she manages to capture the strengths of the character as Hamilton did and still make it her own. Over the course of the series she manages to show Sarah’s vulnerable side, something that surely exists but rarely peaked out in the movies. Though Sarah’s name is in the title, the show would have crumbled without a good actor playing John, and Thomas Dekker manages to pull off the difficult role. He has to be strong and independent, but not fool-hardy. Dekker gives John those traits, while still making him act like a teenager with an over protective mother. Some of the best scenes are where John is trying to deal with his mother, something that every teenager has problems with.Summer Glau will be instantly recognized from Firefly. I loved her in that show, but was a bit disappointed that she basically plays the same role in this series. She has the same “not sure what’s going on” look as River did, and I was hoping to see her play a different role here. Even if it is the same character essentially, Summer pulls it off well. Though not at all Summer’s fault, the writers did put the “small waif-like girl kicks the big burly man’s ass” scene in the series a bit too often. Yeah, it’s funny, but after a while it becomes trite. 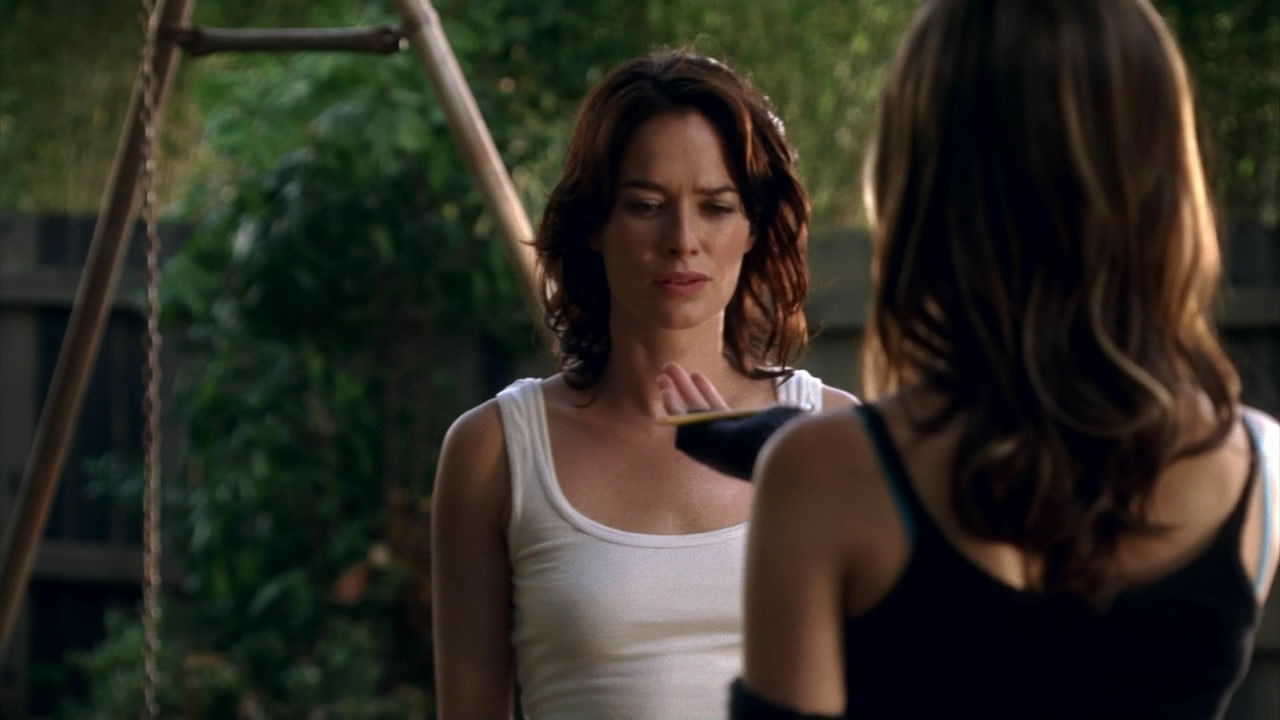 I wasn’t expecting much from this show. After all, how could you make a weekly series that could compete with the first two movies? The creators managed to pull it off and made a show with some intelligent plots and interesting stories. There are a few surprises along the way that add a lot to the show, and make this a must-buy for fans of the Terminator franchise.