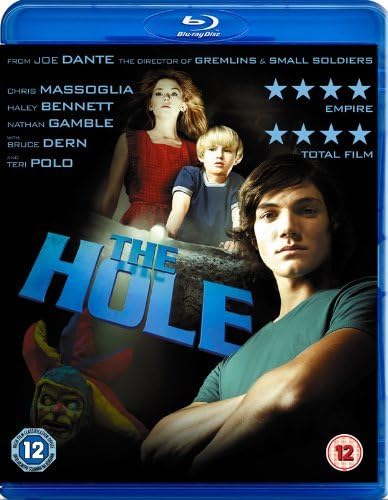 17-year-old Dane Thompson, his 10-year-old brother Lucas, and their mother, Susan, move from Brooklyn to the quiet town of Bensenville where Dane and Lucas befriend their next door neighbor, Julie. While exploring their new home, Dane and Lucas discover a trapdoor with several locks along each side in the basement. Opening the trapdoor reveals a hole which appears to be bottomless. Over the next few days, each child experiences strange events. Lucas, having a fear of clowns, discovers a jester puppet on his bed, as well as other locations, as if it is following him. Julie begins to see an injured girl who bleeds from her eyes. Dane starts to see shadowy figures of a large man. Eventually, all three witness the injured girl together at the boys’ home where they follow her to the basement and watch as she crawls into the hole.Julie suggests they seek help from the previous owner of the house, Creepy Carl, who now lives in an abandoned glove factory surrounded by hundreds of lights and lamps. When the kids tell him that they have opened the hole, he berates them for releasing the evil inside stating that it will come for them and kill Dane. Later that night, Carl is seen scribbling in a sketchbook, almost blacking out entire pages. Carl screams, “I’m not done yet!” as the light bulbs around him pop. The sketchbook turns out to belong to Dane, who returns to the factory to retrieve it. He finds his sketchbook in the darkness; Creepy Carl is gone. Julie decides to get the group relaxed and throws a pool party. While under the water, Dane sees a shadowy figure of a giant man standing above. Once out of the pool, he notices a trail of muddy footprints which he and Julie follow, leaving Lucas alone in the pool. They hear Julie’s pet dog, Charlie, barking and return to see Lucas drowning. Lucas tells them that the jester puppet had pulled him under.Later that night, while Lucas is asleep, Dane sees a hand-shaped bruise on Lucas’ leg. He discovers that it is identical to a hand that Creepy Carl had drawn in the sketchbook. As he flips through the sketchbook, he realizes that each page is a puzzle piece. While working on the puzzle, Dane hears someone whistling. When he walks into the kitchen, he sees an envelope addressed to him from the New Jersey State Penitentiary. A note inside reads ‘HELLO BOY’. He rushes upstairs to Lucas and tells him that someone is in the house. While Dane investigates, Lucas meets a police officer standing at the bottom of the stairs. The officer shows Lucas a picture of two little girls and asks if he has seen one of them and points to the girl whom Julie first encountered. The police officer leaves the picture with Lucas and turns to leave revealing the back of his head is missing. Lucas fetches Dane and the pair watch the cop return to the basement and climb into the hole.Next door, the girl then appears in Julie’s room. Julie climbs out of her window and meets the boys where she reveals to Dane that she and her best friend Annie were playing on the tracks of an old roller coaster which resulted in an accident where Annie fell to her death. In an attempt to help Julie, a police officer had also fallen and was killed. She decides to return to the amusement park where the accident occurred stating “I know what I need to do now.” Dane goes after her telling Lucas to stay at home.Julie finds her friend sitting on the same spot from which she fell. After Julie helps Annie understand that she had tried to save her, Annie disappears and is pleased that Julie is no longer scared. Meanwhile, Lucas hears Dane calling him to the basement. Confused, he follows the voice to discover the jester puppet mimicking Dane’s voice. The puppet attacks Lucas but is outwitted and eventually destroyed. Dane and Julie return and Lucas announces that he is no longer afraid of clowns. Dane then tells them of a theory that once you look into the hole it somehow knows you and creates whatever you are afraid of. When asked what he’s afraid of, Dane replies that he is not afraid of anything.

Julie then invites Dane and Lucas to stay at her place for the night. As Lucas is gathering his things, Dane shows Julie the puzzle he had been working on. They solve the puzzle together and see a boy being grabbed by a giant man. Dane rushes upstairs to find that Lucas is gone. Dane finally reveals that he is afraid of his father, who had abused the entire family and is now in prison. Realizing that his father has taken Lucas into the hole, Dane jumps into the hole as well. Dane finds Lucas hiding in the closet of a twisted version of a home. Their father, who has become a giant, discovers them and starts to break through the door. They turn around and discover the shelving seems to be a ladder. Dane tells Lucas to start climbing. Dane starts to follow, when his father drags him back down. As Dane fights him off, the giant father slowly returns to his actual size as Dane starts to confront his fear, seeing him for what he really is. Their surroundings begin to crumble and the floor falls away leaving Dane and his father trapped on an island under a ceiling fan. Having taken his father’s belt, Dane pulls himself onto the fan and gives the crumbling floor one final blow with the belt buckle causing the floor to break apart and the father to fall.

Dane emerges from the hole where Julie and Lucas are waiting. They close the hole, just as their mother comes down to the basement. She sees the trapdoor and opens it, revealing a shallow crawl space below. As the group heads upstairs, Lucas asks his mom if she is afraid of anything. She replies that she was afraid of a monster under her bed when she was a little girl. Lucas says, “Uh oh,” as the trapdoor blows opens again revealing the darkness has returned.

Before watching this I’d seen a few bad reviews, but now I don’t know why; it’s a good family horror. There’s no massive scares, but the plot is good, delving into the fears of the characters well. The beginning is done well, leaving you guessing as to what is down the hole, but after that I can’t say I was ever bored through it either, I think it is a good length and filmed well, keeping you in suspense throughout.