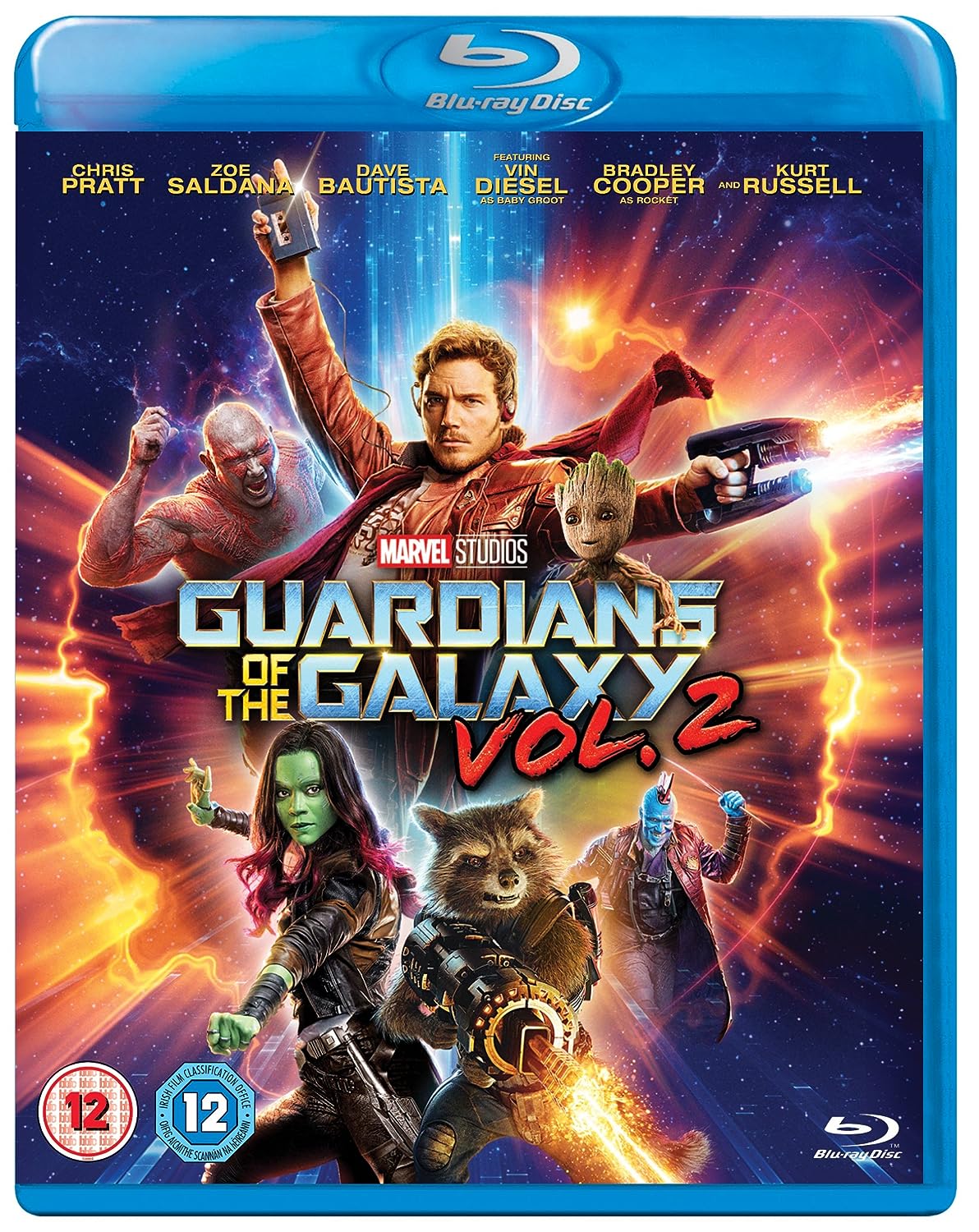 In 2014, Peter Quill, Gamora, Drax, Rocket, and Baby Groot are renowned as the Guardians of the Galaxy. Ayesha, leader of the Sovereign race, has the Guardians protect valuable batteries from an inter-dimensional monster in exchange for Gamora’s estranged sister Nebula, who was caught attempting to steal the batteries. After Rocket steals some for himself, the Sovereign attacks the Guardians’ ship with a fleet of drones. The drones are destroyed by a mysterious figure, but the Guardians are forced to crash-land on a nearby planet. The figure reveals himself as Quill’s father, Ego. He invites Quill, who is accompanied by Gamora and Drax, to his home planet, while Rocket and Groot remain behind to repair the ship and guard Nebula.Meanwhile, Ayesha hires Yondu Udonta and his crew, who have been exiled from the greater Ravager community for child trafficking, to recapture the Guardians. They capture Rocket, but when Yondu shows reluctance to turn over Quill, his lieutenant Taserface leads a mutiny with help from Nebula. Taserface imprisons Rocket and Yondu aboard Yondu’s ship and executes his loyalists while Nebula leaves to track down and kill Gamora, whom she blames for all the torture inflicted on her by their father, Thanos. While imprisoned, Rocket and Yondu bond. Groot, together with Yondu’s loyalist Kraglin, frees Rocket and Yondu and they destroy the ship and its crew as they escape, though not before Taserface tips off the Sovereign fleet.Ego explains he is a god-like Celestial, an immortal consciousness that manipulated the matter around it to form the planet with itself at the core. Forming a human guise, he traveled the universe to escape his loneliness and discover a purpose, eventually falling in love with Quill’s mother Meredith. Ego hired Yondu to collect the young Quill after Meredith’s death, but the boy was never delivered and Ego had been searching for his son ever since. He teaches Quill to manipulate their Celestial power. Nebula arrives at Ego’s planet and tries to kill Gamora, but fails and the pair reach an uneasy alliance when they discover caverns filled with skeletal remains. Ego reveals to Quill that in his travels he planted seedlings upon thousands of worlds which can terraform them into new extensions of himself, but they can only be activated by the combined power of two Celestials. To that end, he impregnated countless women and hired Yondu to collect the children; Ego killed them all when they failed to access the Celestial power. Quill attacks Ego after Ego reveals that he deliberately caused Meredith’s death. Ego forcefully uses Quill to activate the seedlings, which begin to consume every world.Ego’s pet empath, Mantis, grows close to Drax and warns him, Gamora, and Nebula of Ego’s plan just as Rocket, Yondu, Groot, and Kraglin arrive. The reunited Guardians reach Ego’s brain at the planet’s core, and fight the Sovereign’s arriving drones. Rocket makes a bomb out of the stolen batteries that Groot plants on Ego’s brain, while Quill battles Ego with his newfound Celestial powers to allow the other Guardians to escape. The bomb explodes, killing Ego and causing the planet to disintegrate. Yondu sacrifices himself to save Quill, who now realizes Yondu did not deliver him to Ego in order to spare him from the fate of Ego’s other progeny, and that Yondu was Quill’s true “daddy”. Having reconciled with Gamora, Nebula still chooses to set out and attempt to kill Thanos. The Guardians hold a funeral for Yondu, which is attended by dozens of Ravager ships, acknowledging Yondu’s sacrifice and accepting him again as a Ravager.In a series of mid- and post-credit scenes, Kraglin takes up Yondu’s telekinetic arrow and control fin; Ravager leader Stakar Ogord, inspired by Yondu’s sacrifice, reunites with his ex-teammates; Groot starts growing back to normal size, exhibiting typical teenage behavior in the process; Ayesha creates a new artificial being with whom she plans to destroy the Guardians, naming him Adam; and a group of uninterested Watchers listen to their informant discussing several experiences on Earth.If you enjoyed the first volume, you would enjoy this one even better. I would recommend you to watch the first one before seeing this one to have a better understanding on the movie. Though I am pretty sure that most likely you would have seen it. I am confident that you will be entertained.