As The Breed opens, five friends arrive on a remote island via sea-plane. Brothers John (Oliver Hudson) and Matt (Eric Lively) have inherited their late uncle’s cabin on the island and they’ve brought three friends, Nicki (Michelle Rodriguez), Sara (Taryn Manning), and Noah (Harper Hill), along for a vacation. The group makes themselves at home in the rustic setting and begin to have a good time. Sara is delighted when she finds a puppy. But, things get ugly when a bigger dog arrives and attacks Sara. While the group is stunned, they assume that this was the puppies mother and the attack was quasi-justified. However, they learn the truth when the cabin is suddenly surrounded by big, vicious dogs who have apparently been trained to kill.

The factor which makes The Breed watchable is that it’s a well-made movie. Director Nicholas Mastandrea makes his feature-film debut here, but he’s worked with Wes Craven since 1991 and before that, he worked with George Romero. (The “Wes Craven Presents” tag means that Craven is one of a long line of executive producers.) So, the man has spent plenty of times on the set of horror films. And he proves this by showing a true understanding of the beats necessary in a scary movie. While some other aspects of the movie may fail,  The Breed has alot of  jump scares. These dogs can attack at anytime and anywhere.

The Breed doesn’t pull any punches in showing the humans fight back against the dogs. If you’ve ever wanted to see a film where a character wasn’t T frozen with fear when charged by a vicious dog, then this is the movie for you. There is very little gore here, but the animal violence is extremely shocking. 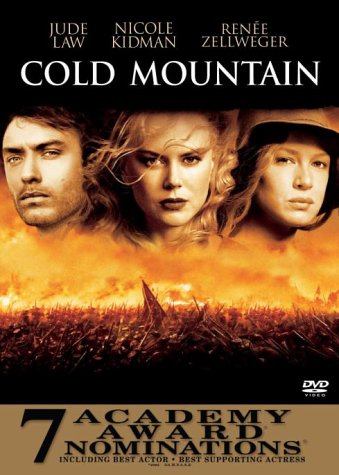 When North Carolina secedes from the Union on May 20, 1861, the young men of a rural, provincial, North Carolina backwater known only as Cold Mountain hurry to enlist in the Confederate military. Among them is W.P. Inman (Jude Law), a carpenter who has fallen in love with Ada (Nicole Kidman), a minister´s daughter, and finds their whirlwind courtship interrupted by the American Civil War.

Three years later, Inman finds himself in the trenches of Petersburg, Virginia, during the Battle of the Crater. Union soldiers tunneling beneath Confederate fortifications detonate over 300 kegs of gunpowder, in a futile attempt to undermine the position prior to their assault. As the ill-fated attack begins, Oakley (Lucas Black) an old acquaintance of Inman’s from Cold Mountain, is impaled on a bayonet and mortally wounded. Inman rescues him from the fighting and takes him to a field hospital. Later that day Oakley dies in the hospital, with Inman and Stobrod Thewes (Brendan Gleeson) beside him. The next night, Inman, along with his Cherokee friend Swimmer (Jay Tavare), are sent to flush out surviving Union troops trapped behind their lines. During the raid, a burst of friendly fire kills Swimmer and seriously injures Inman. As Inman lies in the hospital near death, he has a letter from Ada read to him in which she pleads with him to stop fighting, stop marching, and come back to her. Inman recovers, and—with the war drawing ever closer to an inevitable Confederate defeat—decides to go home to Cold Mountain.

On his journey he meets the corrupt preacher Reverend Veasey (Philip Seymour Hoffman), who is about to drown his pregnant slave lover. Inman stops Veasey, and leaves him tied up to face the town’s justice. Exiled from his parish, Veasey later rejoins Inman on his journey. They help a young man named Junior (Giovanni Ribisi) butcher his cow, and join him and his family for dinner. Junior leaves the house after the feast, the women in Junior’s family seduce Veasey, and Junior’s wife, Lila, tries to seduce Inman. Junior returns home with the Confederate Home Guard, and both Inman and Veasey are arrested and led away with other deserters. During a subsequent skirmish with Union cavalry, Veasey is killed and Inman left for dead. An elderly hermit living in the woods (Eileen Atkins) finds him and nurses him back to health.

Inman later meets a grieving young widow named Sara (Natalie Portman), who is raising her infant child Ethan alone; he stays the night at her cabin. The next morning, a party of Union foragers arrive demanding food. Sara orders Inman away for his protection, but he hides only a few feet away from the house. The leader, Nym (Richard Brake), and his lieutenant harass Sara, steal her livestock, and leave Ethan in the cold, though the third soldier (Cillian Murphy) attempts to keep the baby warm. Nym tries to rape Sara but both he and the lieutenant are killed by Inman. Inman forces the kind forager to surrender and lets him go, but as the latter flees, an enraged Sara fatally shoots him. In parallel with Inman’s adventures, the film follows Ada’s wartime experiences. Ada is a city gentlewoman who only recently moved to the rural farm named Black Cove. She met Inman on her first day at Cold Mountain and had a brief, chaste romance with him the night before he left for the army. Shortly after Inman leaves, Ada’s father (Donald Sutherland) dies, leaving her alone on the farm with no money, food, or livelihood, and with little prospect for help, as the young, able-bodied men are off at war.

Ada is completely inept at working the farm, having been raised as a southern lady. She manages to survive thanks to the kindness of her neighbors, one of whom eventually sends Ruby Thewes (Renée Zellweger) to her. Ruby is a young woman who has lived a hard-scrabble life and is very adept at the tasks needed to run the farm. Ruby lives at the farm with Ada, and together they take the farm from a state of disaster to working order. Meanwhile, Ada writes constant letters to Inman in hopes of meeting him again and renewing their romance. The two women form a close friendship and become each other’s confidantes. They also are friends with the Swangers (James Gammon and Kathy Baker), who live down the road from Ada’s farm Black Cove. It is at the Swangers’ well that Ada “sees” a vision of Inman coming back to her in the snow, surrounded by crows.

During the war, Ada and Ruby, and other members of their community, have several tense encounters with men of the Home Guard. This branch of the Home Guard is led by Captain Teague (Ray Winstone), whose grandfather once owned much of Cold Mountain. He and his deputies hunt deserters, partially with the goal of Teague’s seizing their land. Teague also lusts after Ada. Although the purpose of the Home Guard was to protect the South and its citizen population from the North, they have become violent vigilantes who hunt and often kill deserters from the Confederate Army, and terrorize citizens who they believe are housing or helping the deserters. This includes the Swangers’ sons, who, by torturing their mother, they coax out of hiding and kill. Esco Swanger—the family patriarch—is also killed protecting his sons.

Ruby’s estranged father Stobrod, a Confederate deserter and a violin player, arrives, reconciles with her, and convinces her to make a coat for his intellectually challenged banjo player Pangle (Ethan Suplee). Ruby finds herself drawn to mandolin player Georgia (Jack White). While camping, Stobrod, Pangle, and Georgia are cornered by the Home Guardsmen led by Teague. Pangle unintentionally reveals the band as the deserters Teague is seeking. Georgia is hidden a few feet away and witnesses the shooting of Pangle and Stobrod. He escapes to Black Cove Farm and informs Ruby and Ada, who rush to the campsite to find Pangle dead and Stobrod badly injured. Ada helps Ruby remove a bullet from Strobrod’s back, and they decide to take shelter in some cabins in the woods to avoid Teague and his men.

At this point the two story lines come together. Inman, half-dead from starvation, finally reaches Cold Mountain and is almost killed by Ada before she recognizes him. They later consummate their love and spend the night together.  The Home Guardsmen, however, soon find them, having captured and tortured Georgia to learn that the women are harboring deserters. In the ensuing gunfight Inman ambushes and kills Teague and most of his band, but Teague’s violent young lieutenant Bosie (Charlie Hunnam), escapes up the mountain. Cornering him near the top, Inman urges him to surrender peacefully, but Bosie draws, forcing him to fire; both men are mortally wounded. Ada goes after Inman, and finds him just as she saw him in her vision at the well… coming back to her in the snow surrounded by crows. He dies in her arms. The film ends several years later with Ada, Ruby and their families celebrating Easter. Ruby has married Georgia, and the two have a young daughter and an infant child. It is also revealed that Ada’s night with Inman has produced a child, Grace Inman.

A very intense and sometimes moving movie experience with a brutal battle sequence, and indeed many further violent incidents both at Cold Mountain itself and indeed on ‘Inman’s’ journey. The film harbours many fine performances from it’s star-studded cast-list. Well worth a re-visit or indeed a first viewing.