During the Clone Wars, Jedi Knights Anakin Skywalker and Obi-Wan Kenobi lead a small Republic clone army against the Separatist droid army on the planet Christophsis. Awaiting reinforcements, the two Jedi greet a shuttle carrying the young Jedi Ahsoka Tano, who insists that she has been assigned by Jedi Master Yoda to serve as Anakin’s Padawan. Anakin begrudgingly accepts Ahsoka’s apprenticeship, and the two succeed in deactivating the Separatists’ energy field while Obi-Wan stalls the droid army commander, allowing a Republic victory, which makes Ahsoka earn Anakin’s respect.

Following the battle, Yoda arrives and informs the Jedi that crime lord Jabba the Hutt’s son Rotta has been kidnapped. Anakin and Ahsoka are tasked with retrieving the Huttlet, while Obi-Wan is sent to Tatooine to negotiate with Jabba over a potential treaty between the Hutts and the Republic. Anakin and Ahsoka find Rotta on the planet Teth, where they are ambushed by Separatist forces led by Count Dooku’s apprentice Asajj Ventress, discovering that Dooku hopes to frame the Jedi for Rotta’s kidnapping. The Jedi manage to escape the trap along with R2-D2 and hijack a derelict transport with which they travel to Tatooine. Obi-Wan, alerted by Anakin, arrives on Teth and defeats Ventress in a lightsaber duel, though she manages to escape.

Meanwhile, Senator Padmé Amidala, Anakin’s secret wife, learns of Anakin’s mission and fears for his safety. She decides to contact Jabba’s uncle Ziro in Coruscant. The Hutt refuses to cooperate, apparently believing that it is the Jedi who are responsible for the situation. Padmé, however, soon discovers that Ziro has actually conspired with Dooku to have Rotta killed in order for Jabba to have Anakin and Ahsoka executed in return, which will force the Jedi Council, led by Yoda, to take Jabba into custody and allow Ziro to seize power over the Hutt clans. Padmé is discovered and detained, but a chance call by C-3PO enables her to summon a squadron of clone troopers, and Ziro is arrested.

Upon their arrival on Tatooine, Anakin and Ahsoka are shot down by MagnaGuards. Anakin devises a ruse to confront Dooku while carrying a decoy Rotta, leaving Ahsoka to take the real Rotta to Jabba’s palace. While Anakin fights off Dooku, Ahsoka is ambushed by the MagnaGuards, whom she defeats. The two deliver Rotta safely to Jabba, who nonetheless orders the Jedi’s execution for their supposed attempt to kidnap him. However, Padmé contacts Jabba in time and reveals Ziro and the Separatists’ responsibility for the kidnapping. Acknowledging the Jedi’s heroism and allowing the Republic to have Ziro punished for his betrayal, Jabba agrees to the Republic treaty while Anakin and Ahsoka are retrieved by Obi-Wan and Yoda. In the meantime during his escape, Dooku reports to his master Darth Sidious about the failure of their plot against the Jedi and Jabba, but the Sith Lord assures to him that the tide of war is still in their favor.

Lucasfilm Animation, director Dave Filoni, and screenwriter Henry Gilroy have crafted the perfect summer animated film, “Star Wars: The Clone Wars”, which is a more than adequate sequel to the “Star Wars” prequel trilogy, set between Episodes II and III. To be perfectly honest, I wasn’t expecting much, but left quite impressed with the quality of much of the animation. I was also surprised with the amount of screen time given to Count Dooku (voiced by Christopher Lee), as well as Samuel L. Jackson (General Mace Windu) and Anthony Daniels (C-3PO) (Daniels has now the distinction of appearing in every “Star Wars” film.). 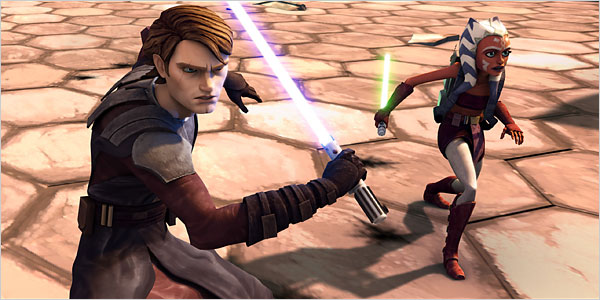 “Star Wars: The Clone Wars” captures successfully much of the excitement found in the original trilogy and in “Star Wars – Episode III: Revenge of the Sith”. Moreover, it offers more amazing battle sequences and light saber duels than seen in the live action films thanks to state-of-the-art animation technology. Where “Star Wars: The Clone Wars” fails is in some of its insipid dialogue, and the rather curious introduction of the inexperienced Ahsoka Tano as Anakin’s padawan (Jedi apprentice), who comes across more as a spoiled brat than a genuine Jedi warrior in training. And yet, with these few glaring defects, this remains a film which I can recommend highly to those who are diehard “Star Wars” fans and others seeking high quality cinematic entertainment that’s suitable for the entire family.