As a crime wave rises in New York City, Channel 3 news reporter April O’Neil talks about rumors of young children and teenagers being reported as the majority of the thieves, connecting it to a rumored Foot Clan, which originated in Japan. On an ordinary night, she comes across thieves stealing from a news van and is attacked. She is rescued and one of her rescuers leaves behind a sai as police arrive to collect the tied up criminals. In the storm sewers, four anthropomorphic turtles return to their underground home and meet with their master Splinter, who advises them to remain hidden from the world and work only in the shadow. Raphael admits he lost his weapon, and when the others order pizza he leaves in disguise to see a movie. After leaving the movie, he encounters Casey Jones who tries to exact justice on a pair of muggers by beating them with sporting implements. After a brief stand off between the two, Casey takes off into the city and Raphael loses his temper. Returning home, Splinter confronts Raph about his temper.

April is attacked in the subway by members of the Foot, after spouting rumors of them on television. She is knocked unconscious while trying to fend them off but is saved by Raphael, who takes her back to their home. After calming her down, Splinter explains their origins and introduces her to Raphael, Michaelangelo, Donatello and Leonardo. Unfortunately, Raph had been followed by a member of the Foot. After the turtles take April home, and spend some time over pizza, they return to find their home demolished and Splinter missing. With nowhere else to turn, they return to April’s apartment. The next morning, April’s supervisor Charles Pennington and his son Danny arrive; Charles chides April on her behavior with police chief Sterns and advises her to be careful, while Danny catches a glimpse of Michaelangelo, garnering his suspicions. Later, Charles confronts Danny for being arrested for stealing and Danny runs away into the subway. He escapes to a warehouse on Lairdman Island, the hideout for the teenaged thieves of the Foot. It is revealed that Splinter is there, held prisoner by The Shredder, who acts as a surrogate father to the outcast teenagers. Danny gives The Shredder his information on the Turtles.

After a heated argument between Leo and Raph, Raph goes up to the roof of April’s building and is attacked by dozens of Foot Clan members. The fight moves into the building, where April and the others are attacked after Raph is thrown down a skylight window. The numbers cause the floor to give way, and they continue their battle in the basement. After Foot reinforcements arrive, overwhelming the turtles, Casey appears, having seen Raph earlier on the roof and he helps even the odds. In the melee, with Raph in a coma, the building catches fire, forcing the Turtles to escape. Retreating to an abandoned farm April’s family owns, April learns that Charles has fired her from the television station. Raph awakens from his coma and makes amends with Leo. The four of them train. After receiving visions from Splinter, Leonardo and the rest decide it is time to return to the city. Meanwhile, Danny encounters Splinter, whose kindness casts doubts on his decision to betray the Turtles. He goes to hide in the Turtles’ den, and is there when they return. In the night, Danny slips away, followed by Casey who discovers the thieves’ hideout. Danny meets with Splinter again, who tells him the story of his master who was killed by a man named Oroku Saki; who is The Shredder’s alter-ego. He inadvertently warns Shredder that the turtles have returned and they raid the Turtles home. They are ambushed however as the group is lying in wait for them.

Casey and Danny free Splinter, and after Casey defeats Shredder’s second in command Tatsu, they convince the teens to follow them and teach them the error of their ways. They return to the city as the Turtles face off against Shredder, who outmatches them. The Shredder taunts the Turtles, saying he killed Splinter, causing Leo to attack Shredder. Shredder disarms Leo, threatening to impale him with his spear unless the Turtles drop their weapons. The Turtles do so, but Shredder plans on killing Leonardo anyway. Before he can do so, he is distracted by Splinter, allowing Leo to escape. Splinter then faces Shredder, revealing his identity as the rat who belonged to Hamato Yoshi. Shredder charges Splinter in his rage and falls over the ledge of the roof. Splinter tries to spare him, but Shredder attacks, forcing the rat to let go, and he falls into a garbage truck. Casey turns on the trash compactor and crushes Shredder. 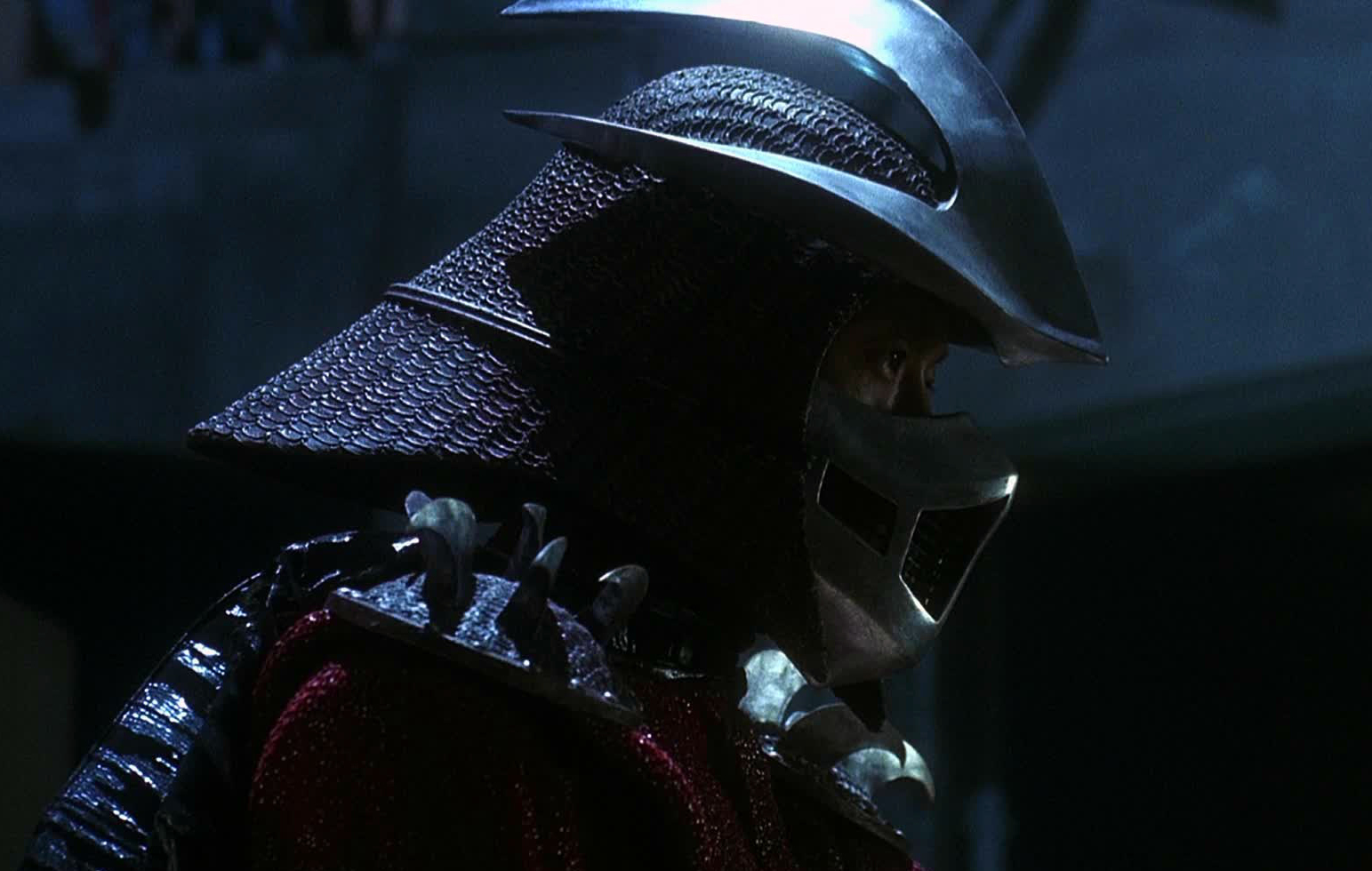 The police arrive and arrest the defeated Foot Ninjas. April is reinstated by Charles, with better perks, to cover the story. Danny reunites with his father who is overjoyed to see him, but Danny insists on being called “Dan” as a sign that he’s grown up. Casey and April meet, and she tells him to kiss her, which he obliges, much to the cheering from the Turtles (except for Mikey).

This is a film that rather lovingly invites the viewer into the wacky and wonderful world of the Turtles, and provides some hyperbolic action sequences in the best ninja tradition, without ever taking itself very seriously.