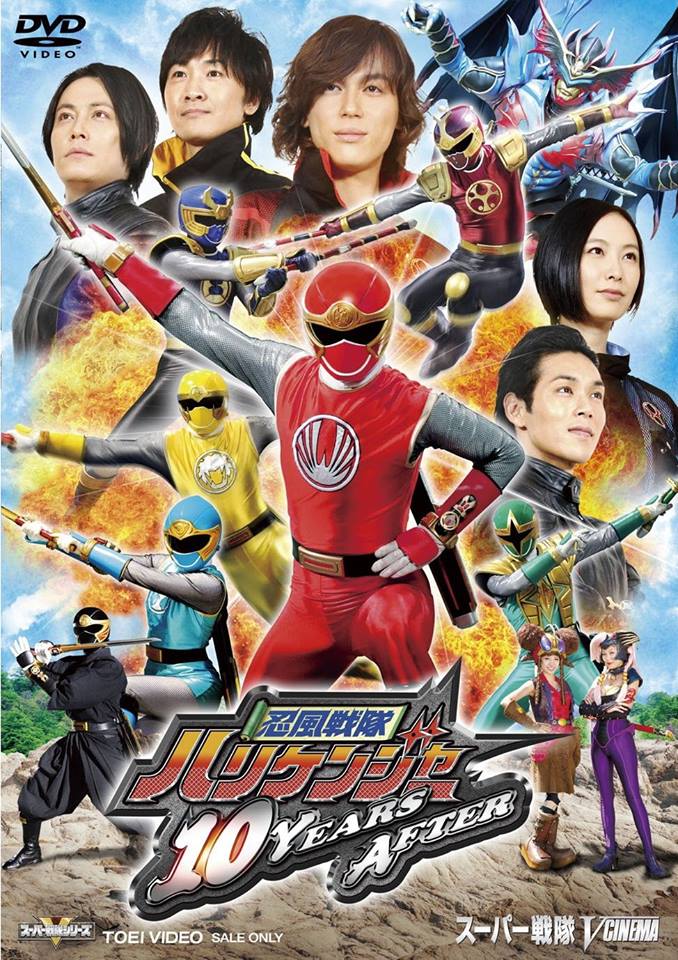 While Nanami was taking a shower, Kouta was in the living room and a voice mail comes in from a man named Hase saying that the acting role she auditioned for, isn’t what he wanted but he tells her she’ll have another chance. Just then Kouta gets a phone call from his kids and tells them that he’s stuck at work, Nanami screams and sees a bat with her Hurricane Gyro and chases after it the kick it and the bat dropped it. The bat became a monster and begins to take her Shinobi Medal but is called back quickly. Before leaving he says he’s part of the Seven Dark spears, one of the Jakanja, and yet not, the Zero Spear, Bat Zhe Rumba. 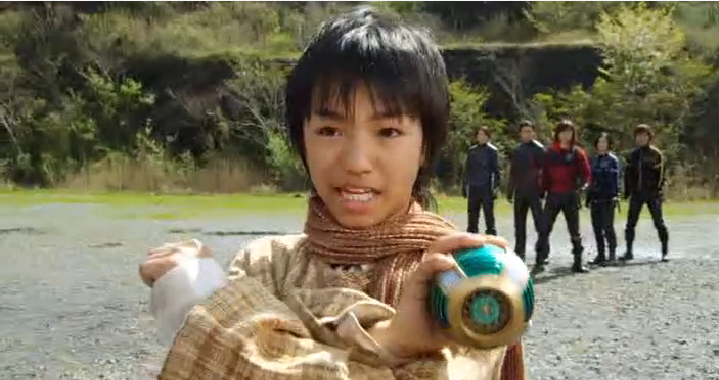 Meanwhile at night club which Ikkou sing a song with a band named Junretsu and Isshu hang out with ladies. However one of the ladies looked familiar to them and just then, a black figure with a black HurricaneRed helmet appears and used a sword technique. The Gouraiger brothers find their Shinobi Medals gone and found out that sword technique was the Kabuto Lighting wave that Ikkou taught Yousuke. The black figure turns into Yousuke and hands the medals to the lady who transforms into Furabiijo. Yousuke then says the last ten years he spent with his teammates were a mistake before vanishing. Nanami and Kouta arrive at Yousuke’s office and finds it empty with pictures of him all over the world and TOP SECRET files on his desk each one about different Unified Universal Ninja School branches around the world. Then a boy appears at the door and says that hero’s will die but then glitches and asks Yousuke for his help.

Meanwhile Furabiijo puts the Gouraigers’ medals on a Jakanja logo which held the young boy who appeared in Yousuke’s office on a cross shocking him. Meanwhile, Nanami and Kouta fly around the city to find out what is going on. Yousuke presses a button to destroy a building but the two Hurricanegers said they disarmed it and capture Yousuke to be be brought to a meeting. Inside a subspace like room, a woman behind curtains asks what Yousuke was doing but then, Hinata and Oboro appear and were told they weren’t called for the meeting. Kouta says that him and Nanami were attacked by a Jakanja yet not. He also told he was after the Shinobi Medals and said the Gouraigers lost theirs and said Yousuke took them. Nanami then says they saw a young boy outside of Yousuke’s office. Just then Rumba appears and Oboro claims there was a man that joined the rank of the Jakanja and was the most skilled warrior of the Unified Universal Ninja school. The Hurricanegers then find out that Yousuke let his teammates capture him. Then Yousuke looks under the curtains and finds a lady who was a relative to Lady Gozen and takes the Shurikenger Shinobi Medal. Yousuke tells Rumba to release Tenkai and the boy appears but realizing it was a hologram. Rumba disappears and the Hurricanegers are teleported to Shinobi Valley.

The Hurricanegers wanted answers and Yousuke tells them the boys name was Tenkai, a boy he found unconscious on the shore of a beach and he joins him on his adventures but refused to go to the hospital. One day Yousuke find Tenkai captured by Rumba and shows him a flashback from ten years ago after the Hurricanegers and Gouraigers defeated an enemy and showed that Tenkai inherited the blood from the Evil Will to awaken it within him, it needed the power of the Shinobi Medals. After the Gouraigers appeared, they told them about the times they had. Issue told them he knew where the Shinobi Medal because he had a transmitter. Yousuke then rejoins the team to save Tenkai. When they arrive at the layer they find Tenkai was about to awake the Great Will. But Yousuke tells him to remember what they’ve been through and Tenkai breaks free and are teleported out of the layer. Tenkai then fights the Magerappa and the Shurikenger Shinobi medal glows then transforms into the Shuriken ball as he transforms into Shurikenger. He then uses the disappearing technique to retrieve the other five Shinobi medals to return to the Gouraigers and Hurricanegers as they transform and do their role call.

The Hurricanegers fight the Magerappa army and do special techniques that relate to acting, singing, and dancing. But then Bat Zhe Rumba summons two men in black hoods start to attack HurricaneRed and Shurikenger unconscious but they get back on their feet. Shurikenger uses Fire Mode and he and HurricaneRed use Shurikenger’s special move. After that, all six use a Kage no mai attack on Rumba and use all six of their weapons to make the Ten Year Reunion, Final Gadget and destroy Rumba as Furabiijo and Wendinu disappear. Oboro and Mugensai are impressed that the 6 warriors defeated Rumba but he turns in a hamster when he hears he has to pay bills for the damaged branches. During the end credits Yousuke asks the others if they want to look for successors for themselves. Nanami still wants to be a Hurricaneger and continue on her career, Ikkou tells them he still wants to be a Gouraiger and still be part of JUNretsu and Isshuu still wants to be a Gouraiger. Kouta tells them he’s going to tell his kids that he is a Hurricaneger. Yousuke says to keep going at it.

The Hurricanegers reunion is a nice return for this sentai team. This film started a trend of other sentai teams reuniting for reunion special movies.