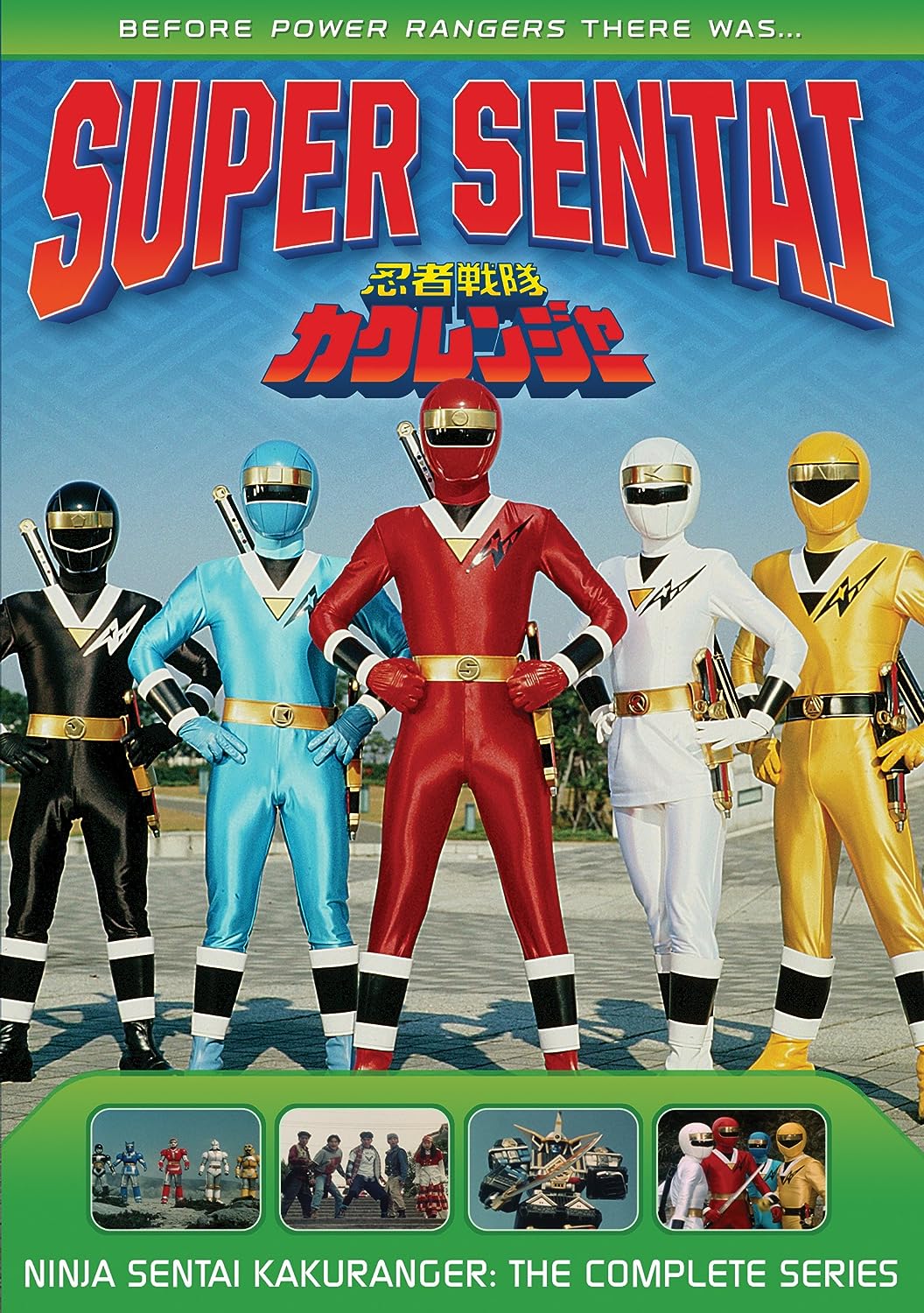 Sho Kosugi (Revenger of The Ninja)

Fans of Japanese Henshin Hero shows (where the protagonists has to change form to gain super powers) have a reason to rejoice, Shout! Factory has released the 18th Super Sentai TV series in its entirety. Now English speaking fans can enjoy the complete Ninja Sentai Kakuranger! Though the name might not be familiar, many people who grew up watching Power Rangers after school will recognize some of the monsters and costumes as some of the action scenes from were used in the third season of Mighty Morphin Power Rangers and the Mini Saga Mighty Morphin Alien Rangers. If you’ve only seen the Americanized version, you should check it out in its original form, as it’s a fun and addictive show.

Four hundred years ago the Youkai (supernatural monsters from Japanese fairy tales) were at war with a group on ninja. The conflict ended when the five most powerful ninja managed to seal the Youkai leader, Nurarihyon, and all of the Youkai energy behind the mystic “Seal Door” trapping him and robbing all of the Earth’s Youkai of the powers forever.

Fast forward to contemporary times. When a powerless but wily Youkai, Kappa, finds two of the decedents the ninja who originally sealed away the Youkai’s power, he tricks them into opening the Seal Door while the protector of the door, a young girl named Tsuruhime, isn’t looking. That not only releases Nurarihyon, but also returns all of the Youkai’s evil powers. After so many years hiding from humans, the Youkai decide it’s time to take their rightful place at the top of the food chain… and that means destroying the human race. The only thing that’s stopping the Youkai is Tsuruhime. Luckily she knows a thing or two. Taking the two young men under her wing, she brings Saizou and Sasuke to a place where their ancestor’s swords are imbedded in the ground. Once they pull them out, they receive Doron Changers that allows them to turn into Kakuranger with ninja powers and abilities. These three track down the other two decendents of the original ninja, Seikai and Jiraiya, and together they form the Kakurangers! Traveling around in a sentient food service trunk that acts and looks like a cat and is named Nekomaru, the group battles the Youkai wherever they appear.

This show follows the pattern laid out by the nearly dozen and a half series that preceded it, but there are some differences that make keep things interesting. As with other Super Sentai shows, the Kakurangers have giant robots that they employ to battle their enemies: the Giant Beast Generals. One difference in this series is that the Rangers have two sets of fighting robots. The second set, that pop up several episodes into the series, are the Beast General Fighters. These more agile and lighter weapons are autonomous and do not have to be piloted by a Ranger (though they can be to gain even more power). Like other shows these Rangers also have motorcycles that they sometimes use, though for some odd reason they are modeled after sharks. This is the first Super Sentai show that has a female team leader too. It was nice to see Tsuruhime in a position of power, and the character fit the role too. She was easily the most level-headed of the five even though she is the youngest.

A monster-of-the-week show for the most part, the program keeps from getting monotonous by slowly filling in some of the background of the rangers and mixing it up with some multi-part stories and story arcs that will thread their way through several episodes. One example of the latter is Dr. Yugami, a mad scientist Youkai who creates new inventions to destroy the Kakurangers. He’s first employed by Tengu, he’s later taken on by a major villain, Young Noble Jr, a punk rock Youkai who causes the Kakurangers no end of trouble. (In his natural form he’s a skeleton warrior named Gashadokuro that Power Ranger fans will recognize as Rita Repulsa’s brother Rito Revolto.)

I have enjoyed the two previous Super Sentai shows that Shout! Factory has released, and this one is no exception.  There’s a lot to like about this show. Like the earlier seasons it’s filled with odd and strange monsters that I really enjoy. My favorites this time around have to be the Dorodoros, the expendable foot soldiers that the rangers often fight before changing. In this series, they are patterned after the character in Edvard Munch’s famous painting The Scream. They have misshapen heads and ovals for eyes and a mouth and when they appear they even hold their hands near their faces as if imitating the picture. It’s just so unexpected to see a reference to an Expressionist painting in a kids show that you have to love it.

Ninja Sentai Kakuranger is still a very fun and enjoyable show. Filled with wacky, bizarre villains and some good action, it’s definitely worth checking out especially if you’re a Power Ranger fan. It gets a very strong recommendation. 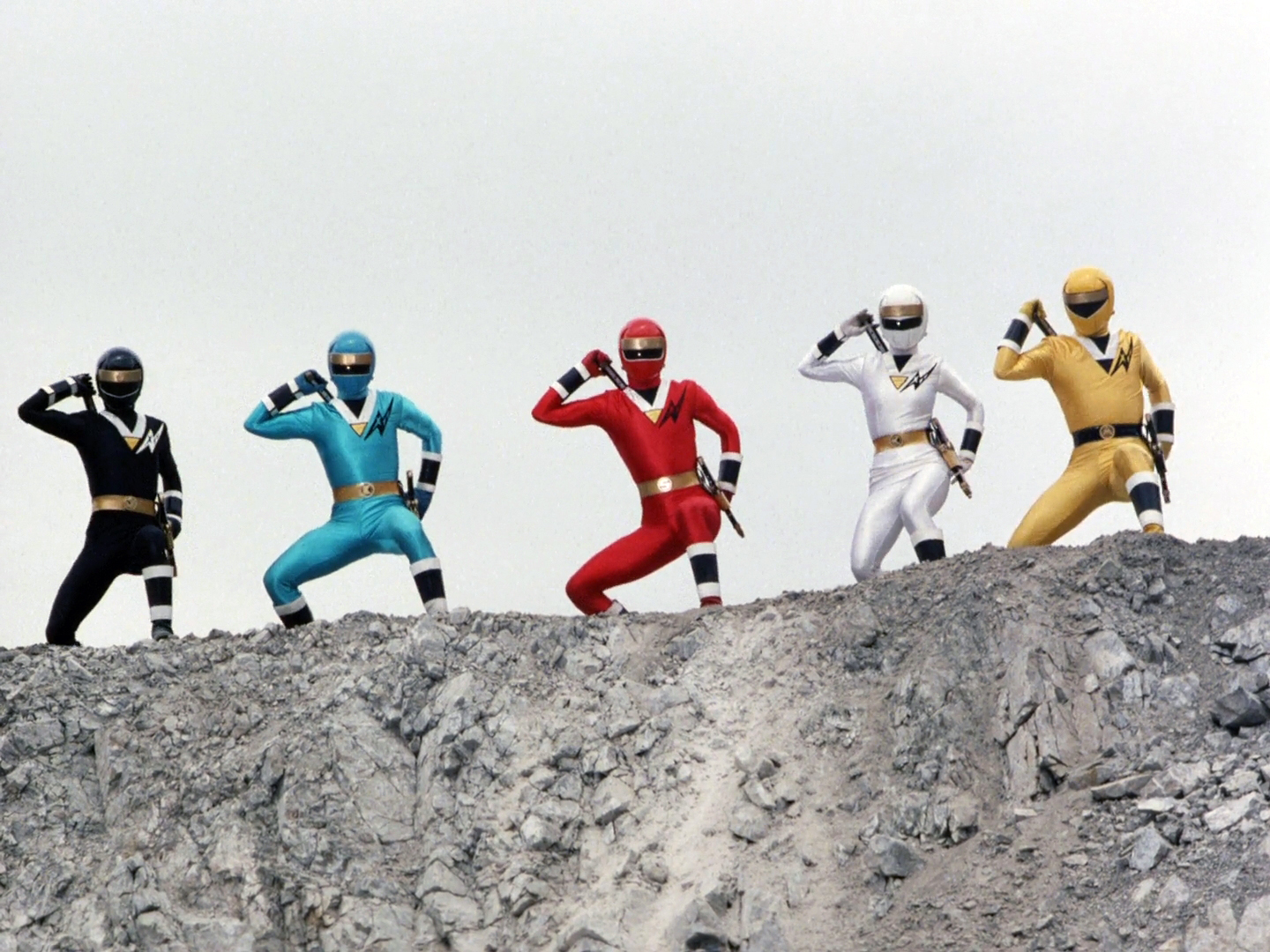