Batman is an odd but fascinating mixture of Batman comic mythos, World War II propaganda and cheaply crafted cliffhanger clichés. Like most all serials of its time, each of Batman’s chapters ended with a scene showing our hero facing seemingly inescapable mortal danger. Of course, Batman always managed to escape this danger in the next chapter, but the only way 1940’s moviegoers could know this for sure was to spend their money on a ticket for next week’s show. Batman starred Lewis Wilson as Batman/Bruce Wayne, Douglas Croft as Robin/Dick Grayson, and J. Carrol Naish as the diabolical Japanese criminal mastermind Dr. Daka. Daka was Batman’s only villain – all 15 chapters of the serial revolved around Batman and Robin’s efforts to find him and bring him to justice. 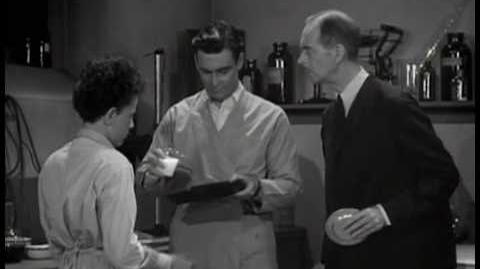 The villain had never appeared in Batman comic stories – he was created specifically for the serial in order to reflect the United States’ preoccupation with World War II. Daka seemed to represent all of the fear and anger that America felt toward Japan after the attack on Pearl Harbor, Hawaii in December 1941 – he was a ruthless and insidiously clever agent of the Japanese government who was determined to see the American way of life wiped off the face of the earth.

Obviously, Batman was trying to bridge a rather uncomfortable gap between real-life threats to America and escapist entertainment. This combination might have seemed appropriate in the heat of the World War II years, but it will surely make modern audiences somewhat uncomfortable –many of the anti-Japanese sentiments found in Batman’s scenes involving Daka come across now as bigoted and hysterical. To make matters worse, like most other serials of its time, Batman was filmed quickly and very cheaply – so not surprisingly, it left much to be desired in terms of its production values. For example, Batman and Robin’s costumes were ill-fitting and badly designed, and they were not even given a Batmobile to drive – they were forced to drive Bruce Wayne’s rather modest-looking convertible around Gotham City while they were fighting crime! Also, many of the serial’s action sequences were unimaginatively staged and unconvincingly executed.

The serial did have its moments, and even more importantly, it was responsible for introducing a number of elements into the Batman mythos that became as vital to the character as his cape and cowl. For example, the Batcave was entirely an invention of the film’s screenwriters. It was actually referred to as the “Bat’s Cave” in the serial, but its name was just about the only element of it that would be changed from the screen to the comic page. In Batman’s first scenes, the Bat’s Cave” was established as Batman’s secret base of operations located under Bruce Wayne’s residence. It was made up of a dimly lit main chamber that featured a bat insignia on one of its rocky walls, and a state-of-the-art crime lab in a separate room. Batman’s “Bat’s Cave” certainly was not as elaborate as the comic book Batcave would become over the years, but it holds the distinction of being Batman’s first official “home.”

Batman was also responsible for creating one of Batman’s most memorable supporting characters – Alfred, Bruce Wayne’s faithful English butler. Alfred, played by William Austin, was an essential but slightly bumbling member of Batman’s crimefighting team and the only person who knew that Bruce and Dick were actually Batman and Robin. Many times during the course of the serial he was called into service to assist them. Batman’s writers likely created Alfred to be a “comic relief sidekick,”. Alfred was unquestionably a “good guy” in the serial, but one who often found himself on the receiving end of Bruce and Dick’s wisecracks and practical jokes. Obviously, over the years Alfred would evolve into a far more respected member of Batman’s inner circle – but Batman marks the moment when the character first entered Batman’s world.

Batman not only featured these Batman “firsts,” it also featured a strong performance by Lewis Wilson as Batman/Bruce Wayne. He brought the character to the screen for the first time in a straightforward, square-jawed action hero manner that at times transcended his ill-fitting Batman costume. And Douglas Croft was equally good as Robin. Croft had one major advantage over every other actor who would play the role – namely, he was closer in age to the character than they were. To date, Croft has been the screen’s only true “Boy Wonder” – he was about 13 years old when Batman was filmed, and his youthful exuberance was perfectly suited for the role. In fact, I think it is worth noting that Batman is the only live-action Batman screen work to feature a juvenile Robin operating within Batman’s world of murder, death and destruction. The serial played up the harder-edged crime drama aspects found in many Batman comic plots of the 1940’s – consequently, the youngster was faced with some pretty horrific scenes in Batman, such as people being buried in mine collapses or devoured by ravenous alligators.

To me, one of the most interesting/amusing things about this DVD release of Batman is the set’s packaging. It features dramatic, sepia-toned artwork depicting Batman and Robin swooping down from out of the sky – to be honest, the artwork is far more stylish and striking than anything found in the serial itself! Obviously, the artwork is a not-so-subtle attempt to market the set as a kind of counterpart to the Batman Begins DVD, which of course features dramatic sepia-toned images of Christian Bale as Batman. Just in case anyone misses Sony’s attempt to connect the two works, there is a tag line displayed prominently on Batman’s back cover that reads “SEE HOW BATMAN REALLY BEGAN!”  The back cover of the Batman DVD set also features a second sepia-toned image of Batman overlooking Gotham City that is a direct trace-over of one of Alex Ross’s paintings found in the wonderful 1999 oversize graphic novel Batman: War on Crime by Ross and Paul Dini. Again, it is a great image, but it gives the impression that Batman is a far more visually stylish work than it actually is!