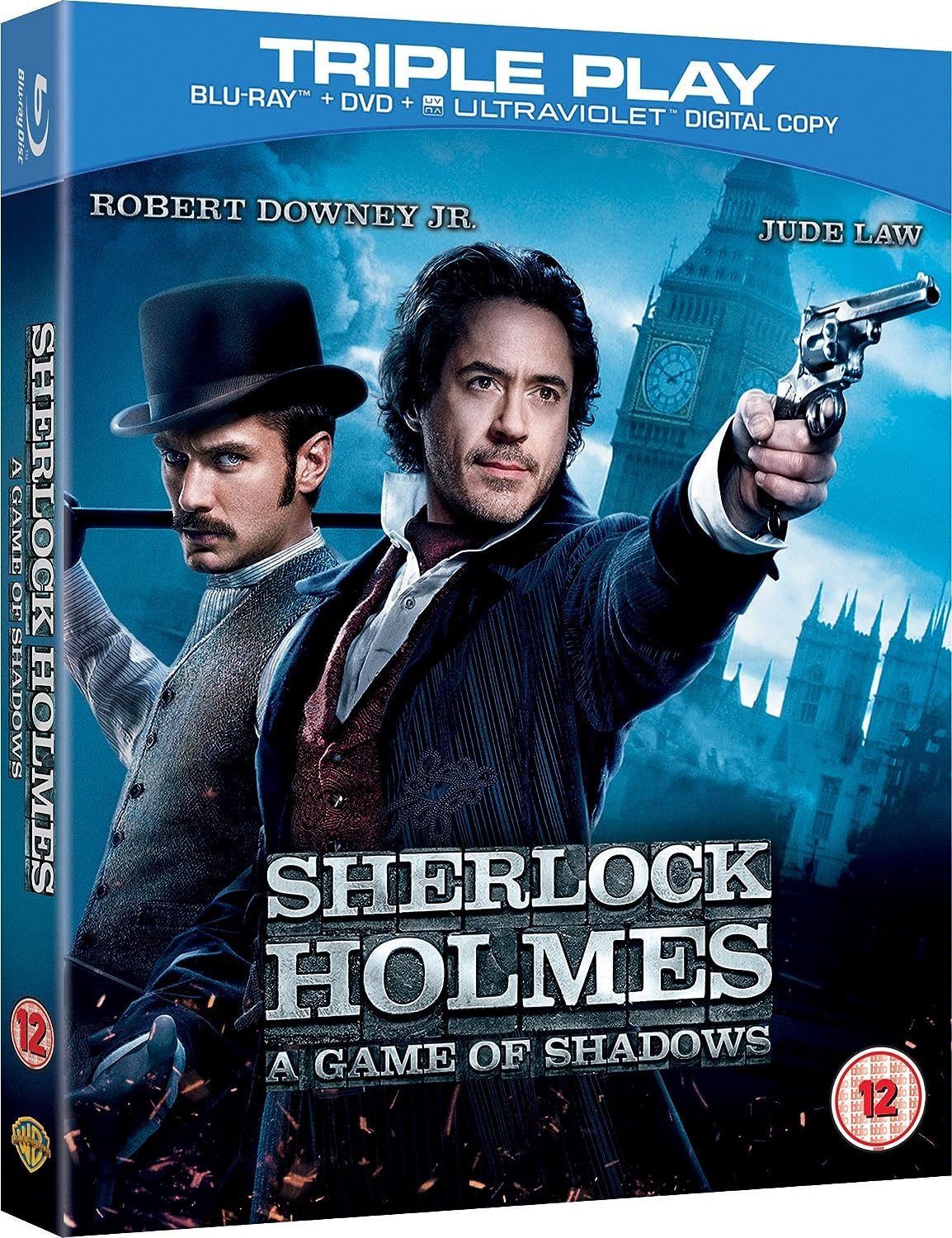 In 1891, Irene Adler delivers a package to Herr Dr. Hoffmanstahl; payment for a letter he was to deliver. Hoffmanstahl opens the package, triggering a hidden bomb that is prevented from detonating by the intervention of Sherlock Holmes. Holmes takes the letter while Adler and Hoffmanstahl escape. Holmes finds Hoffmanstahl assassinated moments later. Adler meets with Professor Moriarty to explain the events, but Moriarty poisons and kills her — deeming her position compromised by her love for Holmes. Later, Dr. Watson arrives at 221B Baker Street, where Holmes discloses that he is investigating a series of seemingly unrelated murders, terrorist attacks and business acquisitions around the globe that he has connected to Moriarty. After meeting up with his brother Mycroft at Watson’s bachelor party, Holmes meets with Gypsy fortune-teller Simza, the intended recipient of the letter he took from Adler, sent by her brother Rene. Holmes defeats an assassin sent to kill Simza, but she flees before Holmes can interrogate her. After the wedding of Watson and Mary Morstan, Holmes meets Moriarty for the first time. Voicing his respect for Holmes’ perseverance, Moriarty informs Holmes that he murdered Adler. Holmes subtly requests Watson and Mary be left alone now that Watson is no longer working with him, but Moriarty indicates he will kill them anyway. Holmes vengefully vows to defeat his.

Moriarty’s men attack Watson and Mary on a train to their honeymoon. Holmes, having followed the pair to protect them, throws Mary from the train into a river below where she is rescued by Mycroft. After defeating Moriarty’s men, Holmes and Watson travel to Paris to locate Simza. When she is found, Holmes tells Simza that she has been targeted because Rene is working for Moriarty, and may have told her about his plans. Simza takes the pair to the headquarters of an anarchist group to which she and Rene had formerly belonged. They learn that the anarchists have been forced to plant bombs for Moriarty.

The trio follows Holmes’ deduction that the bomb is in the Paris Opera. However, Holmes realizes too late that he has been tricked and that the bomb is in a nearby hotel; the bomb kills a number of assembled businessmen. Holmes discovers that the bomb was a cover for the specific assassination of Alfred Meinhard, one of the attendees, by Moriarty’s henchman, Sebastian Moran. Meinhard’s death grants Moriarty ownership of Meinhard’s arms factory in Germany. Holmes, Watson and Simza travel there, following clues in Rene’s letters. At the factory, Moriarty captures, interrogates and tortures Holmes while Watson fights Moran. Holmes spells out Moriarty’s plot, revealing that the Professor secretly acquired shares in multiple war profiteering companies using varies pseudonyms to conceal his identity, and intends to instigate a world war to make himself a fortune. Meanwhile, Watson uses the cannon he had been hiding behind to destroy the watchtower in which Moran is concealed. The structure collapses into the warehouse where Moriarty is holding Holmes captive. Watson, Simza, and an injured Holmes reunite and escape aboard a moving train. Holmes deduces that Moriarty’s final target will be a peace summit in Switzerland, creating an international incident.

At the summit, Holmes reveals that Rene is the assassin and that he is disguised as one of the ambassadors, having been given radical reconstructive surgery by Hoffmanstahl. Holmes and Moriarty, who is also in attendance, retreat upon a balcony to discuss their competing plans over a game of chess. Watson and Simza find Rene and stop his assassination attempt, but Rene is discreetly killed by Moran. Despite his war being averted, Moriarty remains confident in his victory, warning Holmes that the nations of Europe will inevitably go to war with one another regardless of Moriarty’s manipulations.

Holmes then reveals that, while being tortured by Moriarty, he replaced the doctor’s personal diary that contained all his plans and financing with a duplicate. The original was sent to Mary in London, who decrypted the code using a book that Holmes had noticed in Moriarty’s office during their first meeting, before passing the information to Inspector Lestrade, who seizes Moriarty’s assets and donates his fortune to anti-war charities. Holmes and Moriarty anticipate an impending physical altercation, and both realise that Moriarty would win due to Holmes’ injured shoulder. Out of options and with the vindictive Moriarty promising to torture and kill Watson and Mary afterwards, Holmes grabs Moriarty and throws them both over the balcony and into the Reichenbach Falls below. The pair are presumed dead.

Following Holmes’ funeral, Watson and Mary prepare to have their belated honeymoon when Watson receives a package containing a breathing device of Mycroft’s that Holmes had noticed before the summit. Contemplating that Holmes may still be alive, Watson leaves his office to find the delivery man. Holmes, having concealed himself in Watson’s office, reads Watson’s memoirs on the typewriter and adds a question mark after the words “The End”.

The climatic scene between Holmes and Moriarty is a wonderful piece of storytelling and filmmaking. Even though this movie has some flaws, I think I enjoyed it more than the first one. Sherlock Holmes: A Game of Shadows once again takes liberties with the source materials, but it is lots of fun.

In 1891, the London-based private detective Sherlock Holmes (Robert Downey, Jr.) and his partner Dr. John Watson (Jude Law) race to prevent the ritual murder of a woman by Lord Blackwood (Mark Strong), who has killed five other young women similarly. They stop the murder just before Inspector Lestrade (Eddie Marsan) and the police arrive to arrest Blackwood.

Three months later, Holmes’ eccentric behavior and cocaine addiction begins to frustrate Watson. While he enjoys their adventures together, Watson looks forward to marrying Mary Morstan (Kelly Reilly) and leaving 221B Baker Street. Meanwhile, Blackwood has been sentenced to death and requests to see Holmes, where he warns of three more unstoppable deaths that will cause great changes to the world. Blackwood is subsequently hanged and pronounced dead by Watson. Three days later, Holmes is visited by Irene Adler (Rachel McAdams), a professional thief and his former adversary, who asks him to find a missing man named Luke Reordan. After her departure, Holmes follows her as she meets with her secret employer, hidden in the shadows of a carriage. The concealed man states that Reordan is the key to Blackwood’s plans. Holmes only learns that the man is a professor and that he intimidates Adler.

Blackwood’s tomb is destroyed from the inside out, Reordan is found dead inside the coffin, and sightings of a living dead Blackwood, which has left a gravedigger in shock, cause public panic. Following a series of clues from the body, Holmes and Watson find Reordan’s home and discover experiments attempting to merge science with magic. After they survive a battle with Blackwood’s men, led by the intimidatingly tall thug Dredger (Robert Maillet), Holmes is taken to the Temple of the Four Orders, a secret magical fraternity with considerable political influence. The leaders – Lord Chief Justice Sir Thomas Rotheram (James Fox), U.S. Ambassador Standish (William Hope), and Home Secretary Lord Coward (Hans Matheson) – ask Holmes to stop Blackwood, a former member of the society and, as Holmes deduces from physical similarities, Sir Thomas’s son. Sir Thomas and Ambassador Standish are later killed through apparently supernatural means by Blackwood, allowing him and Coward, who has been in league with Blackwood all along, to control the Order. They plan to overthrow the British government, then conquer the United States and the world. Blackwood lures Holmes to a slaughter house where he finds Adler, chained to a hook, gagged, and heading towards a bandsaw, which he saves her from just in time. However, Watson is injured in a series of explosions set up by Blackwood. Lord Coward issues an arrest warrant for Holmes.

Holmes goes into hiding and studies Blackwood’s rituals, concluding that the next target is Parliament. Holmes tricks Coward into revealing that the plan is to kill its members. He, Adler and Watson discover a machine below the Palace of Westminster, based on Reordan’s experiments, designed to release cyanide gas into the Parliament chambers, killing everyone but Blackwood and his supporters, to whom Blackwood had slipped the antidote. Blackwood walks into Parliament and announces that soon all but his supporters will die. As Holmes and Watson fight Dredger and Blackwood’s men, Adler removes the cyanide containers from the machine and flees, closely pursued by Holmes. Blackwood and Coward realize their plan has failed; Coward is captured but Blackwood escapes. Holmes confronts Adler on top of the incomplete Tower Bridge, but is interrupted by Blackwood. As Holmes and Blackwood brawl, Holmes unmasks Blackwood’s supposed “magic” as nothing more than mere conjuring tricks, before tricking him into becoming entangled in the ropes and chains hanging over the Thames. After a climactic brawl, Blackwood, with a noose of chains around his neck, falls from the bridge and is hanged, this time properly.

Adler explains that her employer is Professor Moriarty, warning that Moriarty is as intelligent as Holmes but far more duplicitous. As Watson moves out of 221B, the police report to him and Holmes that a dead officer was found near Blackwood’s device. Moriarty used the confrontations with Adler and Blackwood as a diversion while he took a key component, based on the new science of radio, from the machine. Holmes looks forward to the new case and new adversary.