After getting a restraining order from Randal Graves (Clerks) for selling drugs outside the Quick Stop, Jay and Silent Bob find out from Brodie Bruce (Mallrats) that Bluntman and Chronic, the comic book based on their likenesses, has been adapted into a film in production by Miramax Films. In response, the two see Holden McNeil (Chasing Amy), the co-writer of Bluntman and Chronic for the royalties of the film. However, Holden tells Jay and Silent Bob that he sold his part of the creative and publishing rights of the comic over to his former friend Banky Edwards. Upon learning of the film, as well as the negative reaction it has received so far on the Internet, the two set out on a quest to Hollywood, to prevent the film from being made and tainting their image, or at the very least receive the money from the royalties owed to them.

On the way, they befriend an animal liberation group, consisting of four women: Justice, Sissy, Missy, and Chrissy; and one man, Brent, who they had picked up for the cause. It is revealed that the organization is a front; Brent is a patsy, intended as a diversion by freeing an animal from a testing laboratory while the girls rob a diamond depository nearby. Jay tricks Brent and throws him out of the van in order to get closer to Justice, with whom he is smitten. Justice, who becomes close to Jay and Silent Bob (particularly the former), reluctantly accepts the two as the new patsies. While the girls are robbing the diamond depository they accidentally set off the alarm, prompting them to break the glass and steal the diamonds. While this is going on Jay and Silent Bob free the animals and take an orangutan named Suzanne with them. They escape outside to see the police arriving and the van exploding, which they believe has killed the girls.Jay then takes the orangutan with him as a memorial to Justice. Quickly afterwards, Federal Wildlife Marshal Willenholly (whose name is taken from the three characters in the TV show Land of the Lost: Marshal, Will and Holly) shows up at the scene. Blinded to the diamond heist, he claims to have jurisdiction because of the large number of animals that escaped. He learns that all the animals have been recovered except for the orangutan. The officers then find and watch footage of a video Sissy recorded of Jay making remarks about “the clit”, claiming to be “the Clit commander.” The literature accompanying the tape says that “Clit” is an acronym for Coalition for the Liberation of Itinerant Tree-Dwellers. Willenholly blindly finds this as an act of terrorism and calls for police support to hunt down what he considered “the two most dangerous men on the planet.”

When the officers later have the trio cornered inside a diner and threaten to open fire, Jay and Silent Bob dress the orangutan as a child and walk out, claiming that they want to get their “son” out of the danger zone. Willenholly, thinking about the political repercussions of arresting a gay couple, decides to let them leave, but he quickly realizes his mistake and resumes the chase. When they jump into a sewer system, only Willenholly himself follows them while the other police officers, led by the Sheriff, leave him, and he is soon tricked into jumping off of a dam. Having escaped the law, Jay and Silent Bob once again return to their quest to reach Hollywood, only to have Suzanne taken by a Hollywood animal acting agency car. Now on a quest to get their ape back and to clear their names, the two once again embark to Hollywood. 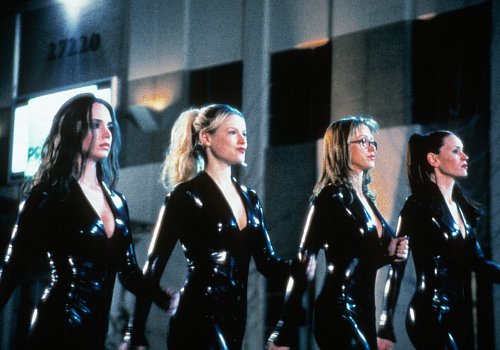 On their arrival in Hollywood, the two find themselves in the background of an E! News newscast (ironically about their threat against Miramax on the Internet) that Justice is watching. While Justice takes the diamonds and goes to Hollywood to set things right, Marshal Willenholly learns of their mission to reach Hollywood and leaves to find them. After a long chase with studio security and reclaiming Suzanne from a fictional Scream 4 in production, Jay and Silent Bob end up in Jason Biggs and James Van Der Beek’s dressing room, where they quickly realize that these are the actors that will play the roles of Bluntman and Chronic. Suzanne beats both of them up effortlessly and Jay and Silent Bob assume the roles of their characters. Production staff throw them on stage with racist director Chaka Luther King, and they must engage in a duel with Mark Hamill playing a comic book supervillain called Cocknocker.

Eventually Willenholly arrives to capture Jay and Silent Bob, but Justice arrives to save them. Justice admits that the CLIT organization was not real and that the two were used as a diversion while she, Missy, Sissy and Chrissy, were stealing jewels. As the rest of jewel thieves arrive, a climactic final battle ensues, after which Jay and Silent Bob get their royalties to the film from Banky, and Justice turns herself and her former team in to Willenholly in exchange for a shorter sentence and letting Jay and Silent Bob go.  The film ends with Jay and Silent Bob spending their royalty to locate everyone who expressed negative opinions on the internet about the movie and characters, ranging from kids to clergy, and traveling to their towns to beat them up. The scene then cuts to everyone leaving a movie theater, having just watched the Bluntman and Chronic movie and expressing negative reception: Hooper X calls the film a “one 90-minute-long gay joke.” Jay and Silent Bob, with Justice and Willenholly, then go across the street to enjoy a performance from Morris Day and The Time. After the credits, God closes the View Askewniverse book.

I love Jay and Silent Bob,Kevin Smith is an amazing director/writer and since arriving on the scene with Clerks the adventures on the king of stoners Jay and Bob have got better and better. This film is just laugh out loud gags from start to finish with so many massive stars putting in cameos including Chris Rock who is brilliant in his small role in the film It also features Will Ferrell as a wildlife marshall with half a brain. A must have for Kevin Smith fans and comedy fans alike

The day prior to the events of Clerks, college student T.S. Quint (Jeremy London) is preparing for a trip to Universal Studios in Florida with Brandi Svenning (Claire Forlani), during which he plans to propose to her; however, Brandi tells him she cannot go because she has volunteered to fill in as a contestant on Truth or Date, her father’s dating game show. They argue over this and eventually break up. T.S. turns to his best friend Brodie Bruce (Jason Lee), who has also broken up with his girlfriend, Rene Mosier (Shannen Doherty), after having an argument, and Brodie suggests the two might find comfort at the local mall.

Brodie and T.S. discover Truth or Date is being filmed at the same mall, through their friend Willam (Ethan Suplee, who throughout the movie tries to see a sailboat in a Magic Eye poster), and ask local drug dealers Jay and Silent Bob (Jason Mewes and Kevin Smith, respectively) to destroy the show’s stage, a task for which they devise elaborate but ultimately unsuccessful plans. These actions result in the two being pursued by mall security guard LaFours (Sven-Ole Thorsen), but they are able to escape him. Brodie finds out Rene began a relationship with his enemy Shannon Hamilton (Ben Affleck), a clothing store manager who hates Brodie because of his “lack of a shopping agenda.” Brodie confronts Rene to find out more about her relationship with Shannon, and the two have sex in an elevator. Brodie is later abducted and attacked by Shannon, who intends to have sex with Rene in a “very uncomfortable place”, a reference to anal sex. (As a running joke, this is interpreted as the “back of a Volkswagen”.) As a result of this incident, Jay and Silent Bob assault the mall’s Easter Bunny, under the incorrect assumption that he attacked Brodie. 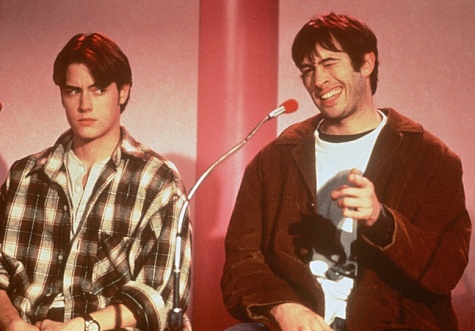 Brandi’s father, Jared (Michael Rooker), who is aware of Brodie and T.S’s presence at the mall, has the two arrested on false charges of drug possession. Jay and Silent Bob are able to rescue Brodie and T.S. and are once again able to evade LaFours. Meanwhile, Brodie and T.S. seek refuge at a local flea market, where they meet fortune teller Ivannah (Priscilla Barnes). T.S. decides to win Brandi back and the two return to the mall. 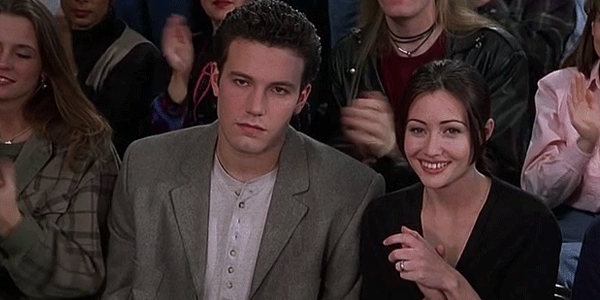 Before the show begins, Brodie receives advice on romance from Stan Lee, who was visiting the mall. After this, Brodie requests that his friend Tricia Jones retrieve footage of her having sex with Shannon. Tricia herself was doing a project in which she had sex with a number of male adults, despite being only 15 years old, for a book about the sex drive of men. Meanwhile, T.S. also persuades Jay to get two of the game show contestants stoned, which allow him and Brodie to replace them on Truth or Date. The initial plan was all three contestants but the third one, Gil Hicks, showed up late, and Brodie and T.S. must go on with him.

During the show (which Brodie continuously heckles by telling bizarre stories), Brandi recognizes the voices of Brodie and T.S., and an on-air argument between the three ensues. Brodie tells Brandi that T.S. had spent all day trying to win her back. T.S. then proposes to Brandi, which she accepts. As the police arrive to arrest T.S. and Brodie after the show is over, Silent Bob plays a sex tape of Shannon and Tricia, resulting in his arrest for statutory rape. Brodie and Rene renew their relationship as a result.

The conclusion reveals that T.S. marries Brandi, Tricia’s book is a bestseller, Shannon is imprisoned, Willam eventually does see the sailboat, and Brodie becomes the host of The Tonight Show (with Rene as his bandleader) after impressing the show’s producers with his stage banter. Jay and Silent Bob are also shown with a monkey named Suzanne, which promises to be “another story” (told in Jay and Silent Bob Strike Back).

This film is excellent, and it’s easy to see why Kevin Smith and his Jay and Silent Bob characters are such cult figures. Very funny from start to finish.