The film begins in Hollywood, Los Angeles, when two friends, Jenny Tate and Becky Morton, are at a pier and decide to get their fortune told by Zela, asking about a boy. Zela foretells that they will suffer a horrible fate, but they don’t believe her and walk away laughing. A little while later, Becky realizes Jenny has disappeared and can’t find her on the pier. On that same night, teenager Jimmy Myers is picked up on (thematically appropriate) Mulholland Drive by his sister Ellie, who has just returned from visiting her boyfriend, Jake Taylor. Jimmy had a run-in with some bullies and his crush, Brooke. Driving home, Jimmy and Ellie collide with an animal and another car. They attempt to rescue the other driver, Becky Morton, but she is suddenly dragged and ripped in half by an unseen creature. Jimmy and Ellie are both slashed by the creature’s claws, but make it out alive. When interviewed by police, despite Jimmy’s belief that it was a wolf or dog-type animal, the official report credits it to a bear or cougar.

Once they get home, Jimmy does research about wolves in California and starts to believe that the creature was a werewolf, which, the next morning, he nonchalantly tells Ellie, much to her disbelief. Jimmy and Ellie start to exhibit strange tendencies. While working at the television station, Ellie is attracted to the smell of blood on a co-anchor, but Ellie denies it, apparently proving her point by touching a silver picture frame and not getting burned. Jimmy becomes much stronger and more aggressive, as shown when a bully named Bo coerces him to join the wrestling team. He easily defeats three wrestlers, including Bo, and calls Bo out for constantly making gay jokes towards him, saying that Bo himself is repressing his own homosexuality. 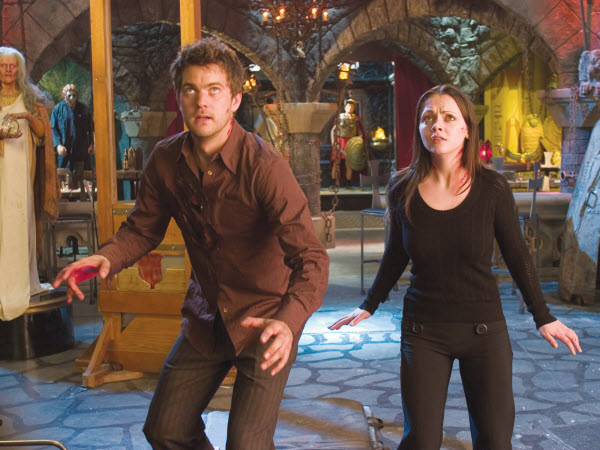 Meanwhile, at a party, Jenny runs into Jake amd Joanie, Scott Baio’s publicist, who pays attention to Jake. Jenny leaves the party after an awkward encounter, and Jake and Joanie leave as the full moon rises. Jenny is torn apart in a parking garage by a werewolf. Zela’s prediction for Jenny and Becky thus comes true. Ellie starts to believe the werewolf hypothesis when she sees Zela at the news station and she warns about the coming full moon. Jimmy proves it when he holds a silver cake server and gets burned (he then discovers that the picture frame Ellie touched was actually stainless steel). Their dog, Zipper, bites Jimmy, tasting his blood, becomes a lycanthropoid monster, and goes on a rampage. Realizing what’s happening, Jimmy goes to warn Ellie with the help of Bo, who shows up at their house to confess that he is gay and has feelings for Jimmy, which Jimmy attributes to the curse. Bo and Jimmy race to where Ellie is.

In the meantime, she figures out that Jake is a werewolf. He confirms it, but claims it wasn’t he who attacked her and Jimmy. Another werewolf attacks, seemingly proving his story. Bo and Jimmy try to help, but Bo is knocked out. The new werewolf is revealed to be Joanie, who had a one-night stand with Jake and became a werewolf (a pentagram on her right hand establishes this truth, in the lore of the world of Cursed). She wants revenge by killing all of the other girls he dates. He refuses to let Joanie hurt Ellie, so she knocks him out. Joanie soon turns into a werewolf and starts attacking. Ellie and Jimmy fight her, and she runs and hides when the police arrive. The two draw her out by insulting her, which she (in werewolf form) responds to by giving them the finger. The police open fire, apparently killing her. What they don’t know is that the only way to kill a werewolf is to separate the brain from the heart. As she rises again, a cop shoots her in the head, finally killing her. Bo is okay, but Jake has disappeared.

Jimmy and Ellie return to a wrecked home. As Jimmy goes to try to restore the power, Jake arrives. He reveals that he did in fact bite Ellie and Jimmy, and he wants Ellie to live forever by his side after he kills Jimmy. She refuses, and the two fight it out, but her werewolf side only emerges and disappears at small intervals, while he has complete control over his werewolf side and dominates the fight. Jimmy joins in, climbing across the ceiling and biting Jake, distracting him long enough for Ellie to stab him with the silver cake server, which badly injures him. Ellie decapitates Jake with a shovel and breaks the curse on her,Jimmy and their dog. They watch as Jake’s body bursts into flames, eventually leaving only the silver cake server. Brooke brings home their dog, Zipper, having learned where they live from Bo, who also shows up. Bo and Jimmy are now friends; Jimmy kisses Brooke and walks her home along with Bo. Ellie is stuck with the clean-up of the messy house.

This is a fantastic film for any Wes Craven fans out there or just horror fans.