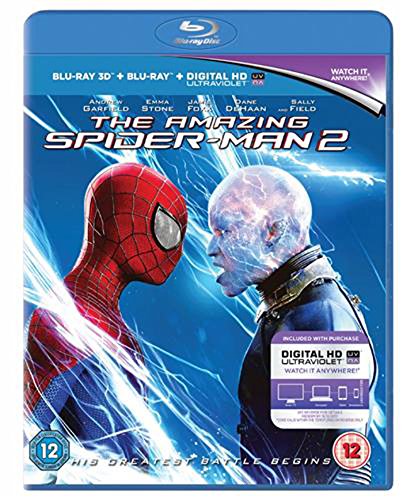 In 2000, Oscorp scientist Richard Parker records a video message to explain his disappearance. Later, he and his wife, Mary, are aboard a private jet hijacked by a man sent to assassinate Richard. The plane crashes, killing both Richard and Mary, after he uploads the video.Fourteen years later, Richard’s son Peter continues to fight crime as Spider-Man. He pursues and apprehends Aleksei Sytsevich. Later, Peter meets with Gwen at their high school graduation ceremony and, insisting he keep his vow to her father, ends their relationship. Peter’s childhood friend, Harry Osborn, returns to Manhattan to see his terminally-ill father, Norman, CEO of OsCorp. Norman explains his illness is genetic, and Harry is at the age where it first develops. Norman gives Harry a small device he claims contains his life’s work. The next day, Norman dies and Harry is appointed the new OsCorp CEO.While working in an OsCorp laboratory, electrical engineer Max Dillon shocks himself by accident and falls into a tank of genetically-engineered electric eels. They attack him, and he mutates into a living electric generator. Meanwhile, Peter attempts to maintain a friendship with Gwen, but she reveals that she may move to England for schooling. Before they can discuss it, Dillon wanders into Times Square, accidentally causing a blackout, and is stopped by Peter after a battle. Dillon is taken to Ravencroft Institute, where he is studied by German scientist Dr. Kafka. Meanwhile, the first symptoms of Harry’s illness are showing, and he uses the device Norman gave him to deduce that Spider-Man’s blood could help save him. He asks Peter, who has been selling photos of Spider-Man to the Daily Bugle, to aid him in finding Spider-Man. Peter refuses, unsure of what effects the transfusion would have. Although he later comes to Harry as Spider-Man, he still refuses, and Harry develops an intense hatred towards Spider-Man. The OsCorp board-members, in particular the vice-president, Donald Menken, frame Harry for covering up Dillon’s accident, remove him as CEO, overthrow him and take control of Oscorp. Harry’s assistant, Felicia Hardy, informs him of equipment that could help him, so he makes a deal with Dillon, who now calls himself “Electro,” to get him back inside the OsCorp building. There he finds a suit of armour and other equipment made by Norman, as well as venom from the now-destroyed genetically-altered spiders. The venom accelerates Harry’s illness and transforms him into a goblin-like creature, but the suit’s built-in emergency protocol restores his health and cures his disease.Peter uses information left by his father to locate the video message in an abandoned subway station’s hidden lab. Richard explains he had to leave because he refused to cooperate with Norman’s biogenetic weaponization plans. Peter then hears a voicemail from Gwen, telling him she was offered the British scholarship and is heading to the airport earlier than expected. He manages to catch her and professes his love for her, and, vowing to go wherever she goes, they agree to go to England together. Electro causes another blackout, and Peter heads off to fight him as Spider-Man. Gwen follows, and together they restore power and overload Electro’s body, killing him.The transformed Harry, who now calls himself “Green Goblin”, arrives equipped with Norman’s armor and weaponry. Upon seeing Gwen, he deduces Spider-Man’s secret identity and, swearing revenge for being refused the blood transfusion, kidnaps her and takes her to the top of a clock tower. Peter manages to defeat the Green Goblin, but his webbing breaks during the battle and Gwen falls to her death. Peter, depressed and distraught, mourns over Gwen’s death and ends his career as Spider-Man. Five months later, Harry is coping with the aftereffects of his transformation while incarcerated at Ravencroft. His associate, Gustav Fiers, visits Harry and the pair discuss forming their own team. Harry orders Fiers to start with Sytsevich. Later an unknown team of men break Sytsevich out of prison. Equipped with electromechanical suit armor, Sytsevich calls himself the Rhino and rampages through the streets. Peter, inspired by Gwen’s graduation speech, resumes his role as Spider-Man and confronts him.The Amazing Spider-Man 2 nearly earns an honest emotional response over this pairing. The writing could be better, but Garfield and Stone do an excellent job selling their roles and this movie. I am a big fan of Stone, and she elevates Garfield’s already solid performance. Webb does not quite find the balance between this drama and spectacle, and the film understandably includes a number of rollicking action sequences. The visual effects are strong, but the bullet-time slow motion feels a bit stale. There is a lot of flash to these bits, but not much substance. This is an entertaining film that could be better.

A young Peter Parker discovers his father Richard Parker’s study has been burgled. Peter’s parents gather hidden documents and take Peter to the home of his Aunt May and Uncle Ben, then mysteriously depart.Years later, a teenaged Peter attends Midtown Science High School, where he is bullied by Flash Thompson and has caught the eye of Gwen Stacy. At home, Peter finds his father’s papers and learns his father worked with fellow scientist Dr. Curt Connors at Oscorp. Sneaking into Oscorp, Peter enters a lab where a “biocable” is under development from genetically modified spiders, one of which bites him. He later discovers he has developed spider-like abilities, such as sharp senses, reflexes and speed.After studying Richard’s papers, Peter visits the one-armed Connors, reveals he is Richard’s son and gives Connors his father’s “decay rate algorithm”, the missing piece in Connors’ experiments on regenerating limbs. Connors is being pressed by his superior, Dr. Ratha, to devise a cure for the dying (but unseen) head of Oscorp, Norman Osborn. In school, Peter gets into trouble after a basketball challenge with Flash in which Peter accidentally shatters the backboard glass. His uncle changes work shifts to meet with the principal and asks Peter to walk May home for him that night. Peter forgets to do so, distracted while at Oscorp helping Connors regenerate the limb of a laboratory mouse. At home, he and Ben argue and Peter leaves. At a nearby deli, a cashier refuses to let Peter buy milk when Peter is two cents short; when a thief suddenly raids the store, Peter indifferently observes. While searching for Peter, Ben attempts to stop the thief and is killed. The thief escapes as Peter finds Ben dead on the sidewalk.Afterward, Peter uses his new abilities to hunt criminals matching the killer’s description. After a fall lands him inside an abandoned gym, a luchador-wrestling poster inspires him to create a mask to hide his identity. He adds a spandex suit and builds mechanical devices to attach to his wrists to shoot a biocable “web”. Later, at dinner with Gwen’s family, he has a tense conversation with her father, police captain George Stacy, over the new masked vigilante’s motives. After dinner, Peter reveals his identity to Gwen and they kiss.After seeing success with the mouse using lizard DNA, Ratha demands Connors begin human trials immediately. Connors refuses to rush the drug-testing procedure and put innocent people at risk. Ratha fires Connors and decides to test Connors’ serum at a Veterans Administration hospital under the guise of a flu shot. In an act of desperation, Connors tries the formula on himself. After passing out, he awakens to find his missing arm has regenerated. Discovering that Ratha is on his way to the VA hospital, Connors, whose skin is turning green and scaly, goes to intercept him. By the time he gets to the Williamsburg Bridge, Connors has become a violent hybrid of lizard and man, tossing cars, including Ratha’s, over the side. Peter, now calling himself Spider-Man, snatches each falling car with his web-lines.Spider-Man suspects Connors is the Lizard and unsuccessfully confronts the creature in the sewers. The Lizard learns Spider-Man’s real identity via the name on an abandoned camera and follows Peter to school, where they fight. Police start a manhunt for both Spider-Man and the Lizard. Captain Stacy discovers that Spider-Man is really Peter. The Lizard plans to make all humans lizard-like by releasing a chemical cloud from Oscorp’s tower, to eliminate the weaknesses he believes plague humanity. Spider-Man eventually disperses an antidote cloud instead, restoring Connors and earlier victims to normal, but not before the Lizard mortally wounds Captain Stacy. Before his death, Captain Stacy requests Peter avoid Gwen, in order to keep her safe. Peter initially does so, but later at school suggests to Gwen he may see her after all. In a mid-credits scene, Connors, in a prison cell, speaks with a man in the shadows who asks if Peter knows the truth about his father. Connors replies, “No”, and demands Peter to be left alone before the man disappears.I began watching The Amazing Spider-Man with muted expectations, and without anticipation. I walked out of my experience feeling as though the film was actually good not amazing.I think this franchise was too soon for a reboot. 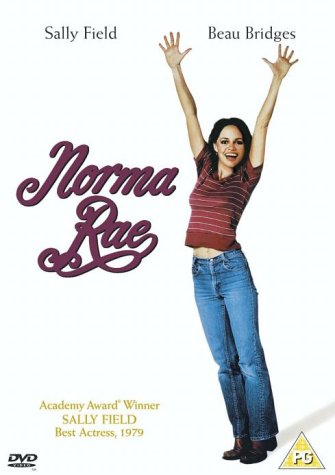 Norma Rae Webster is a minimum-wage worker in a cotton mill that has taken too much of a toll on the health of her family for her to ignore their poor working conditions. After hearing a speech by a New York union organizer, Reuben Warshowsky, Norma Rae decides to join the effort to unionize her shop. This causes conflict at home when Norma Rae’s husband, Sonny, says she’s not spending enough time in the home.

Despite being pressured by management, when confronted, Norma Rae takes a piece of cardboard, writes the word “UNION” on it, stands on her work table, and slowly turns to show the sign around the room. One by one, the other workers stop their mill machines, and eventually, the entire room becomes silent. After all the machines have been switched off, Norma Rae is taken to jail but is freed by Reuben.

She then decides to talk to her children and tell them the story of her life. After discussing it with Reuben, Sonny tells Norma there’s no other woman in his mind and he will always remain with her. Norma Rae then successfully orchestrates an election to unionize the factory, resulting in a victory for the union. Finally, Reuben says goodbye to Norma; despite his being smitten with her throughout the movie, they only shake hands because he knows she is married and loves her husband, and Reuben heads back to New York.

This film is very much in the vein of Erin Brockovich(2000)where the worker has to stand his ground and fight for his/her voice to be heard by the oppressive corporate big boys.Sally Field’s Oscar winning performance as Norma Rae Webster was ranked No 15 on the American Film Institute’s Heroes list in their compilation of 100 years of The Greatest Screen Heroes and Villains.It’s good to see a great film with a powerful female lead character.