The film opens with Zawame City ravaged by a fight between the Heisei Riders and the Shōwa Riders, before going back in time to the week before, when workers from the Yggdrasill Corporation are dragged by an unknown force underground. Upon hearing rumors about it, Kouta Kazuraba investigates the area with his friend Mai Takatsukasa, just to fall into a hole as well and find themselves in an underground, alternate version of the city. The two find a boy called Shu, who has the power to revert things and is certain that he has something important to do, but he does not remember what it is. 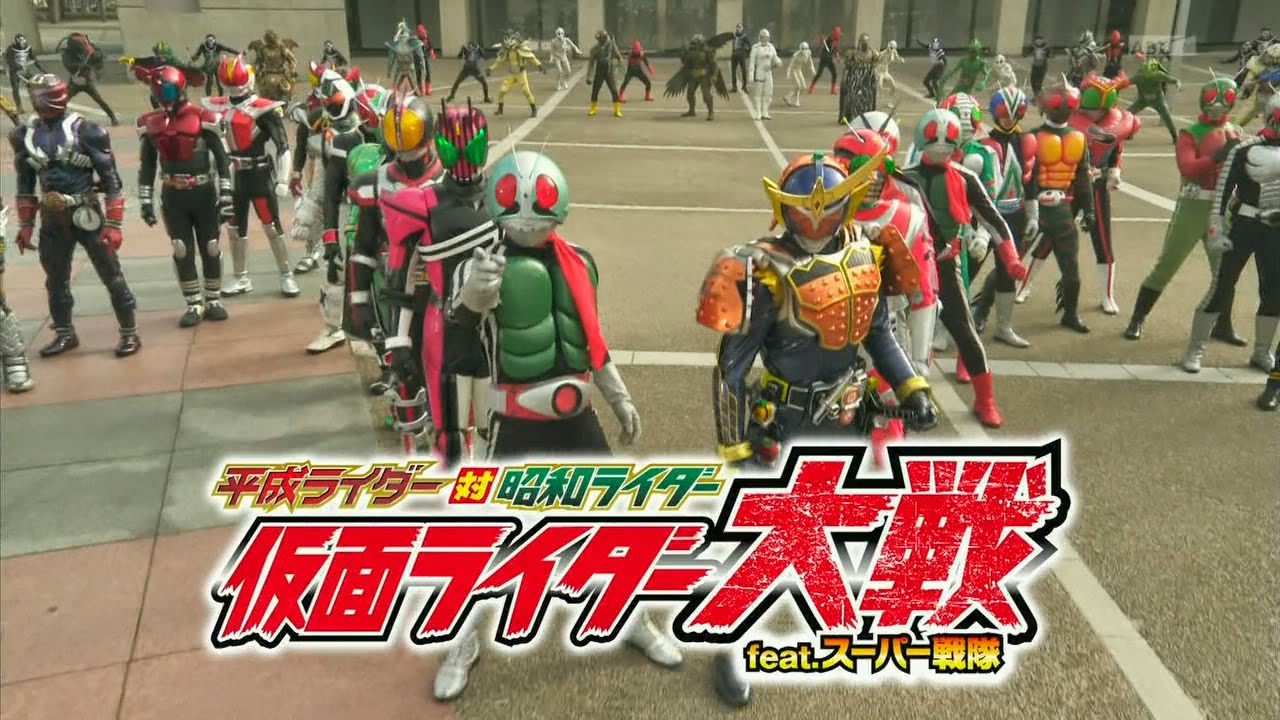 Kouta and Mai then bring the boy to the surface and Takeshi Hongo appears demanding them to hand him over. When soldiers from the Underground Badan Empire appear to kidnap him as well, Takeshi transforms into Kamen Rider 1 to allow Kouta, Mai, and Shu to escape. Badan then launches an attack on the surface, and Armored Riders Baron, Ryugen, and Zangetsu Shin appear to fight back alongside Kouta, who transforms into Armored Rider Gaim as well to protect his friends. However, Gaim is attacked by Kamen Rider Fifteen, who is also seeking the boy and also possesses a Lockseed that allows him to transform into the Rider Arms of the 15 Heisei Riders, and when Kamen Riders 1, 2, and V3 appear to fight him, Shu uses his powers to escape with Gaim and Mai.

Kouta and Mai take Shu to Drupers where they meet Tsukasa Kadoya, and Narutaki appears before them as well, affirming that the fifteen Heisei Riders must join forces to stop the Badan Empire, and before leaving, warns them that asking for the Shōwa Riders help is useless as they will refuse to cooperate with them. Tsukasa then departs to gather the other Kamen Riders with Kaito Kumon, while Kouta stays behind to take care of Shu. The first Rider they contact is Shotaro Hidari, who refuses to hear their plea before he finishes his job to search for some lost pets. Leaving Kaito behind to help Shotaro with his errand, Tsukasa contacts Takumi Inui who also refuses to help, claiming that his days as a Kamen Rider are over. Kamen Rider Fifteen appears to attack them, and Tsukasa transforms into Kamen Rider Decade to fight him, allowing Takumi and himself to escape harm.

Some time later in a ramen shop, Takumi involves himself in an incident where a wounded runaway criminal holds Mari, a high school girl, hostage. Keisuke Jin appears and heals his wounds before convincing him to release Mari and surrender to the police. Takumi then follows Jin to his clinic, where he helps him tend to another patient. Takumi then confides in Jin about how he is haunted by the death of his friend Masato Kusaka and Jin convinces him to stay at his clinic for a while. 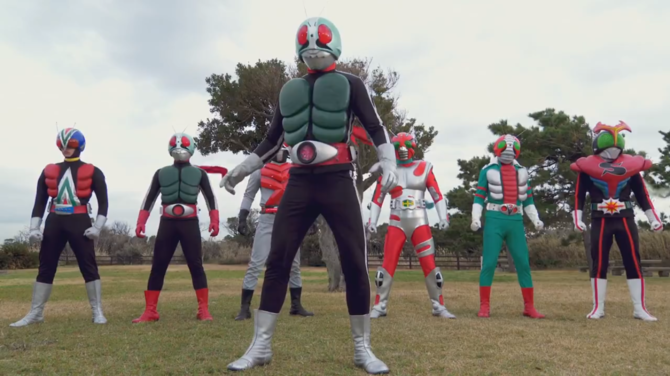 The next day, Takumi and Mari are attacked by the Badan Empire. In order to protect her, Takumi decides to fight again as Kamen Rider Faiz, defeating them, but in turn, Jin reveals himself as Kamen Rider X, attacking and defeating Faiz before claiming that he must find his resolve by himself. Meanwhile, Tsukasa finally convinces Shotaro to listen to his request, and asks him about Shu. Elsewhere, Shu finally remembers his past and leads Kouta to his house, where it is revealed that Shu has been dead the whole time. He remembers that before he died, his mother had been due to take him to see the lighthouse but was forced to cancel the plans when she had to work. Upset, Shu sent a picture of himself holding a piece of paper reading ‘I Hate You’ before then being killed crossing the road. Although he intended it just as a tease, Shu now regrets his final actions and wishes to see his mother and make amends with her. Kamen Rider Fifteen then appears to take Shu with him, and Kouta learns that he is actually Shu’s father Ren Aoi. Aoi reveals that the Badan Empire intends to use Shu’s powers to power up a machine known as the Mega Reverse, which can make the dead return to life while killing the living, allowing his son to come back to life. While Kamen Rider Gaim fights Kamen Rider Fifteen, Kamen Rider Decade appears and takes Shu to see his mother, but General Jark stands in his way. 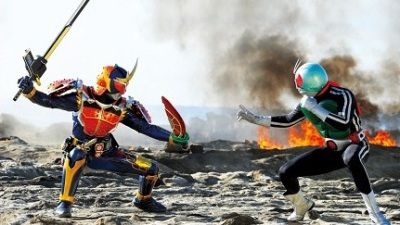 Back in the present day, as the Shōwa and Heisei Riders fight and defeat each other, General Schwarzvn from the Shadow Line appears to join forces with the Badan Empire. Schwarz reasons that Badan’s plans to open the underworld and unleash darkness is compatible with their own desire to eliminate light and expand the Shadow Line’s domains, and sends his Kuliners to attack Kamen Rider Den-O’s Den Liner which is destroyed along with Den-O. Kouta, Tsukasa, and Takumi join forces with the remaining Heisei Riders and confront the Shōwa Riders about their reasons for attacking them. Kamen Rider 1 explains that it was all the Heisei Riders’ fault, as it was their attachment to their deceased important ones that empowered the Badan Empire and allowed the advent of Kamen Rider Fifteen. Meanwhile, Ambassador Darkness, the leader of the Badan forces, reveals himself as Ryo Murasame, who has infiltrated the organization to destroy it from the inside. He betrays the Generalissimo of Badan, apparently destroying the Mega Reverse Machine, but is deceived instead, when the true Mega Reverse Machine is revealed to be the entire Badan Empire base, which takes flight up in the sky. Ryo then reveals that the other Kamen Riders that have supposedly been defeated had in fact been sent to Helheim Forest, and takes the opportunity to summon them back all at once to assist him and Kamen Rider Gaim. 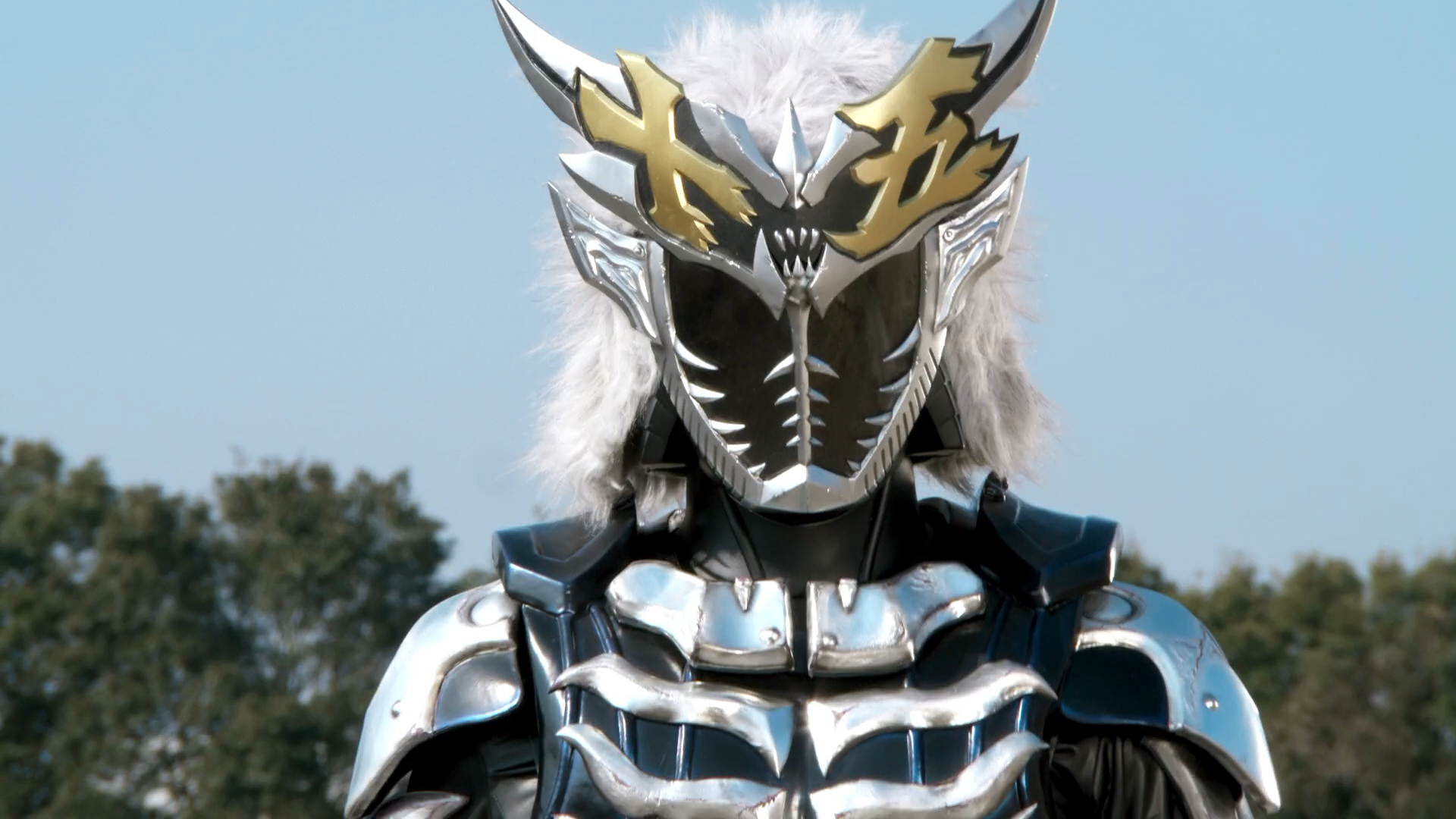 The Heisei and Shōwa Riders confront the Badan Empire helped by Armored Riders Baron, Ryugen, and Zangetsu Shin when the Generalissimo of Badan reveals itself as a giant monster resembling a dinosaur. Daigo Kiryu from the Kyoryugers appears, as well, to fight the monster with Gabutyra, but it proves itself too strong for just his Zyudenryu. Soon after, the ToQgers and Kamen Rider Den-O arrive to assist him, combining their trains with Gabutyra into ToQ-Oh Kyoryuzin feat. DenLiner to destroy the Generalissimo. As Kamen Rider Decade rescues Shu from the Mega Reverse Machine, Kamen Riders Wizard and X are about to destroy it for good, when they are stopped by Faiz, who wants to atone for Masato’s death by allowing him to be revived. Haruto argues, telling him how his desire to bring Koyomi back resulted in her resurrection into a being of evil. Jin then convince Takumi that destroying the machine is the right thing to do, and together the three Kamen Riders use their final attacks to bring it down. Kamen Rider 1 gives Kamen Rider Gaim a special Lockseed containing the powers of the 15 Shōwa Riders, allowing him to transform into 1 Arms and finally defeat Kamen Rider Fifteen, who returns to his senses. With the Badan Empire all but defeated, Kouta asks the Shōwa Riders if there is any way they can use their power to fulfill Shu’s wish. The Shōwa Riders agree, and use their energy to change Shu’s photo so that the message now reads ‘I Love You’. Shu’s spirit then reconciles with his parents one last time before passing on to the other side. The battle is not quite over however, as Takeshi tells the Heisei Riders that the anger at how their desire to resurrect the dead helped cause the crisis was not a charade. Therefore the Shōwa Riders are still in doubt if they can leave the protection of Earth to the Heisei Riders and challenge them to a battle, with Narutaki watching it all from afar. The battle concludes when Kamen Rider Gaim risks himself to protect a single flower from Kamen Rider 1’s Rider Kick, leading the Shōwa Rider to admit defeat upon realizing his act of kindness. Now truly reconciled, the Shōwa and Heisei Riders then bid farewell to each other and follow their separate ways once more.
Alternate Ending
The battle concludes when Kamen Rider Gaim powers up attack to use against Kamen Rider 1, but stops after realizing that the Shōwa Rider could attack him before he deploys it and admits defeat, allowing the Shōwa Riders to win. Kamen Rider 1 commends him upon realizing his act of kindness, leading the Shōwa and Heisei Riders to reconcile.

A great film which shows just how far Kamen Rider has come since 1971 to present. Having them all  return for this special was brilliant as it has something for everyone both young and old.