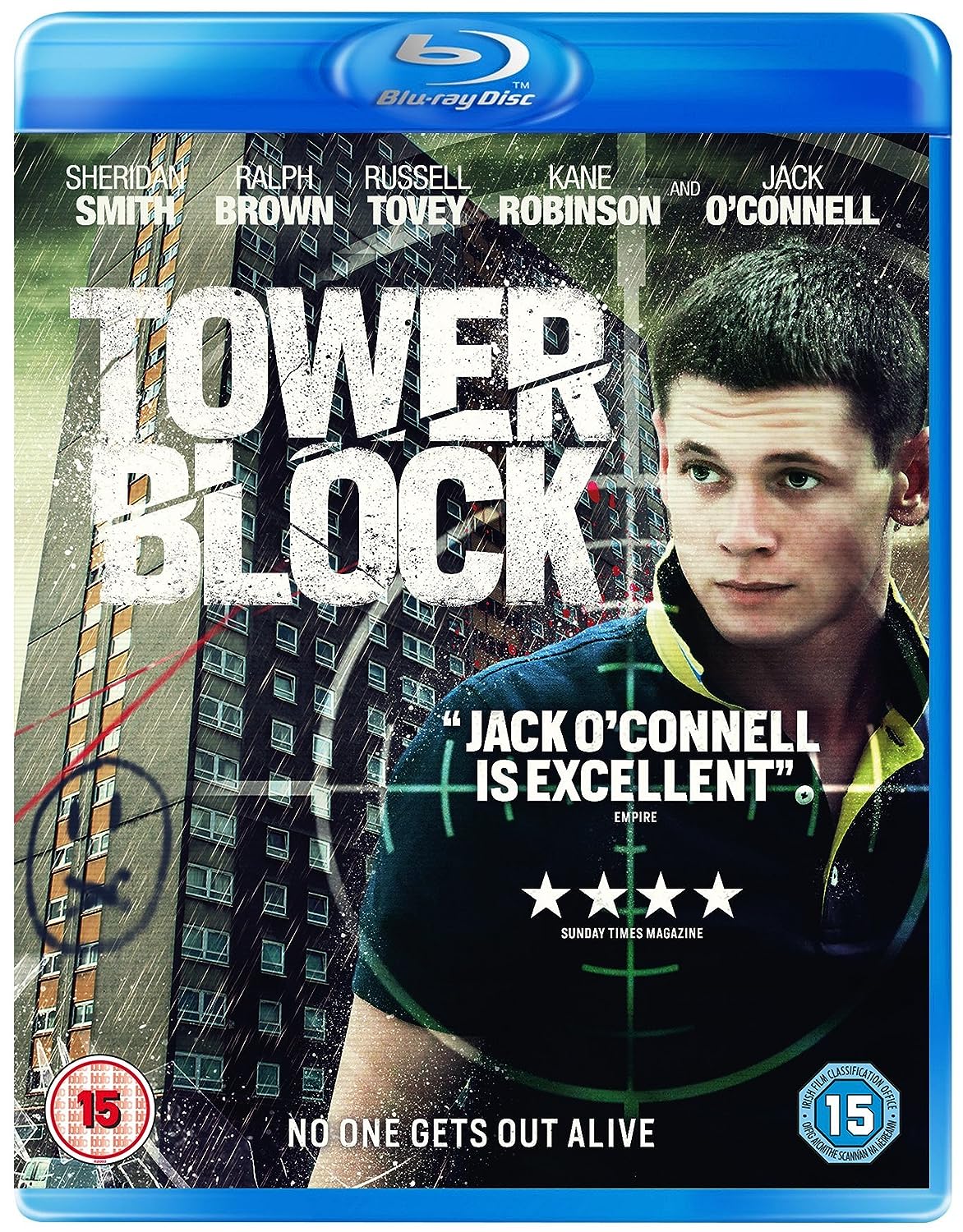 One night in London, the 15-year-old Jimmy (Ralph Laurila) runs through a housing estate begging passersby for help. Everyone ignores him. He enters the condemned Tower Block 31 and finds his way to the top floor, which is the only floor that is still inhabited as the tenants wait to be rehoused. He bangs on doors as the two masked men who have been chasing him appear. The only person who helps him is office worker Becky (Sheridan Smith), but she is beaten to the ground and he is dragged away. The next morning Detective Constable Devlin (Steven Cree) conducts door-to-door enquiries about the previous night’s murder, as the boy’s body has been found. Nobody will speak to him; not even Becky, who claims her injuries are the result of a mugging.Three months later, Becky wakes up in her flat next to her colleague Ryan (Jamie Thomas King), with whom she has had a one-night stand following an office party. As they have breakfast, Ryan is suddenly shot in the head through the window. Becky flees into the hallway, along with the other residents, as all the flats have been targeted: young couple Amy (Loui Batley) and Jeff (Michael Legge); Carol (Julie Graham) and her teenaged computer game addict son Daniel (Harry McEntire); chavvy single mother Jenny (Montserrat Lombard); middle-aged former soldier Neville (Ralph Brown) and his wife Violet (Jill Baker); small-time drug dealers Gary (Nabil Elouahabi) and Mark (Kane Robinson); lonely alcoholic Paul (Russell Tovey); and the violent petty criminal Kurtis (Jack O’Connell), who extorts protection money from his neighbours. Amy, Jeff, and Mark are wounded. As well as Ryan, Carol’s husband and Jenny’s two young children have already been killed by the sniper. Amy too soon succumbs to her injuries despite the best efforts of Violet, who is a first aider. The phones and internet have stopped working. The walls and doors are covered by homemade posters bearing three emoticons. Daniel, who has learned about such things from computer games, says that the sniper knows what he is doing and is using a high-powered military-grade rifle.The fire escape is exposed to the sniper’s gunfire, so they force open the lift door. It is boobytrapped with a shotgun, however, which kills Jeff. Becky, Kurtis, and Paul climb down the lift shaft, but discover the ground-floor exit door has been blocked with a skip and return to the top floor. Jenny suggests the emoticons symbolise the three wise monkeys and that the sniper is targeting them because they let Jimmy be killed and refused to speak to the police about it. She then walks into her flat to be shot dead alongside her children. The largest of the posters has been stuck on the door of the flat occupied by Gary and Mark. Kurtis forces them to admit that they were the two masked men who chased and beat Jimmy because he had withheld money from them after they used him as a drug courier; they claim they did not mean to kill him. Nevertheless, Kurtis forces them into the flat where the sniper kills both of them.

Believing they can now leave because Jimmy’s killers are dead, Carol runs down the fire escape, followed by Daniel. The sniper lets them reach the ground and then kills both of them. It is now obvious that he intends to execute all of them for refusing to help the police. The survivors have now been trapped for two days. They hatch a plan to tie all the building’s fire hoses together and for one of them to climb down to the ground from the roof on the far side, where the sniper cannot see. Paul volunteers to go. Violet opens the door to the roof and is killed by another shotgun boobytrap. Becky, Kurtis, and Paul climb to the roof and secure the hoses, and Paul begins to climb down. The sniper, however, shoots the top of the hose until it breaks, and Paul falls to his death. Becky and Kurtis barely manage to get back inside.

As a final act of desperation, the three survivors set fire to the top floor, hoping someone will see the fire and alert the emergency services. They then climb down the lift shaft. Kurtis falls and breaks his leg. Property developer Kevin (Christopher Fulford) and his assistant Eddie (Tony Jayawardena) arrive and spot the flames, but before they can call the fire brigade, the gunman shoots them both at close range. He then enters the building after throwing in a smoke grenade. Becky sneaks out and finds a nail gun in Kevin’s pick-up truck. Using this the three survivors manage to subdue the gunman and remove his mask, only to discover it is DC Devlin, who has cracked after endless lack of assistance in the cases he is investigating. After a struggle, Becky kills him with the nail gun and the survivors walk outside with the sound of approaching sirens.

The film managed to keep my attention the whole way through. The cast mostly gave good performances and as the film went on, characters seemed to suffer more brutal exits. All in all its a little predictable but still a good thriller film to pass the time. 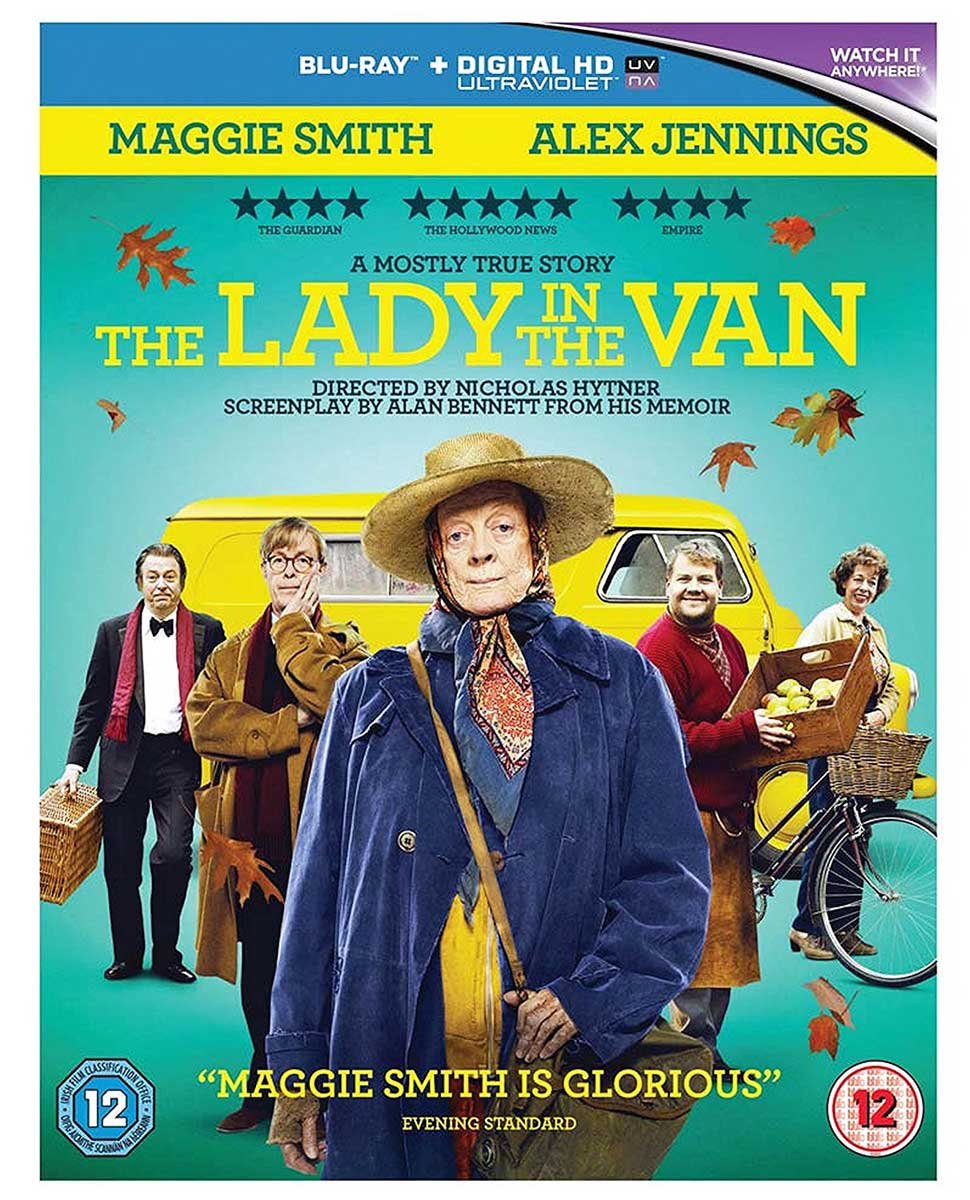 The Lady in the Van tells the true story of Alan Bennett’s strained friendship with Miss Mary Shepherd, a crabby, eccentric and insanitary homeless woman whom Bennett befriended in the 1970s before allowing her to park her Bedford van in the driveway of his Camden home “for three months”. She stayed there for 15 years. As the story develops Bennett learns that Miss Shepherd is really Margaret Fairchild, a gifted former pupil of the pianist Alfred Cortot. She had played Chopin in a promenade concert, tried to become a nun, was committed to an institution by her brother, escaped, had an accident when her van was hit by a motorcyclist for whose death she believed herself to blame, and thereafter lived in fear of arrest.Much of the dialogue is between two versions of Bennet – his “real self” and his “writer self”.During her 15-year stay in his drive, Bennett balances his writing career with watching over Shepherd and providing for his increasingly invalid mother. Though he denies “caring” for anyone, he slowly becomes aware of his growing friendship with Shepherd. After coming home early from a day centre he sent her to, she dies peacefully in her sleep in her van. Alan decides to write a memoir covering the years he’s known her. In 2014, the real Bennett is shown observing this film’s final scene being filmed: his younger selves unveiling a plaque on his home dedicated to “The Lady in the Van”.It’s not the biggest dramedy out there and not even the funniest, but The Lady in the Van is bound to please just about anyone. And like the titular character, it’s a film hard to love, but once you do, it’s equally hard to resist. 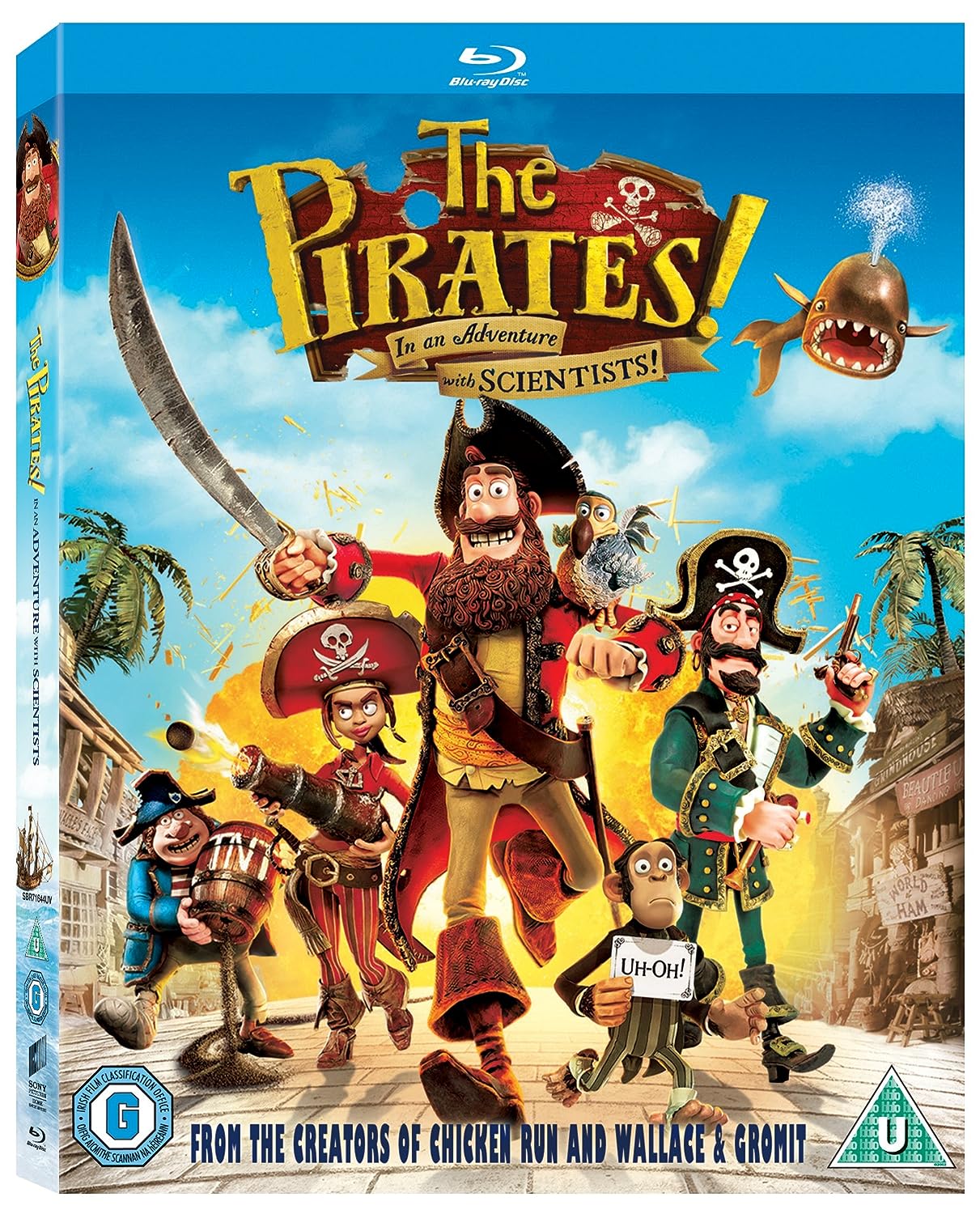 In 1837, the Pirate Captain (Hugh Grant), inexpert in the ways of pirates, leads a close-knit, rag-tag group of amateur pirates who are trying to make a name for themselves on the high seas. To prove himself and his crew, the Pirate Captain enters the Pirate of the Year competition, with the winner being whoever can plunder the most. After several failed attempts to plunder mundane ships, they come across the Beagle and capture its passenger Charles Darwin (David Tennant). Darwin recognises the crew’s pet Polly as the last living dodo, and recommends they enter it in the Scientist of the Year competition at the Royal Society of London for a valuable prize. Secretly, Darwin plans on stealing Polly himself with the help of his trained chimpanzee, Mr. Bobo, as to impress Queen Victoria (Imelda Staunton) whom he has a crush on; the Pirate with a Scarf (Martin Freeman) becomes suspicious of Darwin’s motive after one failed attempt to steal Polly.The pirates disguise themselves as scientists to enter the competition, and the dodo display wins the top prize, which turns out to be minuscule trinkets and a meeting with the Queen. The Pirate Captain hides Polly before the meeting. There, the Queen requests that the Pirate Captain donate Polly for her petting zoo. The Pirate Captain refuses and accidentally reveals his true self, but Darwin steps in to spare the Captain’s life, secretly telling the Queen that only the Captain knows where Polly is kept. The Queen lets the Pirate Captain go and orders Darwin to find Polly by any means necessary. Darwin takes the Pirate Captain to a tavern and coaxes out of him that Polly is stashed in his beard. Darwin and Mr. Bobo are able to steal the bird, leading on a chase into the Tower of London where the Queen is waiting. She dismisses Darwin, and instead offers the Pirate Captain a large sum of money in exchange for Polly, which for the Pirate Captain would be enough to assure his win as Pirate of the Year. He accepts the offer and returns to his crew, assuring them Polly is still safe in his beard, though the Pirate with a Scarf is suspicious of his newfound wealth.At the Pirate of the Year ceremony, the Pirate Captain wins the grand prize from the Pirate King (Brian Blessed), but rival pirate Black Bellamy (Jeremy Piven) makes the Queen’s pardon known to all and explains that if the Pirate Captain has been pardoned, then technically, he is no longer a pirate and, as such, can’t be Pirate of the Year. The Captain is stripped of the prize, treasure, pirate attire, and his pirating license and is banished from Blood Island by the Pirate King, and admits his loss of Polly to his crew who abandon him. The Captain returns to London, intent on rescuing Polly. He reunites with Darwin, learning that the Queen is a member of an exclusive dining society of world leaders that feast on endangered creatures, and that Polly is likely on her flagship, the QV1 to be served at the next meal. The Pirate Captain and Darwin work together to steal an airship to travel to the QV1. Mr. Bobo, meanwhile, goes to find the rest of the Captain’s crew to enlist their help. 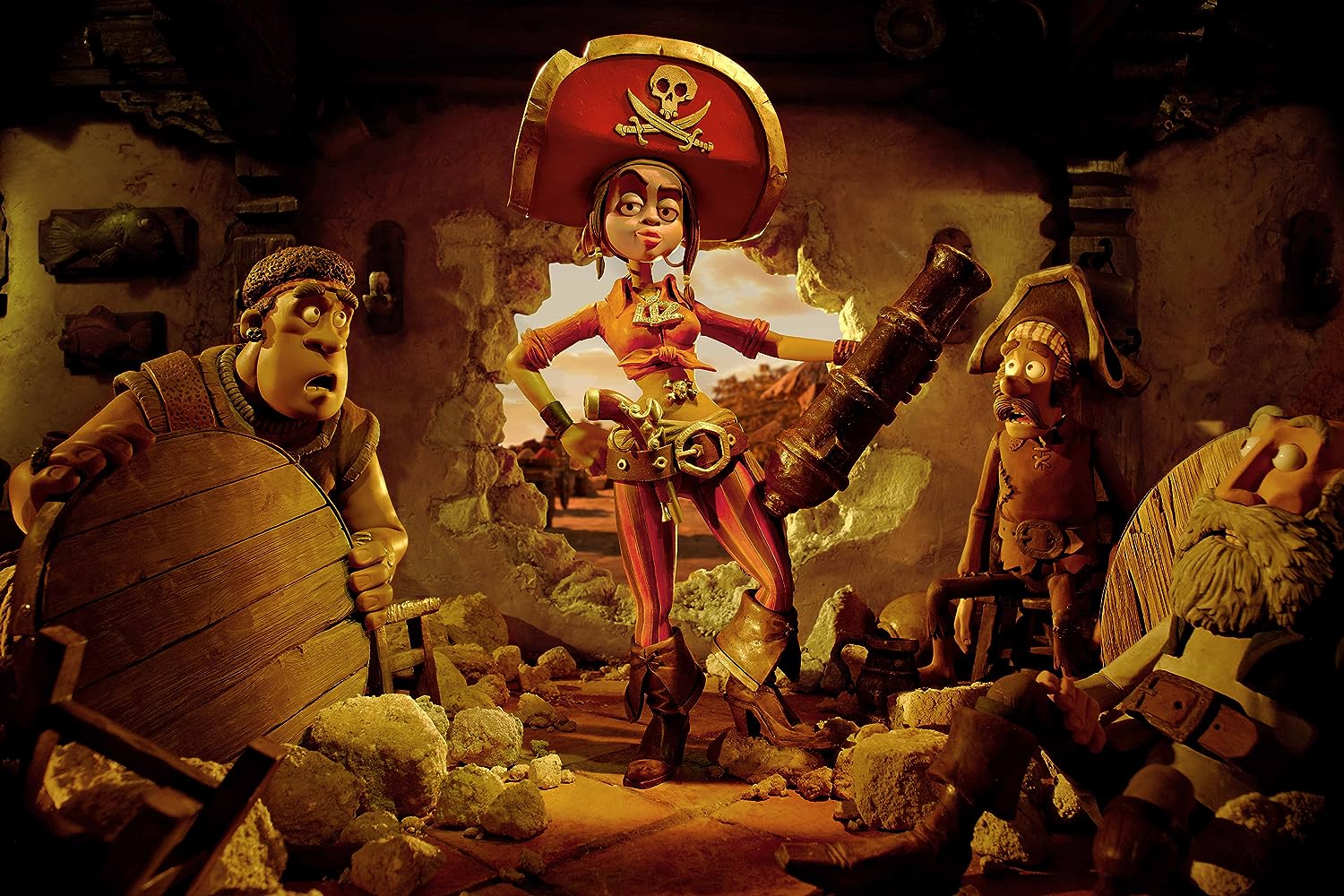 Aboard the QV1, the Queen locates the Pirate Captain and Darwin and attempts to kill both of them, but together they best her. In the battle, they accidentally mix the ship’s store of baking soda with vinegar, causing a violent reaction that rends the ship in two. The Pirate Captain rescues Polly and they escape safely, leaving behind a furious Queen. With his reputation among pirates restored because of the large bounty now on his head, the Pirate Captain is reinstated as a Pirate, and he and his crew continue to explore the high seas in search of adventure.In a few post-credits scenes, they leave Darwin on the Galapagos Islands, Mr. Bobo joins the Pirate Captain’s crew, the Queen is left at the mercy of some of the rare animals she had planned on eating, Black Bellamy is forcefully stripped of his trophy by the Pirate King because of the Pirate Captain’s new infamy, and the crew present the Pirate Captain with their own homemade Pirate of the Year trophy.The cast itself was one of the film’s main attractions and the voice work is first rate. Hugh Grant shows impeccable comic timing, and Salma Hayak voices Cutlass Liz with lots of sass. Jeremy Piven shows that he can do wonderfully with a character that is strongly-written and provides a good contrast to Grant’s Pirate Captain. Brendan Gleeson and Brian Blessed give rousing turns, David Tennant’s Charles Darwin charms and Imelda Staunton voices Queen Victoria as if she were born to do it. A wonderful family film that anybody could enjoy