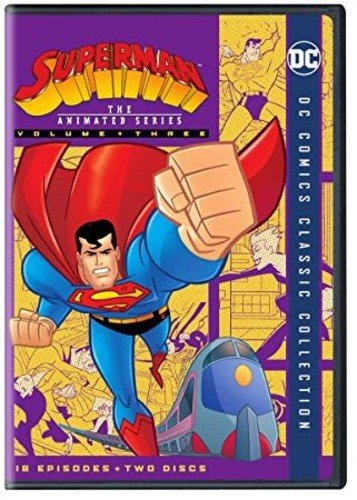 Superman is everywhere. He’s also been everywhere; for nearly seventy years now the character has been inspiring us with his tales of heroism, adventure, and fantasy. Seventy years is a long time and with a character as popular as Superman it equates to a lot of different interpretations. From the original comic books to a radio series to a handful of television shows, it seems that the Last Son of Krypton has done it all. We are very lucky then to have these DVDs, because in all of that time, throughout all the years, the stories found in Superman: The Animated Series are his best. The fifty-four cartoon episodes (spread across three boxed sets) that make up the complete run of Superman: The Animated Series aren’t just the best take on the character because they’re faithful. Nor is it because they’re animated, for all ages, or very imaginative. It’s for all of these reasons. And several more.

The creative team behind the series has plundered the rich mythology of the character and come up with a fantastic take on each and every piece of the Superman universe. For starters, their Clark Kent and Lois Lane interpretation is spot-on. Clark isn’t too much of a goof, nor is he too simple. Similarly, Lois is fiery, funny, and lovely. Seeing the characters come together at the end of Legacy, Part 2 makes for a great cathartic moment. Superman has saved Lois a countless number of times, it is only fitting then that Lois save him when he needs it. The main arc of this season borrows from the comic book universe and brings Darkseid and his homeworld to the forefront. Hinted at earlier in the show, it’s in this third volume that the Lord of Apokolips finally gets his payoff – and his payback. In a trio of two-parters, Apokolips… Now!, Little Girl Lost, and Legacy, Superman fights one of his most ruthless foes in a series of episodes that offer some excellent action, drama, and science fiction fun.

While these episodes are very faithful to the mythos, we’ve also got a great selection of original stories that go to prove that with a character like Superman, there is no limit to the stories that you can tell. One of my favorites is Knight Time. When Batman goes missing, Superman pays a visit to Gotham City and tries to find out where his friend has gone. Supes inadvertently ends up masquerading as Batman – dressing up in the Dark Knight’s costume and everything! – and teams up with Robin to solve the mystery of the missing Bruce Wayne. Not only is the episode entertaining, but it’s also got a great sense of humor. Seeing Superman do his best impersonation of Batman is wonderful – Clark doesn’t know which utility pockets contain what, and his attempts at being grim (nodding his head instead of speaking) are great.

Watching these shows you get the feeling that it was during this final stretch of episodes that the show’s producers were finding new ways of playing with the formula that they had designed, and perfected, with both Batman: The Animated Series and Superman: The Animated Series. Not only do these Superman episodes have a lot of two-parters, but we’ve also got some great guest-stars; it seems that this show is the precursor to Justice League. We’ve got heroes, Kyle Rayner from In Brightest Day, and villains, Ra’s Al Ghul in The Demon Reborn, and everyone in between – everyone’s favorite master of the sea, Aquaman in Fish Story. We also get an expansion of the Superman supporting cast when Supergirl makes a welcome appearance in the Little Girl Lost two-parter.

The animation is somewhat more limited when compared to the fancy digital effects that more modern shows exhibit, but the handcrafted style gives the show a wonderful atmosphere. If you pay close attention you’ll notice that a lot of effort has gone into the design of the animation – much more so than most animated series. The framing here is frequently packed. Helping flesh out the world are all of the voice actors; everyone from Tim Daly (as Superman/Clark) to Clancy Brown (as Lex Luthor) is perfect in his or her role. The only thing holding the show back, and this is a small point, is the fact that the stories, due to their child-friendly animated nature, are a little more limited than the best television shows tend to be. Even so, you’ll be hard pressed to find a better adventure series – animated or live action.

In one of the episodes found in this collection, Superman pays his final respects to a recently departed friend. In the graveyard, Superman comes to realize something very important: “In the end, the world didn’t really need a Super man. Just a brave one.” This show gives us a character who is both brave and super. It gives us a real hero. It gives us Superman… as good as he’s ever been.