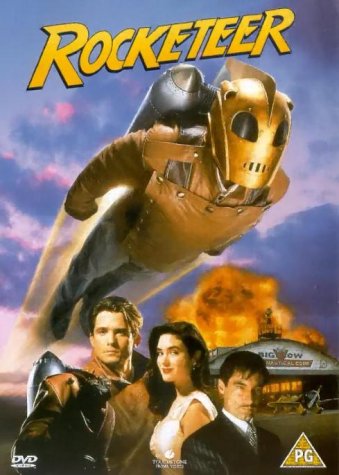 In 1938 Los Angeles two gangsters in Eddie Valentine’s (Paul Sorvino) gang steal a rocket pack from Howard Hughes (Terry O’Quinn). During their escape, they find themselves on an airfield, where they hide the rocket, ending up in an auto-airplane accident while escaping, the police in hot pursuit. Stunt pilot Cliff Secord (Billy Campbell), whose Gee Bee racer was totaled during the accident, and airplane mechanic Peevy (Alan Arkin) later find the rocket pack hidden in a bi-plane cockpit. Meanwhile, famous actor Neville Sinclair (Timothy Dalton), who hired Valentine’s gang to steal the rocket, sends his monstrous henchman Lothar (Tiny Ron) to question the injured getaway driver, who tells him him the rocket is at the airfield. Cliff’s aspiring actress girlfriend Jenny Blake (Jennifer Connelly) has a bit part in the latest Neville Sinclair film. On set, Sinclair overhears Cliff attempting to tell Jenny about the rocket pack, so he invites her to dinner. Afterward, at a local air show, Cliff uses the rocket pack (and Peevy’s newly designed face-hiding finned helmet) to rescue his friend Malcolm (Eddie Jones), who is drunkenly piloting a bi-plane. Having been seen by the newsreel press in the airshow audience (and Valentine’s gangsters), “The Rocketeer” becomes a media sensation.

Sinclair sends Lothar to Cliff and Peevy’s home to find the rocket pack. The FBI arrives, but Cliff and Peevy escape, while Lothar steals its detailed schematics drawn up by Peevy. Later at the airfield diner, Cliff and Peevy, trapped by several Valentine mobsters, learn that Jenny had a date with Sinclair and of the actor’s involvement in the hunt for the rocket pack. The diner patrons overpower the gangsters, while a bullet ricochet punctures the rocket’s fuel tank, which Peevy temporarily patches with Cliff’s chewing gum. At Sinclair’s home, Jenny discovers that he is a Nazi secret agent and Jenny knocks him cold. She is later detained and forced to leave a message for Cliff to bring the rocket to the Griffith Observatory in exchange for her life. Just before he is arrested by the FBI and taken to Howard Hughes, Cliff hides the rocket pack. Hughes reveals his rocket is a prototype, similar to one that Nazi scientists have been so far unsuccessful in developing. Secord asks what the interest is the rocket pack, and Hughes shows a horrifying propaganda film depicting flying soldiers invading the United States and hoisting a Nazi flag over the White House. When Hughes demands the return of the rocket, Cliff explains that he needs it to rescue Jenny; he escapes, inadvertently leaving behind a clue to where he is headed.

Cliff flies to the rendezvous where Sinclair demands the rocket. He divulges to the mobsters that the actor is a Nazi spy; Valentine turns his weapon on Sinclair and Lothar. Sinclair summons 60 heavily armed Nazi S.A. commandos hidden at the observatory. The Nazi rigid airship Luxembourg appears overhead to evacuate Sinclair. FBI agents suddenly announce their presence, having secretly surrounded the area; they and the mobsters join forces to battle the Nazis. Sinclair and Lothar escape, dragging Jenny with them aboard the airship.

Cliff flies to and boards the airship, but during the ensuing showdown, Jenny accidentally sets the bridge on fire using a flare gun. Sinclair takes the rocket pack to save himself, saying “I’ll miss Hollywood”. This proves an ironic statement, as Cliff removed the makeshift chewing gum patch from the tank which is now leaking, causing Sinclair to plummet to his death near the “HOLLYWOODLAND” sign, and the resulting explosion destroys the LAND part. Lothar is engulfed in flames as the airship explodes, but Cliff and Jenny are rescued at the last moment by Hughes and Peevy flying an autogyro. Hughes later presents Cliff with a brand-new Gee Bee air racer and a fresh pack of chewing gum. As Hughes leaves, Jenny returns to Peevy his rocket blueprints that she found in Sinclair’s home; Peevy decides that, with some modifications, he can build an even better one.

A smashing piece of escapism, no pretensions or ideas above its station. The willingness to tap into the basic premise of a comic book actioner and entertain in grand Hollywood terms, A must see.