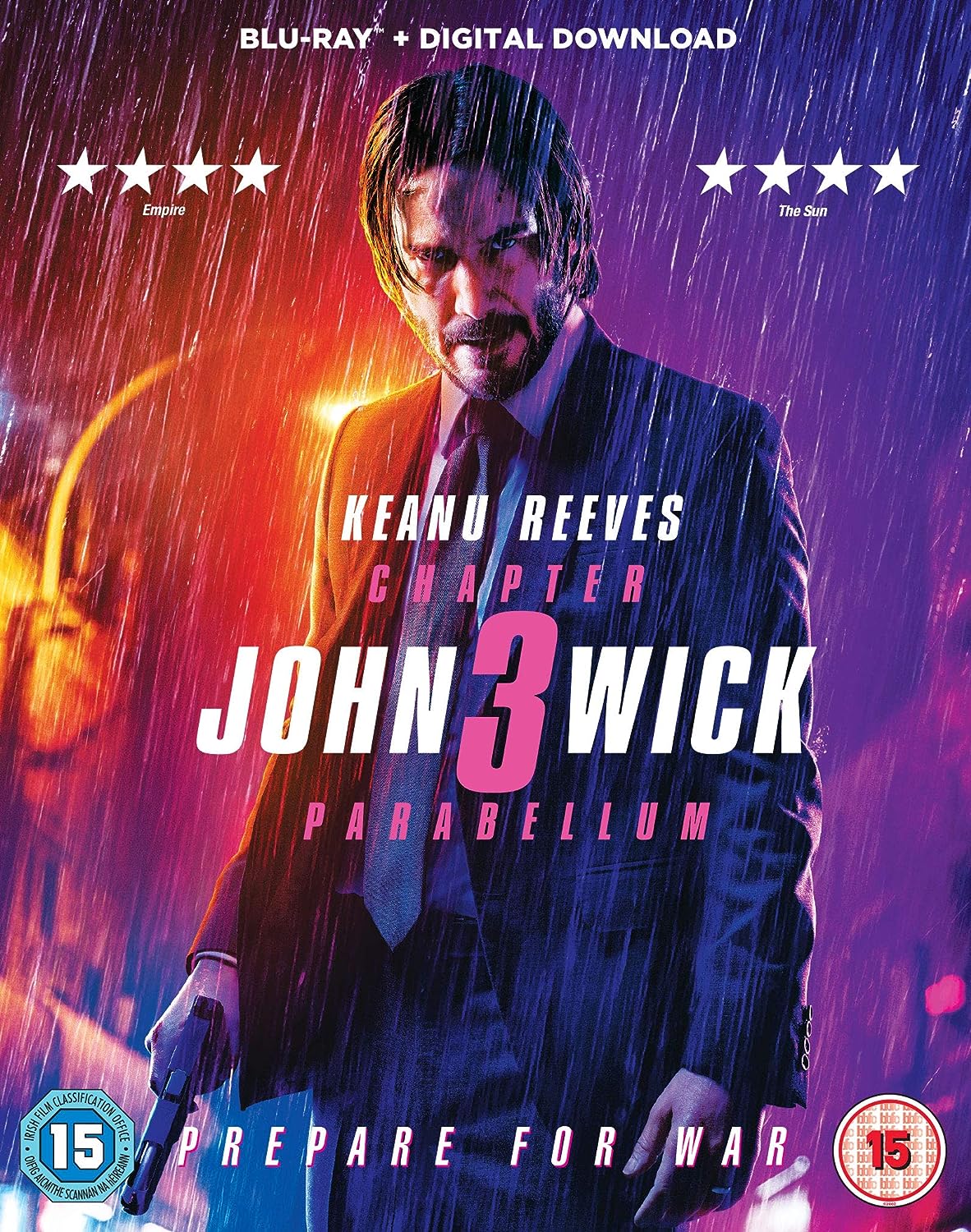 Ten minutes after the conclusion of the previous film, former hitman John Wick is now a marked man and on the run in Manhattan. After the unsanctioned killing of crime lord and new member of the High Table Santino D’Antonio in the New York City Continental, John is declared “excommunicado” by his handlers at the High Table and placed under a $14 million bounty that rises each hour. On the run from assassins, John reaches the New York Public Library and recovers a crucifix necklace and a “marker” medallion from a secret cache in a book. He fights his way through numerous assassins until he reaches the Director, a woman from his past who used to raise him. She calls him by his real name – Jardani Jovanovich. She accepts the crucifix as a “ticket” for safe passage to Casablanca, Morocco, and has Wick branded to signify that he has used up his ticket. Meanwhile, an Adjudicator with the High Table meets with Winston, the manager of the New York City Continental, and the Bowery King, the leader of a network of vagrant assassins. The Adjudicator admonishes both for helping John kill Santino, a new member of the high table, and both are given seven days to give up their offices or face serious consequences. The Adjudicator hires Zero, a Japanese assassin, afterwards to enforce the will of the High Table. They find the Director while she is watching her ballet students perform. The Director’s penance for helping Wick by putting the ticket above the rules of the High Table is by blood, therefore Zero uses his sword to make a cut through the center of both her hands.In Casablanca, John meets Sofia, a former friend and the manager of the Casablanca Continental. He presents his marker and asks Sofia to honor it by directing him to the Elder, the only person known to be above the High Table, so that he can ask to have his bounty waived. John has Sofia’s marker because he helped get her daughter out in the past. Sofia takes him to an assassin and her old boss named Berrada, who tells John that he may find the Elder by wandering through the desert until he cannot walk any longer. In exchange for this information, Berrada asks for one of Sofia’s dogs; when Sofia refuses, he shoots the dog (who was wearing a bulletproof vest at the time, so is ultimately unharmed). In retaliation, Sofia shoots Berrada, and the duo fight their way out of the kasbah and flee into the desert. Having fulfilled her marker, Sofia leaves John in the desert. Meanwhile, the Adjudicator uses Zero to accost the Bowery King because he did not agree to leave his position after 7 days. As penance the Bowery King is maimed.John collapses from exhaustion in the desert but is found and brought to the Elder. John says he is desperate to live on to “earn” the memory of the love he once had with his wife. The Elder agrees to forgive John but only if he assassinates Winston and continues to work for the High Table until his death. To show his commitment, John severs his ring finger and gives his wedding ring to the Elder. John arrives back in New York City and is pursued by Zero’s men. Zero nearly kills John before his pursuit is halted as they arrive at the New York City Continental, under threat of being declared excommunicado. John meets with Winston, who encourages John not to die as a killer but as a man who loved, and was loved by, his wife.The Adjudicator arrives, but Winston refuses to give up his office, and John refuses to kill Winston. As a consequence, the Adjudicator “deconsecrates” the New York City Continental, revoking its protected neutral ground status. The Adjudicator notifies Zero and sends two busloads of body-armored High Table enforcers as support. With the help of the hotel’s concierge, Charon, John defends the Continental from the enforcers. John is ambushed by Zero and his students. John kills all but the remaining two students, and then fatally wounds Zero.The Adjudicator negotiates a parley with Winston, who explains the rebellion as a “show of strength” and offers penance to the High Table. John arrives, and when the Adjudicator identifies him as a threat to the negotiation, Winston shoots John repeatedly, causing John to fall off of the Continental’s roof. The New York City Continental returns to operation and is “reconsecrated”, but the Adjudicator informs Winston that John’s body has disappeared and that he remains a threat for both of them. Meanwhile, a wounded John Wick is delivered to the heavily-scarred Bowery King, who tells John he is angry with the High Table and will be fighting against them. He asks John if he also feels pissed off, and John responds with, “Yeah”.All in all, John Wick: Chapter 3 – Parabellum isn’t much different from the previous two movies. It isn’t the world’s most intricate or intelligent thriller. However, with brilliant energy, dazzling visuals, stunning action and an invaluable sense of fun, absolutely none of that matters, and it instead proves a solidly entertaining, manic and dizzyingly joyful thriller throughout. 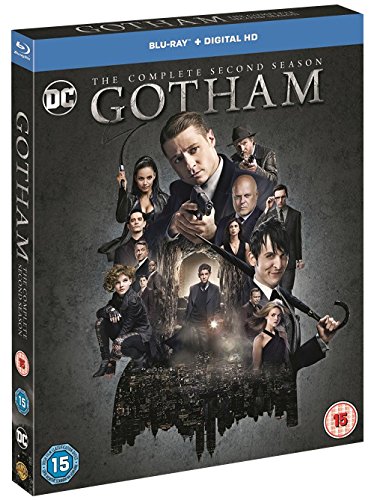 The origin story continues on Gotham and the stakes are higher than ever, as Super Villains more ambitious and depraved are introduced, and a shift of alliances shakes up the fight for power in Gotham City. In season two, Detective Jim Gordon (Ben McKenzie) and the ethically questionable veteran Detective Harvey Bullock (Donal Logue) remain at the forefront of the fight against crime in this dangerously corrupt city. While confronting Gotham’s most notorious criminals, however, Gordon’s moral compass begins to waver, but he is taken under the wing of Nathaniel Barnes (Michael Chiklis), a law-and-order zealot who is unafraid of making enemies. At the same time, Gordon continues his quest to gain the trust of the young Bruce Wayne (David Mazouz), who is on a clear path towards the man he is destined to become, after discovering his father’s deepest secrets, with the help of his trusted butler and mentor, Alfred Pennyworth (Sean Pertwee), and newfound ally at Wayne Enterprises, Lucius Fox (Chris Chalk).

In the epic turf war that occurred at the conclusion of season one, Oswald Cobblepot aka The Penguin (Robin Lord Taylor) battled his way into power over Gotham’s underworld. Heading into season two, Gotham will continue to follow the evolving stories of the city’s most malevolent villains: Edward Nygma/The Riddler (Cory Michael Smith), whose transformation from Gotham PD’s forensic expert to psychologically unhinged villain continues; Selina Kyle/the future Catwoman (Camren Bicondova), whose hard-knock existence propels her into a life of crime; and the increasingly unstable Barbara Kean (Erin Richards), who is out for Gordon and his girlfriend, Dr. Leslie Thompkins (Morena Baccarin). Also hoping to leave his mark on the city is Theo Galavan (James Frain), the billionaire industrialist, who appears to be the savior for whom Gotham has been waiting. Theo, along with his sister and lead enforcer, Tabitha Galavan aka Tigress (Jessica Lucas), keep their centuries-old vendetta hidden, as they manipulate their way to power.

Here in Season Two, there is far less dependence on self-contained episodes and more emphasis on the development of long running and serialised story arcs. In my opinion, this is better than Season One.
This remains a highly entertaining show.