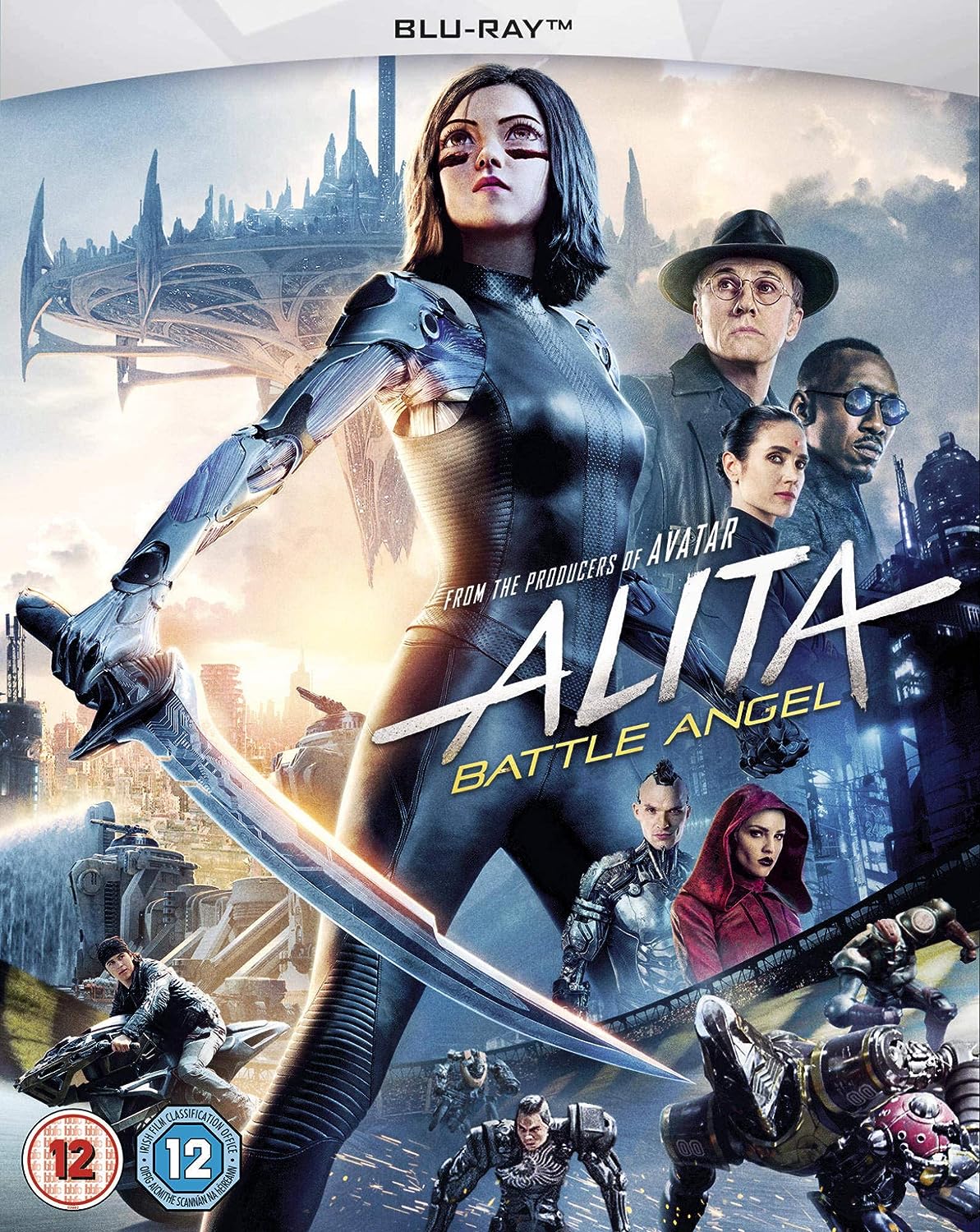 In 2563, 300 years after Earth is devastated by a catastrophic interplanetary war known as “The Fall” or “The Great War”, scientist Dr. Dyson Ido discovers a disembodied female cyborg with an intact human like brain. Ido attaches a new cyborg body to the brain and names her “Alita” after his deceased daughter. Alita awakens with no memory of her past, meets Dr. Chiren, Ido’s estranged ex-wife, and befriends Hugo, who dreams of moving to the wealthy sky city of Zalem. Hugo introduces Alita to Motorball, a battle royale racing sport played by cyborg gladiators. Secretly, Hugo robs cyborgs of their parts for Vector, owner of the Motorball tournament.One night, Alita follows Ido; they are ambushed by cyborg serial killers led by Grewishka. Ido is injured, and Alita instinctively fights using “Panzer Kunst” (a German expression, meaning “the art of the armor” literally “armor art”), a lost combat art for machine bodies, kills two of the cyborgs and damages Grewishka, who retreats underground. Ido reveals that he is a Hunter-Warrior. Grewishka goes to Dr. Chiren for help, who is working for Vector. Despite Alita believing that fighting will help her rediscover her past, Ido discourages her from becoming a Hunter-Warrior. Alita finds a highly advanced cyborg body in a crashed spaceship outside the city. Recognizing that the body is a Berserker — deadly shock troops of the enemy nation United Republics of Mars (URM) from the Great War — Ido refuses to install Alita in it.Frustrated with Ido, Alita goes off by herself and registers as a Hunter-Warrior. At the Kansas Bar, she and Hugo are unable to recruit other Hunter-Warriors to her cause of taking down Grewishka. Zapan, a Hunter-Warrior, provokes Alita, and she severely beats him in a fight, triggering a chaotic bar brawl until Ido intervenes. An upgraded Grewishka arrives and challenges Alita to a duel, revealing that he has been sent by Zalem’s technocrat overlord, Nova, to destroy her. Despite her courage and combat skills, Alita’s body is sliced up by Grewishka’s chain-bladed fingers, but Ido, Hugo and Hunter-Warrior McTeague arrive and force Grewishka to retreat. Ido apologizes and transplants Alita into the Berserker body.Having fallen in love with Hugo, Alita enters a Motorball tryout race for the prize money to send Hugo to Zalem. Hugo’s relationship with Alita leads him to decide to quit his secret job. He confronts Tanji, but Zapan appears, murdering Tanji and the cyborg and framing Hugo, though he escapes and calls Alita for help; she abandons the race and finds him just as Zapan does. Zapan mortally wounds Hugo. Dr. Chiren offers to save Hugo by attaching his severed head to Alita’s life support system. When Zapan sees through the trick and attempts to stop Alita, the guard mech stops Zapan from stealing her claim on Hugo’s bounty, and Alita seizes his prized Damascus blade and slices most of his face off.Ido transplants Hugo’s head onto a cyborg body and tells Alita that Vector’s offer to help Hugo reach Zalem was a lie; as an exiled citizen of Zalem, Ido is certain that citizens of Iron City cannot enter Zalem unless becoming a motorball champion. Alita storms the factory and confronts Vector, who reveals that Chiren has been harvested for her organs. Vector summons Grewishka, but Alita’s new nanotechnological body allows her to easily destroy him. She forces Nova to speak to her through Vector. When Nova threatens to harm her friends, Alita fatally stabs Vector. Ido tells Alita that Hugo has fled to climb a cargo tube towards Zalem. Alita catches up to him and pleads with him to return with her. He agrees, but a serrated defense ring dropped by Nova shreds his body and throws him off the tube. Alita catches him but cannot pull him up, as his arm is breaking off. Hugo thanks Alita for saving him before falling to his death.Months later, Alita is the star of the Motorball tournament. Cheered on by the crowd, she pledges vengeance by pointing her sword toward Zalem, where Nova watches from above, smirking.Marvelous effect with some great actions make this movie not to be missed seeing it in the big screen. But the thing I love the most is Alita herself. There were a few times I had a smile on myself watching Alita as she was so loveable and badass. Really really hope it will goes beyond just this one movie as the world building in Alita was so fascinating and of course, need to see more Alita. 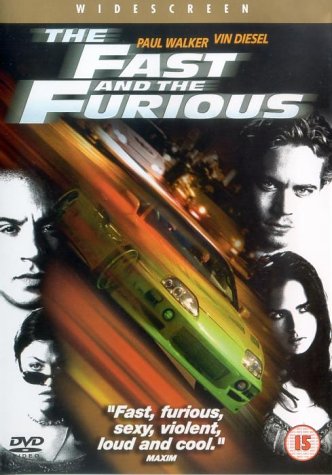 In the docks outside Los Angeles, a semi-trailer truck is loaded with electronics. On the road, it is hijacked by three heavily modified black Honda Civics with green underglow. The Honda drivers fire a grappling hook into the truck’s windshield, knock out the driver, and corral the semi allowing them to heist the electronics and escape.The next day, undercover LAPD officer Brian O’Conner is assigned to find the gang responsible for the crimes. Brian uses his cover job at an auto parts shop to infiltrate the L.A. street racing scene. While visiting Torreto’s Market, a local diner, he flirts with the shop’s owner, Mia Toretto, who is the younger sister of a well-known street racer, Dominic Toretto. Vince, one of Dominic’s henchmen and who has a crush on her, starts a fight with Brian, which Dominic breaks up.During a local racing gathering, Brian arrives with his 1995 Mitsubishi Eclipse GS, and Dominic arrives in his 1993 Mazda RX-7. Dominic organizes a drag race with himself, Brian, and two other drivers. Despite monetary bets, Brian wagers pink slips for his car. During the race, Brian blows his engine, handing the victory to Dominic. As Brian prepares to give Dominic the keys, the LAPD arrives, forcing everyone to flee. Dominic parks his Mazda into a local garage to limit suspicions by walking home, but is spotted by a police cruiser. Brian arrives and saves him from the cops. The duo ventures into the territory of Dominic’s old racing rival, Vietnamese gang leader Johnny Tran and his cousin, Lance Nguyen. Tran and Lance blow up Brian’s Eclipse. Afterwards, Dominic tells Brian that he owes Dominic a “ten-second car”, a car that can drive a quarter mile in 10 seconds from a standstill.Brian goes to Dominic’s garage, where he offers his skills as a driver and a mechanic. He begins dating Mia, much to Vince’s dismay. Brian investigates Hector and Tran, convinced that Tran is responsible for the truck hijackings. He is cornered by Vince and Dominic, who demand an explanation. Brian lies about checking the cars of his rivals for the upcoming Race Wars, a street racing event in the desert. Brian, Vince, and Dominic check out Tran’s garage, and Brian notices a shipment of electronics in the garage. Meanwhile, Brian and Dominic build a replacement car for the Eclipse, a 1995 Toyota Supra.Brian reports the batch of electronics to his superiors at the LAPD and FBI, and they arrest Tran and Lance. It turns out the electronics had been bought legally, leading to the duo’s release. Despite his own doubts, Brian is now forced to assume that Dominic is the actual coordinator of the truck heists. Brian’s superiors give him 36 hours to find the perpetrators, as the truckers are now arming themselves to defend themselves against hijackings. At the Race Wars, Jesse, another of Dominic’s henchmen, wages his father’s Volkswagen Jetta to Tran, but flees with the car after he loses. Tran confronts Dominic to claim the car, and then mocks him, accusing him of reporting him to the police. This leads to Dominic and Tran engaging in a fight. Later that night, Brian notices the crew leaving, and realizes that Dominic is indeed the hijacker. He reveals his true identity to Mia and convinces her to reveal the location of the Civics and aid him in his plans.Dominic, Vince, Dominic’s girlfriend Letty, and another henchman Leon, prepare to hijack a semi-trailer truck. However, the truck driver is armed and uses aggressive counter-hijack tactics against Dominic’s gang. Vince is trapped on the truck’s hood having been shot, while Letty’s car is knocked over and flips from the highway, later saved by Leon. Brian arrives with Mia, who commandeers the Supra while Brian rescues Vince. When Dominic arrives, Brian is forced to blow his cover and call for a medical evacuation to rescue Vince. Dominic leaves with Mia and the rest of the crew after Vince is saved.Brian arrives at Dominic’s house to ask him about Jesse’s whereabouts, saying that he’ll get the cops to find him before Tran does, but Jesse arrives, apologizing for his actions, and is then killed in a drive-by shooting by Tran and Lance on dirt bikes. Dominic and Brian pursue them, with Dominic ramming Lance’s bike off the road before he can shoot Brian. Brian shoots Tran, who loses control of the motorcycle and hits a curb, breaking his neck and killing him instantly in the process. Brian sees Dominic in the distance. Brian proceeds to chase after Dominic, culminating in a quarter-mile drag race. The race ends in a dead heat and they barely manage to cross a railway crossing before a train passes by, but Dominic violently crashes his father’s 1970 Dodge Charger R/T into a truck. Instead of arresting Dominic, Brian gives him the keys to his own car, telling him he still owes him a ten-second car; Dominic goes in the car, and is able to escape the police. In a post-credits scene, Dominic is seen driving through Baja California, Mexico, in a 1970 Chevrolet Chevelle, having presumably abandoned the Supra.All in all the cars are hot, the girls are hotter, the cars are fast, the guns are loaded, and for the more serious, the relationship between Dom, Mia, Vince, Letty, and the others is amazing. A great movie that started a franchise.