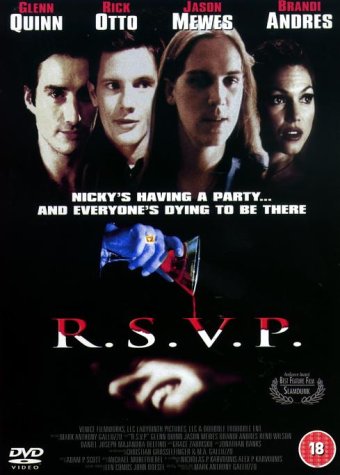 Rick Collier (Rick Otto) has been studying serial killers for a while and thinking he can pull of a great mass murder he has a party in honor of his best friend, Jimmy Franklin (Lucas Babin). He invites all his friends including Jordan McNeil (Brandi Andres), Garret (Reno Wilson), Cricket (Jeanne Chinn), Terry (Jason Mewes), and John Skyles (Daniel Joseph). Before the party Nick invites Jimmy over and kills him. At the party they are convinced he is running late and are joined by his mother (Grace Zabriskie), his father (Jonathan Banks), and Leigh (Nora Zehetner). Prof. Hal Evans (Glenn Quinn) shows up too and later on next door neighbor Callie (Majandra Delfino) joins the party. Slowly Nick begins to pick them off one by one secretly until only Jordan and Hal are left to confront him.

The wonderful actors and actresses are one of the main highlights here. The actors are mainly relatively unknown and surprisingly this works wonders here and hopefully we will see more of them in the future. The film does feature a cleverly ingenious scene when Jimmy’s mom is trying to call him because he hasn’t arrived yet Nick quickly turns on the stereo and turns it up to the highest sound to cover up the fact that Jimmy’s body is in the house and nobody can hear his cell phone ringing. Nick later states he should have taken the phone out to begin with, but he needed to style points. Classic! Nick is another highlight. He has the ability to be handsome, manipulative, and trusting. He often lures the victim into a false sense of security before killing them. A classic example is when he is in the bathroom with Leigh and begins to come onto her sexually and he works his hands up to her neck and out of the blue snaps it. Totally unexpected as you know something is going to happen, but you don’t know what. In most slashers the music becomes real ominous and your speakers blare suspenseful music and you know the kill is going to happen. Almost like a forward, but in this scene the atmosphere and lighting is upbeat like a disco floor and you’re waiting for that ominous music to start to creep in and then Leigh will bite it.

This never happens and breaks a standard horror/slasher rule with the music. In fact the whole musical score is original and the Joice of musical keys in places where you wouldn’t expect them really helps this out. The way Nick names off a few common reasons why killers do what they do so the people can sleep better at night and how the world thinks they can make sense of every sick thing that goes on this world is hilarious, but not funny at the same time because almost every modern day slasher has this formula where the killer explains his motivation and if you look back at Michael Myers or Jason they have no real motive. Sure Michael wants to kill his bloodline, but it’s his choice and yes they did introduce the Cult of Thorn, but as we see in the film they have no power over him and he chooses to kill. Jason may have started off as avenging his mothers death, but as the series progressed he has become a simple killing machine without a motive. My personal opinion is that killers with motives are scarier. The way Nick chooses his victims to be his closest friends is revolting a strange way. The kills are pretty fresh and original and it also breaks three slasher rules. First the music, then that the heroine usually doesn’t participate in the drugs or smoking, and that the pot head usually dies. This could’ve been way worse.

Thriller, Slasher, and Horror fans will want to check this out as it has enough elements for all three. Recommend