Four years after Jurassic Park was overrun by cloned dinosaurs on the Central American island of Isla Nublar, a young girl named Cathy Bowman wanders around on nearby Isla Sorna during a family vacation, and survives an attack by a swarm of Compsognathus. Her parents file a lawsuit against the genetics company InGen, now headed by John Hammond’s nephew, Peter Ludlow, who plans to use Isla Sorna to relieve the company of financial losses. Mathematician Dr. Ian Malcolm meets Hammond at his mansion. Hammond explains that Isla Sorna, abandoned years earlier during a hurricane, is where InGen created their dinosaurs before moving them to Jurassic Park on Isla Nublar. Hammond hopes to stop InGen by sending a team to Isla Sorna to document the dinosaurs, to help rally public support against human interference on the island. After learning that his girlfriend, paleontologist Dr. Sarah Harding, is part of the team and is already on the island, Ian agrees to go to Isla Sorna, but only to retrieve her.

Ian meets his teammates, Eddie Carr, an equipment specialist and engineer, and Nick Van Owen, a video documentarian. After arriving on the island, they locate Sarah and discover that Ian’s daughter, Kelly, had stowed away in a trailer being used as a mobile base. They then watch as an InGen team of mercenaries, hunters and paleontologists led by Ludlow arrive to capture several dinosaurs. Meanwhile, team leader Roland Tembo hopes to capture a male Tyrannosaurus by luring it to the cries of its injured infant. That night, Ian’s team sneak into the InGen camp and learn the captured dinosaurs will be brought to a newly proposed theme park in San Diego. This prompts Nick and Sarah to free the caged dinosaurs, wreaking havoc upon the camp.

Nick also frees the infant T. rex and takes it to the trailer to mend its broken leg. After securing Kelly with Eddie, Ian realizes the infant’s parents are searching for it and rushes to the trailer. As soon as Ian arrives, the infant’s parents emerge on both sides of the trailer. The infant is released to the adult T. rexes, which then attack the trailer, pushing it over the edge of a nearby cliff. Eddie soon arrives, but as he tries to pull the trailer back over the edge with an SUV, the adult T. rexes return and devour him. The trailer and the SUV both plummet off the cliff. Ian, Sarah, and Nick are rescued by the InGen team, along with Kelly. With both groups’ communications equipment and vehicles destroyed, they team up to reach the old InGen compound’s radio station on foot.

The next night, the two adult T. rexes find the group’s camp. The female T. rex chases the group to a waterfall cave, while Roland tranquilizes the male. Much of the remaining InGen team is killed by Velociraptors while fleeing through a tall grass savannah. Nick runs ahead to the communications center at the InGen Worker’s Village to call for rescue. When Ian, Sarah and Kelly arrive, they are attacked by the raptors. They evade the raptors until a helicopter arrives and transports them off the island. 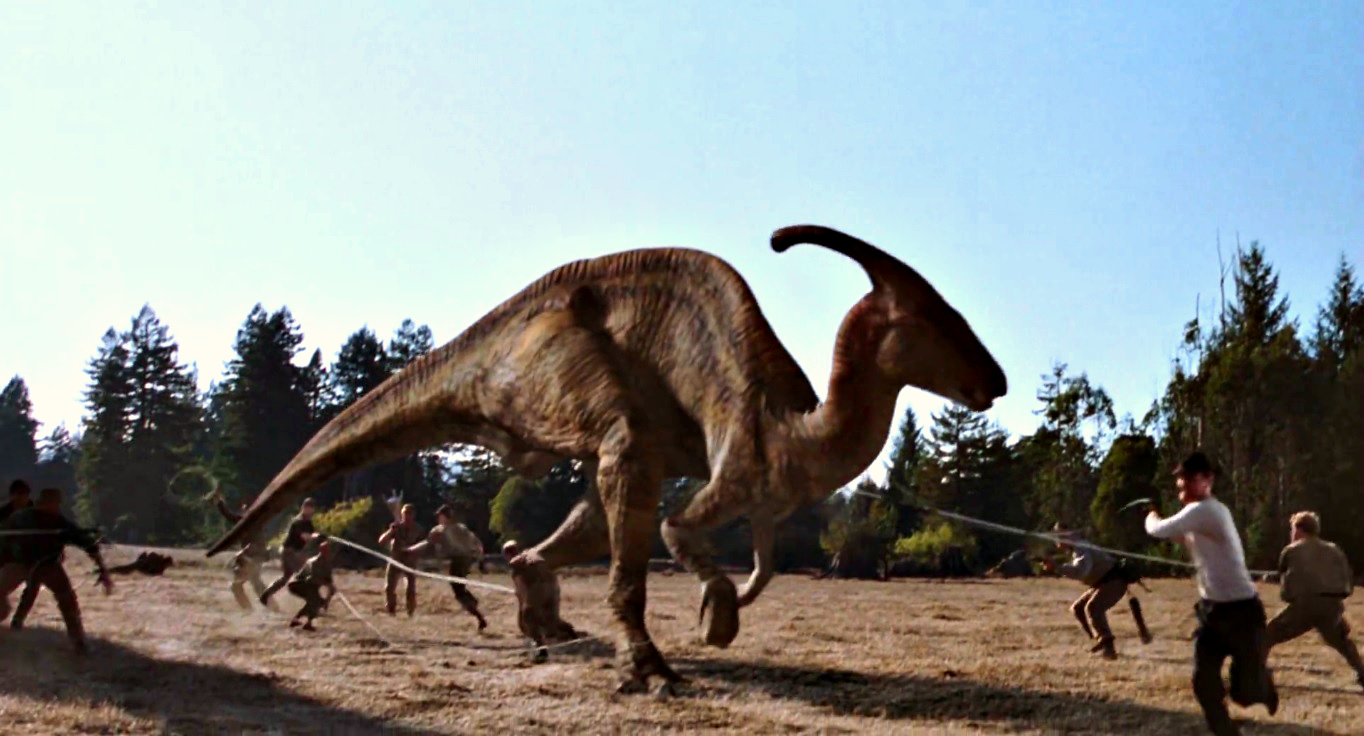 A freighter transports the male T. rex to the mainland, but crashes into the dock after the crew is killed by a creature of unknown species. A guard opens the cargo hold, accidentally releasing the T. rex, which escapes into San Diego and goes on a rampage. Ian and Sarah retrieve the infant T. rex from a secure InGen building and use it to lure the adult back to the ship. Ludlow tries to intervene but is trapped in the cargo hold by the adult T. rex and mauled by the infant. Before the adult can escape again, Sarah tranquilizes it while Ian closes the hold. The T. rexes are escorted back to Isla Sorna, and Hammond says that the American and Costa Rican governments have agreed to declare the island a nature preserve, affirming that “life will find a way”. 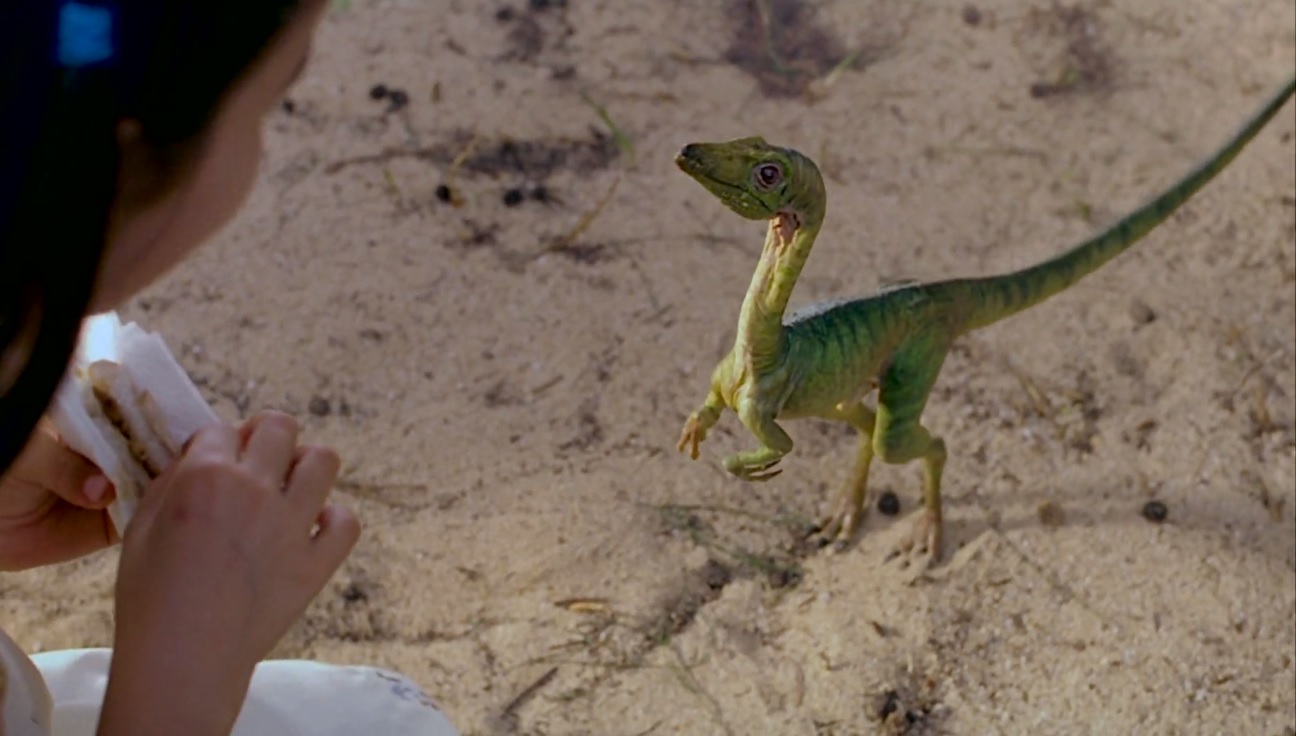 It’s by no way a cheap show, and there are plenty of fun moments. Vince Vaughn and Pete Postlethwaite have fairly interesting characters, even if the rest of the supporting cast is along just to be eaten alive.

Industrialist John Hammond and his bioengineering company, InGen, have created a theme park called Jurassic Park on Isla Nublar, a tropical Costa Rican island populated with cloned dinosaurs. After one of the park workers is killed by a Velociraptor, the park’s investors, represented by lawyer Donald Gennaro, insist that experts visit the park and certify it as safe. Gennaro invites mathematician Ian Malcolm, while Hammond invites paleontologist Dr. Alan Grant and paleobotanist Dr. Ellie Sattler. Upon arrival, the group is stunned to see a live Brachiosaurus.

At the visitor center, the group learns that the cloning was accomplished by extracting dinosaur DNA from mosquitoes that had been preserved in amber. DNA from frogs was used to fill in gaps in the dinosaur genomes. To prevent breeding, all the dinosaurs were made female. Malcolm scoffs at the idea of such controlled breeding, declaring it impossible. The crew witness the birth of a baby raptor and visit the raptor enclosure. Grant, Sattler, and Malcolm have reservations about the idea of resurrecting dinosaurs, but Hammond and Gennaro dismiss their fears.

The group is then joined by Hammond’s grandchildren, Lex and Tim Murphy, for a tour of the park, while Hammond oversees the trip from the park’s control room. The tour does not go as planned, with the dinosaurs failing to appear. The group later encounters a sick Triceratops. The tour is cut short as a tropical storm approaches Isla Nublar. Most of the park employees depart on a boat for the mainland and the visitors return to their electric tour vehicles, except Ellie, who stays with the park’s veterinarian to study the Triceratops.

Jurassic Park’s computer programmer, Dennis Nedry, has been bribed by Dodgson, a man involved with a corporate rival, to steal dinosaur embryos. Nedry deactivates the park’s security system to gain access to the embryo storage room. Nedry stores the embryos inside a canister disguised as Barbasol shaving cream, supplied by Dodgson. Because of Nedry, the power goes out and the tour vehicles become stuck. Most of the park’s electric fences are deactivated as well, allowing the Tyrannosaurus to escape and attack the tour group. Grant, Lex, and Tim escape while the Tyrannosaurus injures Malcolm and devours Gennaro. On his way to deliver the embryos to the island’s docks, Nedry becomes lost in the rain, crashes his Jeep, and is killed by a Dilophosaurus.

Sattler assists the park’s game warden, Robert Muldoon, in a search for survivors, but they only find an injured Malcolm before the Tyrannosaurus returns. Grant, Tim, and Lex spend the night in a tree, and befriend a Brachiosaurus. Later, they discover the broken shells of dinosaur eggs. Grant concludes that the dinosaurs have been breeding, which occurred because of their frog DNA—West African bullfrogs can change their sex in a single-sex environment, allowing the dinosaurs to do so as well, proving Malcolm right.

Unable to decipher Nedry’s code to reactivate the security system, Hammond and the park’s chief engineer Ray Arnold opt to reboot the entire park’s system. The group shuts down the park’s grid and retreats to an emergency bunker, while Arnold heads to a maintenance shed to complete the rebooting process. When Arnold fails to return, Sattler and Muldoon head to the shed. They discover the shutdown has deactivated the remaining fences and released the raptors. Muldoon distracts the raptors while Sattler goes to turn the power back on before being attacked by a raptor and discovering Arnold’s severed arm. Meanwhile, Muldoon is caught off-guard and killed by the other two raptors.

Grant, Tim and Lex reach the visitor center. Grant heads out to look for Sattler. Tim and Lex are pursued by the raptors in an industrial kitchen, but they escape and join Grant and Sattler. Lex restores full power from the control room, allowing the group to call for help. The group is cornered by the raptors, but escape when the Tyrannosaurus suddenly appears and attacks the raptors. Hammond arrives in a Jeep with Malcolm, and the entire group boards a helicopter to leave the island.All these years later, the leaps in visual magic that made Jurassic Park such an eye-opening experience at the time still impress, in a film loaded with thrill-ride action, some genuine scares and suspense and general filmmaking expertise on the part of Spielberg and his team.