The term “noir” gets slapped on a lot of things these days that don’t deserve it, as an all-purpose identifier for productions that are grim and violent and impressed with themselves. It’s there in the news release for Hulu’s new series “Reprisal”: “a hyper-noir story that follows a relentless femme fatale.”

“Reprisal” isn’t really noir, though. It doesn’t have the style or the romance or the fatalism. It’s an example — fairly diverting, but never entirely satisfying — of another currently popular television genre: the fairy tale of aggrieved American manhood, even though in this case the bitter hero is a heroine. Pumped up with rural gothic atmosphere and punctuated with self-consciously curated pop songs, these shows are what happen when you read “Mystery Train” and “Fight Club” and don’t find any appreciable intellectual distance between the two. These fantasias stretch across genres, and if you’re not looking for them you might not realize how common they are among the assertively woke shows that are drawing more attention at the moment. Notable examples include “Banshee” and “Rectify”; current shows like “True Detective” and “Watchmen” share some of the characteristics. Certain actors make a living off them — Ron Perlman, who’s completely in his element as a quietly menacing mob boss in “Reprisal,” has been a stalwart of the genre through “Sons of Anarchy” and “Hand of God.”

The settings are generally Southern (though occasionally Western or Midwestern), and “Reprisal” takes place in an imaginary South, unlocated except for a reference to its being 900 miles from Detroit. (The show was filmed in North Carolina.) Restaurants have names like Slimmy Hank’s Egg Pit and Bolo’s Worldwide Rathskeller; an important scene of the action is a motel called Donuts & Duvets. Time and history are also slightly unmoored. The crucial role of flip phones seems to put us in a more or less recent past, though the prevalence of Tommy guns and vintage hot rods argues for something further back. Newscasts report a glowing orange anomaly in the atmosphere, and characters recall their service in the War for the Archipelago.

At the center of this hothouse setting dreamed up by the writer and producer Josh Corbin is a monolithic road house called a Bang-a-Rang. It’s a little bit Cirque du Soleil, a little bit Kit Kat Klub (with Lea DeLaria in the Joel Grey M.C. role), all with a naughty-high-school-drama vibe, as if Baz Luhrmann and David Lynch had collaborated on an after-hours club inside a Walmart. It’s the headquarters of a criminal gang called the Banished Brawlers, who spend most of their time hanging out at the Bang-a-Rang and getting misty-eyed about how they’ve found a “family” based on shared pain and manly camaraderie. There is a story here also, but it feels wan and patched together — so much of the show’s imagination has gone into the world building and the artisanal Americana and the stylistic flourishes, like the bloody, crunching scenes of violence set to oddball musical choices like “25 or 6 to 4” or “Dammit, Janet” (from “The Rocky Horror Picture Show”).

The Brawlers are enjoying a period of peaceful coexistence with their rival gangs (who have equally pretentious names like the Happiness Ghouls), but they’re haunted by an original sin: the betrayal and brutalization years before of the gang leader’s sister, who was dragged behind a truck and left for dead. “Reprisal” — with the double meaning of revenge and repetition — traces her implacable campaign to clear her name and get satisfaction, with extreme prejudice, from the various men who wronged her. There are cultural-political themes and sexual politics in the mix here. The mostly white good old boys of the Bang-a-Rang feel their long-held privileges, and the sanctity of their fraternal bond, are under unfair assault. The sister is joined in her campaign by a formerly abused, newly empowered homemaker and a pair of small-time African-American Robin Hoods. Caught in the middle are the Bang-a-Rang’s strippers and entertainers, who pick up shotguns when needed. (A lot of the show’s budget went to red light filters, smoke and pasties.)

The sister is played by Abigail Spencer, whose sculpted features and reserved delivery give her an air of retro glamour that’s been exploited before in the lightweight time-travel adventure “Timeless” and the heavy drama “Rectify” — if you’re trying to bake up a noir, she’s the starter. If there’s a monotone quality to her performance here — as there is to that of Rodrigo Santoro (“Westworld”), who plays the most thoughtful of the Brawlers — it’s probably because the show doesn’t take their characters anywhere we can’t see coming. If you like the combination of violent action, sentimental fantasy, literary pretension and periodic slapstick humor that “Reprisal” offers, you may enjoy it well enough. Or you may wish you were watching something with the energy of “Banshee,” the clammy atmosphere of “Quarry” or the charm of “Hap and Leonard.” But that’s what streaming is for.

Seventeen-year-old Joshua “Josh” McGuire (Rhys Wakefield), expedition bank-roller Carl Hurley (Ioan Gruffudd) and his girlfriend, Victoria “Vic” Elaine (Alice Parkinson), travel to the Esa’ala Cave, an underwater cave exploration site in Papua New Guinea. Josh’s father, Frank (Richard Roxburgh), a master diver, has already established a forward base camp at a lower level inside the cave, where the team has been exploring for weeks. As Josh begins to advertise his disdain for his father and his opinions about cave exploration, the team below prepares to dive into an unexplored area of the system. 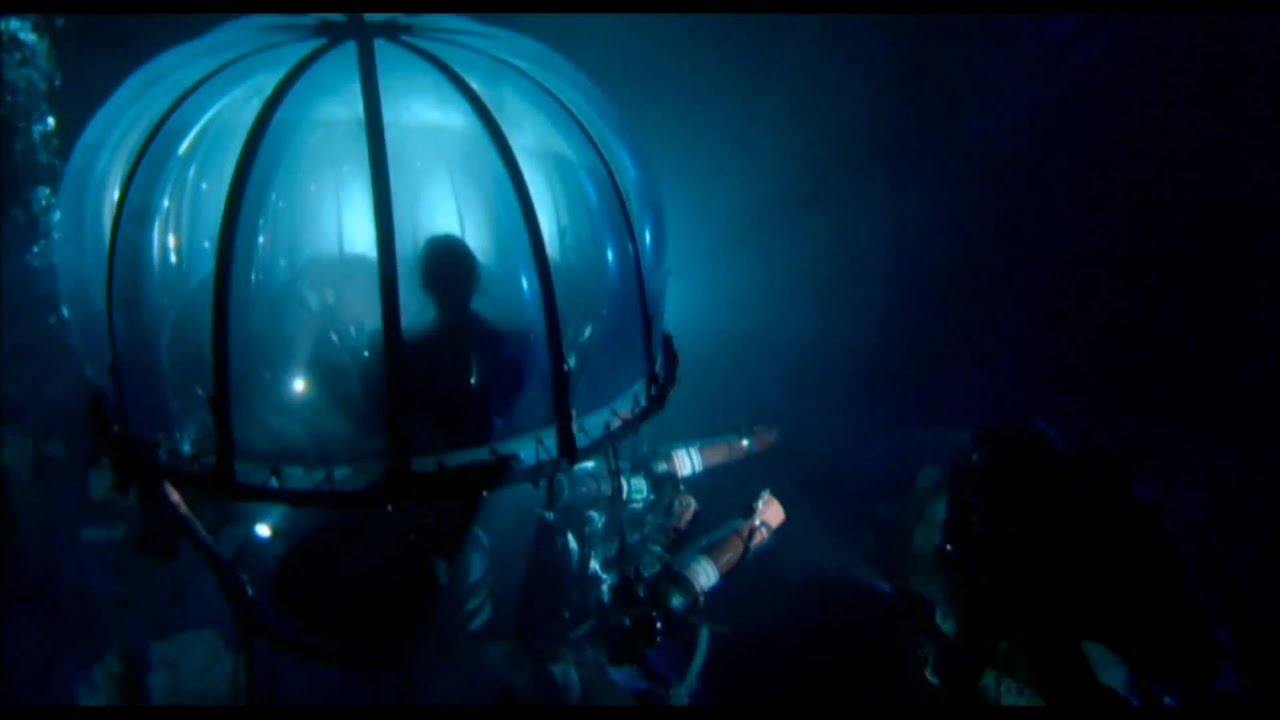 While exploring the entrance to the new system, Judes (Allison Cratchley) experiences a problem with her air tank hose. She loses use of her air mask forcing Frank to buddy breathe. After a few exchanges, Judes panics and tries to keep the mask on, but Frank forces the mask off of her knowing he will not have enough air otherwise to make it back to the team. As Judes drowns, Josh watches on a monitor at “forward camp” and presumes the worst of his father. In a struggle to determine who truly was responsible for her death, it is revealed by Frank that Judes had dived in an exhausted state since they previously had to retrieve the extra bailout tanks, a task Josh didn’t do. Meanwhile, their above-ground crew realizes that a very big storm is preparing to hit their location sooner than anticipated. They proceed to try to reach the team below but to no avail. Josh expresses his desire to return to the surface and with communications down and an uncertain expedition in front of them, team leader Frank agrees to have his son return to the surface with a buddy climber ahead of them.
While Josh climbs back towards the surface with Luko, Liz, and J.D, water begins rushing in from their exit. The storm they were trying to avoid had turned into a cyclone causing flash floods and even engulfing portions of the cave. As J.D. and Liz make their way up through “the elevator” (an area leading up to the main entrance of the cave), Josh realizes he cannot leave his father and friends behind to their doom and relates his decision to Luko who accompanies him back down the cave. As they are making their way back to “forward camp” Josh and Luko notice a light gleaming behind rushing water facing towards them. Frank and the team below had no choice but to leave their camp and head to the surface after flooding began to occur. Frank and Carl were assisting Victoria as she climbed her way up and out of the particular cavern their base was located in. Josh leaps in to help, strapping a rope around a nearby boulder and forming a belay for the team to escape. Unfortunately, the boulder begins to give way leaving Josh to hold Victoria’s line and Luko to hold back the boulder. The water rushes through and forces Victoria and Josh to fall back down into the now flooded base camp. Luko, trying to relieve himself of the heavy boulder, releases his grip and falls down into the rocky walls below. His injuries are catastrophic and the team is unable to get to him before the water takes him away through an underwater tunnel. Their attempt to escape the way they came has failed.

The team now has to find a way out of the cave through the unexplored systems. They grab anything useful at camp and prepare for their long escape. Victoria, panicked and anxious, refuses to wear Jude’s old wetsuit and is given a quick tutorial on how to dive. All of a sudden, Luko’s body washes up near their camp and Josh swims out to check his vitals. Luko is very near death and cannot continue in his condition. Frank has to end his life. The team presses on and makes it through to the other side of the system. Victoria regrets her decision to refuse a wetsuit as she shivers under a blanket with her boyfriend, Carl, beside her. Meanwhile, George an experienced, veteran diver has become ill due to the dive and is dying unbeknownst to the rest of the team. After a short rest, the team continues through the system following the flow of water out towards the sea. George realizes that he cannot continue and after sharing a few words with Josh relieves himself of his pack and hides so as not to burden the rest of the team.
As the team marches on they arrive at a seemingly dead end. A great hole in the bottom of the cave separates them from the other side of their path. Josh uses his climbing expertise to fish a line across and begins to transfer their gear and each other. As Victoria begins to make her way across she catches her hair in her rope gear she is hung on and loses her grip, leaving her hair as the only thing holding her weight. She pulls out her knife after having already endured terrible injury to her head and cuts the entangled area apart falling to her death. The trauma and anxiety drive Carl crazy. He steals the last remaining rebreather they have and makes for the exit. Josh and Frank, however, find another way out through a crevasse in the cavern. Outside the opening they see sunlight as they step out into a giant hole in the earth where an old unidentified WWII Japanese tank had collapsed through the surface years ago. Unfortunately the hole in the middle of the roof where the tank fell is the only opening and they are unable to climb out. They spend the rest of the day there and proceed back into the cave by night. A little later they discover Carl who has gone completely insane and found Victoria’s dead body. Carl attempts to murder Frank but Josh separates the two and temporarily disables Carl. Frank, however, has been gravely injured having fallen on a stalagmite which punctured his back. When Carl wakes, the gravity of his actions is realized and he solemnly swims away through a tunnel. Josh is then asked by Frank to ease his pain by drowning him. Just as he begins to lose hope, Josh does find a way out through the cave to open ocean. He is then seen crawling onto the beach where he is discovered by three people fishing on it.

Sanctum is not for the faint hearted. There are some pretty gruesome deaths and this film builds up to a tear-jerking climax. But as long as you don’t get too worked up over these things, you’ll be fine! Definitely worth watching if you like tension, lots of peril and a great storyline.