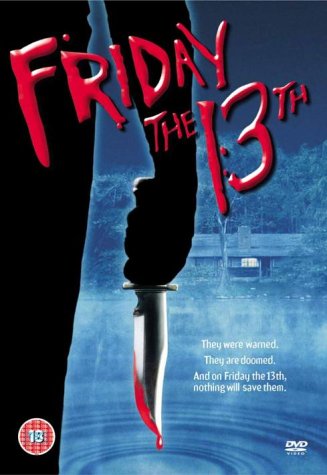 In the summer of 1958, two camp counselors, Barry and Claudette, sneak away from a campfire to have sex. An unknown assailant follows them and is recognized before brutally attacking and killing them.

Twenty-one years later, Annie arrives at the town of Crystal Lake asking for a ride out to the camp. Despite warnings from the town crazy, Ralph, about “camp blood”, a truck driver gives her a ride. On the way he too warns her of a death curse supposedly on the camp after a drowning in 1957, two murders in 1958, and several non-fatal incidents following that. She heeds his warning but cannot back out. He drops her off halfway to the camp, and she finds a ride in a Jeep. She becomes panicked when the unspeaking driver drives past the camp’s entrance and she tries to flee, but the driver surprises her in the forest and slashes her throat. Meanwhile, three new counselors, Marcie, Ned, and Jack, arrive at the camp and meet the camp’s owner, Steve Christy, two of his hands, Bill and Alice, and another counselor, Brenda. After setting them up, Steve leaves for supplies. The sheriff arrives shortly after, looking for Crazy Ralph, who appears shortly after he leaves, disturbing them by proclaiming they are “all doomed” before leaving.

As a storm rolls in, Ned spots someone in one of the cabins and investigates. Meanwhile, Marcie tells Jack about a recurring dream of rain turning into blood. As the storm moves in on them, they go to a nearby cabin to have sex, unaware that Ned is in the upper bunk, dead from a slashed throat. After Marcie leaves the cabin to wash up, Jack is impaled in bed, and someone kills Marcie in the bathroom with an axe. Bill, Alice, and Brenda are playing strip Monopoly when Brenda realizes her cabin windows are open and returns to her cabin. Once there, she hears what sounds like a child calling for help and is lured out onto the archery range where she is killed. At the main cabin, Alice hears Brenda’s screams; she and Bill go searching for their friends, but, discovering the axe in a bunk, are left with more questions than answers. Bill convinces Alice that it is a prank, and they return to the cabin. Meanwhile, Steve returns to the camp on foot and recognizes someone at the entrance before being stabbed and killed. The attacker then turns off the generator, and Bill leaves alone to fix it.

Alice awakens sometime later and goes searching for Bill, only to find his body pinned to the generator room door by arrows. She flees back to the main cabin, and Brenda’s body is hurled through the window from outside. A jeep pulls up and Alice runs out for help, encountering a woman named Mrs. Voorhees, an “old friend of the Christy family.” Mrs. Voorhees sees Brenda’s body and recalls losing her own son Jason, who drowned in 1957 because the counselors watching him were having sex and not paying attention. She then grows unstable and pulls a bowie knife on Alice and attacks her with it. Alice bludgeons her with a fireplace poker and runs out of the cabin, discovering Annie and Steve’s bodies as she flees. Mrs. Voorhees finds her again, and again Alice escapes, eventually hitting Voorhees with a frying pan, so hard that this time she believes she is dead. By the lake Mrs. Voorhees attacks Alice again with a machete. After a violent battle on the beach, Alice gains control and decapitates her attacker. Stricken with shock, Alice then pushes a canoe out onto the lake and falls asleep in it.

The next morning, police investigating see Alice on the lake and call to her. Suddenly, the decomposing body of Jason leaps from the lake, dragging her under the water. She wakes in the hospital, having recalled the murders and the boy in the lake, but the sheriff claims they did not find any boy. After a pause of confusion she then proclaims that “he’s still there” before the camera returns to the lake, now at peace.

The One that started it all as well as kickstarting Kevin Bacons career.A Brilliant Atmospheric Slasher with That Double Belter of a conclusion.

“You’ll Believe a Man Can Fly!” That was the tag-line for 1978’s blockbuster film Superman. Touting both the innovative special effects and the exciting nature of the film, this was enough to get an unapologetic comic book geek like myself into the theaters to see the movie. At the time I enjoyed the film, mostly. While I was very disappointed in the ending, the rest of the film was a great ride that got me back into the theater for a second look. Of course I hadn’t known about the arduous shooting or the conflicts between the producer and the director, but that only showed up on screen indirectly. It has been over a decade since I saw Superman: The Movie and I was afraid that it wouldn’t hold up as well as I had remembered it. While there are some dated parts, the movie still is a lot of fun. 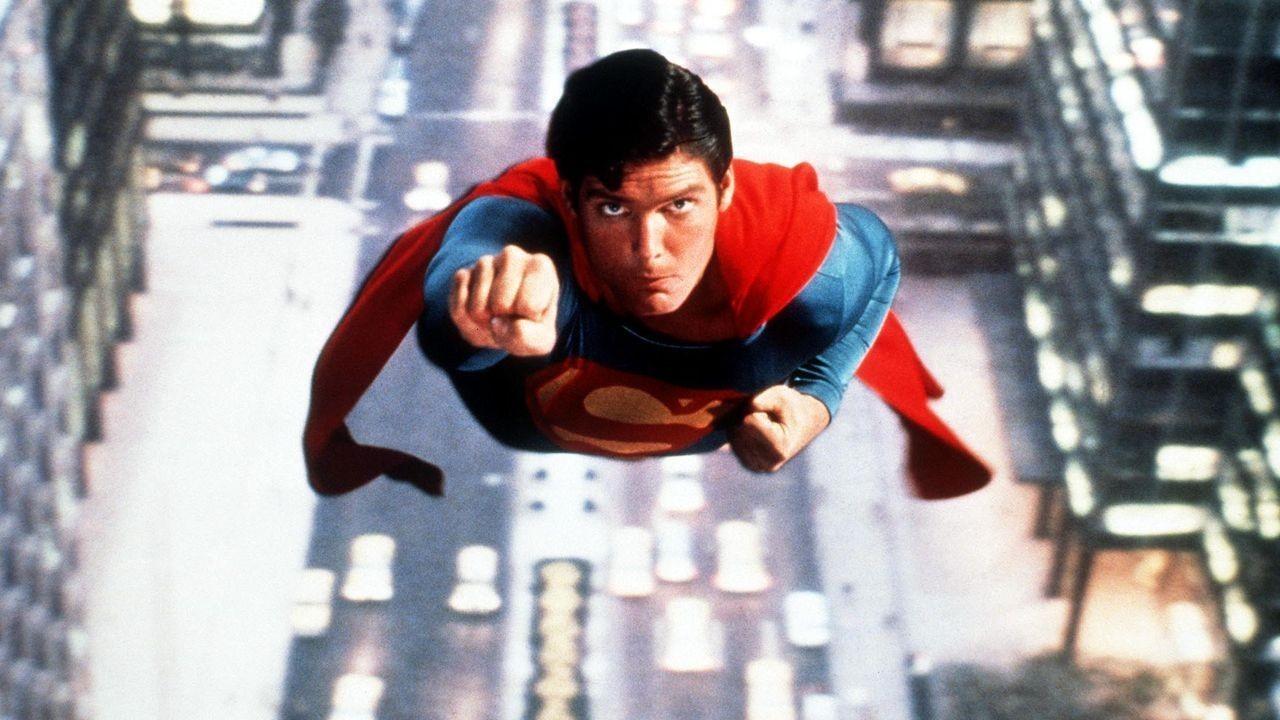 The movie starts on Krypton, where Jor-El (Marlon Brando) is sentencing three villains led by the traitorous General Zod to an eternity of imprisonment in the Phantom Zone. After his task has been completed, the doomed man once again insists that Krypton is going to explode in a matter of days, only to have the council laugh at him once more. Returning home, the scientist puts the finishing touches on the space craft that will save his only son, Kal-El. He finishes just before the planet disintegrates and launches his son towards a distant planet called Earth.

Three years later the craft lands in the field of John (Glenn Ford) and Martha Kent (Phyllis Thaxter). They take the small tot who emerges and raise him as their own instilling a sense of honesty, truthfulness, and morality into the lad. They name him Clark and soon discover that he has “powers above and beyond those of mortal men,” and train him to hide these in order not to attract attention to himself. 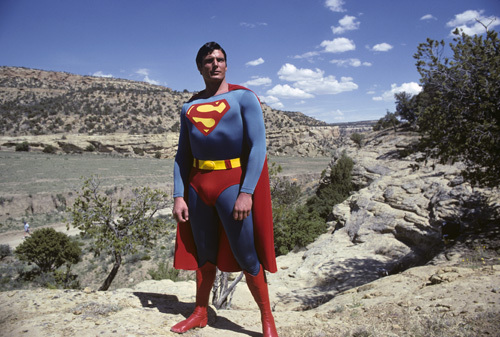 Eventually Clark (Christopher Reeve) leaves home and goes to Metropolis. There he gets a job as a newspaper reporter alongside ace reporter Lois Lane (Margot Kidder) and photographer Jimmy Olsen. When danger strikes however, Clark sheds his 50’s business suit to reveal the red and blue costume of Superman.

It’s not long before danger does strike. The criminal genius Lex Luthor (Gene Hackman) has a plan to make himself incredibly wealthy. He has bought up a lot of desert land just east of the San Andreas fault, land that will be worth millions once the nuclear missiles Lex has reprogrammed detonate on the fault line and cause much of California to sink into the ocean. The only person who can stop this mad man is Superman, but Lex has thought about that too. This is a really fun movie in a lot of ways. Even though the Man of Steel’s origin is known to almost everyone, seeing it play out on film is really enjoyable. Watching a baby Clark hold up a pickup truck when the jack slips is sure to bring a smile to viewer’s faces, likewise the scene where Clark outruns the high school kids in a car who were teasing him. Superman’s first deeds in Metropolis are also highly enjoyable and keep the movie moving along at a good clip.

Christopher Reeve does a fantastic job as Clark Kent/Superman. He has Clark’s nebbish qualities down pat while still being impressive as Superman, a trick that few other actors can pull off. (Even George Reeves was never convincing as Clark in the old Adventures of Superman TV show.) Clark’s ‘just off the farm’ act comes across as being believable and not a parody. The special effects stand up very well, even today. Though the flying sequences lack the “wow” factor they had nearly 30 years ago, they don’t look hokey and dated at all. Superman still looks realistic when flying and the other effects come across as natural too. There are one or two effects that don’t work that well, when Luthor freezes Superman in a block of ice for example, and it’s interesting to note that these were left out of the theatrical cut.

That said there are some aspects of the film that don’t work so well. The goofy sided kick is a bit is dated now, even as it was when the film was made. At one point Lex Luthor even wonders out loud when he surrounds himself with idiots, something the audience had been wondering for a while.

The reprogramming of the nuclear missiles was also something viewers have to take with a grain of salt. The fact that military officers would leave nukes unguarded is rather laughable. The fact that Lex’s idiotic sidekicks could reprogram them is even harder to swallow.

The worst aspect of the film is the ending, and it’s not really the director’s fault. Originally Richard Donner was supposed to direct the first two Superman films, and he managed to shoot much of the sequel while directing this first movie. This was the formula that the producers, the father and son team of Alexander and Ilya Salkind, had used with much success on the two Musketeer movies they made in the mid-seventies. For whatever reason, the constant fighting with the director or just getting cold feet, the Salkinds at the last minute decided not to end this first Superman film with a cliffhanger. Originally Superman was supposed have shot one rocket into space which explodes and released the Kryptonian criminals from the beginning of the movie. That would have worked much better than how the film currently ends.