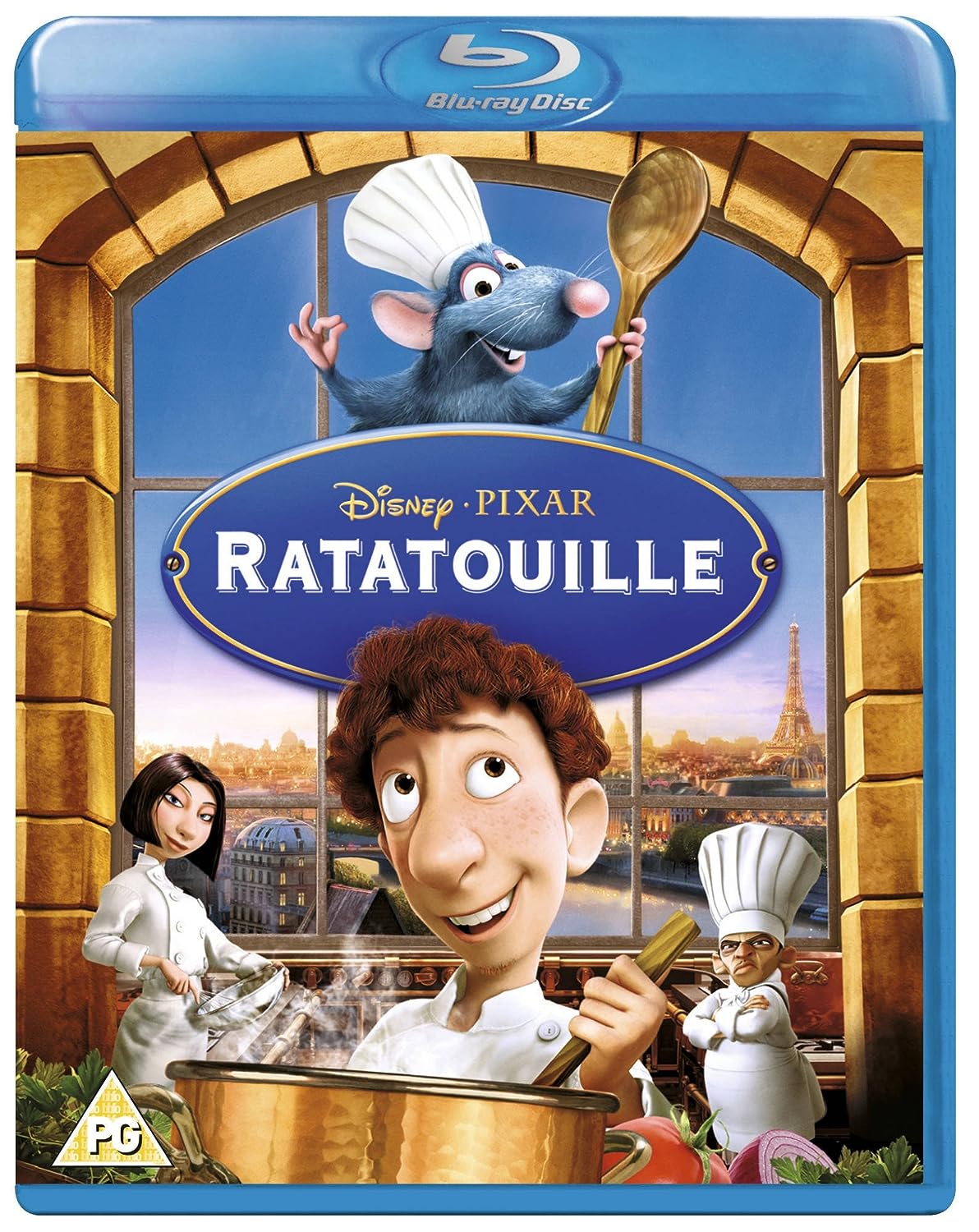 Remy is an idealistic and ambitious young rat, gifted with highly developed senses of taste and smell. Inspired by his idol, the recently deceased chef Auguste Gusteau, Remy dreams of becoming a cook himself. When an old French woman discovers Remy’s colony in her house and attempts to exterminate them, they are forced to flee, and Remy becomes separated from his family in the panic. He ends up in the sewers of Paris and eventually finds himself at a skylight overlooking the kitchen of Gusteau’s restaurant.As Remy watches through the window, a young man named Alfredo Linguini is hired as a garbage boy by Skinner, the restaurant’s paranoid current owner and Gusteau’s former sous-chef. When Linguini spills a pot of soup and attempts to recreate it, Remy recognizes that he is ruining it instead, and repairs Linguini’s mistakes. Linguini catches Remy but hides him when he is then confronted by Skinner for tampering with the soup. As the two argue, the soup is accidentally served and proves to be a success. The Chefs convince Skinner to retain Linguini, who is assumed to be the soup’s creator. When Skinner catches Remy trying to escape, he orders Linguini to kill the rat, but Linguini discovers Remy’s intelligence and decides to keep him instead.On Linguini’s first day as a chef, he and Remy find a way to communicate: Remy guides Linguini like a marionette by pulling on his hair while hidden under Linguini’s toque, while Skinner assigns Colette Tatou, the staff’s only female chef, to train his new cook. Suspicious, Skinner learns that Linguini is Gusteau’s illegitimate son and the rightful heir to the restaurant, which jeopardizes Skinner’s control of the restaurant and the lucrative packaged food enterprise he formed using the restaurant’s reputation after Gusteau’s death. Remy discovers the evidence of Linguini’s inheritance and, after eluding Skinner, gives it to Linguini, who deposes Skinner as owner. The restaurant continues to thrive, and Linguini and Colette develop a budding romance, leaving Remy feeling left out. Remy finds that his clan has come to Paris as well, and is taken to their new lair, but despite his father Django’s attempts to rid his son of his admiration of humans, Remy leaves.France’s top restaurant critic, Anton Ego, whose previous negative review cost Gusteau’s one of its stars, announces he will be re-reviewing the restaurant the following evening. After a disagreement with Linguini, Remy leads his clan to raid the restaurant’s pantries in retaliation, but Linguini catches them and sends them out. Having now discovered Remy’s skills, Skinner captures him in an attempt to use him to create a new line of frozen foods. However, Remy is freed by his brother Emile and Django. He returns to the restaurant, only to find Linguini is unable to cook without him. Linguini apologizes and reveals the truth to the staff, but they leave in disbelief. Colette later returns after recalling Gusteau’s motto, “Anyone can cook.”Django arrives with the rest of the clan, offering to help after seeing his son’s determination. Remy has the rats cook, while Linguini waits tables. For Ego and Skinner, Remy and Colette create a variation of ratatouille, which reminds an astonished Ego of his own mother’s cooking. During the meal, the rats are forced to tie up Skinner and a health inspector to prevent them from revealing the rats’ involvement in the cooking. When Ego requests to see the chef, Linguini and Colette make him wait until the rest of the diners have left before introducing Remy. Ego is stunned and leaves the restaurant, deep in thought. He writes a positive and thoughtful review for the newspaper the next day, stating that Gusteau’s chef (Remy) is “nothing less than the finest chef in France.”Despite the positive review, Gusteau’s is shut down, since Linguini and Remy had to release Skinner and the health inspector. Ego loses his job and his credibility as a critic but funds a popular new bistro, “La Ratatouille”, created and run by Remy, Linguini, and Colette; Ego frequents the bistro for Remy’s cooking. The rats settle into their new home in the bistro’s roof.You can’t ask for a better film than Ratatouille, a classic from Disney/Pixar that is filled with humor, amazing animation, and, most importantly, lots of heart.