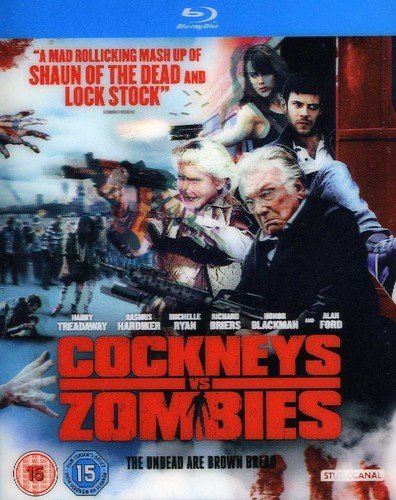 In a building site being developed by Hartman Construction in the East End of London, two builders discover a 17th-century catacomb, sealed by order of Charles II. When they enter to search for treasure, they are bitten by zombies, setting off a zombie outbreak in the area.Elsewhere, Terry MacGuire and his younger brother Andy have planned a bank robbery so they can save their grandfather Ray’s retirement home from being demolished. They recruit their cousin Katy, hopeless Davey Tuppence, “Mental” Mickey, an unstable war veteran who has a metal plate in his forehead, and gather a large supply of weapons. During the robbery, the group find they have crashed an embezzlement deal between the bank manager and the head of Hartman Construction. Expecting to find a few hundred grand, they find themselves staring at 2.5 million pounds in cash. The bank manager had thought they were from Hartman due to their costumes, but quickly realises otherwise and presses an emergency button to summon the police. With the bank surrounded, Mickey takes charge of the escape plan and takes bank workers Emma and Clive hostage. However, upon attempting to leave the bank, the group find that the police have been killed by a growing horde of zombies. They escape in their van with the cash from the vault.Meanwhile, at the retirement home, the zombies attack the residents. Ray and residents Peggy, former gangster Daryl, Doreen and Eric take refuge in the kitchen; Ray also rescues a resident named Hamish and gets him inside. The MacGuires, Katy, Mickey, Davey and their hostages drive through a devastated East End until they reach their safe-house, where they stowed their car earlier. Mickey is bitten by a zombie, and the group finds out from the radio about the extent of the epidemic but don’t know what to do with themselves. Emma pleads with Mickey and Davey to let her and Clive go, saying she does not care about their ‘selfish’ plans, and Katy tells her they are not robbing the bank for themselves, but to save the retirement home.Mickey, growing more irrational and tired of the friendliness of his fellow bank robbers, decides to leave and takes Emma and Clive with him to a side room where he ties them up, and sits down to rest. Soon after, Mickey dies and turns into a zombie. Realising shooting him in the head is failing to kill Mickey, Terry destroys him with a hand-grenade he confiscated earlier. In the subsequent confusion, Clive picks up Mickey’s gun and insists on handing the group over to the police. However, he is promptly attacked and eaten by zombies, and reflexively shoots Davey dead by accident in the process.The group pack the money and themselves into Terry’s waiting car, intending to travel to the retirement home, but on the way they stop to look for Emma’s younger sister. Terry and Emma find her as a zombie, but Emma decides not to kill her in case a cure is found. They set off again, deciding to arm themselves from Mickey’s gun cache. However, the group realise that the car is inadequate for ferrying the pensioners, so Katy hot-wires a traditional red London double-decker bus. 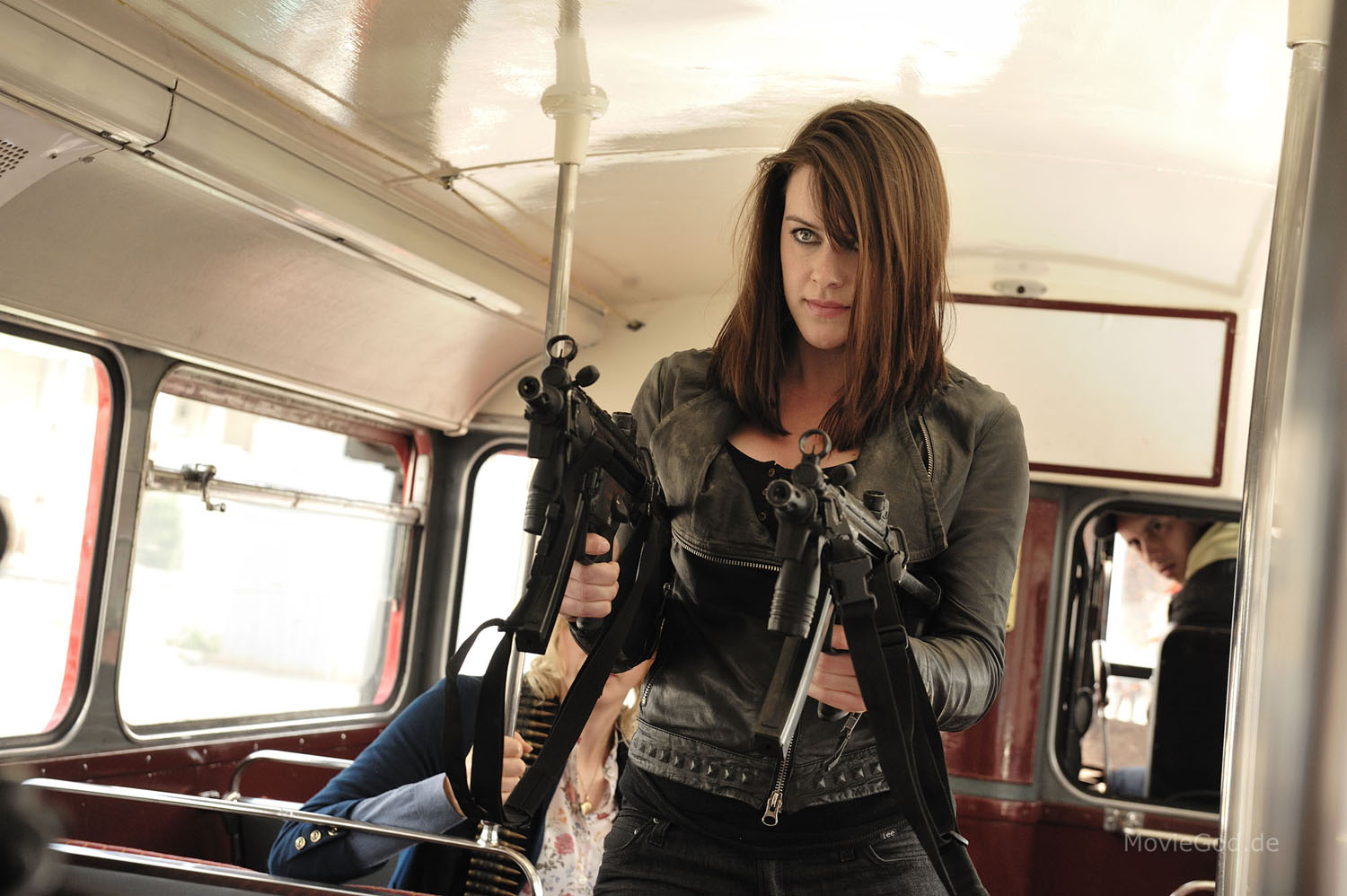 Arriving at the care home, they manage to break the zombie siege and rescue Ray and the other surviving residents. They all escape aboard the bus, but it breaks down before it can reach safety and the group are forced to abandon it. Realising they are close to the river, they head off to find a boat. Making their way to a mooring they find a boat, and Peggy finds the keys, but they realise as they try to pull away that it is still chained up. Ray decides to sacrifice himself to save the others, but he still manages to survive and joins the rest on the boat as they make their final escape. On the river, the group wonder what will happen next; Ray tells them they can take East London back for themselves.

In the end, it is about a fun, gory ride and “Cockneys vs Zombies” sure delivers when it comes to that. However, productions such as “Tucker and Dale vs Evil” or “Shaun of the Dead” have demonstrated that one doesn’t have to rely on formulaic dialog and one-liners so heavily in order to create a fun splatter film that is actually fun. 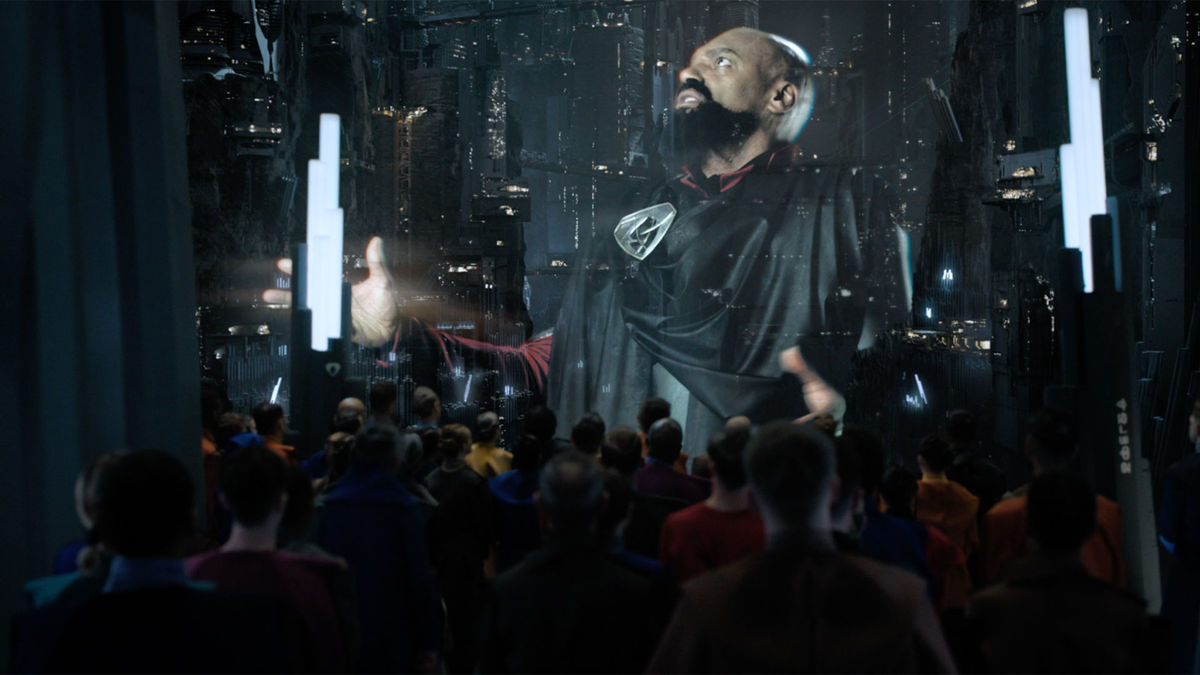 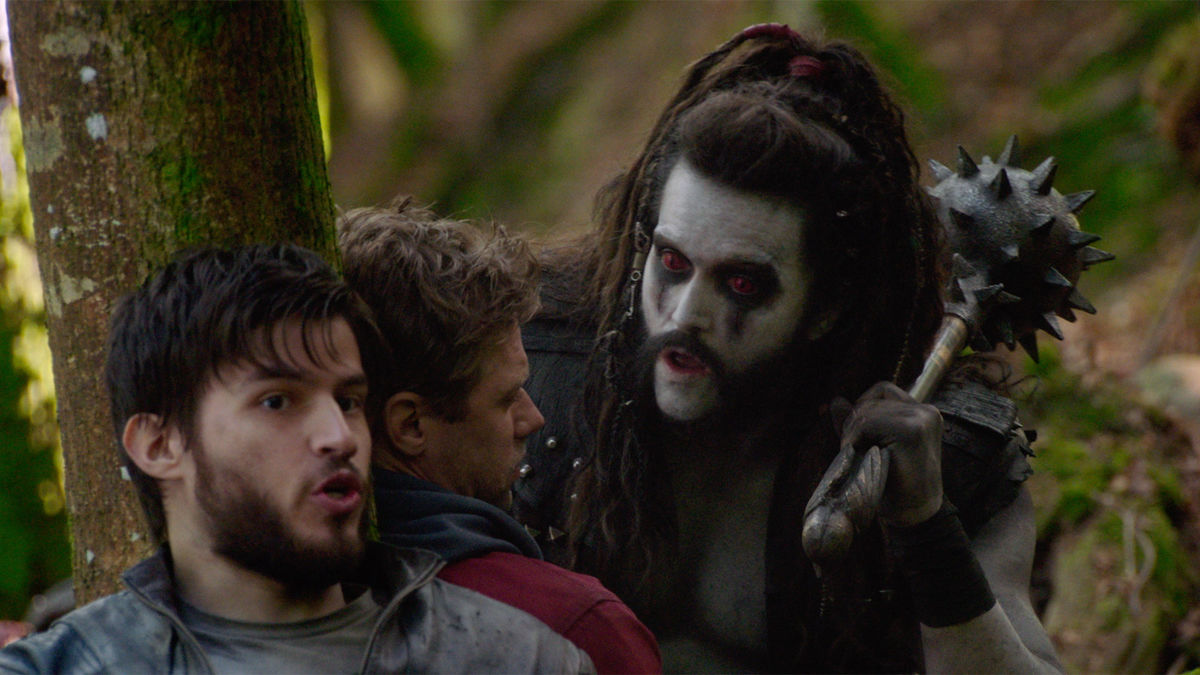 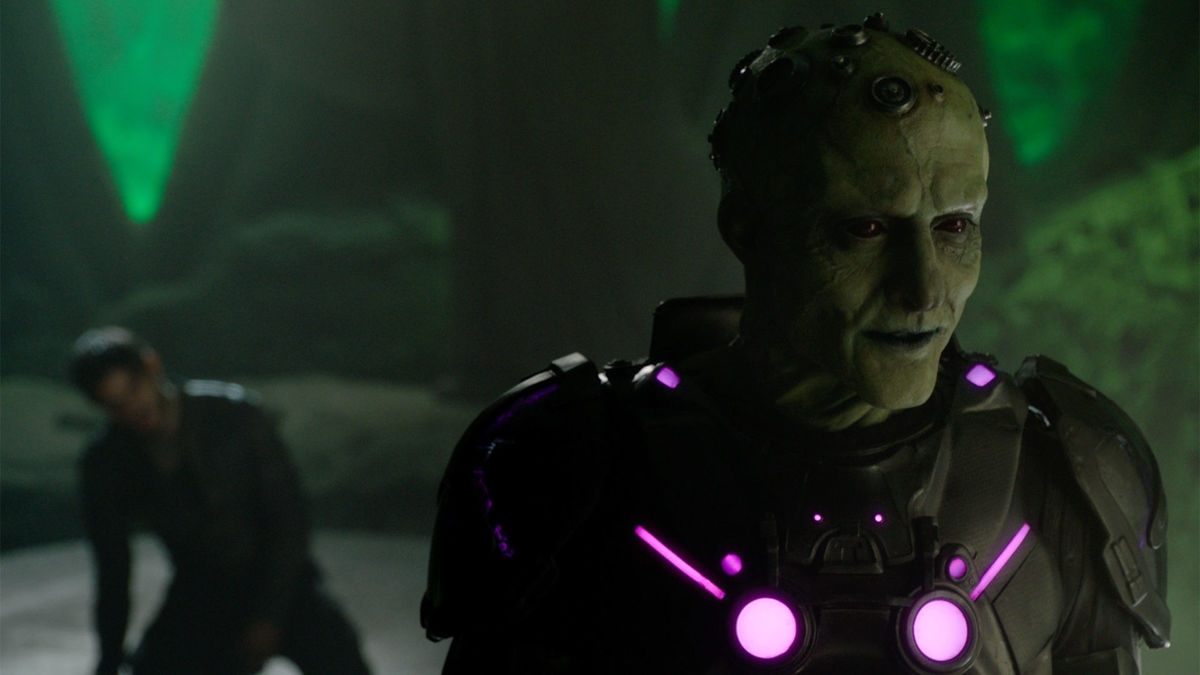 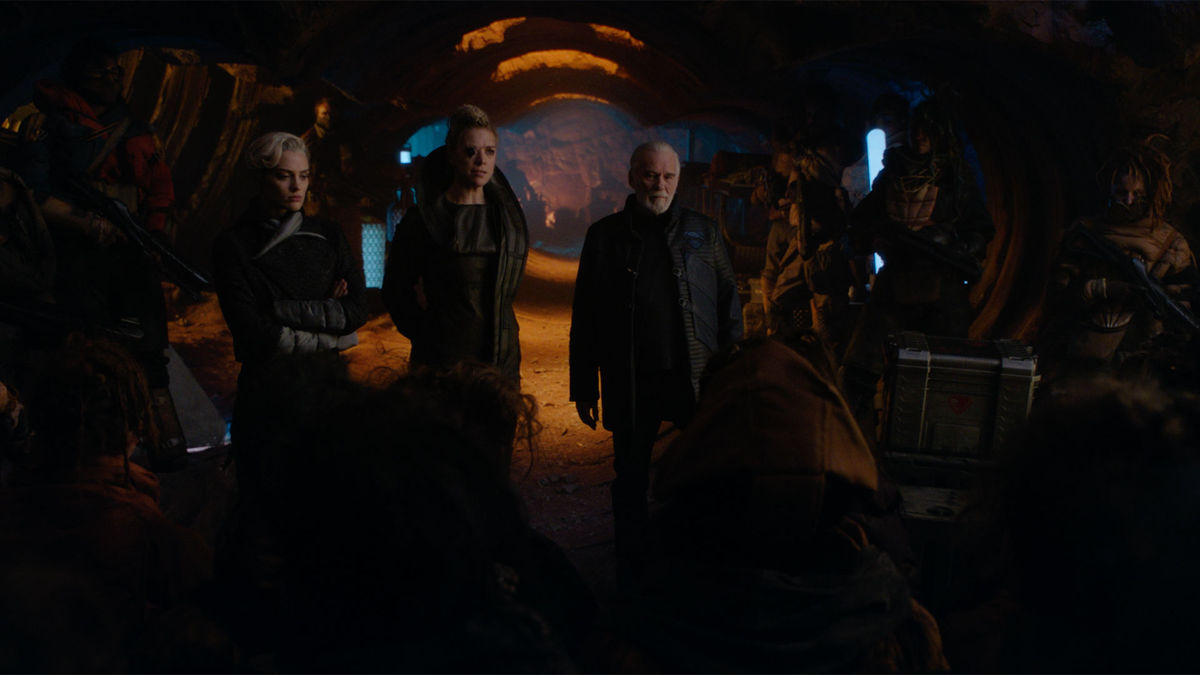 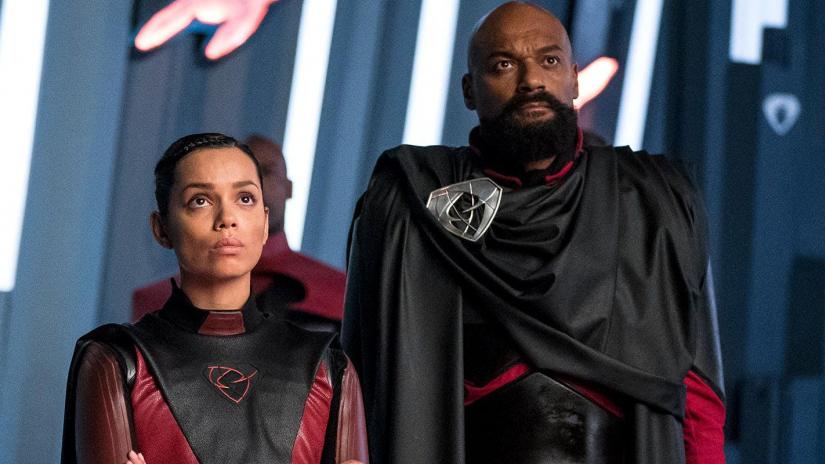 Thadeous and Fabious are sons of King Tallious in the Kingdom of Mourne. They are warriors: Fabious is dashing and skilled and Thadeous is lazy and ineffectual. While celebrating his latest victory over the evil sorcerer, Leezar, who has been ravaging Tallious’s kingdom, Fabious introduces the virgin Belladonna whom he has freed from a tower and wishes to marry. Though his brother makes him the best man, Thadeous skips the wedding after overhearing Fabious’s Knights Elite, led by Boremont, talk about him negatively. The wedding is then crashed by Leezar, who reveals himself to be the one who placed Belladonna in the tower. Leezar re-kidnaps her and flees. Returning to the castle with his servant Courtney, Thadeous is given an ultimatum: join Fabious on his quest to rescue Belladonna or be banished from Mourne.Visiting the Great Wize Wizard, Thadeous and Fabious learn that Leezar is attempting to fulfill a prophecy of a warlock having sex with a maiden when the two moons converge, impregnating her with a dragon that will allow him to take over King Tallious’s kingdom. To destroy Leezar, they are given a magic compass that will lead them to the Blade of Unicorn, located within a labyrinth. On the way there, they learn Fabious’s eunuch slave, Julie, has been reporting to Leezar of their progress and that the Knights Elite are serving the warlock. Fabious sends his mechanical bird Simon to tell the king of the betrayal by the Knights Elite and request reinforcements. Thadeous, Fabious and Courtney are captured by nymphs under their leader, Marteetee, who imprisons them at an arena, where Fabious kills off Marteetee’s finest warrior. In retaliation, Marteetee summons a hydra-like monster to kill them. The brothers are rescued by Isabel, a warrior seeking revenge for her father’s murder at Marteetee’s hands.

Later that night, Thadeous learns that Isabel is also after Leezar for the slaughter of her brothers. The next day, the party learns too late that Isabel steals the compass from Thadeous. Fabious, finally angered by his brother’s selfishness, decides to find the Blade of Unicorn alone as Thadeous and Courtney go to a tavern, where they find Isabel and steal the compass back. But finding that his brother has been captured by Leezar’s men, Thadeous wins Isabel over as they join forces, entering the labyrinth where they encounter a Minotaur. After becoming separated from the others, Thadeous retrieves the Blade of Unicorn and slays the Minotaur. Thadeous and his group make their way to Leezar’s castle and free Fabious, giving him the Sword of Unicorn. As the others kill off Julie, Boremont’s men and Leezar’s three witches, Fabious impales Leezar with the Blade of Unicorn, to prevent him from raping Belladonna.

After their victory, Isabel leaves for another quest and the heroes return home. Fabious and Belladonna marry, while Thadeous is approached by Isabel, who reveals that she has fallen in love with him. However, for them to have sex, he must first slay the witch who has cast a spell on her, locking her in a chastity belt. Though not in the mood to go out, Isabel’s suggestion convinces him to go on a new adventure.

Your Highness is very funny in places, but a bit cringy in others. You have to appreciate the production value that has gone into the film. The set’s, costumes, music, props & special effects are all great & would be worthy of a modern day fantasy film. If you have a bizarre sense of humor, you will still enjoy this a lot.