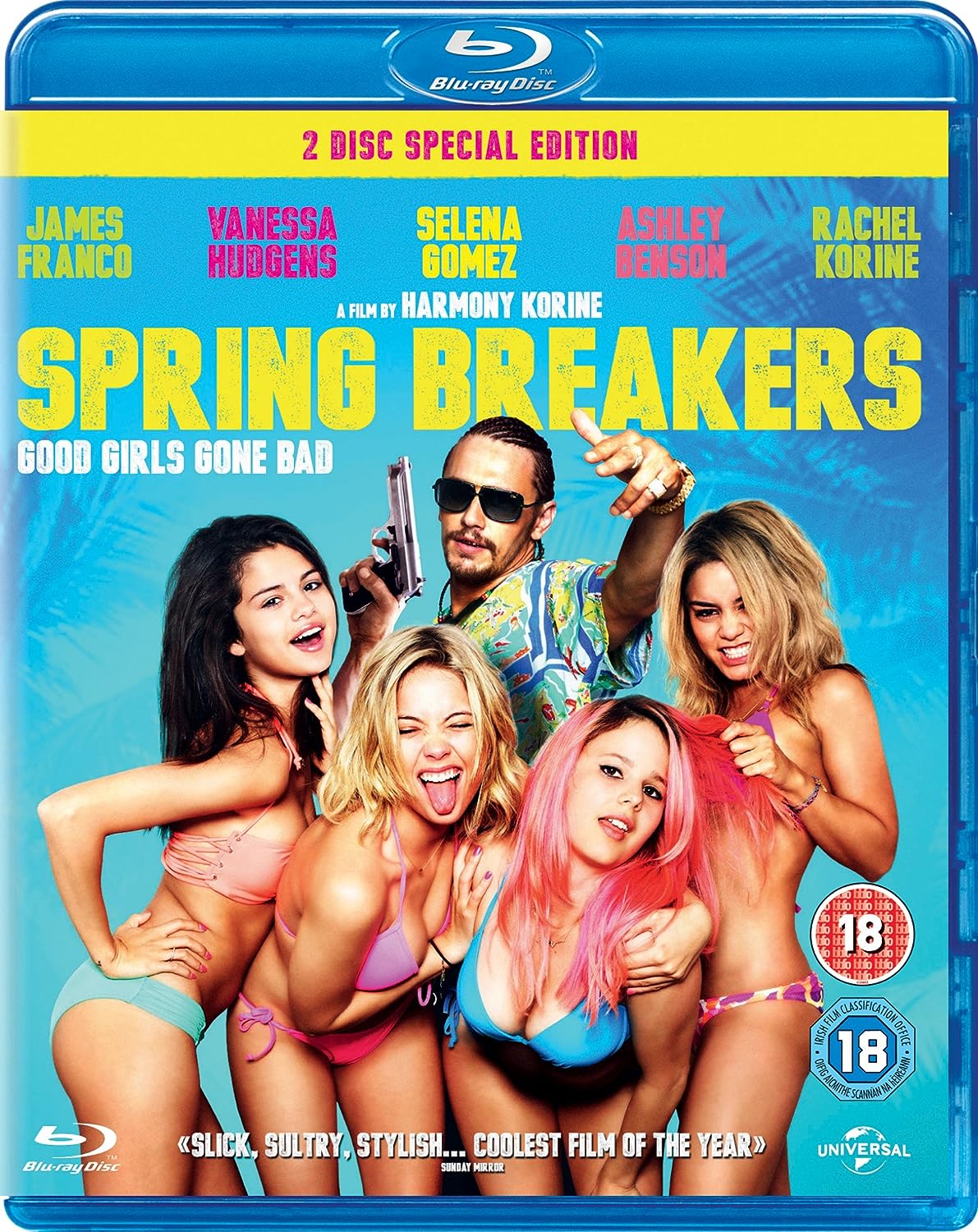 College students Brit (Ashley Benson), Candy (Vanessa Hudgens) and Cotty (Rachel Korine) spend their time partying while their friend Faith (Selena Gomez) attends a religious youth group. As their classmates head to spring break, they are stuck behind due to a lack of money. Desperate to make the trip, Brit and Candy, after getting high on cocaine, don ski masks and use hammers and realistic-looking squirt guns to rob a local restaurant. Cotty drives and later burns a getaway car stolen from one of their professors.

In St. Petersburg, Florida, the girls attend wild beach parties fueled by alcohol, drugs and sex. Cotty, Candy and Brit divulge the details of their crime to a horrified Faith, who keeps quiet about it. After a particularly wild party, all four are arrested. They spend the night in a holding cell, but are bailed out by Alien (James Franco), a local rapper and gangster. Alien charms Cotty, Candy and Brit with his wealth and “bad boy” swagger, but Faith feels uneasy.

Alien takes the girls to a local club frequented by gang members, where Faith becomes even more uncomfortable with his lifestyle. Despite Alien’s attempts to convince her to stay, Faith decides to leave and begs the others to come with her. They refuse, however, and she makes the trip home alone. Alien takes Brit and Candy to a strip club owned by his rival, Big Arch (Gucci Mane), who warns Alien to stop selling drugs in his territory. The girls return to Alien’s mansion, where he flaunts his drug money and cache of weapons, describing his life as the “American Dream”. Brit and Candy suddenly grab one of his guns and threaten to kill him; turned on, Alien performs fellatio on the gun and declares that he has fallen in love with the girls.

Alien arms the girls with pink ski masks and shotguns, and they perform several armed robberies. While in Alien’s car they are approached by Big Arch and another member of his gang, who threaten them and execute a drive-by shooting, wounding Cotty. Alien promises to retaliate, but a traumatized Cotty chooses to return home. Brit and Candy stay behind and begin a sexual relationship with Alien. The three of them decide to take revenge on Big Arch. In a flashforward, the two girls call home, promising to work harder and become better people.

Back in the present, the three travel in a motorboat to Big Arch’s mansion. After docking at the pier, Alien is immediately shot and killed by one of Big Arch’s guards. Brit and Candy continue on, killing Big Arch’s gang before confronting and killing Big Arch himself. During the assault and its aftermath, the camera pans over the dead bodies of Big Arch’s gang while Faith speaks in a voice-over, first heard earlier in the film, describing the beach’s beauty and musing that they have discovered who they truly are. Brit and Candy drive home in Big Arch’s Lamborghini. A final flashback shows the pair kissing Alien’s dead body.

Pretty good film, Very seedy little world that these girls come across, but they are more than up for the challenge. If this sort of thing happens on a regular basis – then look out! Great performance from James Franco.