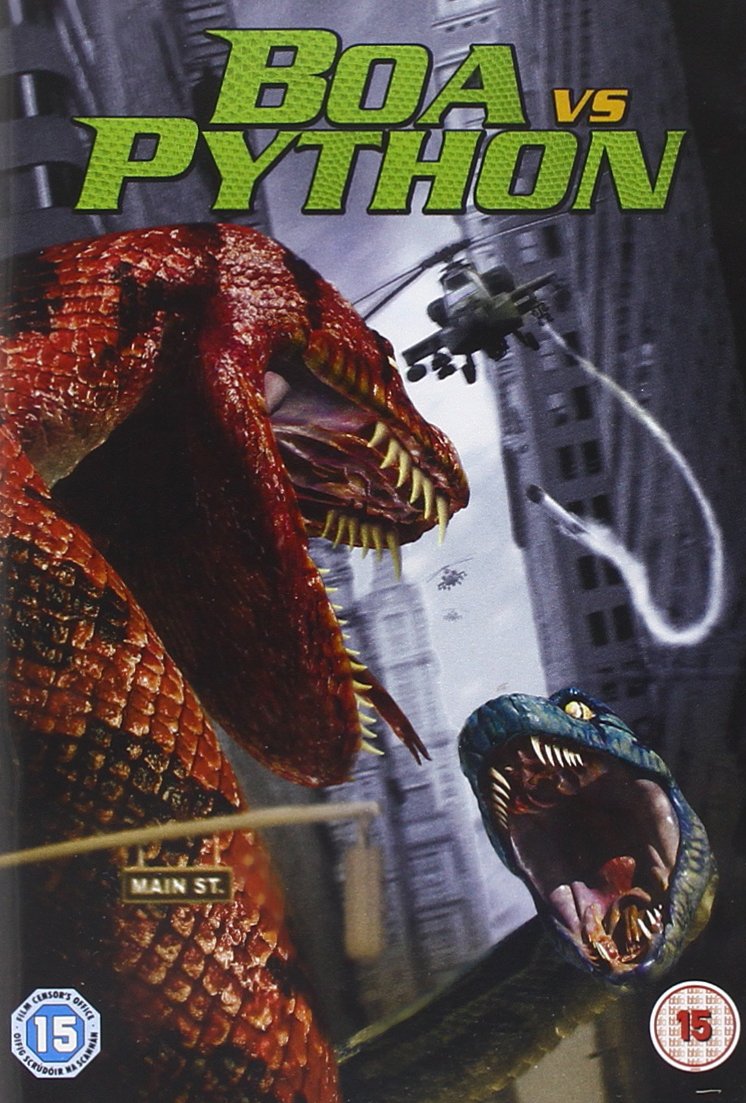 Two masked wrestlers, one named “Boa” the other “Python”, are grappling. Enjoying this spectacle is multi-millionaire casino owner Broddick (Adam Kendrick) and his girlfriend Eve (Angel Boris). Their night out is interrupted by a phone call. We cut to see the man making the call, Ramon. He informs Broddick that his “package” has arrived and is being delivered. Broddick is delighted and promises lucrative compensation to Ramon for his work. As they drive, something goes wrong; whatever it is that is sealed inside the back of the truck has woken up and has become enraged. The convoy stops. Ramon gets a tranquilizer gun and orders a panel to be opened. Unfortunately, a serpentine tail smashes through the panel and begins to wreak havoc. One of the men is startled and fires his gun, accidentally hitting the main control circuit on the back of the truck. The main door of the sealed container opens, and an abnormally large nightmarish reticulated python, about 80 feet in length, emerges and kills the group, but not before Ramon manages to detonate a bomb, destroying the convoy, but not the snake.

Broddick reveals his plan to bring extreme big-game hunting to the city, as yet another pastime for the mega-wealthy, and the python is to be the quarry. While in a sexual tryst with his girlfriend Eve, Broddick sees a news report detailing the destruction of Ramon’s convoy. Now realizing the python has escaped, Broddick decides to bring his big-game hunting associates to their prey. FBI Agent Sharpe (Kirk B.R. Woller) investigates the wrecked convoy and discovers a large snake scale on the wreckage. Quickly realizing what he is up against (Agent Sharpe is familiar with the events in the film Python), Sharpe is determined to prevent the python from killing more people. He enlists herpetologist Dr. Emmett (David Hewlett) and marine biologist Monica Bonds (Jaime Bergman) to come up with a plan to stop the python. They plan to merge Monica’s dolphin-camera headgear and tracking system to Dr. Emmett’s giant 70 foot, genetically enhanced Scarlet Boa named Betty. They hope Betty will seek out and kill the python. The trio, now joined by a backup team of FBI agents and soldiers, transport Betty to the water treatment facility. She quickly enters and begins to track the python. The tracking system proves faulty, providing only sporadic coverage.

Broddick and his surviving hunters, enter the opposite end of the treatment facility and begin to track the reptile. They are surprised when they stumble upon a nest of eggs, guarded by Betty, whom they had not expected to see. Betty constricts Eve and squeezes the life out of her, killing her, causing Broddick to snap. Eventually, he makes his way out (the rest of his team are killed by both Betty and the python) and finally meets up with Dr. Emmett and Monica. The python devours the eggs, enraging Betty, and the two snakes finally begin their epic battle. Broddick is taken into custody. The tracking system starts to function again and Dr. Emmett finally sees Betty’s nest. He decides to go back into the treatment facility to save the nest. Monica goes with him. Broddick however has sneaked away and commandeered an APC. Dr. Emmett and Monica, using the tracking system, track Betty to underneath a nightclub. Betty smashes through the floor, as does the giant Python. The two snakes grab him and, in a vicious and bloody tug-of-war, rip him in half, each devouring the other half. The two snakes continue their battle underneath the disco with Dr. Emmett and Monica hot on their trail.

The battling snakes end up fighting on subway tracks. Betty, losing badly, is saved by Dr. Emmett, who activates an electrical spike device he implanted into her head. The shock throws her off the subway tracks just as a speeding bullet train slams into the python and beheads the beast. Dr. Emmett and Monica celebrate the death of the python, but become concerned when it is revealed Betty has crawled away. The duo head back into the treatment facility to bring Betty and her remaining eggs home.

it’s a creature feature, so yes, it is going to be far fetched, zoologically inaccurate and yes, the bad guys are going to get eaten. The two leads have some good chemistry going, there are a few funny moments, and the snakes are suitably huge, and the whole thing zips along at a reasonable pace. What more do you really want from a creature feature.