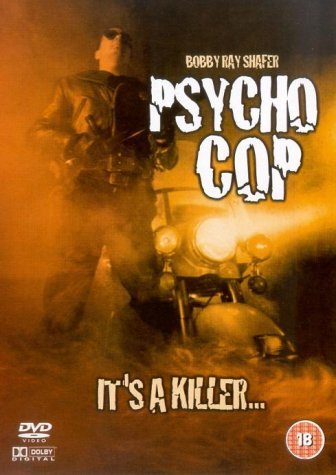 I guess there was a trend in the late 80s of making horrible movies. The film industry was booming, and in order for movies like Jaws to do good, movies like Psycho Cop had to be made. This movie is devoid of any thread of invested time. It seems like the writer/director (Wallace Potts) thought of the idea, wrote it, and filmed it all in the same weekend. For this reason, it is hilarious! This ‘horror’ film is the funniest of it’s genre. All because they were seriously trying to make a good movie. They thought they were doing a good job, and that’s why it’s funny. All through our history, humor has come from failure…and this movie is the epitome of that philosophy.

In the basic common sense, logic and continuity departments, this movie scores a 0 out of 10. Scenes magically switch from day to night, cans of soup go missing and cause more alarm than friends going missing, and – although there’s no nudity – characters bathe together for unknown reasons. The killer is a cop who goes psycho – this shown in the opening sequence by him washing his hands in blood, presumably that of the innocent – and one by one he slaughters all of the stereotypical teens who ‘just want to party’.

I could write a novel on the Psycho Cop experience,  It really is worth the money if you can find it online. it’s so bad it’s good.