In an alternate universe where evil usually triumphs over good and where the roles of the heroes and villains are reversed from their counterparts in the mainstream DC Universe, heroic analogues of Lex Luthor and the Joker (called the Jester) are attempting to steal a device, the “Quantum Trigger”, from the headquarters of the Crime Syndicate. The pair trip an alarm but manage to secure the device. The Jester sacrifices himself to allow Luthor to escape and kills J’edd J’arkus and Angelique (alternate versions of Martian Manhunter and Hawkgirl respectively) with a radioactive bomb. Luthor is confronted by the remaining Syndicate members (Ultraman, Superwoman, Power Ring, Johnny Quick and Owlman) but escapes to the Earth of the heroic Justice League by activating a dimensional travel device.

Luthor locates a police station and is mistaken for the evil Luthor where he ends up strip-searched. The Justice League is summoned and Superman’s x-ray vision confirms Luthor’s reversed organs indicate that he is from a parallel Earth and that the evil Luthor is still incarcerated at Stryker’s Island. The Justice League take the alternate Luthor to the Watchtower, where they learn of the Syndicate threat. As the Justice League debates the matter, Luthor hides the Quantum Trigger on the satellite. With the exception of Batman, the rest of the Justice League (Superman, Wonder Woman, Green Lantern, Flash and Martian Manhunter) travel to Luthor’s Earth. Arriving at the parallel Justice League’s base, the heroes begin to attack Syndicate targets. After a successful series of raids in which they capture Ultraman, the League confront United States President Slade Wilson, who releases Ultraman and explains that acceding to the Syndicate’s demands saves millions of lives. His daughter, Rose, however, regards him as a coward. Martian Manhunter inadvertently reads her mind and explains that as a military man her father actually holds life more dear than others. Martian Manhunter foils an assassination attempt on Rose and the pair fall in love.

Owlman constructs a weapon, the Quantum Eigenstate Device or Q.E.D., which the Syndicate intend to use as the equalizer to the threat of a nuclear reprisal. When pressed by Superwoman, Owlman admits the weapon can destroy entire worlds. Believing there are many parallel Earths, and that each one develops from the choices that each person makes, Owlman becomes obsessed with the idea that nothing he does can possibly matter, as there will always be parallel worlds where he explored another option. As a result, he begins fervently seeking Earth-Prime, the very first Earth from which all other universes originated, intending to use the Q.E.D. to destroy it and spark a chain reaction that would erase the entire multiverse, as it is the only action that would not result in the creation of another universe. He then sends Superwoman with three of her lieutenants to the League’s dimension, and on the Watchtower they battle Batman, Aquaman, Black Canary, Black Lightning, Firestorm, and Red Tornado. Superwoman and one of her lieutenants escape with the Quantum Trigger, but are followed by Batman.

Batman tricks and defeats Superwoman, and summons the League. J’onn and Rose bond, and Rose decides to learn the location of the Syndicate base to allow the Justice League to confront them. The League arrive at the Crime Syndicate’s moon-base with the captive Superwoman, and eventually battle the Syndicate. Owlman fights off Batman and takes the Q.E.D. bomb to Earth-Prime, finding it to be uninhabited and lifeless, having suffered an unknown cataclysm that caused it to leave solar orbit. Luthor speculates that a speedster might be able to vibrate and match the temporal vibration of the teleported Q.E.D. device and open a portal. Flash volunteers but Batman states that he isn’t fast enough, only Johnny Quick is. Johnny agrees and opens a portal.

Batman pursues Owlman to Earth-Prime and defeats him. He then teleports Owlman and the Q.E.D. device to another lifeless, uninhabited Earth. Although Owlman is able to abort the countdown and save himself, he realizes an alternate version of himself would make the opposite choice regardless, stating “It doesn’t matter.”, and allows the bomb to detonate and destroy that alternate Earth, killing himself in the process. Batman returns to discover that the strain of acting as a vibratory conduit has aged Johnny Quick to near death. Before dying, Johnny correctly deduces that Batman had lied about Flash not being fast enough and knew what would happen to him. Despite this, he shows no ill will toward Batman, dying with a smile. Martian Manhunter returns, accompanied by President Wilson and the U.S. Marines, and together they arrest Ultraman, Superwoman, and Power Ring. Wilson thanks the heroes, and although Rose asks Martian Manhunter to remain with her, the group return to their dimension. Batman and Superman later discuss a membership drive, with the five heroes summoned previously greeting the League. 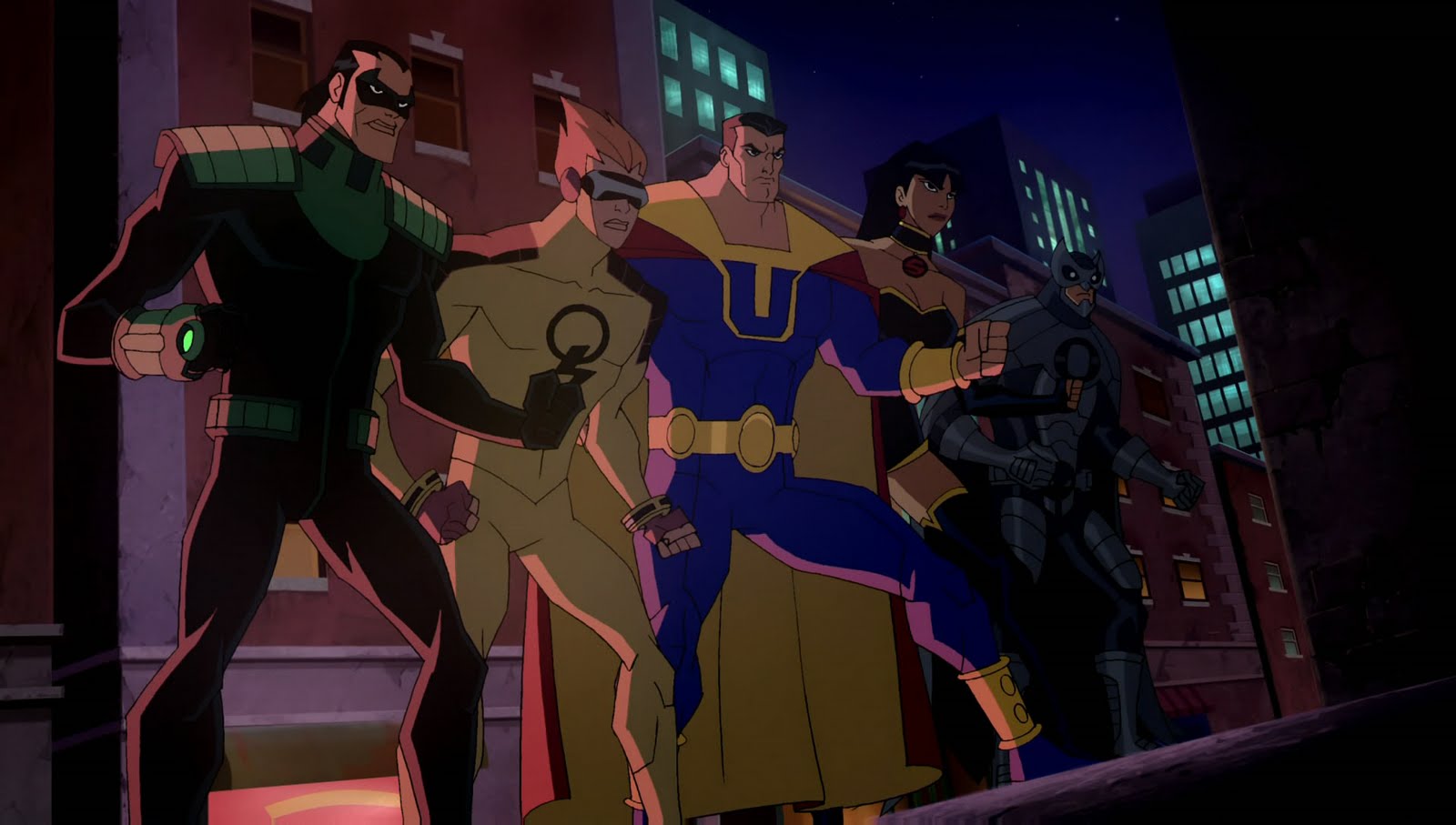 This movie is smart, interesting, and grabs you from the get-go. The action is top notch, the animation is ultra sweet, and if these direct-to-video DC Universe movies have proven anything, it’s that they know how to make a good Justice League flick.