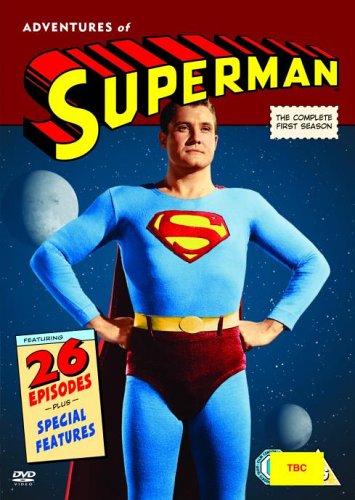 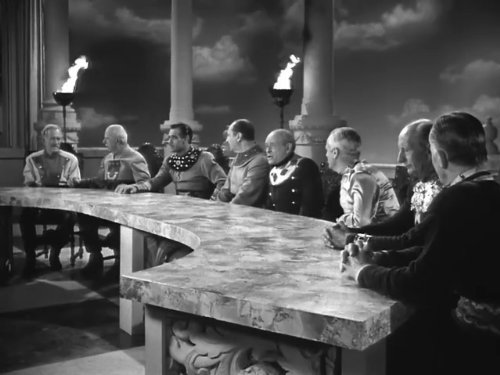 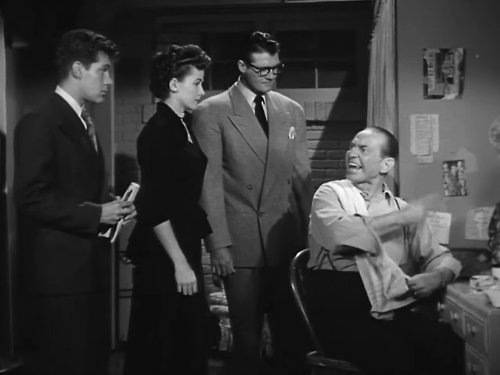 Just the mention of the Superman television show always brings out a smile; for 1950s kids this program was nothing but good memories. Shuster and Siegel’s Superman started as a comic book character and soon developed into an icon representing everything good and noble … sort of a folk god for the 20th century. By the post-war years the world was in a real muddle, yet for little kids Superman was a reassuring beacon of light, morally decent and vigilant without being a vigilante. Just the sound of George Reeves’ voice stirs something in a 50s kid; the brassy Superman anthem brought us to our feet and running for the TV set. 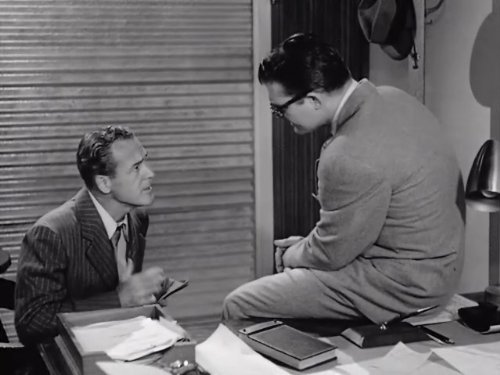 This first season has an unfamiliar but good Lois Lane in Phyllis Coates and plays much more like a crime serial than the later color seasons. Warners has assembled a trim multi-disc package and included some great extras. The disc set tells the whole tale of Superman on television. According to New Wave’s making-of interview documentary, producer Robert Maxwell filmed Superman and the Mole Men with the cast and crew planned for his TV show. It was released by Lippert films and was a moderate success; Daily Variety’s review called the film “sock moppet bait.” Then Maxwell had to film the entire first season — 26 episodes — before landing a network spot. Copyrighted in 1951 and ’52, the show didn’t premiere until 1953.

As pointed out in the docu, Adventures of Superman was more crime-oriented than science fiction. Some episodes feature strange inventions, as with a mind-control device in The Mind Machine. More often than not Lois or Jimmy Olsen is held by despicable gangsters, a problem solved when the news finally reaches Clark Kent. He leaps into a ‘storeroom’ and zooms off to the rescue. That stirring anthem blasts in along with a flying sound effect that reminds us of Dorothy Gale’s tornado. Crook confrontations usually include a demonstration of Superman’s invulnerability in the form of a bent knife or “bullets have no effect” scene (no animated bullet ricochets yet). Our hero often trades blows with the bad guys, who fall as if kayoed by your average serial hero. The way Reeves throws the punches we expect to see their heads come off! 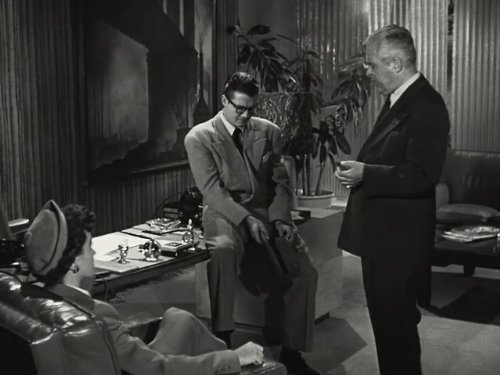 Phyllis Coates is a spunky Lois Lane. She takes no guff from anyone and also tries her hand at beating up on bad guys. She comes off as essentially humorless, with only a few wonderings why she’s never seen Kent and Superman together. The jokes are all reserved for Reeves and his literally closeted alter ego. The ‘mild mannered’ Clark Kent is forever smiling and seems to derive plenty of satisfaction from knowing a secret nobody else does. Capable actor Jack Larson plays Jimmy Olsen as an immature clown with a good heart. Forever clueless, he can be depended on to ask the dumb questions so that Clark Kent can dispense plot exposition. Several episodes center on Olsen’s personal adventures, which play like Hardy Boys stories featuring one rather dense Hardy Boy.

Production values are on the dire side but they were generous for Televsion in 1952. It’s not unusual to see characters throw bold shadows onto sagging theatrical backdrops.  The minimal effects range from “okay” to “so-so” to “what the heck was that?” Reeves is good on the springboard launches and gymnastic one-point landings. Some flying shots are acceptable but a lot of others simply matte a sideways image of a standing Reeves into whatever background is handy, and look like embarrassing mistakes. When one makes 26 TV episodes on spec there is no room for second tries, let alone R&D. There are some questionable plot points as well. The docu extra covers an amazing blunder in an episode in which two crooks find out Clark Kent’s secret identity. Superman parks them on a high mountain while he sorts out the rest of the plot, telling them to stay put ’til he gets back. They try to climb down instead, and fall … to their deaths! The show offers nothing more about them – they’re just forgotten!

The first episode is called Superman On Earth and covers the familiar ground shown in the first act of the Richard Donner / Christopher Reeve 1978 effort … on 1/1000th the budget. Krypton is one throne room and Jor-El’s lab and it’s all pretty perfunctory, but the cornball drama still tugs on the heartstrings when old Mrs. Kent finds the baby in the rocket. Events are rushed through so quickly that young Clark Kent has time to grow up (“Gee, why do I have to be different from everybody else?”), come to Metropolis, get hired and rescue a man clinging to the underside of a blimp all in 25 minutes. Don’t ask. It’s all quite charming.

The TV show reprises Superman and the Mole Men as a first season ender, breaking it into two parts.  The feature takes an interesting liberal point of view, with an anti-vigilante civics lesson. The Mole Men are midgets from the center of the Earth that show up and are immediately judged by some irate townspeople (including blacklistee-to-be Jeff Corey) as hostiles to be eradicated. Superman’s only role in the movie is to defend the American Way, which in this case includes protecting innocent aliens from paranoid, trigger-happy yahoos. With that sensitivity, it’s suprising that so little is made of the fact that Kal-El himself is an alien immigrant to the United States. He’s from another galaxy, yet he appreciates our freedoms. I guess he has to count himself lucky that he was in human form, specifically Anglo human form. Superman may be corny, but its sentiments ring true … he’s a hero championing values we still cherish, theoretical though they may be.

Mild-mannered reporter Clark Kent and Lois Lane are sent to the small town of Silsby for the inauguration of the world’s deepest oil well. Unbeknownst to the drillers, however, the drill shaft has penetrated the underground home of the “Mole Men”, a race of small, furry (though bald-headed) beings. The Mole Men come up through the shaft at night to explore the surface. When the creatures first emerge from the shaft, their sudden appearance scares the elderly night watchman to death. Lois Lane and Clark Kent soon arrive at the oil well and find the dead watchman. Subsequently, help arrives and while Clark Kent and the foreman are exploring the surrounding area for signs of intruders; Lois sees one of the creatures and screams in terror. But, no one believes her when she tells them what she saw.  After the medical examiner who was summoned to the scene leaves with Lois, Clark stays behind to confront the foreman. The foreman confesses that the well was closed down for fear that they had struck radium and not oil. The foreman proceeds to show Clark ore samples that were collected during different stages of drilling; all of these glow brightly.  Their peculiar appearance, plus the fact that everything they touch then becomes phosphorescent and glows in the dark combined with the creatures being spotted by several townspeople, scares the townspeople into forming an angry mob, led by the violent Luke Benson, in order to kill the “monsters”. Superman is the only one able to resolve the conflict, saving one of the creatures from falling into the town’s water supply after he has been shot by taking him to hospital, while the other is chased away.

Later a doctor reveals that unless the creature undergoes surgery to remove the bullet, he will die. Clark Kent is forced to assist the doctor when the nurse refuses to out of fear of the creature. Soon afterward, Benson’s mob shows up at the hospital demanding to have the creature turned over to them, leading Superman to stand guard outside the hospital. Lois Lane stands at Superman’s side, until a shot is fired from the mob narrowly missing Lois. Superman sends her inside and begins to relieve the mob of their guns, sending the mob away. Later three more mole creatures emerge from the drill shaft, this time bearing a weapon. They make their way to the hospital. Benson and his mob see the creatures and Benson goes after them alone, but when the creatures see him they use their weapon and fire on him. Superman sees this and quickly jumps in front of the blast, saving Benson’s life, which Superman says is “More than you deserve!”.

He fetches the wounded creature and returns him and his companions to the shaft. Soon after they destroy the shaft completely, making certain that no one or thing can come up or go down it ever again. Lois observes, “It’s almost as if they were saying, You live your lives….and we’ll live ours”. The film is a little unevenly paced. Although the Molemen are interesting, a bit creepy, and nicely portrayed, there are several Corman-esquire scenes which spend too much time redundantly showing us their odd behavior. The script is intelligent and economical. By today’s standards, the costuming is poor to fair, but for its time, this film’s special effects and costuming were quite good. The cinematography is also generally very good, and the acting is much better than one might expect. I was particularly impressed with Reeves, Jeff Corey and Walter Reed.