2077, twenty years after an earthquake has sent all the states along the western American seaboard into the ocean. The populace is divided between monied classes living inside domed cities and the poor and mutated in the wastelands outside. In Phoenix City, bounty hunter Jack Ford receives an assignment from a corporation to track down four female pleasure androids that have been stolen from a colony on Jupiter. Jack is reluctantly paired with cybernetic specialist Beth Enright who has never been outside the city before. The two follow a trail that leads through the seedy wasteland underworld to an operation smuggling vice into the morally pure underwater city of New Angeles.

Fred Olen Ray is a director who has carved out a unique niche for himself. He makes B movies – a great many of them, nearly 200 at current count. All of his s films steal their ideas from better, bigger-budgeted mainstream films – Phoenix 2 is his take on Blade Runner.

Phoenix 2  is one of Fred Olen Ray’s better efforts. The film is cheaply made – the underwater city, for example, never consists of anything more than scenes shot in the basement corridors of some industrial plant. There are some capable cut-price model effects from the New World studios in-house effects group. There is the usual collection of Olen Ray bimbos – including Scream Queen Brinke Stevens and softcore actress Lorissa McComas. What makes Phoenix 2 enjoyable is Fred Olen Ray’s clear sense of humour. The sparring relationship between Marc Singer’s worldwise bounty hunter and Rochelle Swanson’s city slicker is well drawn out. Not to mention the pleasure droids who are always stripping their clothes off and trying to pleasure their men at the most inappropriate of times – in one amusing scene, they are dressed as nuns trying to tempt Matthias Hues while he is trying to fly a ship. There is also a drolly amusing scene where Marc Singer bursts into a brothel, interrupting a couple during sex to scan her to see if she is an android and before departing pulls out a photo of the woman he was searching for earlier, “By the way your husband’s looking for you.”. It’s a cheap Sci-Fi film that has nothing to do with the previous Phioenix film, but still a silly enjoyable saturday night film for when nothings on TV. 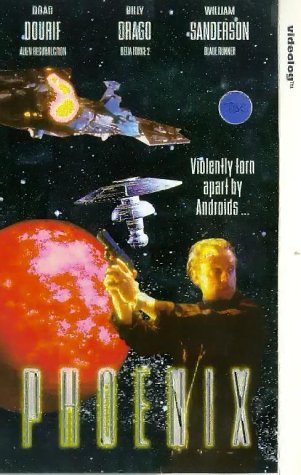 On the mining planet of Titus 4, the control station is attacked by rebellious androids under the control of their leader Miro. The head of the Rydell Mining Corporation sends for his top agent Tyler McClain, currently in gaol with his team for disobeying orders. Despite his protests McClain is put under the control of Reiger (Brad Dourif), the man he rebelled against, and the team fly out to Titus 4 where McClain is captured by the androids who explain to him that they are not the enemy and that the mysterious minerals on the planet are causing their semi-organic brains to shed their programming and become fully sentient.

Phoenix is one of that great myriad of low budget, unassuming sci-fi films that crop up on suspiciously cheap DVDs or late night on obscure movie channels – the sort you only find after scrolling past all of the normal movie channels. These films can be split into two categories, the always entertaining exploitation films and the far more hit and miss variety that try and convey a serious storyline.

Unfortunately Phoenix is firmly located in the latter category and is certainly more miss than hit, but does have a few interesting ideas. The plot is well thought through and provides an interesting explaination to the usual ‘androids gone rogue’ theme that does deserved to be explored more deeply, a few interesting twists keep things moving and the film boasts a decent if not particularly surprising ending. Unfortunately the rest of the storyline follows the determinedly cliché ‘rebellious military group released from gaol for a deadly mission’ pattern and certainly in its middle chapters the pacing seems completely non-existent, lifted only by a gratuitous sex scene.

Production is clearly where the project’s low budget has struck and while solid if uninspired camerawork and editing keep the film a step above a student movie project, the sets all look distinctly impoverished while the scenes on the mining planet are filmed entirely in a boiler room the CGI looks like a very dated video game, although fortunately it is used only very sparingly.

A few good ideas and some surprisingly good acting talent are dragged down by the lackluster pacing and a low budget that clearly shows on-screen. Worth a watch if you stumble across it, but not worth tracking down.