In the first two minutes, you’ll have an idea whether Shortbus is your cup of tea. After 6:17, you’ll know for sure, as there are several scenes of hardcore sex, complete with penetration and visible happy endings, as the main characters are introduced via their carnality. It might be the most graphically sexual the film gets, but there’s plenty more coupling to come, so you know where you’re headed right off the bat. It’s up to you if you want to take that trip. 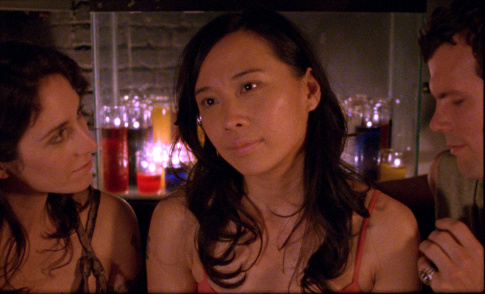 Of course, intercourse is a big part of the story, and if there’s a way for one, two or three people to have it, you’ll find it at Shortbus. You’ll also find some stimulating conversation and some very lonely people. The film may celebrate sexuality, but it’s not pretending that it’s a panacea for the problems people have. In fact, it seems that sex is Sofia’s main problem, and it’s certainly not helping James or Mistress Severin achieve happiness. But that’s easy to forget when you watch people who are obviously enjoying each other’s company.

The main storylines are the easiest to fall for, as each character is likeable, with a healthy sense of humor and faults you can identify with. You’ll have to save some of your empathy though, as there are plenty of side stories that will grab your attention throughout, like a former mayor guilt-ridden over his reaction to AIDS while in the closet, or a young man obsessed with the relationship between James and Jamie. Incredibly, the film manages to take these little tangents into philosophy and sex, only to make them strands in the larger web of a story. That’s the kind of skill that writer/director John Cameron Mitchell has displayed once again, creating a fantasy world that’s achingly real, with gorgeous style, witty dialogue (like a quick line about whether you should smile when being photographed at Ground Zero) and well-defined characters (as well as a gorgeously creative, animated New York that is surprisingly not a model, but a digital rendering.) It’s a peek inside of a world of sexual freedom that few people ever experience, and an inviting one at that, if you’ve got a grip on the whole explicit sexuality thing. Bond might describe the film best when he watches his patrons fornicate, and says “It’s just like the ’60s…with less hope.” Less hope, yes, but more truthfulness and a lot more heart than anyone could ever expect for a movie most know for it sexual content.