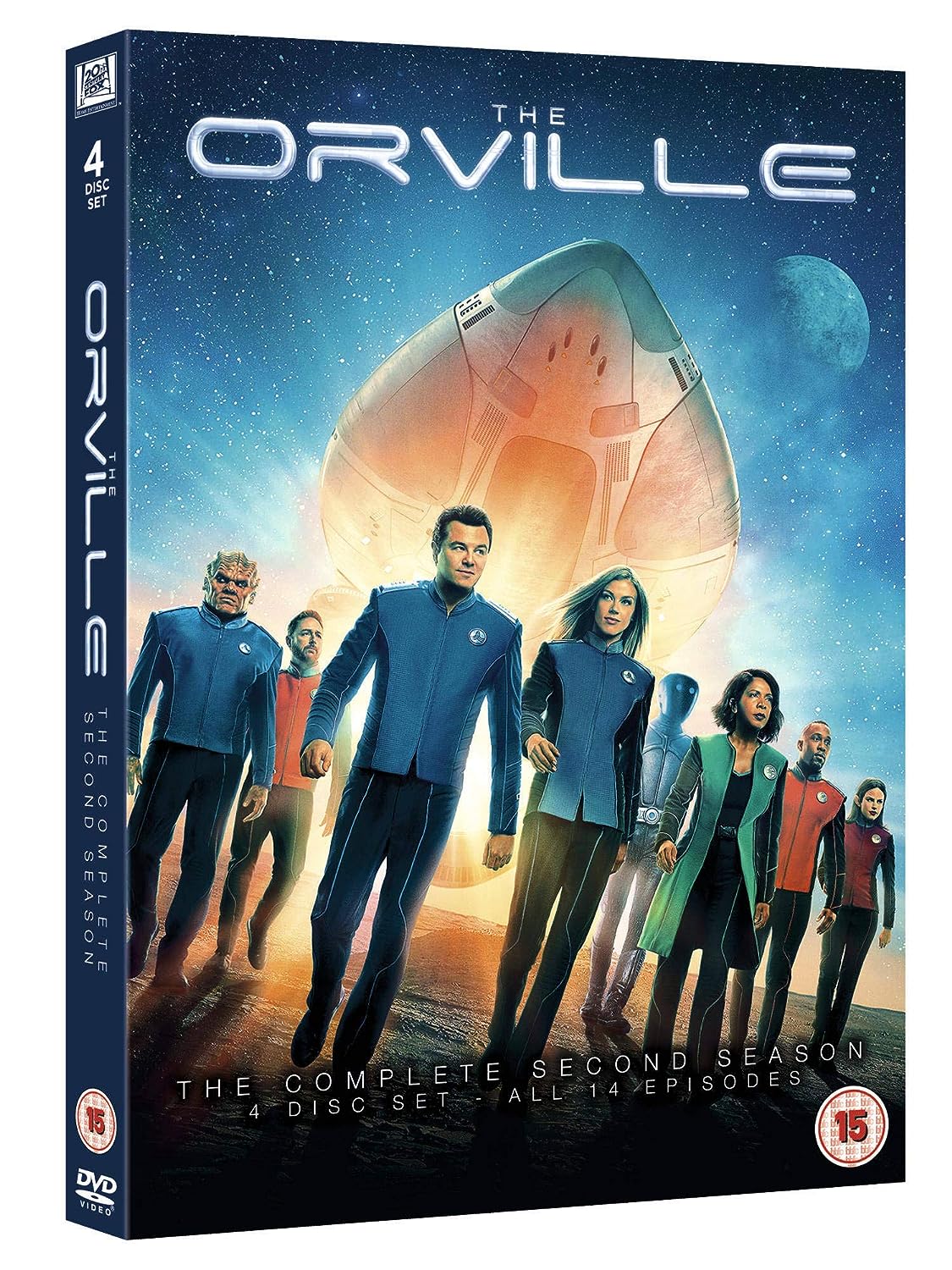 It would be profoundly unfair at this point to keep comparing The Orville to Star Trek: The Next Generation. But the parallels are pretty obvious. The titular Orville has the same ‘Giant Conference Hotel’ in space look that the old Star Trek show did; the Union has a similar aesthetic as The Federation, and so on. But all of this is shorthand; we know Star Trek, so all the visual clues are really just there to quickly get the viewer up to speed.Season 1 of The Orville worked pretty hard to establish its own world. This was an optimistic yet militaristic future in which people still behaved like people. They got drunk, they made dirty jokes, they had affairs, they got divorced. The central relationship of the show is that the First Officer is the Captain’s ex-wife, after all. Season 1 had a lot of missteps and frequently fell flat. Season 2 addresses these issues by simply being more straight forward and blunt.For a start, it’s more obvious that the various prominent alien races in the show represent various social issues. Stories that feature the ‘All-Male’ Moclus tend to focus on sex, identity, and gender. It helps a lot that Peter Macon plays the role of Bortus brilliantly. He can switch from sombre and serious to physical comedy extremely well and is perhaps one of the most under-rated characters in the show. The war-like Krill allow the show to reflect on religious intolerance and the mechanical Kaylon serve a general cypher for the human experience. None of these ‘issue’ stories are subtle, but they are fun and filled with humour.The show’s twists and turns are also pretty significant, and from the outset there are plenty of them. The Orville isn’t afraid to use story arcs, and the ‘reset’ button is rarely used here. Mistakes and tragedies are permanent. Certainly the last few episodes of the series feel like a promise. The past is another country and that even the slightest thing can have ruinous consequences.The special effects budget has also gotten a significant bump. Though there are plenty of ‘people standing around talking’-type scenes, when the action gets underway it really does go for it, reminding the viewer that this show is versatile enough to do both action and drama very well. 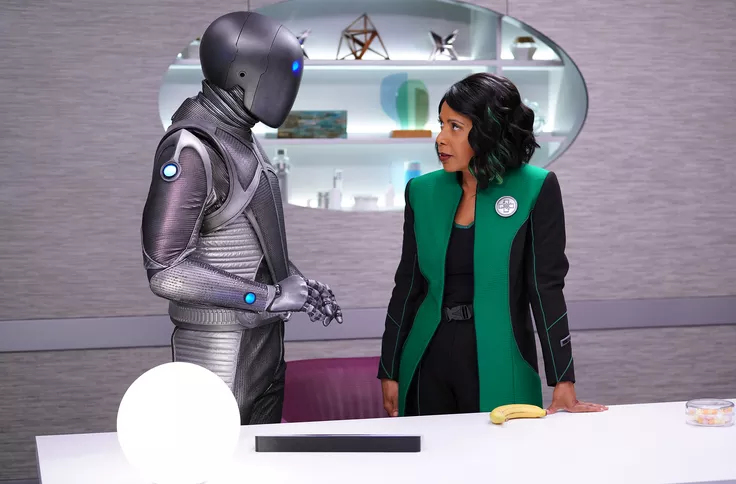 Despite the short second season, it seems that Fox is very fond of its very marketable sci-fi show. Season 2 is occasionally a bumpy ride for its changes in story and pacing, but it’s well worth the journey. 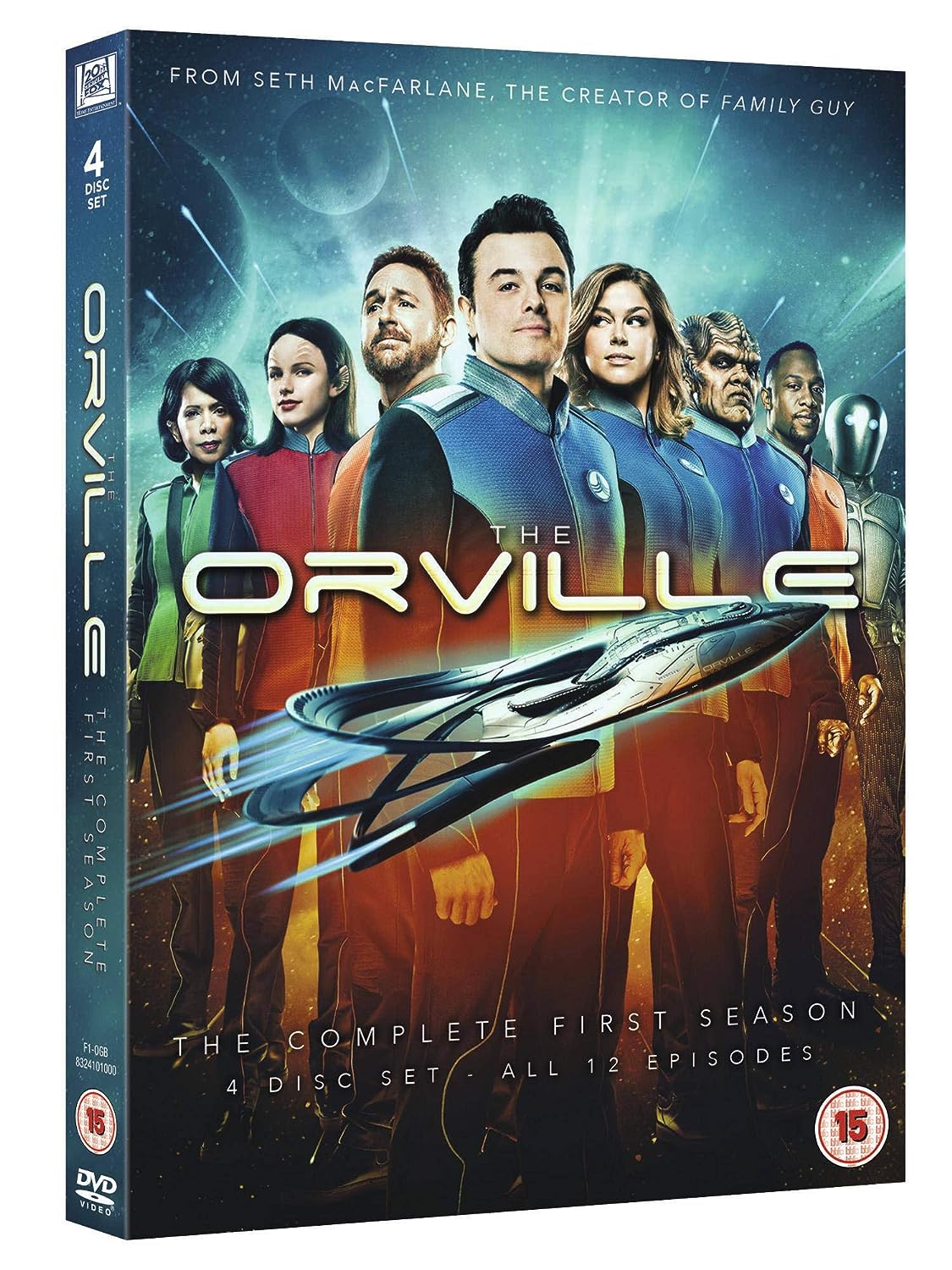 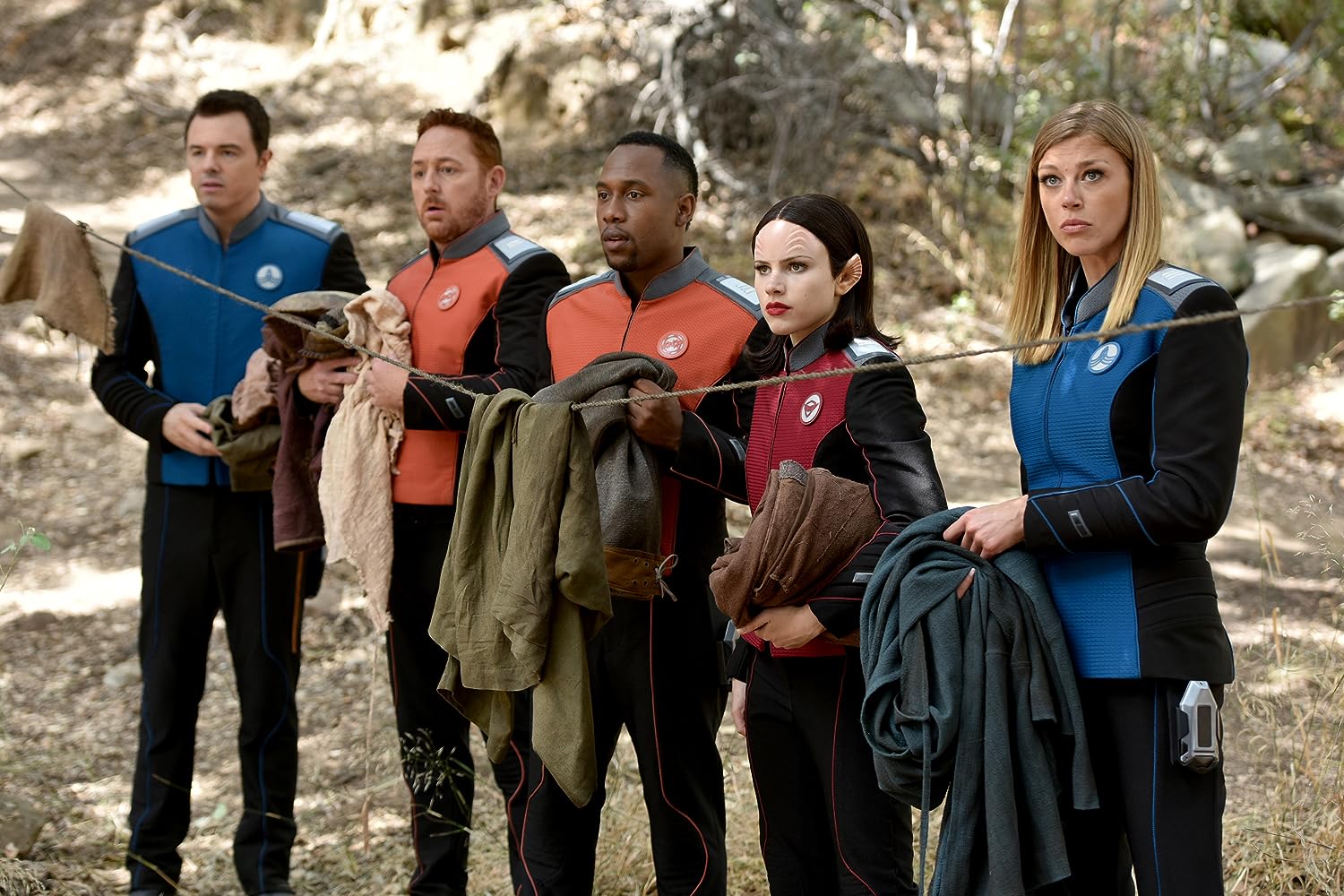 When we first heard the news that Seth Macfarlane (Family Guy, Ted, A Million Ways to Die in the West) was making a comedy homage to Star Trek we thought hell yeah. It didn’t take long however before we started thinking it would just be another Family Guy-styled series with cheesy “adult” jokes, something that many people thought would be the case. Now that we’ve seen the first season, I can happily say that this is one of his finest works. It’s hilarious and pays tribute to the classic sci-fi series perfectly.Seth Macfarlane plays Ed Mercer, an up and coming officer in the Planetary Union who has recently separated from his wife after finding her in bed with a blue alien. Shortly after these events, he is given a chance to prove himself after being given the Captain’s chair of The Orville, a mid-level exploratory vessel. 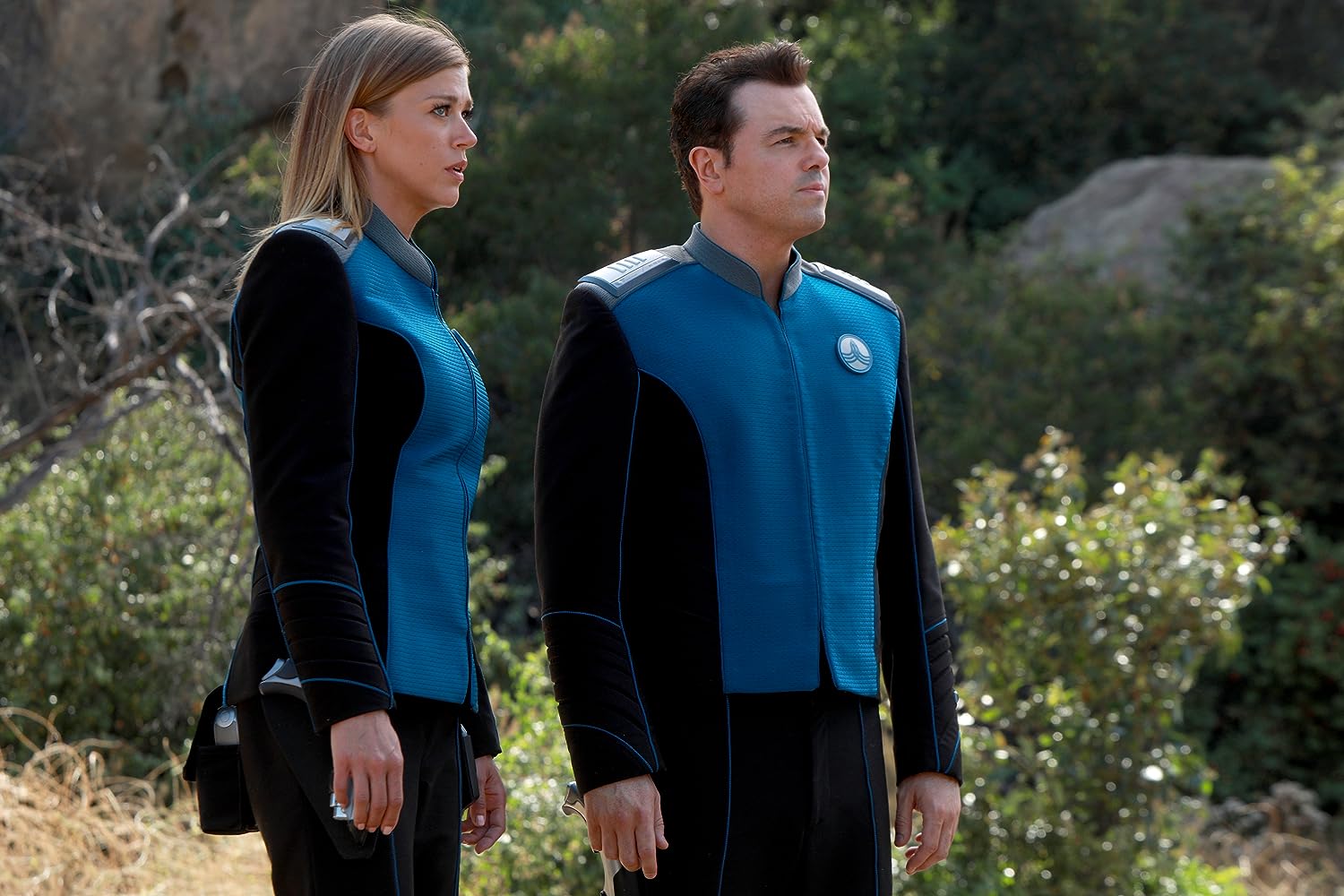 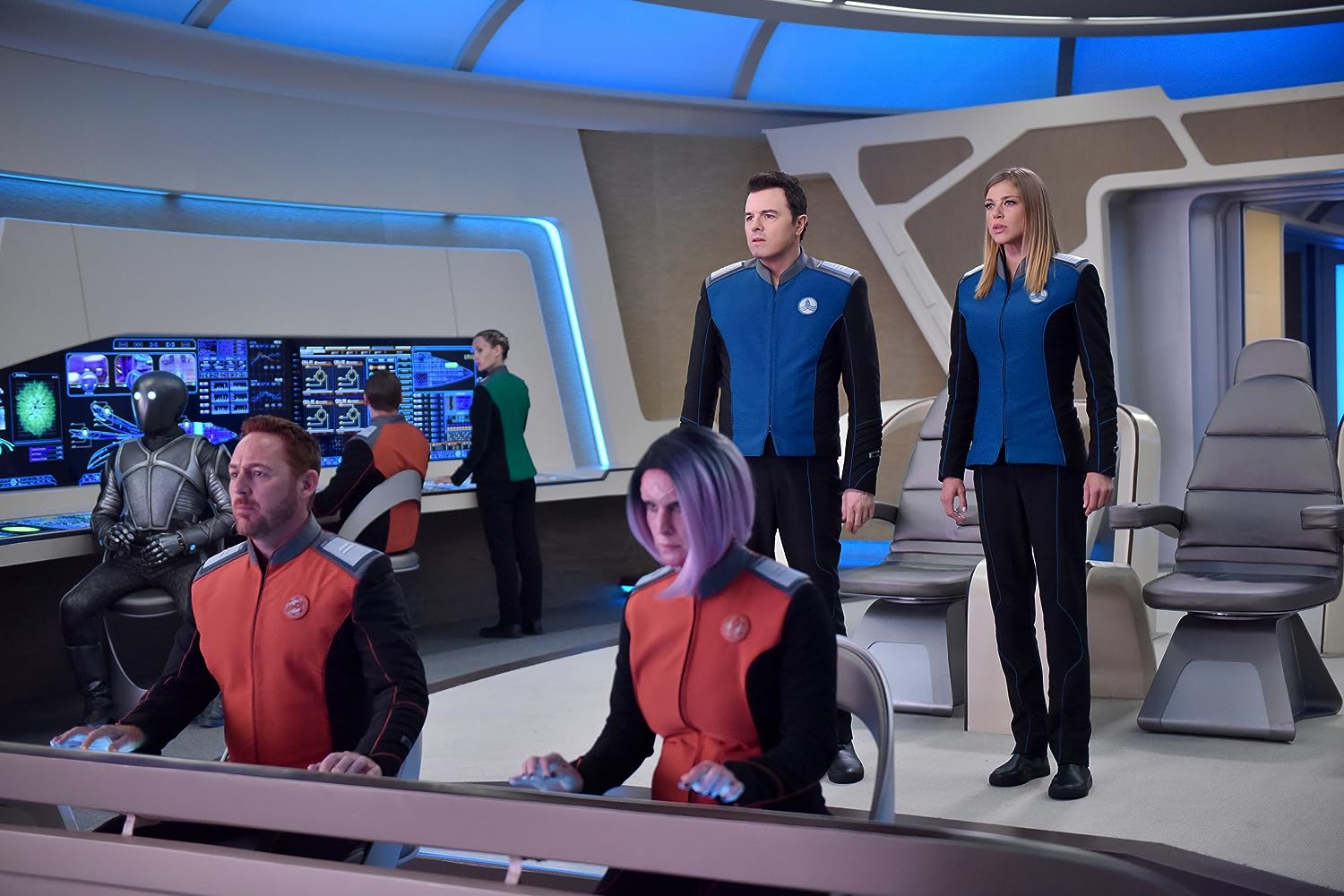 The crew is missing a first officer and the Officers of the Planetary Union chose to place Adrianne Palicki (John Wick, Agents of S.H.I.E.L.D, Red Dawn) who plays First Officer Kelly Grayson in the role. The only problem is that she’s Captain Mercer’s ex-wife. 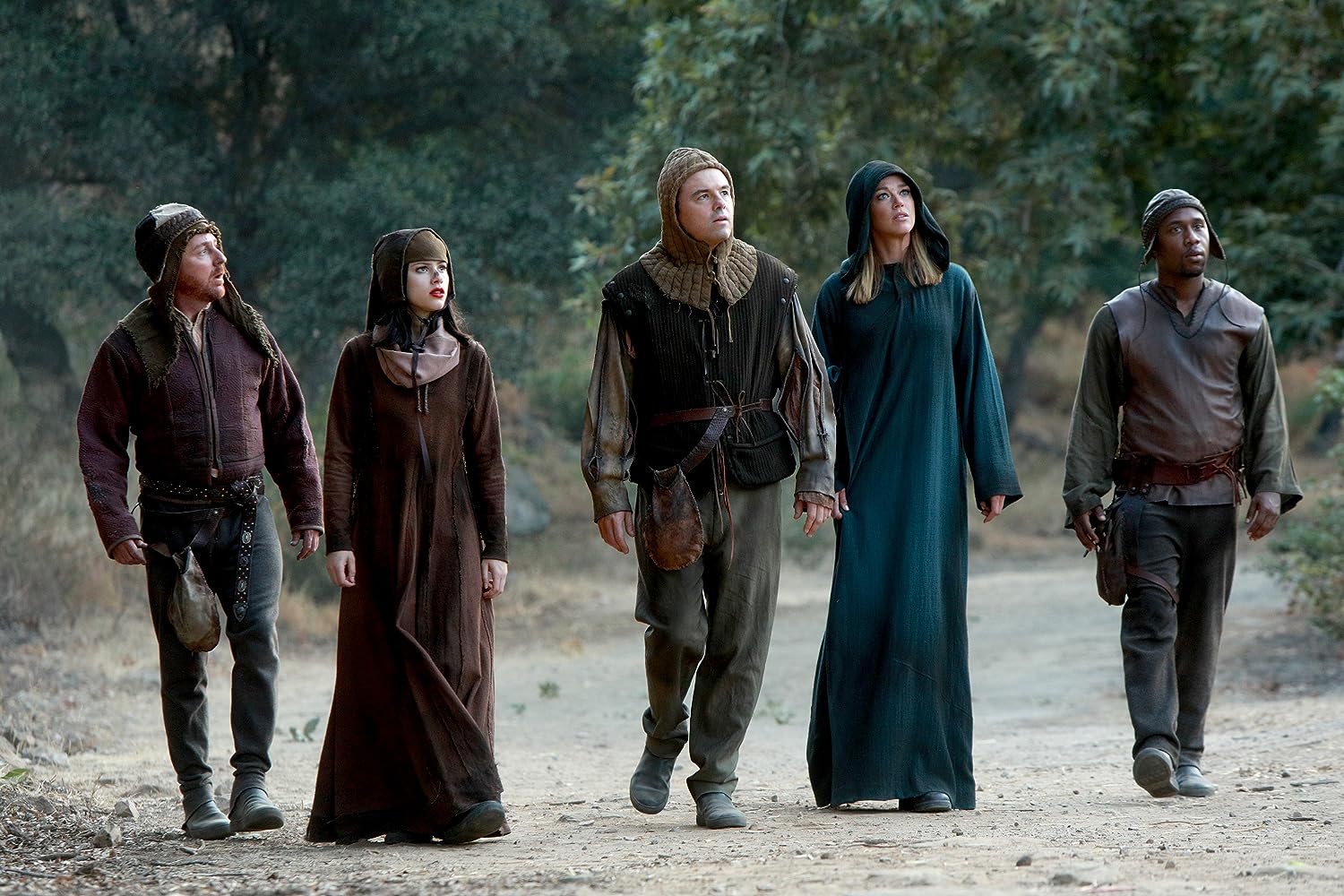 Whilst this sounds like your typical cheesy sit-com scenario, and it is, this is one of those rare occasions where it just works. The casting in this series is brilliant and the characters play off each other so well that every now and again you forget that this is a homage and actually start to believe that this is a new Star Trek series. The interactions between Mercer and Grayson are first class and the comedy stoic nature of Bortus is inspired. There are also several brilliant interactions between Dr Finn and her long-time admirer, a gelatinous blob named Yaphit, as he tries to seduce her at every opportunity.The Orville tackles some fantastic issues, worthy of any Next Generation episode. From discovering a massive ship floating In space that houses a holographic world that the inhabitants don’t realise isn’t real to getting trapped on a planet ruled by social media where everyday justice is dished out in popularity points which are displayed live on peoples clothing. The latter is probably the best episode of the series and tackles some very real subject matter involving the current state of social media, public opinion and controlled media based on distraction and frivolity and proves The Orville can be both both funny and intelligent at the same time.

I can’t recommend this series enough so you should probably go now and watch it immediately. Oh, and as an added bonus it has been renewed for a second season so it won’t just be a flash in the pan one-off either, which is great news. Essentially if you love comedy and you love Sci-Fi then you can’t go wrong with The Orville!

Compared to recent surge of sci-fi series, Minority Report is looking more refined with clearly better production. However, this doesn’t have the same thrilling spirit from Tom Cruise’s action thriller. The precognition concept has been reduced to typical paranormal investigation.

If you’re not familiar with the source, or understandably forget the story, the show opens with brief narrative about the movie. In near future authority used precog system by plugging three siblings into a machine, a mix between psychic and technology to determine crime before it happened. Unfortunately, Tom Cruise proved that it had flaws and the project was scratched.

One of the siblings, Dash (Stark Sands) now leads a normal witness protection life, but he still has the clairvoyance gift. With the help of a female police officer Lara Vega (Meagan Good) he helps solve crime in a rather timid sci-fi crime drama. The cast is leaning towards light comedy than thriller, which is perhaps intentionally made to suit the series.

The problem is the two leads don’t mesh together well. Stark Sands has the quirky savant look, but he doesn’t possess the on-screen presence for a capable lead.  Meagan Good is attractive for the lead female, but she’s an odd choice for tough female role. While she does look fit, it doesn’t translate to serious femme fatale personality. Its change to more humorous tone is different from the futuristic noir of the movie, it’s not bad and probably better to accommodate TV series. It does rely too much on casual cop spectacle, yet doesn’t really have the draw or chemistry. Not to mention the use of psychics is getting old, the foreshadowing gimmick feels like a puzzle played too many times.

The presentation is impeccable though. It’s obvious that the show invests a lot on making the world looks brightly inviting. The details for gadgetry, environment and investigation are splendid. This world definitely could work for foundation for TV series, although the narrative and characters are not as intriguing. It was originally given 13 episodes but shortened to 10 now that all 10 have aired it looks like this show was put to sleep.