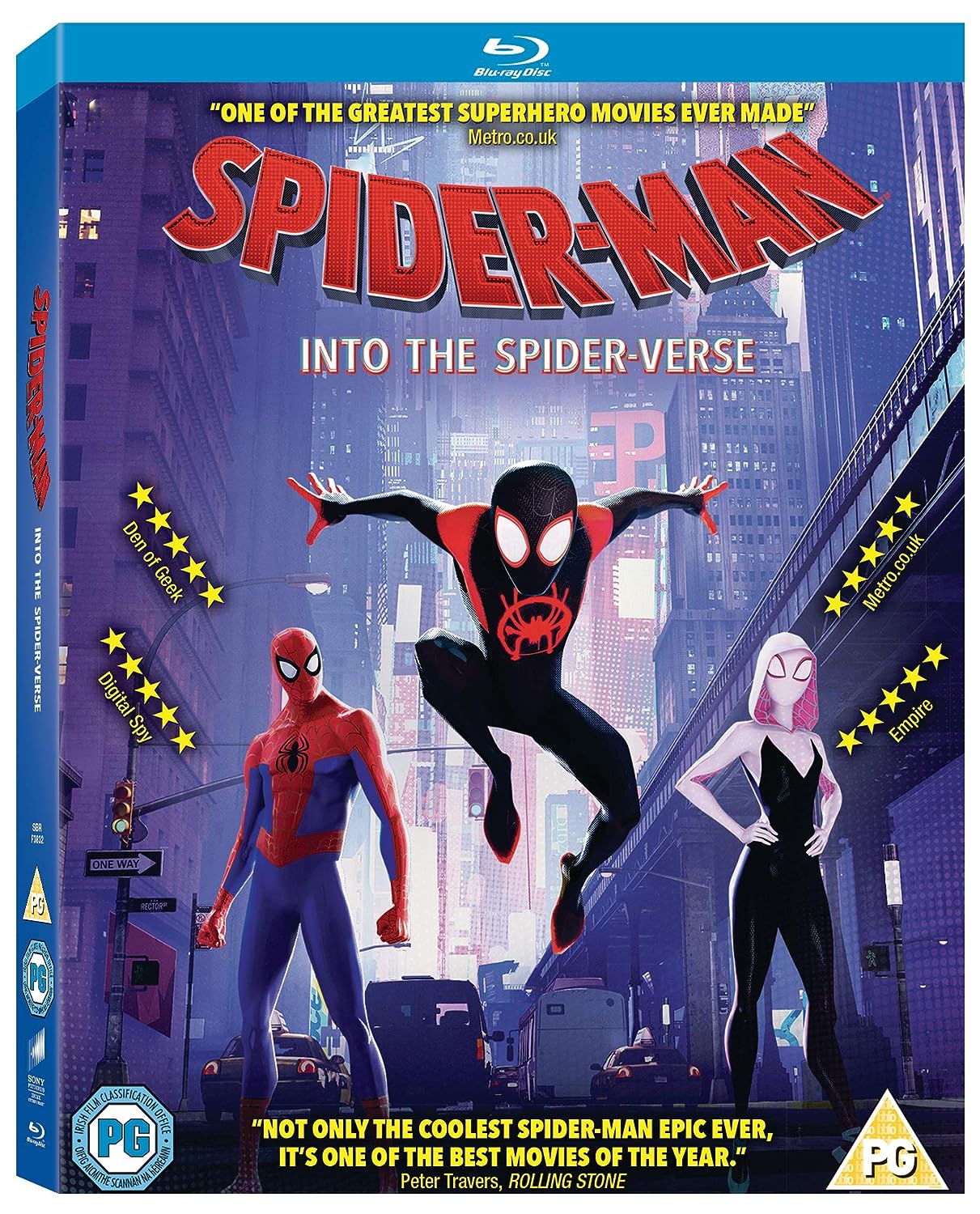 Teenager Miles Morales struggles to live up to the expectations of his father, police officer Jefferson Davis, who sees Spider-Man as a menace. Miles changes to a boarding school. He sneaks out and goes to his uncle Aaron Davis’ house.When he takes Miles to an abandoned subway station to paint graffiti, Miles is bitten by a radioactive spider and gains spider-like abilities.Miles returns to the station to search for the spider and discovers a particle accelerator called “The Super-Collider” built by Wilson Fisk. Fisk hopes to access parallel universes to find alternative versions of his deceased wife and son, who died in a car crash after they found Fisk trying to kill Spider-Man. Spider-Man tries to disable the collider while fighting Fisk’s enforcers, Green Goblin and Prowler. Spider-Man saves Miles and senses that they are alike. Green Goblin shoves Spider-Man into the collider, causing an explosion that kills Green Goblin. Wounded, Spider-Man gives Miles a USB drive to disable the accelerator and warns that the machine could destroy the city if reactivated. Miles watches in horror as Fisk kills Spider-Man, and flees from Prowler.Miles tries out his newfound abilities in a Spider-Man Halloween costume, but in the process damages the USB drive. At Spider-Man’s grave, Miles meets Peter B. Parker, an older and worn-down version of Spider-Man from another dimension. Upon meeting Peter, Miles inadvertently discovers a power to emit a bio-electric pulse to disable his victim. Peter reluctantly agrees to train Miles in exchange for help stealing data to create a new drive. In Fisk’s research facility, Miles discovers he has the power to turn invisible. They are confronted by chief scientist Olivia Octavius, who reveals that Peter will die due to cellular decay if he stays longer in their dimension after taking DNA samples from Peter.Miles and Peter are rescued by Gwen Stacy, Spider-Woman from another dimension. They find Peter’s aunt, May Parker, who is sheltering more heroes from other dimensions – Spider-Man Noir, Spider-Ham, and Peni Parker – who are also deteriorating. Miles offers to disable the collider so the others can return home, but the heroes tell him he lacks experience.Miles retreats to Aaron’s home, where he discovers that Aaron is the Prowler. He returns to May’s house, where Peni has completed the drive; however, he is followed by Fisk, Prowler, Octavius, Scorpion, and Tombstone, leading to a brawl. Miles flees, but is captured by Prowler and unmasks himself. Unwilling to kill Miles, Aaron is shot by Fisk. Miles flees with Aaron, but Aaron dies of his injuries. Jefferson sees Miles mourning over Aaron and concludes that Spider-Man killed him.The heroes regroup with Miles in his dorm. Peter restrains Miles with his webs to ensure his safety before heading out with the heroes, choosing to sacrifice himself by staying behind and deactivating the collider. Jefferson arrives outside Miles’ door and, assuming he does not want to speak to him, apologizes for his mistakes.Miles masters his powers and goes to Aunt May’s, where he gains web shooters and repaints Peter’s suit. He joins the heroes and helps them defeat Fisk’s enforcers before activating the USB drive and sending them home. Fisk and Miles fight throughout the collider, attracting Jefferson’s attention. As Miles is nearly killed, Jefferson realizes that Spider-Man is not the enemy and encourages him. Miles paralyzes Fisk with his venom blast and throws him at the kill switch, destroying the collider.

Fisk and his enforcers are arrested and Jefferson recognizes Spider-Man as a hero. Miles embraces the responsibilities of his new life. Back in their home dimensions, the heroes return to their lives; Peter prepares to fix his relationship with Mary Jane, and Gwen finds a way to contact Miles across dimensions. In another dimension, Miguel O’Hara travels to a 1960s New York and argues with Spider-Man.

A movie worthy of Stan Lee’s approval. Incredible animation, great story, great message. This film lives up to the hype and honestly surpassed my expectations. The only reason I think there are some negative reviews is because you can never please everyone. However, for the vast majority of viewers, I believe you’ll find this film to be great. Highly recommend.