Susan Cooper (Melissa McCarthy) is a desk-bound CIA analyst guiding her partner Agent Bradley Fine (Jude Law) on a mission to Varna from a CIA office in the Washington, D.C. area. Fine kills Tihomir Boyanov after he sneezes without first finding a suitcase nuke whose location is known only to Boyanov. Meanwhile, the agency learns that Boyanov’s daughter Rayna (Rose Byrne) might know the location of her father’s device, so they send Fine to infiltrate her home. However, Rayna shoots Fine dead while Susan watches online. Rayna knows the identities of all the agency’s top agents, including Fine and Rick Ford (Jason Statham). Susan, who is unknown to Rayna, volunteers to become a field agent, and her boss, Elaine Crocker (Allison Janney), agrees. Ford quits in disgust over Susan being chosen for the assignment.
Susan is sent to Paris to spy on Sergio De Luca (Bobby Cannavale). Later that night, Ford appears in the hotel Susan is staying at and insists that she will ruin the mission due to being an inexperienced field agent. The next morning, Susan sees an assassin working for De Luca, and one of his contacts, exchanging Ford’s bag for one with a bomb inside it. Susan warns Ford, then catches up to the assassin, but he is killed when they fight. Susan follows De Luca to Rome, where she meets her contact Aldo (Peter Serafinowicz), a suave Italian informant who makes inappropriate advances towards her. Susan meets Rayna in a casino, prevents Rayna’s assassination, and becomes part of her inner circle. When they fly in her private plane to Budapest, the steward kills the bodyguard and pilots and tries to kill Rayna, but Susan subdues him and lands the plane in Budapest.

Rayna believes Susan to be a CIA spy, but Susan convinces Rayna that her father hired her to be Rayna’s bodyguard. In Budapest, the two encounter Susan’s best friend Nancy B. Artingstall (Miranda Hart), who is sent by Crocker to provide back-up. After being shot at in the street, Susan orders Nancy to get Rayna to safety while she pursues the shooter’s vehicle. The shooter turns out to be CIA double agent Karen Walker (Morena Baccarin), who sold Rayna the names of the agents. As she is about to shoot Susan, Walker is killed by an unknown sniper. Later that night, Susan and Nancy accompany Rayna to a party. The contact is De Luca’s associate, Lia (Nargis Fakhri). Nancy creates a diversion so Susan can fight Lia, who is a skilled assassin. Just as Susan is about to arrest Lia, she is fatally stabbed in the chest by an unknown assailant, who turns out to be Bradley Fine. Susan is captured and is told that Fine faked his death so he could become Rayna’s lover.
After Susan is imprisoned with Aldo in a bunker, Fine appears and reveals to Susan that the real reason he faked his death was to gain intelligence on the device’s location, which could only happen if he gained Rayna’s trust. Fine also reveals that he was the one who assassinated Karen. Susan and Aldo escape after subduing two bodyguards. Eventually, Susan accompanies Rayna and Fine at De Luca’s mansion while posing as a double agent. Chechen terrorist Solsa Dudaev (Richard Brake) and his men arrive to purchase the device for a suitcase full of diamonds. Rayna then reveals the location of the device. However, De Luca, now in possession of the device and doubting that Dudaev can safely smuggle it into the United States, kills him and his men and keeps the diamonds. De Luca intends to sell the device to someone who can transport it to New York City within a week. As De Luca is about to kill Rayna, Ford appears and distracts him, allowing Susan to save Rayna’s life again.
De Luca escapes with the device and diamonds on his helicopter, with Susan and Ford clinging to the landing gear. Ford loses his grip, causing him to falls into the lake ocean, leaving Susan to confront De Luca in the helicopter alone. After Nancy and Aldo arrive in a helicopter and help Susan kill De Luca, Crocker shows up to recover the device. Rayna is arrested, but it is implied that she has come to like Susan as a friend. After Aldo reveals to Susan that his real name is Albert and he is an MI6 agent, he invites her to dinner should they ever cross paths in London, which Susan accepts. Susan declines a similar offer from Fine and instead opts for a girls’ night out with Nancy. The next morning, Susan is shown screaming after waking up amidst empty champagne bottles, realizing that she has slept with Ford.
I thought Spy would be just another parody of the James Bond-type of movies, cheap and cringy. But I was wrong! This is a highly entertaining and intelligent film. The leading lady Melissa McCarthy excels in this clever action-comedy galore. The ensemble of actors, the script, director’s work all makes for a great film. 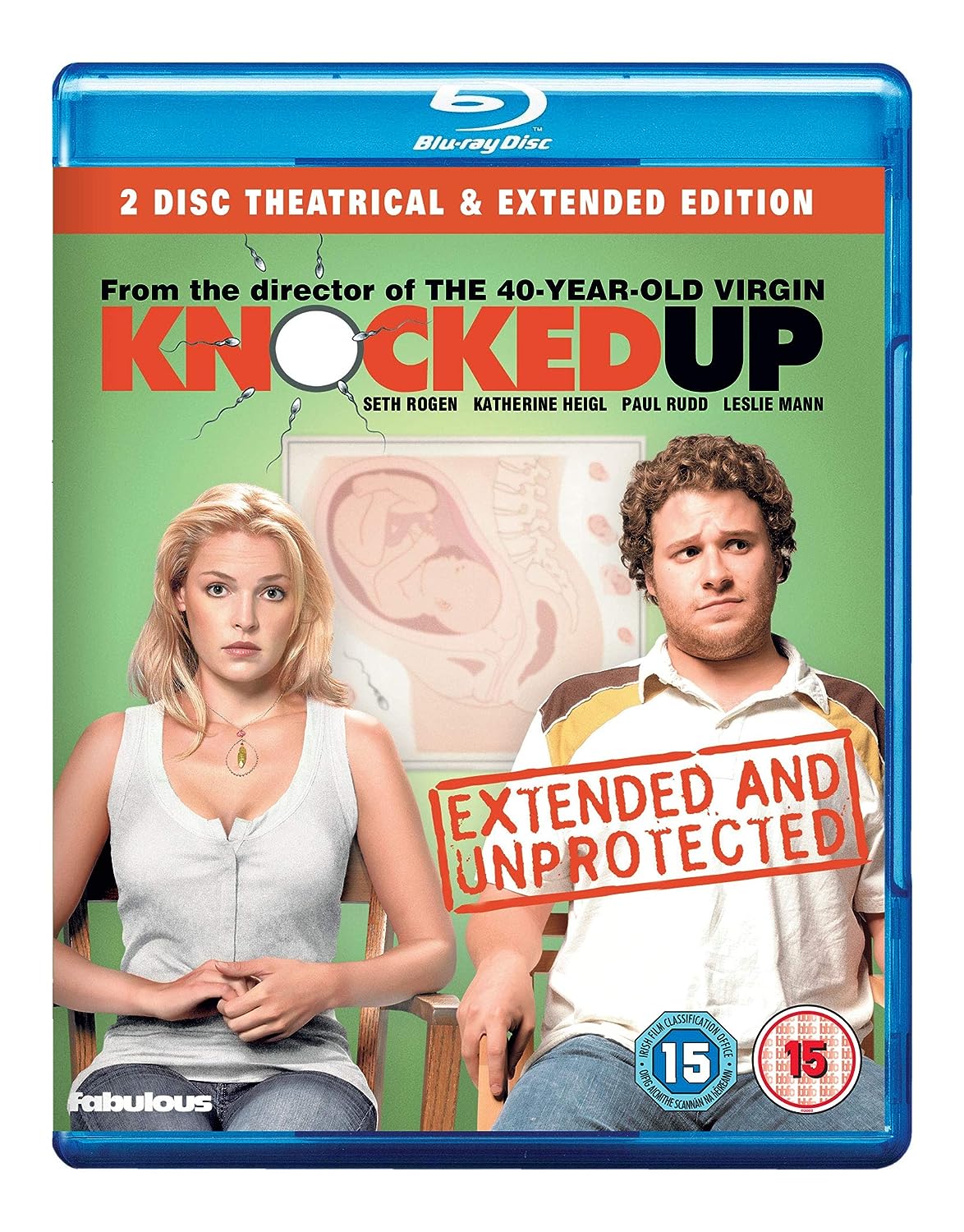 The 40 Year Old Virgin took more than two hours to get its main character laid. In Knocked Up…? Fifteen minutes flat. It’s not that Ben Stone (Seth Rogen) was on the prowl or anything; fate just kinda got hammered and passed out in his lap. See, Alison Scott (Katherine Heigl) landed a gig as on-air talent at E!, and after celebrating a bit too hard, she wakes up the next morning to Ben’s hairy, pasty, bare ass poking out of her bedsheets. Ali groans to her sister (Leslie Mann) about making such a shameful mistake, while Ben darts home to brag to his stoner roommates as they slowly get their topless celebrity database off the ground.

Writer/director Judd Apatow doesn’t use Knocked Up as an excuse to toss in whatever dick jokes he’d been stockpiling for the past couple of years. He genuinely likes and respects these characters, and so much of what happens is drawn from his own experiences as a father-to-be that as hysterical as the movie often is, it also feels surprisingly real and sincere. Knocked Up treats pregnancy with quite a bit of gravity, and the way its characters fight — particularly between on-screen husband and wife Paul Rudd and Leslie Mann — can be unflinchingly cruel. Most filmmakers would water down the less glamorous side of love, romance, and parenthood or use them as a springboard for cheap, easy laughs, but Apatow is sharp enough to deftly balance the comedy with the drama.

The movie is perfectly cast. Katherine Heigl is a buxotic Amazon cut from the Russ Meyer cloth, sure, but she’s also sweet, somehow sympathetic no matter how much her character’s hormones may be raging, and sharp enough to hold her own with the rest of the cast. Seth Rogen joins a small army of Apatow regulars — name just about any project the prolific producer has shepherded over the past decade and chances are at least six people from it are in here somewhere — and it’s a breakout role for him. Ben is slovenly but kind of endearing at the same time, enough so that I could almost buy someone with Heigl’s good looks succumbing to his charms. His jaunt into adulthood feels natural and believable too, not just something in a montage penned by a screenwriter collecting a seven figure payday. There’s something about the fact that Ben’s roommates are played by actors who are all friends in real life that gives their loose, improvisational energy that much more spark.

Knocked Up didn’t strike me as the sort of instant classic so many people heralded it as, but I did enjoy it, and I’m kind of left with the impression that the movie will grow on me more and more its viewed.

Though Wiig has popped up recently in Whip It and Adventureland, to fine successes, Bridesmaids marks her first leading performance, and she’s found the right one to start with in Annie. A broke, cynical chef who’s recently closed her Milwaukee bakery, losing her boyfriend in the process, she now works in a jewelry store, sleeps with a handsome but asinine man-child (Jon Hamm) looking for a no-strings sex-buddy, and avoids her odd British brother-sister roommates. Annie’s sad-sap state makes for a near-perfect character in which Wiig can flaunt her ill-at-ease style, uncomfortable in her unerring self-created awkwardness. She’s a sad character, almost aggressively so, which might rub some the wrong way because of how resolutely she keeps herself at arm’s length from contentment. Yet there’s something relatable about her self-deprecation, especially once her childhood friend Lillian (Maya Rudolph) asks her to be the maid-of-honor at her wedding — and to do the planning and organizing that comes with the territory.

Naturally, Annie meets an eclectic group of Lillian’s friends and soon-to-be family who will fill out the rest of the wedding court: a sex-minded mom (Wendi McLendon-Covey, Reno 911) with a ton of kids and a biting attitude; a virginal mouse of a newlywed (Ellie Kempler, The Office); bullish sparkplug Meghan (Melissa McCarthy, Mike and Molly), the government-employed sister to the groom; and Helen (Rose Byrne, Get Him to the Greek), a well-to-do housewife trying to strong-arm her way into Annie’s spot as maid-of-honor. Feig realizes that these are all types, and he lets them run loose with their quirky mannerisms, but he doesn’t go too outlandish to make them feel like far-removed caricatures.

Annie’s rattled by the duties and the feeling that her friend’s slipping away, not to mention her own monetary and relationship woes, which zigzags along the significant events in Bridesmaids that hallmark most pre-wedding lead-ups. Sure, if you want to boil it down to the least-common denominator, Feig’s picture can essentially be labeled a female iteration of The Hangover, where the ritual of strippers, alcohol, and wild partying in the groom’s rite of passage are replaced with luncheons, dress-fittings, and bridal showers. But this isn’t a frilly affair, nor is it simply a fantastical lampoon on idealized planning. Compliments of Wiig and Mumolo’s sharply-written script, Lillian’s path down the aisle turns into a stylized elevated-reality daze of misfortune, often due to her best-friend trying to cling onto what she finds familiar by her own means. But it’s got something else behind its gags: when it hits over-the-top notes that play to the dreamed-up fantasies of weddings and the gleeful pre-events, it also double-backs to Annie’s shambled life, lending genuineness to the missteps she makes.

Maybe it’s because the humor’s supported by a heartfelt backbone that it’s both effective and affective, extending beyond its gags into this clever, modest portrait of a woman in a growing stage that just so happens to be hysterically funny. Annie’s shown at her most desperate — sleeping with a slimeball, losing her penniless and destitute battle with the rich-and-beautiful Helen, and slowly but unsuccessfully building a relationship with an affable cop, Rhodes (Chris O’Dowd), who’s got a thing for carrots — and her state informs the hoopla that Wiig and Mumolo have written, always with some underlying purpose that ties back to the lowly baker trying to maintain a stranglehold on her old life. Bridesmaids might be out to prove that the girls are capable of playing just as dirty as the guys.