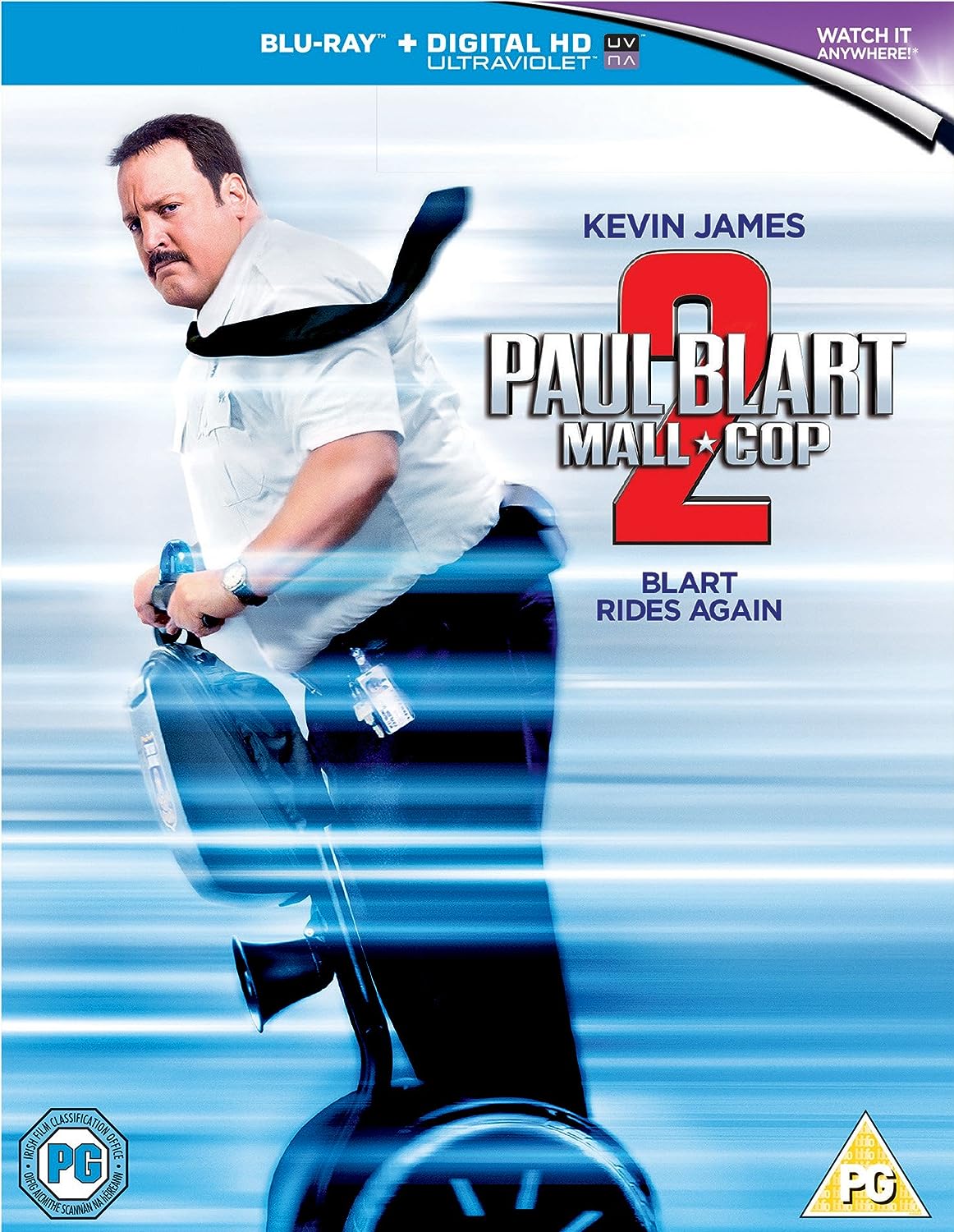 Six years after the events of the first film, Paul Blart (Kevin James) is recovering from several misfortunes. His wife Amy (Jayma Mays) divorced him six days into their marriage, and his mother Margaret (Shirley Knight) was killed after being hit by a milk truck. To feel better, Paul takes pride in patrolling his mall, the West Orange Pavilion Mall. Paul receives an invitation to a security officers’ convention in Las Vegas and begins to believe his luck is about to change. His daughter Maya Blart (Raini Rodriguez) discovers that she was accepted into UCLA and plans to move across the country to Los Angeles, but in light of her father’s invitation, she decides to withhold the information for now.After arriving in Las Vegas, Paul and his daughter meet the general manager of Wynn Hotel, a pretty young woman named Divina Martinez (Daniella Alonso), to whom Paul is instantly attracted. He later learns that she’s dating the hotel’s head of security, Eduardo Furtillo (Eduardo Verástegui). Meanwhile, Maya and the hotel’s valet, Lane (David Henrie) become instantly attracted to each other. A security guard from the Mall of America attending the convention, Donna Ericone (Loni Love), is aware of Paul’s earlier heroics in the West Orange Pavilion Mall incident and believes Paul will be the likely keynote speaker at the event. However, Paul discovers that another security guard, Nick Panero (Nicholas Turturro), is giving the speech.In the midst of the convention, a criminal named Vincent Sofel (Neal McDonough) and a gang of accomplices disguised as hotel employees are secretly plotting to steal priceless works of art from the hotel and replace them with replicas, then sell the real ones at auction. In the meantime, Paul has become overprotective of Maya after discovering her flirting with Lane and spies on their conversations. He is later mocked by Eduardo for his lack of professionalism in an event where hotel security was notified when Maya went missing. In an ensuing argument with her father, Maya boldly claims she’s attending UCLA despite Paul’s wishes that she remain close to home at a junior college.At the convention, Paul, Donna, and three other security guards, Saul Gundermutt (Gary Valentine), Khan Mubi (Shelly Desai), and Gino Chizzeti (Vic Dibitetto) check out the non-lethal security equipment on display. Later, Paul finds Panero drunk hitting on a woman at the bar. Paul attempts to defuse the situation and Panero passes out, giving Paul a chance to be the event’s speaker. He contacts Maya asking her to attend, but he learns that she’s at a party with Lane. As Paul prepares his speech, Vincent and his cohorts put their plan into motion. Maya absentmindedly walks into the midst of the heist and is taken hostage. Lane is kidnapped as well while searching for her. Paul gives a rousing speech that moves everyone at the convention, as well as Divina, who inexplicably finds herself becoming more attracted to Paul with each passing moment. Following the speech, Paul learns about Maya and Lane’s situation and rushes to help but passes out due to his hypoglycemic condition that has plagued him for years.After recovering, Paul is able to take down several of Vincent’s thugs and gathers intel on the group’s intentions. Using non-lethal equipment from the convention, he is able to take out more of Vincent’s crew. Meanwhile, Maya and Lane overhear Vincent adamantly refusing an oatmeal cookie due to a severe oatmeal allergy. Working with a team – Donna, Saul, Khan, and Gino – Paul is able to clumsily dismantle Vincent’s operation, with Maya severely incapacitating Vincent by rubbing oatmeal-infused concealer on his face. Afterward, Paul convinces Divina that her attraction for him is misplaced, and Eduardo is with whom she should really be. Paul also accepts Maya going to UCLA, funding her tuition with the reward money he obtained from Steve Wynn for stopping Vincent. After dropping off Maya at UCLA, Paul falls in love with a passing Sheriff’s Deputy who reciprocates his advances.There were plenty of scenes that will have both kids and adults laughing together. Not as good as the first but if you just looking a few laughs on  a slow night, then you will enjoy this. 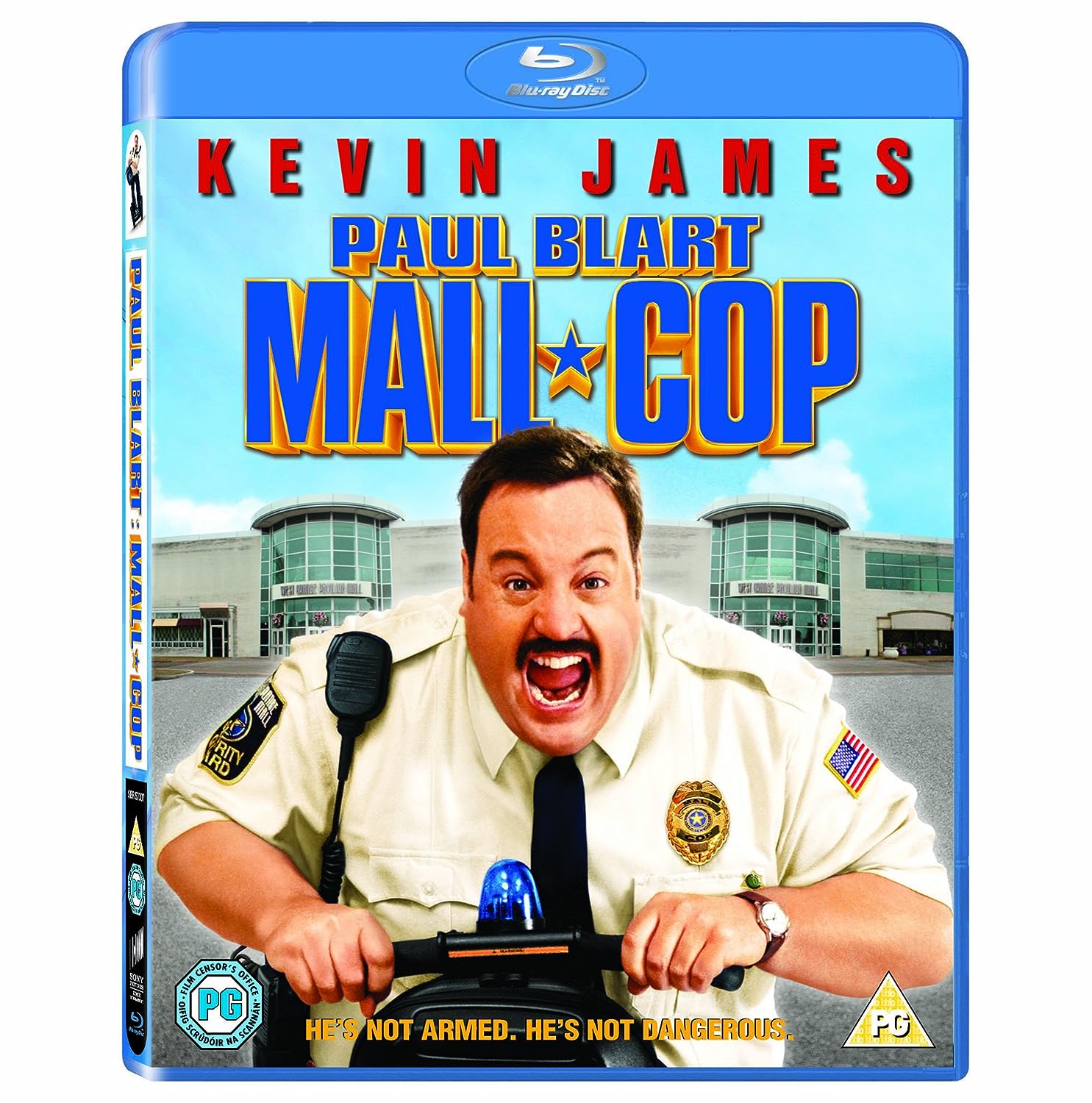 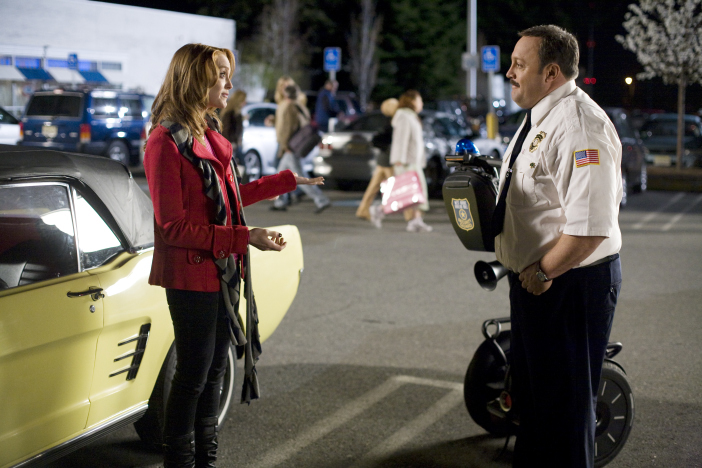 Paul Blart (Kevin James) lives in West Orange, New Jersey with his teenage daughter, Maya (Raini Rodriguez), and elderly mother, Margaret (Shirley Knight). Aspiring to join the New Jersey State Police, he trains at the police academy, but his hypoglycemic medical condition causes him to collapse just inches from the finish, therefore failing the exam. To shape things up for his career, Blart works as a security guard at the West Orange Pavilion Mall. 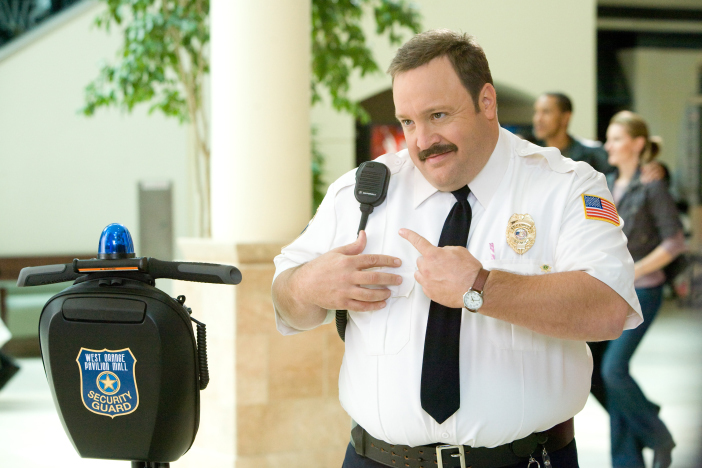 Blart patrols the mall on a Segway to assure things are safe and clean. He goes to the surveillance room and trains Veck Simms (Keir O’Donnell), who is new but uninterested on the job. Meanwhile, Blart eventually becomes acquainted with Amy Anderson (Jayma Mays), the vendor of a new kiosk. He meets her one evening at a restaurant with other mall employees. Things initially go well, but Blart is sidetracked when he decides to participate in a nacho-eating contest with his friend Leon (Jamal Mixon). The hot sauce is more than Blart can handle, and he begins chugging down several alcoholic beverages causing him to become excessively drunk and incoherent. He crashes the party and makes a wild exit by falling through a window. 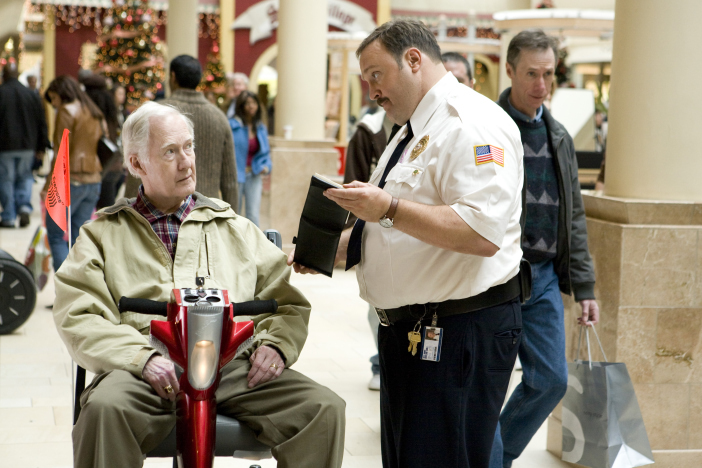 Two days later, on the night of Black Friday, an organized gang of thugs disguised as Santa’s Village employees begin what appears to be a bank heist inside the mall. They take Amy and other customers in the bank hostage. Simms is revealed as the gang’s leader – his mall security job was a ploy to gather intelligence. They are keeping the hostages as insurance for the gang’s escape. The crew forces shoppers to exit the mall and strategically places motion sensors around each entrance to detect any attempt to enter or exit the building. 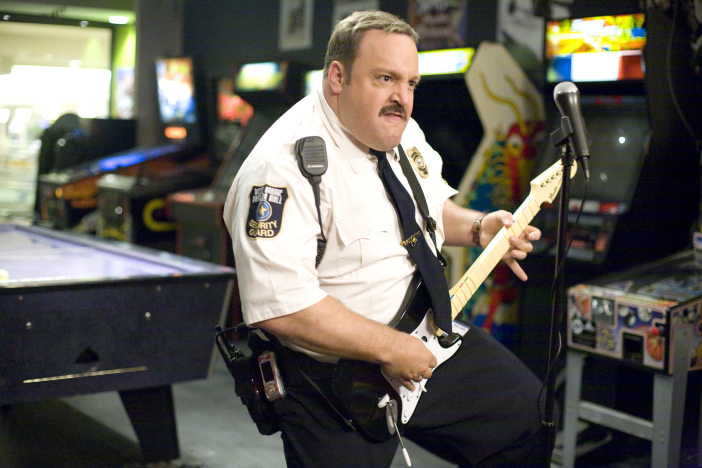 Blart takes a break in the arcade and plays Detroit Rock City via Rock Band. He eventually walks back out in the mall, and discovers the entire mall is evacuated and under a state of emergency. Upon realizing this, he calls the police, and slips out of the mall to speak with Commander Sergeant Howard (Adam Ferrara). Blart realizes Anderson is still inside after spotting her car in the parking lot and decides to return to the mall to look for her. A state SWAT team soon arrives with Commander James Kent (Bobby Cannavale) at the helm. Kent, a former classmate and bully from Blart’s childhood, takes control of the police units and orders Blart to let them handle the situation. After spotting Anderson as one of the hostages, Blart refuses and attempts a rescue. Vastly outnumbered and physically outclassed, Blart takes a stand against Simms’ crew using improvised measures to take them down one by one. He discovers credit card codes written in invisible ink on the burglars’ arms and realizes that their real plans go beyond robbing the bank. 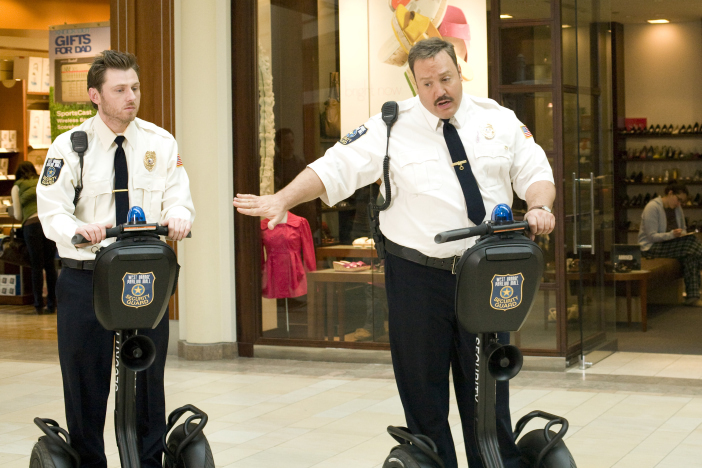 Maya, unaware of what has happened, shows up at the mall on her way to bring Blart some food, but Simms’ remaining henchmen seize her and add her to the hostage group. Blart manages to arrest all of Simms’ accomplices and attempts to evacuate the hostages by pulling them up through an air vent. The plan fails when Leon cannot fit. Simms enters the room, capturing Blart and forcing him to give up the credit card codes he recorded on his cell phone. Simms escapes, kidnapping Anderson and Maya. As police swarm the mall to apprehend the criminals and rescue the hostages, Blart borrows a display minivan and joins Kent in pursuing Simms to the airport, where he is attempting to escape to the Cayman Islands. 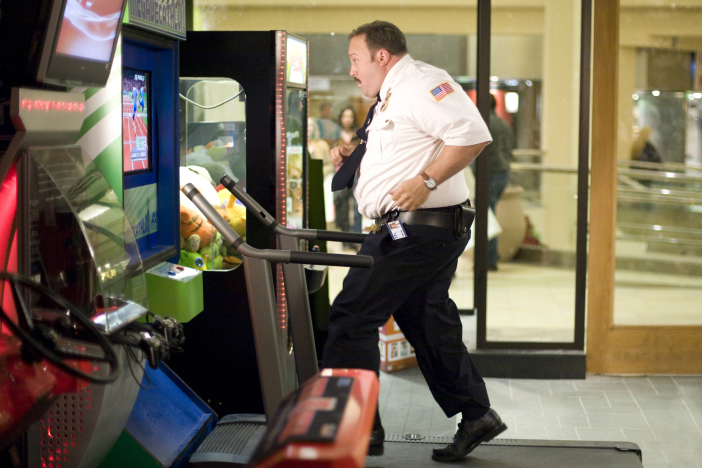 After a brief scuffle, Blart overpowers Simms and puts him in handcuffs. Moments later, however, Kent pulls his gun on Blart revealing that he was in cahoots with Simms. Kent demands the phone containing the codes from Blart, who refuses and responds by smashing the phone into the ground. Before Kent can retaliate by shooting Blart, Chief Brooks (Peter Gerety) of the mall security team arrives in time and shoots Kent in the arm. Kent and Simms are arrested, and Anderson and Maya are returned safely. For his bravery and assistance, Howard offers Blart a job with the New Jersey State Police. Blart honorably declines opting to remain in mall security. Blart and Anderson are eventually married in the mall, where they exchange vows on a set of black and white Segways. 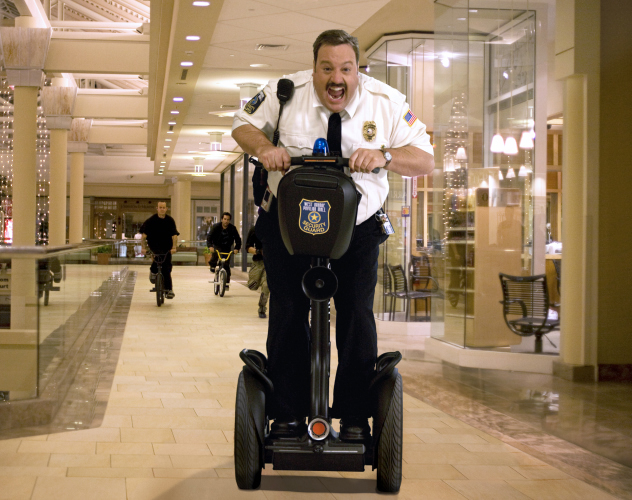 It’s a fun film that  really  works and raises a smile. Critics aside it’s an enjoyable film.