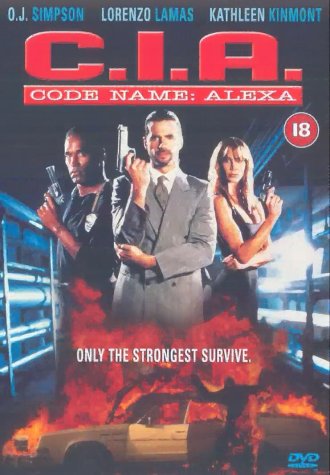 Mark Graver (Lamas) a mild-mannered CIA agent but also a man of action. He won’t hesitate to jump into the fray and cut through the red tape. Further evidence that he is cool are his ponytail and constant, well-groomed five o’clock shadow. (Graver’s Chief: “I don’t approve of your methods, but you certainly get the job done”.) Graver gets the assignment of a lifetime when he goes up against a gang of terrorists led by the sadistic Victor Mahler (Cord). These baddies shoot up churches, kill cops and are just plain evil in every regard. And now they want nuclear weapons. To get them, Mahler must get a hold of “The Microchip!” and he will go to any ends to get it.

Meanwhile, cops Murphy (Simpson) and Benedetti (Griggs) are also working the case, and they come across Alexa (Kinmont), a ruthless assassin working for Mahler. Soon, Graver realizes he can use Alexa to infiltrate Mahler’s compound but he must undo her brainwashing. So he basically kidnaps her young daughter and keeps them both at a massive CIA compound. So now the feds, the cops and Alexa must work together to bring down Mahler because Alexa’s daughter, and the fate of the world, are at stake. Will she come through, or revert back to her old ways? A major plus for this PM production is its fast pace. The movie really zooms by, and no wonder, as it has classic Lamas, Kinmont as a very tough cookie (Lamas and Kinmont together once again), Alex Cord, in a very entertaining manner, chews the scenery, a rockin’ score by Louis Febre, a CIA command center that has it all from martial arts training to a gun range to an upscale restaurant – all in one room, and, last but…actually least – OJ Simpson. What other movie could claim these things.

If you’re a fan of the low budget action films then you will like CIA Code Name: Alexa