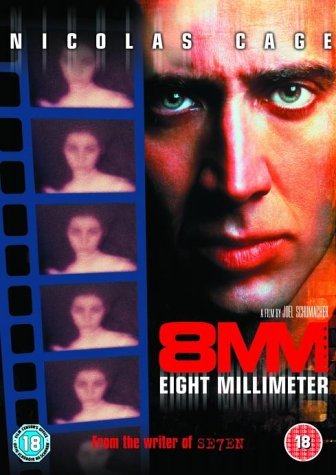 Private investigator Tom Welles is contacted by Daniel Longdale, attorney for wealthy widow Mrs. Christian, whose husband has recently died. While clearing out her late husband’s safe, she and Mr. Longdale find an 8 mm movie which appears to depict a real murder, but Mrs. Christian wants to know for certain. After looking through missing persons files, Welles discovers the girl is Mary Ann Mathews, and visits her mother, Janet Mathews. While searching the house with her permission, he finds Mary Ann’s diary, in which she says she went to Hollywood to become a film star. He asks Mrs. Mathews if she wants to know the truth, even if it is the worst. She says that she wants to know what happened to her daughter.In Hollywood, with the help of an adult video store employee called Max California, Welles delves into the underworld of illegal pornography. Contact with a sleazy talent scout named Eddie Poole leads them to director Dino Velvet, whose violent pornographic films star a masked man known as “Machine.” To gain more evidence, Welles pretends to be a client interested in commissioning a hardcore bondage film to be directed by Velvet and starring Machine. Velvet agrees and arranges a meeting in New York City.

At the meeting, attorney Longdale appears and explains that Christian had contracted him to procure a snuff film. Longdale says that he told Velvet that Welles might come looking for them. Realizing that the snuff film was authentic, Welles knows he is at risk. Velvet and Machine produce a bound and beaten California, whom they abducted to force Welles to bring them the only surviving copy of the illegal film. Once he delivers it, they burn it and kill California. As they are about to kill Welles, he tells them that Christian had paid $1,000,000 for the film. Velvet, Poole, and Machine received much less and that Longdale kept the major portion. In an ensuing fight, Velvet and Longdale are both killed; Welles wounds Machine and escapes.

He calls Mrs. Christian to tell her his discoveries and recommends going to the police, to which she agrees. Arriving at her estate, Welles is told that Mrs. Christian committed suicide after hearing the news. She left envelopes for the Mathews family and Welles: it contains the rest of his payment and a note reading, “Try to forget us.” Welles decides to seek justice for the murdered girl by killing the remaining people involved. Tracking down Poole, Welles takes him to the shooting location and tries to kill him. He calls Mrs. Mathews to tell her about her daughter and asks for her permission to punish those responsible. With that, he returns and pistol-whips Poole to death, burning his body and pornography from his car. Welles traces Machine and attacks him at home. Welles unmasks him, revealing a bald, bespectacled man named George. He says, “What did you expect? A monster?” George goes on telling Welles that he has no ulterior motive for his sadistic actions; he does them simply because he enjoys it. They struggle, and Welles kills him.

After returning to his family, Welles receives a letter from Mrs. Mathews, thanking him and suggesting he and she were the only ones to care about Mary Ann.

8mm is in no way for the faint of heart, there are some extremely disturbing images. Nicholas Cage did a great job, but Joaquin really takes the show here. He made his character incredibly believable and almost sympathetic. I would recommend this film for a watch, it’s a great thriller.

CAST
James Marsden (X-Men)
Lena Headey (Game of Thrones)
Norman Reedus (Blade II)
Kate Hudson (Almost Famous)
Eric Bogosian (Under Siege 2)
Edward James Olmos (Blade Runner)
Joshua Jackson (Cruel Intentions)
Sharon Lawrence (Atomic Twister)
Marisa Coughlan (Bones)
Noam Jenkins (Earth: Final Conflict)
Kristin Booth (Defendor)
The movie takes place on a college campus in the Northeastern United States. Derrick Webb (James Marsden), Cathy Jones (Lena Headey), and Travis (Norman Reedus) are students as well as roommates. They all take a Communications class with Professor Goodwin (Eric Bogosian), in which the subject of gossip is brought up. For their final project, the three students decide to start a rumor and track and see the results. One night while at a nightclub, they run into Naomi Preston (Kate Hudson) and her boyfriend Beau Edson (Joshua Jackson).
It is common knowledge through the campus that Naomi is saving her virginity for marriage. Jones (as Cathy is called throughout the movie) in particular has a problem with Naomi’s wealth and sense of entitlement. Furthermore, Naomi seems to have started a rumor about Jones having sex with Professor Goodwin. While at the party, Derrick meets a girl and brings her upstairs. At this point the girl becomes ill; Derrick then notices Beau and Naomi in the adjacent room kissing. Beau attempts to have sex with Naomi but is rejected. Derrick, Jones, and Travis proceed to begin a rumor that Naomi and Beau had sex. The story begins to vary wildly, first involving a threesome, but soon, due to the nature of gossip, it becomes a story of Beau raping Naomi.

This is a gem in an usually disappointing market. Aimed at the younger generation perhaps, but it isn’t all sex and trash, it quickly becomes very intriguing, as we become part of these teenagers’ world and see the damage their innocent rumour is causing

While racing in a desert with War Machine (James “Rhodey” Rhodes), Iron Man is ambushed by a mysterious new enemy who tries to destroy Tony Stark’s new security satellite, “The Howard”. War Machine is killed in the struggle and Iron Man sets out for revenge. He is intercepted by S.H.I.E.L.D. and Nick Fury who needs to talk to him. He escapes and make it over to Pepper Potts who is on vacation.

They discover that A.I.M. Advanced Idea Mechanics has been conducting research into techno organic weaponry for some time and pinpoint one of their warehouses in Karachi. S.H.I.E.L.D. locates them and Tony comes out the front to be surrounded by Mandroids. He activates his suitcase armor, destroys all the Mandroids, and heads to Karachi. The scene then cuts to a member of A.I.M. trying to sell weapons to a buyer. Punisher comes in and breaks it up. Just as Punisher is about to kill the A.I.M. member, Iron Man saves him in order to get some answers. Iron Man and Punisher then work together and discover the identity of the new enemy being Ezekiel Stane.

Hawkeye and Black Widow are given orders to retrieve Iron Man. Iron Man escapes with the help of the Punisher and continues on to Shanghai where he meets Ezekiel Stane, the son of Obadiah Stane. Ezekiel paralyzes Iron Man with the Technovore and details his plan to replace humanity with his new technology utilizing the technology on the “Howard” satellite to hack into all computers and satellites. Hawkeye and Black Widow show up and arrest both. Later on the Helicarrier, Iron Man discovers War Machine is barely alive. Then the Technovore hacks the craft leaving Iron Man to uses his arc reactor to stabilize the Helicarrier and drive the Technovore out of the systems. Ezekiel is now betrayed by the Technovore and taken over by it causing a big fight with Iron Man resulting in the Helicarrier crashing into Shanghai. When all hope seems lost, War Machine miraculously wakes up and helps Iron Man fight the Technovore.

For fans of anime, this is truly a visual treat. There are numerous little shout outs to other anime shows, most notably gundam. Yet like most modern anime, the visuals are about the only thing good going for it. The story makes little sense. Stark could have saved himself a lot of trouble with SHIELD if he just stopped for a bit and listened. But no. Our character of Stark is a one trick egotistical pony, dead set on having things his way. The other characters also come across as flat personalities, more typical anime fodder for fanservice than actual contributors to the story. We even have your typical angst ridden teen out to “remake the world”.