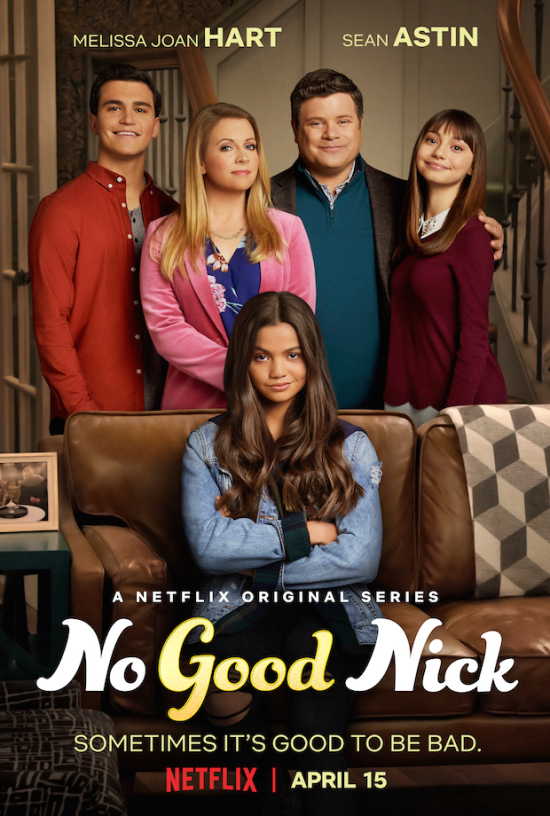 No Good Nick is exactly what it advertises itself as… A family show and like any family show there are moments that are downright cringey. I mean first off with Sabrina the teenage witch (Melissa Joan Hart) and Samwise Gamgee (Sean Astin) playing Mr. and Mrs Thompson we already have two VERY big talents showing us exactly why they are some of our favorites every time they are on the screen. With some new faces joining them we can’t help but fall for the Thompsons, and feel compassion and empathy for Nick and the Farelli family. On top of that it is a bit of an emotional roller coaster at times, and there is some EXCELLENT top notch beautiful cinematography. I remember a couple of times thinking….wow that was a beautifully shot scene the cameraman nailed it….and then there was also some scenes where I was left scratching my head wondering what they were thinking. All in all though it is most definitely worth a watch the Thompson family just might be your new favorite television family.

Though you can feel the inexperience at times with some of the newer actors and actresses we are seeing on this show, they still manage to do an excellent job drawing you in. That being said, addressing the “Cringe” in the title there was times when extras, or even the main core actors just felt stiff and forced and it would really take you out of the moment. Now typically we see this a lot in family shows aiming at a wide aged audience, as you do tend to need to spell it out a bit more for some of the particularly younger audiences. That being said it would come across as a bit of…and I don’t even want to say it but…overacting…

If your still with me though, those moments aren’t the heart of the show and they pass as quickly as they come. It took me some time: I initially found the character Molly grating, however by the end of the show my heart was breaking for her and I think this was done intentionally after all she is supposed to be the social justice warrior (note that I’m necessarily saying that is a bad thing!!) versus her brother who was more reserved, and Mitt Romney like, a future presidential candidate perhaps, so the point was for Molly to be a bit in your face, and guilt tripping but ultimately a voice for a better tomorrow and without spoiling anything I believe they even address issues like blind belief in your values without taking into consideration how that would also affect others on the other side of the fence, with Molly learning a few hard life lessons about herself. (As well as the rest of the Thompson family but again I don’t want to go too in depth, you’ll enjoy it more watching it for yourself) Even smaller rolled characters from the first season really shined in the second. For example Jeremy’s friend and….lets call him security guar(perhaps in the future: vice president) truly shone with some comedic gold moments.

Siena Agudong who plays Nick Farelli, makes her debut as head lining star in this show and though she comes off a bit doe-eyed, and she is definitely one of the actresses that has a few (and I truly mean few) cringey acting moments. I would write this one off to inexperience though and on the whole she did an amazing job and it very well may have been in the script or acting directions anyways. By the end of the show you can’t help but feel attached to her character and rooting for her. All in all it’s definitely worth a watch, I don’t however seeing this show having a very long run, the story has already ran most of its course but does setup for a potential third season leaving a few questions unanswered BUT I think this story still has more life in it and it isn’t necessarily a bad thing if it ends after only a few seasons. After all how many shows did we see drag on too long until they became shells of what they formerly were and with endings that left us unsatisified? If it ended right here and now at season 2 they wrapped it up quite nicely and we would have some closure, but I for one actually am looking forward to more. Everything I have criticized was improving as the show went on so it stands to reason it would continue that trend.

An above-average premise mostly fails to elevate an otherwise average sitcom. New on Netflix today, No Good Nick (which is apparently the first of two parts) is a run-of-the-mill sitcom with an admittedly intriguing premise. The Nick of the title is a teenage con artist played by Siena Agudong who ingratiates herself into the well-off Thompson family with the intention of rinsing them all once she’s gained their trust.

There’s some moderate star power to lure in viewers. The family’s parents, Liz and Ed, are played by Melissa Joan Hart (the original Sabrina the Teenage Witch, and therefore kids’ TV royalty) and The Goonies’ and The Lord of the Rings’ Sean Astin. Their kids are plucked straight from the new generation of family-friendly television; Kalama Epstein plays the serious and suspicious Jeremy, and Lauren Lindsey Donzis his woke activist sister Molly. The talent and their well-trodden archetypes are all present and correct, then, as is the general trajectory of the ten-episode first season, which is what makes No Good Nick instantly familiar despite its fresh-feeling setup.

Naturally, then, you can predict most of the major beats. The Thompson family are initially skeptical of Nick — who poses as a distant relative fresh out of foster care — but warm to her general enthusiasm and interest in their mundane hobbies or careers. At the same time, Nick warms to the Thompsons, beginning to realize that what she’s doing just might be wrong and that the immoral puppeteers pulling her strings are not worth her loyalty. There are plenty of ways that No Good Nick could have made more of its premise, but it never really stumbles on a compelling one.

All that’s left, really, is the usual teen-focused sitcom fare, with a particular focus on liberal hot-topics. The gags range from surprisingly funny to horribly cringe-inducing, with no real consistency either way. There’s an effort made to have the characters break out from their archetypal molds, but it never really amounts to much. Despite potential here for a second part that makes good on the promise of its hook, as things stand No Good Nick is, fittingly, not much good.