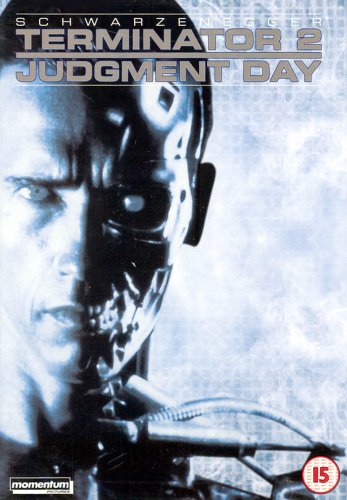 In 1995, John Connor is living in Los Angeles with foster parents. His mother Sarah Connor had been preparing him throughout his childhood for his future role as the Human Resistance leader against Skynet – the artificial intelligence that will be given control of the United States’ nuclear missiles and initiate a nuclear holocaust called “Judgment Day” on August 29, 1997 – but was arrested and imprisoned at a mental hospital after attempting to bomb a computer factory. Skynet sends a new Terminator, designated as T-1000, back in time to kill John. The T-1000 is an advanced prototype made out of mimetic polyalloy (referred to as “liquid metal”) that gives it the ability to take on the shape and appearance of almost anything it touches, as well as knives and other stabbing weapons. The T-1000 arrives under a freeway, kills a policeman and assumes his identity. Meanwhile, the future John Connor has sent back a reprogrammed T-800 (Model 101) Terminator to protect his young counterpart.The Terminator and the T-1000 converge on John in a shopping mall, and a chase ensues after which John and the Terminator escape together on a motorcycle. Fearing that the T-1000 will kill Sarah in order to get to him, John orders the Terminator to help free her. They encounter Sarah as she is escaping from the hospital, although she is initially reluctant to trust the T-800. After the trio escapes from the T-1000 in a police car, the Terminator informs John and Sarah about Skynet’s history. In addition, it would create machines that will hunt and kill the remnants of humanity. Sarah learns that the man most directly responsible for Skynet’s creation is Miles Bennett Dyson, a Cyberdyne Systems engineer working on a revolutionary new neural net processor that will form the basis for Skynet.Sarah gathers weapons from an old friend and plans to flee with John to Mexico, but after having a nightmare about Judgment Day, she instead sets out to kill Dyson in order to prevent Judgment Day from occurring. Finding him at his home, she wounds him but finds herself unable to kill him in front of his family. John and the Terminator arrive and inform Dyson of the future consequences of his work. They learn that much of his research has been reverse engineered from the damaged CPU and the right arm of the previous Terminator. Convincing him that these items and his designs must be destroyed, they break into the Cyberdyne building and retrieve the CPU and the arm. The police arrive and Dyson is shot, but he manages to trigger several explosives, destroying the lab and his research while sacrificing himself. The T-1000 relentlessly pursues the surviving trio, eventually cornering them in a steel mill.The T-1000 and the Terminator engage in physical combat, with the advanced model severely damaging its adversary. The T-800 is seemingly shut down until its emergency back-up system brings it back online. The T-1000 nearly kills John and Sarah until the T-800 appears and shoots it into a vat of molten steel with an M79 grenade launcher, destroying it. John tosses the arm and CPU of the original Terminator into the vat as well. As Sarah expresses relief that the ordeal is over, the Terminator explains that to ensure that he is not used for reverse engineering he must also be destroyed. It asks Sarah to assist in lowering it into the vat of molten steel, since it is unable to “self-terminate”, although John begs the Terminator to reconsider his decision. It bids them farewell as it is lowered into the vat. The Terminator gives a tearful John a final thumbs-up as it disappears into the molten steel and shuts down. Sarah looks to the future with hope, musing that “if a machine … can learn the value of human life, maybe we can too.” 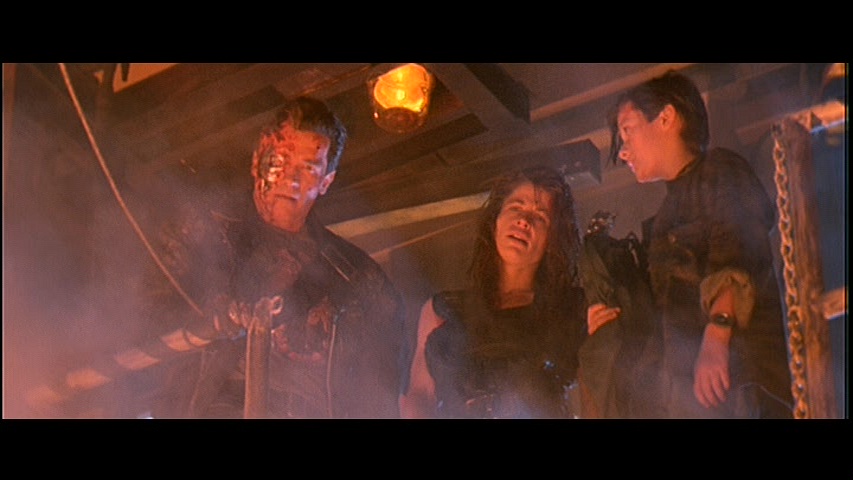 Arguably the finest film of its kind, Terminator 2: Judgment Day captured Arnold Schwarzenegger at the very apex of his Hollywood celebrity and James Cameron at the peak of his perfectionist directorial powers. Nothing the star did subsequently measured up to his iconic performance here, spouting legendary catchphrases and wielding weaponry with unparalleled cool; and while the director had an even bigger hit with the bloated and sentimental Titanic, few followers of his career would deny that Cameron’s true forte has always been sci-fi action. With an incomparably bigger budget than its 1984 precursor, T2 essentially reworks the original scenario with envelope-stretching special effects and simply more, more, more of everything. Yet, for all its scale, T2 remains at heart a classic sci-fi tale.