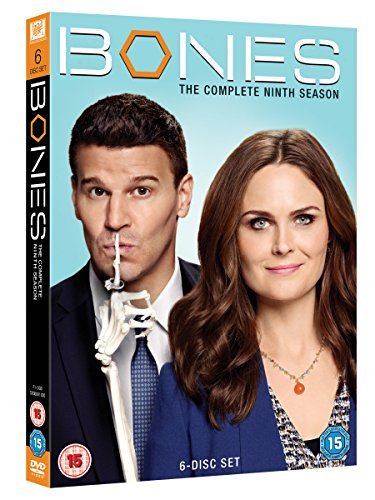 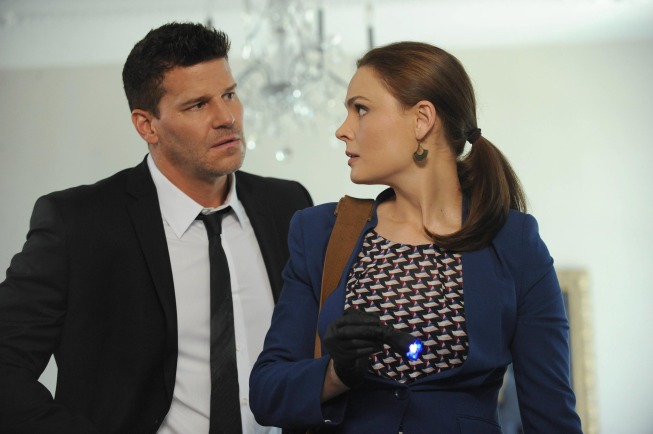 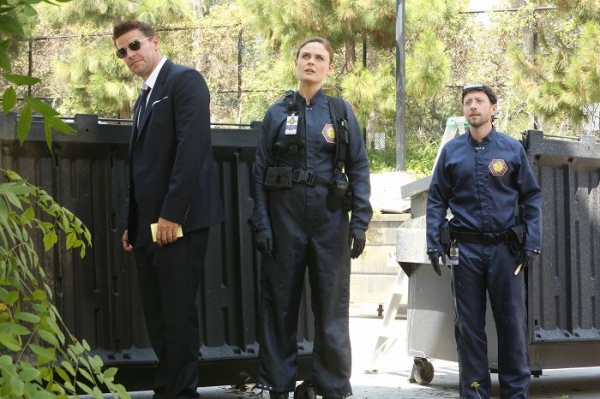 Bones returns for a welcome ninth season with its core cast, clever plots, and sense of humor intact. Forensic anthropologist Dr. Temperance “Bones” Brennan and her crack team of specialists at the Jeffersonian Institute continue to work with their FBI liaison, Special Agent Seeley Booth, on new and challenging criminal cases. First, however, the team will have to resolve their long-running, lethal battle with cyber-genius serial killer Christopher Pelant, who has stayed one step ahead of them while inflicting pain on each member of the cast. 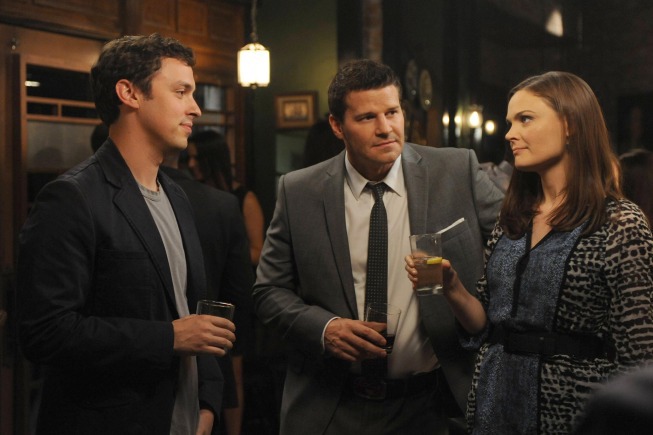 When we last saw the team, they had barely survived their most recent encounter with Pelant. In a final twist of spite, Pelant blackmailed Booth into withdrawing his marriage proposal to Bones, while forbidding him to reveal the reason why. Booth’s promise puts a strain on his relationship with Bones. He will reach out to old Army buddies, including a CIA agent and a former priest turned bartender, for advice. Pelant has his own plan for separating Bones from Bones from Booth, permanently. The entire team will have to be on its mettle to head off Pelant’s insidious plot. 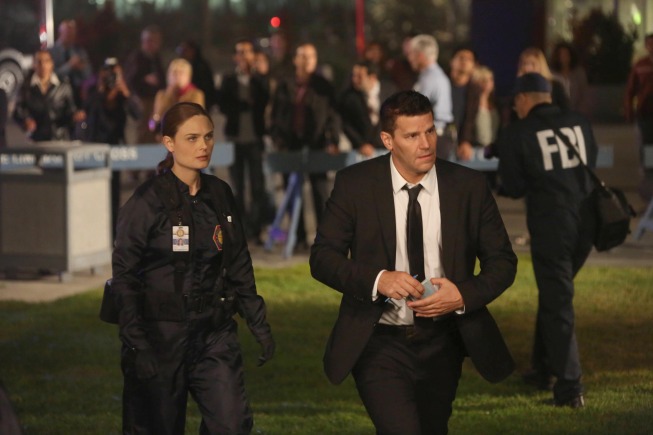 The ninth season continues to feature crime of the week murders for Bones, Booth, and the Jeffersonian lab rats to solve. One episode will have Booth and Bones resurrecting their undercover “Tony” and “Roxie” identities for a hilarious marriage retreat in which they talk all too frankly about their relationship. Psychologist Dr. Sweets will take a leave of absence to work in an outreach center, only to find himself drawn back into a gut-wrenching case involving a gang feud. As in past seasons, other members of the team, including Lab boss Dr. Saroyan, Dr. Hodgins, Angela, and the interns will have their moments in the spotlight. 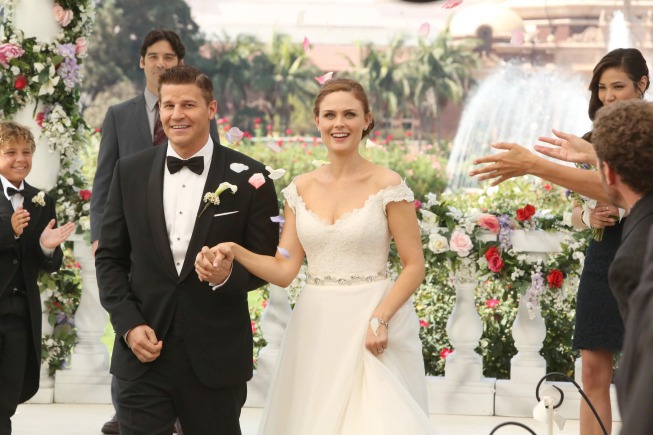 The biggest highlight is the Woman in White, featuring the wedding of the two leads after nine years they final tie the knot.

A year ago, a terrorist attack in Odessa, Texas, left the city decimated. Blamed for the tragic event, those with extraordinary abilities are in hiding or on the run from those with nefarious motives.

Tim Kring pulled off a minor miracle, reviving the Heroes franchise after it sank so far during its first four seasons. In those seasons, there were elements of each that I really liked, but the overall story quality seemed to become more disconnected and surreal. Heroes truly has been reborn.

Kring and the Heroes crew have revived a universe of mystery and wonder. These people–these “evos”–do things that no human body could physically do, like the miracles of old. It gives us hope. They call them “evolved ones” or “evos,” but there is something wonderfully spiritual about this. We have new characters, new abilities, new mysteries and new challenges. I call it a “minor miracle,” because the hot potential Kring originally created, was always there, heavily squandered in seasons 3 and 4. Here, I like what they’ve done. I’m enjoying these new friends and enemies. I especially like how they portray the enemy as unknowingly selfish and arrogant, but who also accuse others of being selfish for wanting to save their own lives. There is so much of that going on in the American government these days, as it did in Nazi Germany nearly a century ago. The parallels are chilling. Yet, the promise of the heroes is gratifying.

The fact that Earth’s magnetic field goes to zero and leaves the planet vulnerable to a violent, civilization-ending solar storm, is a wonderfully solid scenario — far better than the “2012” film’s neutrino absorption nonsense. It reminds me of the wonderfully upside-down deliciousness perpetrated by the UN, NASA, governments and the Corporate mainstream media — turning science into a popularity circus (“consensus”) and stifling debate with cute catch phrases like “settled science” and “deniers,” all the while distracting people from the real horror story that Global Cooling is bad and Global Warming is good. Why? Because we’re in an Ice Age. When the Holocene ends, 7+ Billion people will be in jeopardy, just as they are in this mini-series. Art mimicking reality, despite all the propaganda to keep us from seeing that reality. Nice when entertainment can wake some people up, instead of making them brain dead. The show has some flaws but all in all its a decent mini series with the only problem being the cliffhanger ending knowing that this is just a one off season. 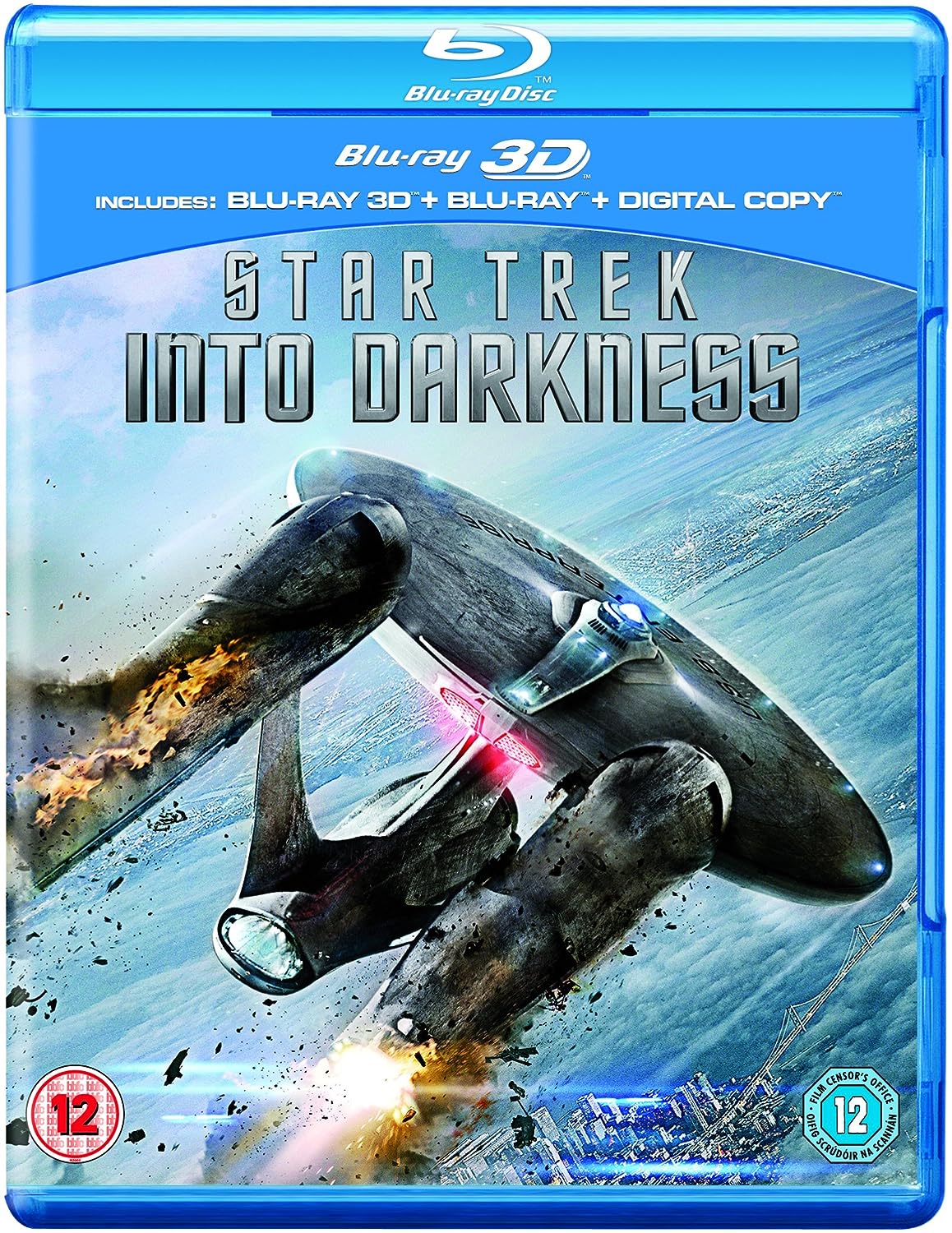 In the year 2259, Captain James T. Kirk is removed from command of the starship USS Enterprise for violating the Prime Directive: he exposed the ship to the primitive inhabitants of the planet Nibiru in order to save them, and Spock, from a cataclysmic volcanic eruption. Admiral Christopher Pike is reinstated as commanding officer with Kirk demoted to the rank of Commander and first officer. Commander Spock is transferred to another ship. Shortly after, the Section 31 installation in London is bombed, perpetrated by the renegade Starfleet operative John Harrison (Cumberbatch). Harrison then attacks Starfleet Headquarters in a jumpship during the emergency meeting about the situation, killing Pike and other senior officers. Kirk disables the jumpship, but Harrison escapes by transporting to Kronos, the homeworld of the hostile Klingons.

Admiral Alexander Marcus (Peter Weller) reinstates Kirk and Spock to the Enterprise with orders to kill Harrison. Chief Engineer Montgomery Scott strongly objects to allowing untested torpedoes on board the ship, and when ordered to allow them resigns his commission in protest. Kirk assigns Pavel Chekov to replace Scotty. En route to Kronos, the Enterprise’s warp capabilities mysteriously become disabled. Kirk leads a team with Spock and Uhura onto the planet, where they are ambushed by Klingon patrols. Harrison dispatches the Klingons, then surrenders after learning the number of torpedoes aboard the Enterprise.

Dr. Leonard McCoy and Marcus’s daughter, Dr. Carol Marcus (Alice Eve), open a torpedo at Harrison’s behest. Inside is a man in cryogenic stasis. Every torpedo aboard Enterprise contains a human in stasis. Harrison reveals his true identity as Khan Noonien Singh, a genetically engineered superhuman awakened by Admiral Marcus from centuries of suspended animation to develop advanced weapons of war against the Klingon Empire. Khan reveals that Marcus had sabotaged the Enterprise’s warp drive, intending for the Klingons to destroy the ship after it fired on Kronos, creating an act of war by the Klingon Empire. Khan also gives Kirk a set of coordinates. Kirk contacts Scotty on Earth and asks him to investigate. Scotty discovers they lead to a covert Starfleet facility near Jupiter.

The Enterprise is intercepted by a much larger Federation warship, the USS Vengeance, commanded by Admiral Marcus. Marcus demands that Kirk deliver Khan, but the Enterprise, with a hastily repaired warp drive, flees to Earth to expose Marcus. After the Vengeance intercepts and disables the Enterprise near the Moon, Kirk reveals Carol’s presence aboard the ship. Marcus forcibly transports Carol to the Vengeance before ordering the Enterprise’s destruction, Kirk offers Khan and himself for the lives of his crew, but Marcus rejects Kirk’s offer and orders Vengeance to fire when ready. However, Vengeance suddenly loses power, sabotaged by Scotty, who infiltrated the ship. With transporters down, Kirk and Khan, with the latter’s knowledge of the warship’s design, space-jump to the Vengeance. Spock contacts his older self, who warns that Khan is ruthless and untrustworthy, and, in another reality, Khan was only defeated at a terrible cost. Meanwhile, after capturing the bridge, Khan overpowers Kirk, Scott, and Carol, kills Marcus, and seizes control of the Vengeance.

Khan demands that Spock return his crew sealed in the cryogenic tubes in exchange for the Enterprise officers. Spock complies but surreptitiously removes Khan’s frozen crew and arms the warheads. Khan beams Kirk, Scott, and Carol back aboard the Enterprise, but betrays their agreement by critically damaging the Enterprise; however, the Vengeance is disabled when the torpedoes detonate. With both starships caught in Earth’s gravity, they plummet toward the surface. Kirk enters the radioactive reactor chamber to realign the warp core, saving the ship, but losing his life in the process.

Khan crashes the dying Vengeance into downtown San Francisco in an attempt to destroy Starfleet headquarters, destroying some of the city. Khan escapes the wreckage as Spock transports down in pursuit. McCoy discovers that Khan’s blood has regenerative properties that may save Kirk. With Uhura’s help, Spock chases down and eventually subdues Khan, who is consequently arrested and re-frozen, and Kirk is revived.

Nearly one year later, Kirk speaks at the Enterprise’s re-dedication ceremony. Khan is sealed in his cryogenic pod and stored with his compatriots. The Enterprise crew embarks on a five-year exploratory mission.I didn’t overly mind that the film is based on Khan, but I can understand how some people would have an issue with it. The first film so cleverly re-wrote the shows history and gave Abrams the opportunity to do whatever he wanted story wise so it was a little bit surprising to see he had embarked on somewhat of a `re-make.’ But all in all a very good film. Great action sequences and great CGI – even if you’re not a Trekkie this is still an enjoyable film.