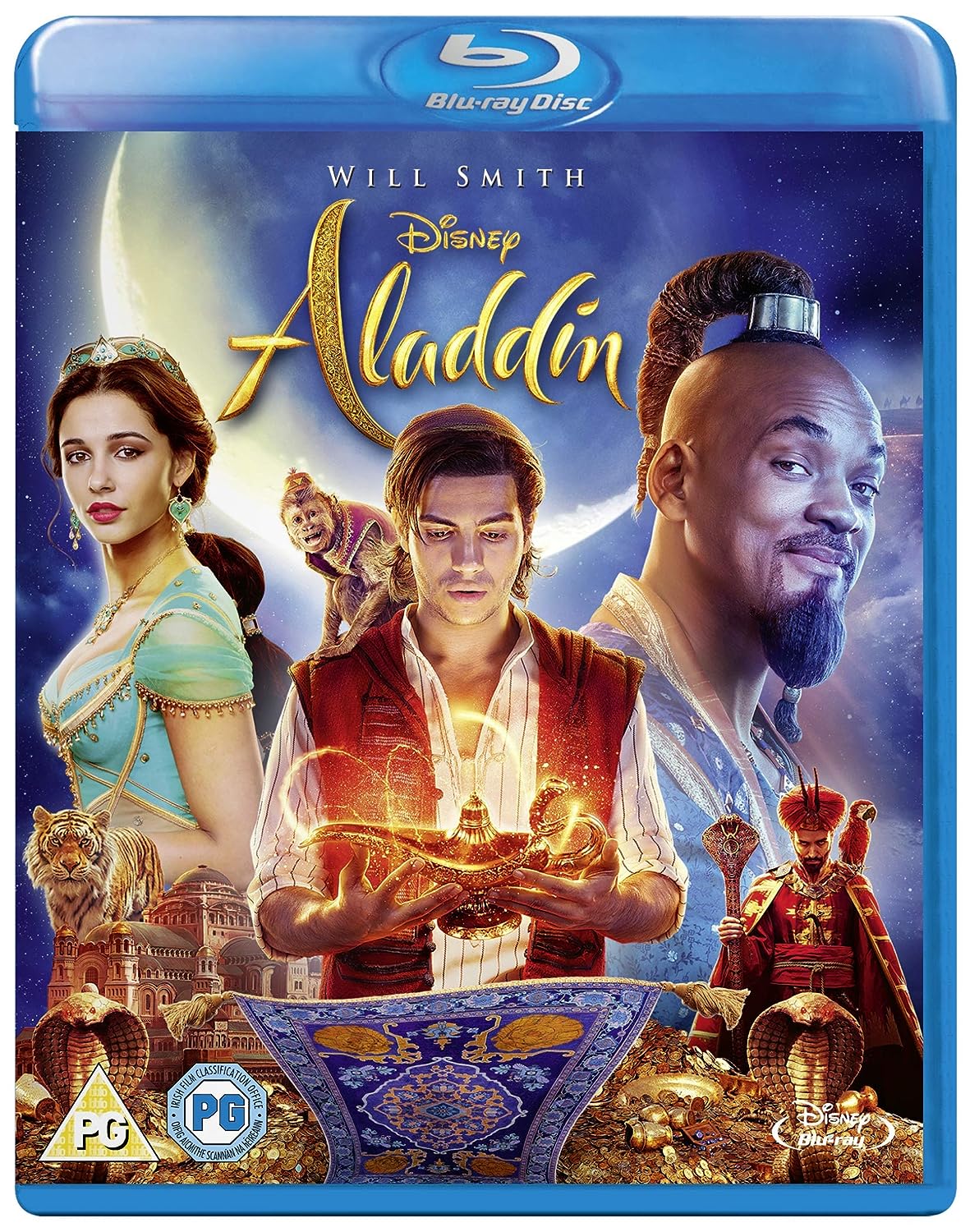 Aladdin, a kind-hearted street urchin living in the Arabian city of Agrabah along with his pet monkey Abu, rescues and befriends Princess Jasmine, who has snuck out of the palace to explore, tired of her sheltered life. Meanwhile, the grand vizier, Jafar schemes to overthrow Jasmine’s father as the Sultan. He, along with his pet parrot sidekick Iago, seeks a magic lamp hidden in the Cave of Wonders that will grant him three wishes. Only one person is worthy to enter: “the diamond in the rough”, whom he decides is Aladdin. Aladdin is captured and Jafar persuades him to retrieve the lamp. Inside the cave, Aladdin finds a magic carpet and obtains the lamp. He gives it to Jafar, who double crosses him and throws him back into the cave, though Abu steals the lamp back. Trapped in the cave, Aladdin rubs the lamp, unwittingly summoning an omnipotent Genie, who lives inside it. Genie explains that he has the power to grant Aladdin three wishes. Aladdin tricks Genie into freeing them from the cave without using a wish. After they get out of the cave, Aladdin uses his first official wish to become a prince to impress Jasmine, and promises to use his third wish to free Genie from servitude. Aladdin enters Agrabah as Prince Ali of Ababwa, arriving in an extravagant spectacle—including Abu, whom Genie has transformed into an elephant. However, Jasmine is unimpressed by his first presentation, including an assortment of gifts and jams. The two later bond when he takes her on a ride on the magic carpet to show her the world she wants to see while Genie goes out with Jasmine’s handmaiden Dalia. When Jasmine tricks Aladdin into revealing his true identity, he convinces her that he is actually a prince and only dressed like a peasant to meet the citizens of Agrabah beforehand. Jafar discovers Aladdin’s identity and to test his theory, throws Aladdin into the sea. Aladdin loses consciousness and awakens having been saved by Genie, at the cost of his second wish. They then expose Jafar, who is arrested and imprisoned in the dungeon. The Sultan offers Aladdin the position as heir to the throne. Fearing he will lose Jasmine if the truth is revealed, Aladdin needs Genie with him now and refuses to free him, much to Genie’s disappointment. Iago snatches one of the guards’ keys and he frees Jafar. Jafar stealthily steals the lamp from Aladdin and becomes Genie’s new master. He uses his first two wishes to become Sultan and then to become the world’s most powerful sorcerer, imprisoning the guards and Jasmine’s pet tiger Rajah. He then exposes Aladdin’s identity to Jasmine and exiles him and Abu to a frozen wasteland. He threatens to kill the Sultan and Dalia unless she agrees to marry him. At the wedding ceremony, Aladdin and Abu return, having been rescued by the magic carpet and Jasmine steals back the lamp. Furious, Jafar transforms Iago into a roc to give chase and overpowers them.Aladdin stalls by taunting Jafar for being second only to Genie in terms of raw power, thereby tricking him into using his last wish to become the most powerful being in the universe. Due to the grey area in that wish, Genie is free to interpret it as he wishes and turns Jafar into a genie himself. Being chained to the lamp without a master, Jafar gets trapped inside, dragging Iago inside with him. Genie throws Jafar’s lamp to the Cave of Wonders and Aladdin keeps his promise, using his last wish to free Genie and turn him human. The Sultan declares that Jasmine will be the next ruler and tells her that Aladdin is a good person, outlines how worthy he is and tells her as Sultan, she can overturn the law that requires her to marry a prince. Jasmine follows Aladdin to the outside of the palace where she “orders him” to come and face the Sultan, she and Aladdin then share a passionate kiss. Genie marries Dalia and leaves to explore the world and start a family with her. Aladdin and Jasmine get married and start a new life.I know everyone wants to compare this to the Animated version, but don’t. Take it as it comes and you will thoroughly enjoy it. It does stay pretty faithful to the animated version I think. Will Smith as the genie could never be the Robin Williams genie, but I don’t think he tries to. He does fantastically well in his own right.  think kids will love this and I would definitely recommend it. 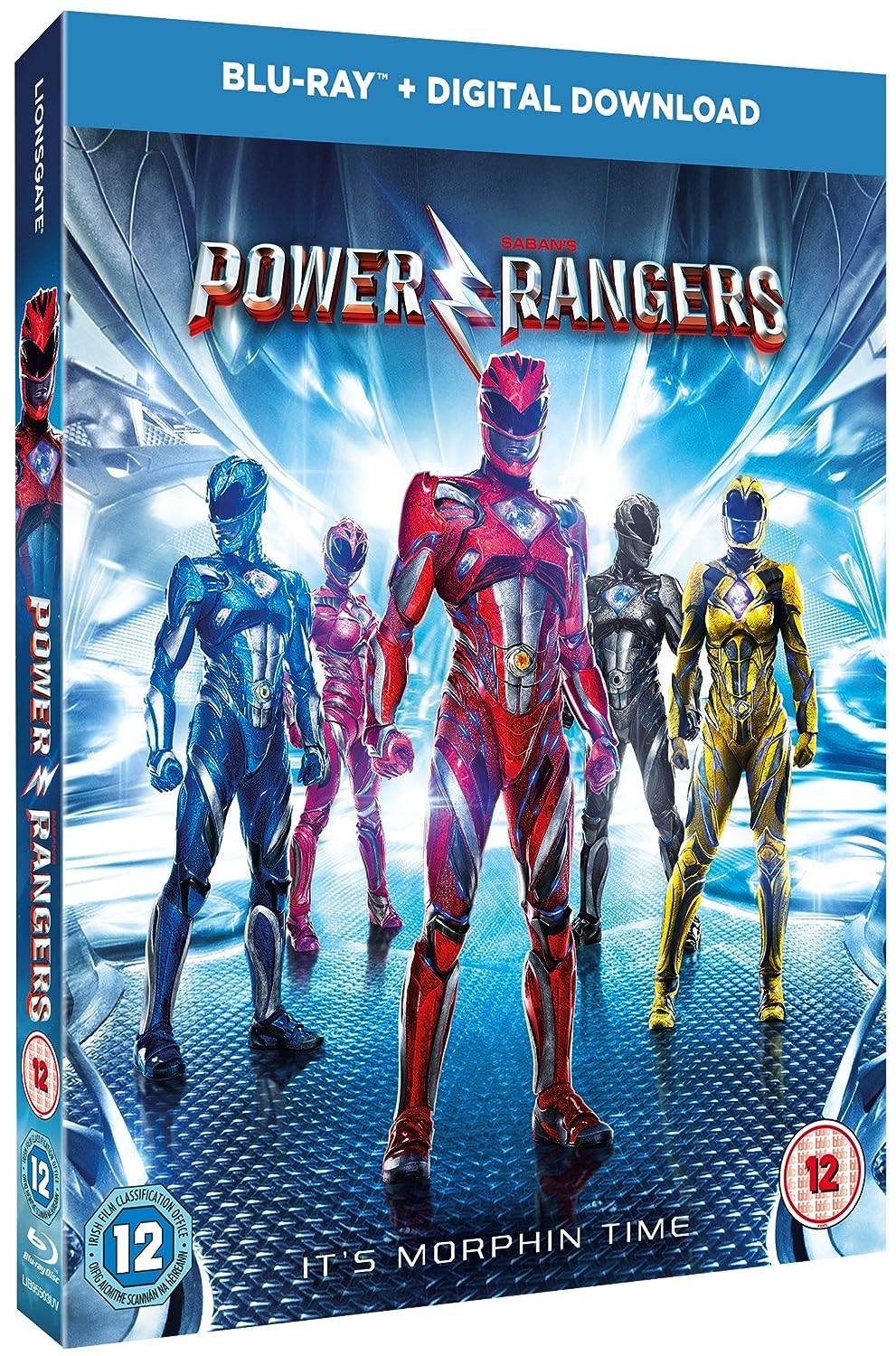 Twenty years after the last Power Rangers theatrical release, the sci-fi series returns with an updated visual style and reconfigured storyline, as the Saban Entertainment property moves from 20th Century Fox to Lionsgate. Unlike the TV program (still running after 24 seasons), the feature films faded away after 1997’s Turbo: A Power Rangers Movie, the follow-up to Mighty Morphin Power Rangers: The Movie, released two years earlier.
This version creatively reimagines the Power Rangers’ origins by establishing them as a team of intergalactic protectors, which certainly provides a high degree of flexibility for potential future iterations. Its worldwide appeal should assure satisfactory initial results.

An opening flashback reveals that the original Power Rangers were actually humanoid-like extraterrestrials, arriving on earth millions of years ago as Zordon (Bryan Cranston) and his team of Rangers attempted to defend the planet from power-hungry alien invader Rita Repulsa (Elizabeth Banks). When an errant meteor strikes, Zordon’s Rangers are all killed and he almost perishes before his loyal robot assistant Alpha 5 (Bill Hader) saves him by uploading his consciousness into their spacecraft’s computer system, while Rita’s body is consigned to the depths of the ocean. Digitally imprisoned within the ship indefinitely, Zordon will have to wait until the power coins that enable the development of Ranger superpowers are discovered sometime in the distant future before he can be freed.More than 60 million years later, a decrepit gold mine outside the rural California town of Angel Grove attracts the attention of outcast teen tech-whiz Billy (RJ Cyler), who’s focused on a project started by his late father to unearth a mysterious energy source within the mountainside. Billy gets some unexpected assistance from disgraced football star Jason (Dacre Montgomery), who needs his help hacking the tracking anklet the local police department forces him to wear after he’s apprehended for staging a disastrous high school prank. It turns out that some other marginalized teens are also drawn to the mountain, including bad boy Zack (Ludi Lin), ostracized cheerleader Kimberly (Naomi Scott) and (in one of the first representations of an LGBTQ superhero character) gay-questioning Trini (Becky G).
After Billy’s homemade explosive device blows away the wall of the mine, they discover the buried power coins and quickly begin developing unexpected super-abilities, including incredible strength and agility. It’s not until they discover Zordon’s buried spaceship and encounter Alpha 5, however, that they begin to understand their anointed role as Zordon’s next team of Power Rangers. As the kids struggle to control their newfound talents, the revival of Rita from deep beneath the ocean snaps their situation into sharp focus when she arrives in Angel Grove seeking Zordon and begins destroying the town. If the Rangers can’t find a way to come together and form a cohesive team, they’ll never be able to defeat Rita and save the world from her destructive ambitions.
For longtime fans, the newest installment preserves some of the most beloved characteristics of the original franchise, updated to reflect technological advances. The Rangers’ color-coded power suits now benefit from nanoparticle properties and the robotic mecha assault vehicles known as Zords that they pilot take on enhanced battle capabilities, while Rita’s menacing sidekicks the Putties and the gigantic warrior Goldar get more polished, fluid CGI representations. (And yes, the “Go Go Power Rangers” theme song makes a triumphant return.)

Screenwriter John Gatins succeeds in effectively distilling the Power Rangers’ sprawling mythology into a manageable scope and dialing back the campy humor and martial arts fixations that characterized the TV series and liberally informed the feature films. The current version instead emphasizes more realistic dramatic situations by imbuing each Ranger with some type of personal issue. Whether they’re dealing with bullying, alienation or sexual orientation, these teens are more three-dimensional than their Ranger predecessors.Standing out in a field of largely emerging young talent, Cyler (Me and Earl and the Dying Girl) strikes a heartfelt balance between Billy’s obsessive and creative tendencies, playing them against one another for both humor and emotional impact. Cranston as the pompous alien with unrealistic expectations and Hader as the ever-optimistic robot form a resourceful if unexpected comedic team, but can’t quite match Banks for Rita’s sheer delightfulness , she is having fun and it shows oin the big screen.Israelite, building on his experience with teen sci-fi feature Project Almanac, orchestrates a vastly more complex array of characters, action set pieces and technical resources for a combined effect that maintains dramatic tension. CGI characters and special effects sequences by Weta Workshop are seamlessly integrated and consistently thrilling. This is a brilliant retelling the classic story for a new age.