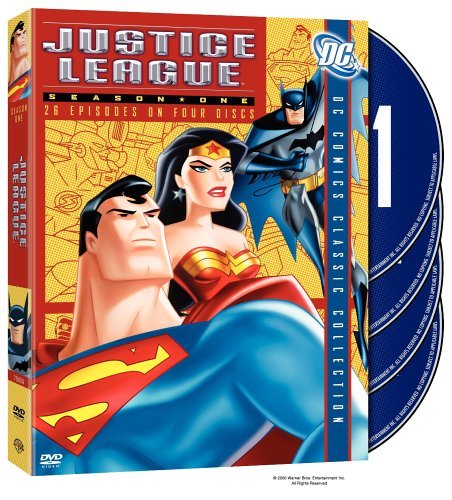 They’re the rockstars of the DC universe and they’re a heck of a lot of fun to be around. Giant robot rampaging through the city and Superman alone can’t stop it? Insidious villain plotting to invade the world with an army of zombies and the task is too much for Wonder Woman? Puzzling crime-spree that Batman can’t – er, wait. Strike that last one. Given enough time, Batman can do just about anything. Even so, when the world is in dire need of saving, it’s a job for the Justice League.

This series is the culmination of nearly ten years of animation continuity headed up by animation producer Bruce Timm and friends. It’s very rare for a consistent creative team to play around in what is essentially the same sandbox for so long. From the writers to the directors to the voice actors – Kevin Conroy has been voicing Batman for over ten years now – Justice League is the spiritual conclusion to the DC animated universe that Batman: The Animated Series helped kick off way back in 1992.

The creative team has taken everything they’ve learned in their previous shows (Batman: The Animated Series, Superman: The Animated Series and Batman Beyond) and brought it to the next level. Justice League features seven main heroes and a host of villains. If that wasn’t enough, in its later seasons the series would expand its roster to include virtually the entire DC comic book universe.

Obviously, since the show features the world’s greatest superheroes, you’ve got to come up with some pretty challenging foes for them to face. At the same time you’ve got to ensure that the characters maintain unique personas and don’t step over each other’s ground. This is not an easy task, especially when confined to the constraints of a kids’ show. The greatest weakness of the first season is the show’s inability to keep its characters distinct and interesting at the same time. Sure, it’s easy making Batman cool – and it never gets old – but its somewhat more difficult peeling the other characters apart. For example, Superman and Hawkgirl seem to be identical characters in terms of functionality. They both fly, are very strong, and can tear things apart. The only difference is that Hawkgirl uses a mace.

The best way to keep characters with overlapping powers interesting is to develop them as individuals. Sadly, the show’s first season seems more interested in flashy action than character development. Wonder Woman, Green Lantern, and J’onn J’onzz get some great moments, but The Flash, Superman, and Hawkgirl are left out in the cold. My personal pet peeve this season is that Superman gets dumbed down to the point of uselessness. Bruce Timm admits in the extras that they thought having Superman get beaten up so often would make their villains look even scarier. After all, if something can take down Superman it’s got to be tough. However, after a while Superman gets beat up so often that the “Super” is sapped out of him. If you see anything electrical it’s a guarantee that it will shock ol’ Supes and put him out of action. If you’re willing to forgive a few missteps (I certainly was) then you’ve got a real treat in store for yourself.

In a wise move by the show’s producers, the first season (along with the second) is divided into a series of two-part episodes. This gives the show forty-four minute episodes in which to tell more complicated stories than would be possible in the standard twenty-two minutes. The result is a four disc set packed with high-flying superhero fun. From Injustice For All, where our heroes battle an evil society headed-up by a terminally diagnosed Lex Luthor, to The Enemy Below, where the League team up with Aquaman, this entire boxed set is full of great action and enjoyable comic book storytelling.

If you’re willing to forgive some unbalanced character development then you’ll have a great time with this first season. Justice League is a very entertaining show that any fan of superhero animation should not be without. These guys were the world’s first superhero team and they set the template for everyone that came after. They were the best then, and thanks to this show, they’re the still the best today.